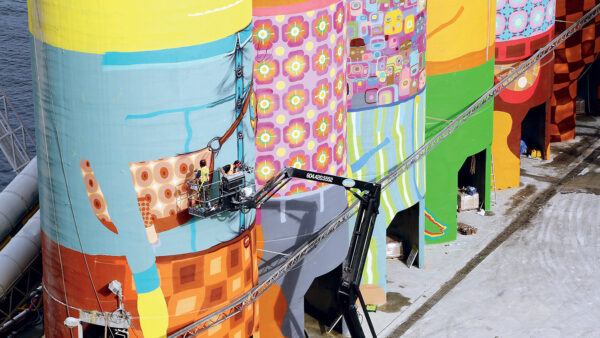 In 2014, the Vancouver Biennale brought Osgemeos, the internationally acclaimed graffiti artists and twins, to work their magic on six cement silos on Granville Island, adorning them with their unforgettable giants. In this story from our archives and the accompanying video, we meet the brothers and get a behind-the-scenes peek at their art and their shared language of creativity.

In literature, South America is known around the world for magic realism. Luminaries such as the Argentine author Jorge Luis Borges and Colombian novelist Gabriel García Márquez redefined the genre throughout the 20th century, writing stories where surreal and sublime stirrings recur subtly in normal, everyday life. Now it’s Brazil’s turn, but instead of literature, its magic-infused realities are manifested in the imaginative artwork of OSGEMEOS, a tag-team of innovative, internationally-acclaimed graffiti artists who are also identical twin brothers. But it is not so much their murals that merge magic and reality; after all, their vivid visuals are anything but realistic, with colourful, highly-stylised characters whose vivacious emotions are matched by environments where everything from hats and shoes to balloons and boats are conferred with sentience and sensibility. What is simultaneously real and magical about these works is their context as street art, where ordinary people going about their ordinary business can suddenly chance upon one of OSGEMEOS’s uncanny, festive, and often mind-boggling paintings, and immediately feel their everyday world collide with, and dissolve into, realms of endless imagination. 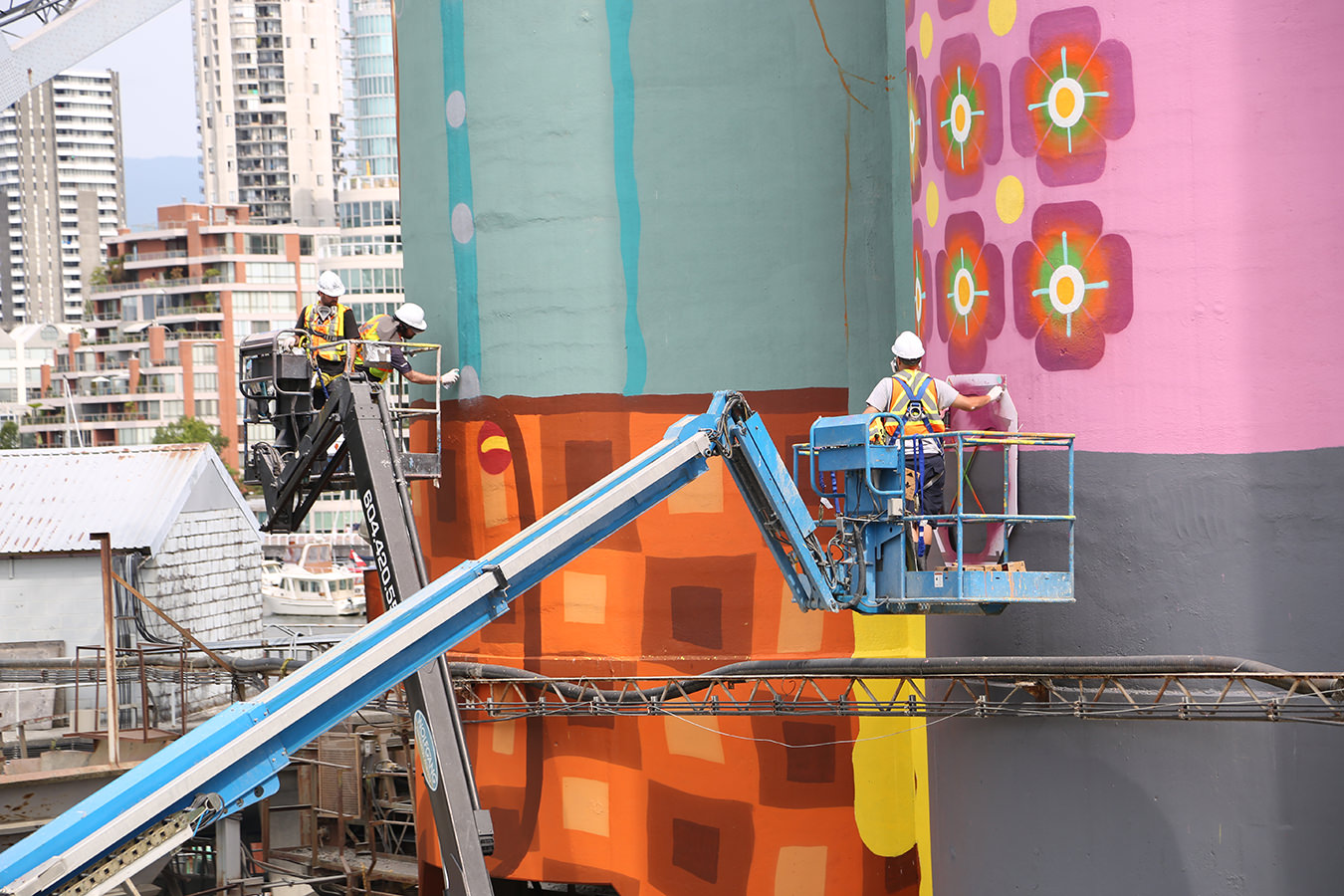 For OSGEMEOS, “magical” describes many things, some of which defy conventional definition. “Being twins is very magical,” says Otavio Pandolfo reflectively, sitting opposite his brother, Gustavo. “It’s very weird, in a nice way, because to do the same drawings, and to discover the same things, is very natural for us, and we don’t know how to explain how it is to be like that.” The twins have always worked as a pair in their artistic practice, and their title, os gêmeos, is Portuguese for “the twins.” Otavio and Gustavo will always remember how they answered their artistic calling as children in the 1980s, living with their mother in São Paolo, Brazil. “We always played in the streets; we liked to be in the streets the whole day,” reminisces Otavio. “The ‘80s was a very special, magical time. It was very different than now. It was the time that we discovered things. There was no iPhone, none of these things, so you had to find ways to play, to find ways to have fun.” In the absence of modern technology’s games, gimmicks, and instant gratifications, the twins grew their minds and awakened their talent for drawing. “We discovered this when we were three or four years old, that drawings, for us, was the best way to communicate with family, or to talk with each other,” recounts Otavio. “We are twin brothers, univitelino. We have this language of drawings to communicate with each other. We don’t know how to explain why we have this language.” Over time, this hobby would give life to today’s OSGEMEOS, as they are now known worldwide. 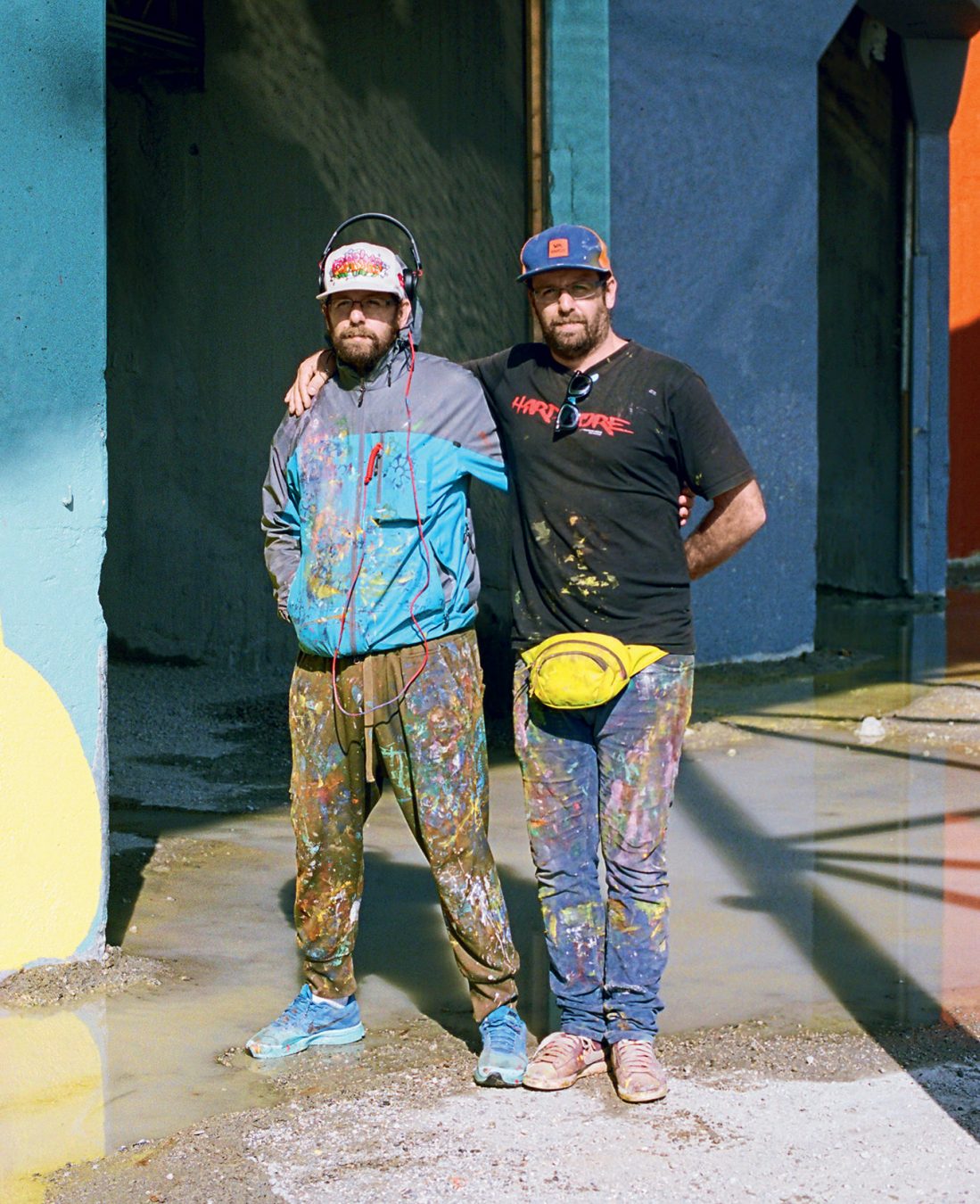 And there is a magic intrinsic to the twins themselves: as individuals, the brothers are good-natured, genuine, and generally soft-spoken; but as OSGEMEOS it is as if the brothers fuse together into an indivisible identity, operating as a synchronised singularity that borders on mystical. How could two people function so purposely as one? All identical twins begin as one being, and it is almost as though Otavio and Gustavo are able to relapse into this state by their own volition. When asked if they ever suffer from creative differences, they exchange expressions of confusion and seek clarification; when asked if they can distinguish their individual contributions to a finished artwork, they insist that they cannot. It’s a fascinating dynamic that’s stranger than fiction, even for the likes of monozygotic, or univitelino, twins.

OSGEMEOS has exhibited all over the globe, everywhere from high-end galleries to outdoor spaces; and as of August 2014, they are painting what is perhaps their most ambitious graffiti mural to date at Granville Island, in Vancouver. The venue is Ocean Concrete, where its six cylindrical cement silos span 21 metres in height and more than 7,000 square metres in surface area, and are visible from the Granville Street Bridge and all along False Creek. OSGEMEOS plans to monumentally transform the site into a compelling work of public art, as part of the Vancouver Biennale. “It will be the biggest mural we’ve ever done,” remarks Gustavo. Barrie Mowatt, the president and founder of the Vancouver Biennale toured the twins through Vancouver last year, scouring the streets for a suitable façade. Finding a paintable surface in this city of glass was difficult, but upon seeing the silos, inspiration struck OSGEMEOS. It seemed an ideal venue, except that this so-called public space was, in fact, not public at all. “It scared the hell out of us, because it was private property,” says Mowatt of the site. “But we had the first meeting, they [Ocean Concrete] said yes.” Mowatt’s satisfied smile says it all. “So it’s a tribute to these guys and a tribute to their ability.” 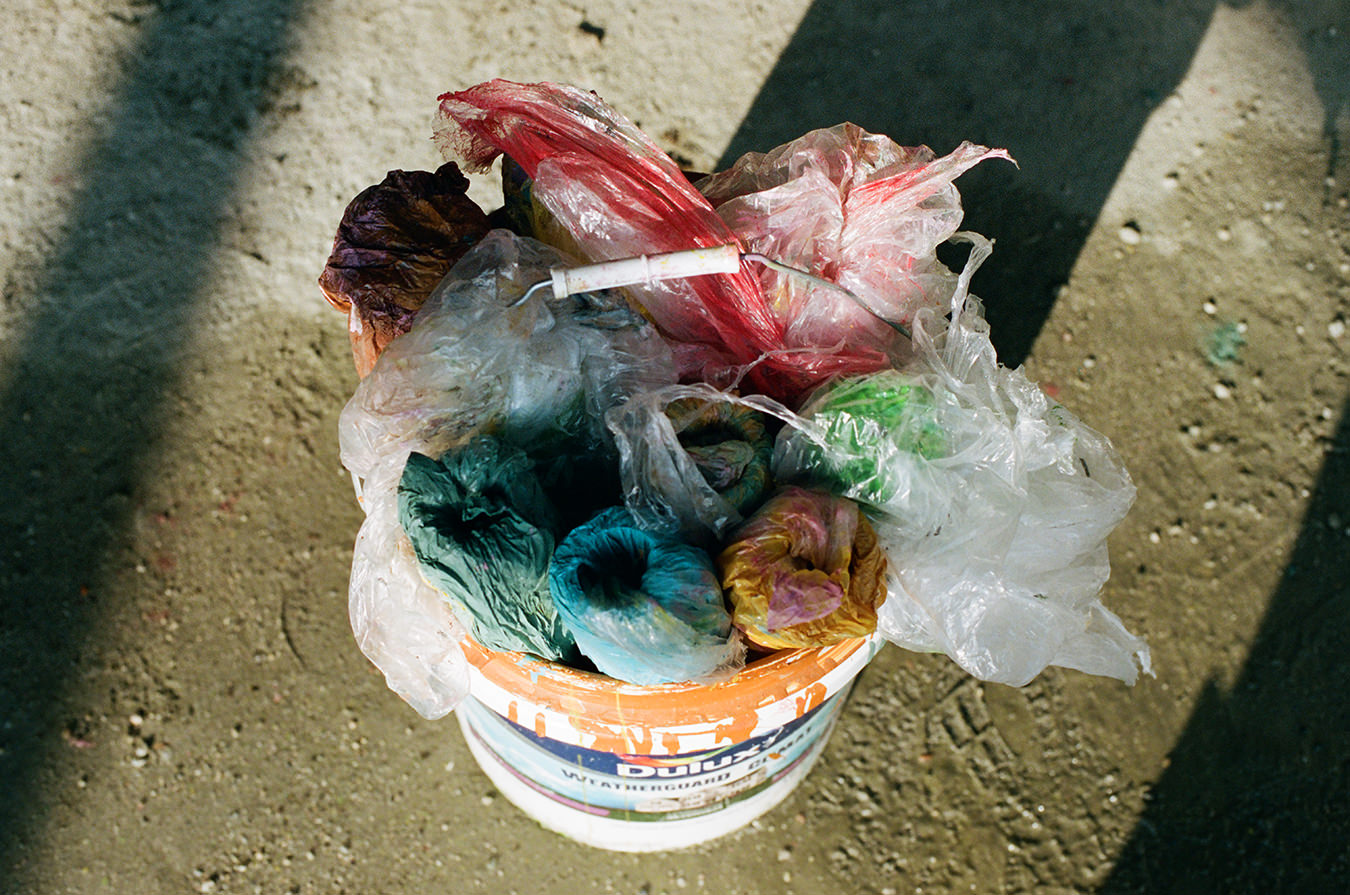 Among these aforementioned abilities is OSGEMEOS’s capacity to draft their murals in small-scale format, and then mount them large-scale on walls, by hand, without using any projections or scale-factors. This is how OSGEMEOS has completed their Giants series, an international collection of titanic characters that intervene in, and sometimes seem to interact with, the city streets that they have inhabited. OSGEMEOS has been creating these fantastic giants all across the globe, and of course, when asked how they manage to translate their concept sketches into massive graffiti murals, they grin and insist “It’s magic.”

And to a degree, it is magic. The work of OSGEMEOS is infused with a profound, incipient spirituality that prioritizes organic feelings and natural intuitions over logic, and perhaps this gives them the grit they need to embark on such epic endeavours. Their style and technique developed during the early 1990s, when Otavio and Gustavo took four years to evolve, explore, and express themselves as artists. “We finished high school, and then we decided to not do university,” explains Otavio. “We shared a room in our mother’s house, and we changed it to a studio. And then we said ‘This is going to be our university.’ ” And as they worked, they indulged and interrogated their personal interests, asking themselves “Why drawing? Why painting? What is our mission here, on this planet?” Among the many amazing revelations to materialize at this time was the recurring golden flesh featured on OSGEMEOS’s figures, which occurred to both brothers at once. “It was very spiritual for us, when we discovered that. We were drawing and meditating at the same time, and it just came,” Otavio remembers. “It came from the window. Everything became yellow; it was like a vision,” adds Gustavo. “It was a yellow afternoon.” Once again, the twins affirm how little glints and glistenings of magic are able to work their way into lived reality, quietly gilding everyday life, and are accessible to anyone open-minded and free-spirited enough to take heed of them.

“When we discovered graffiti, and this kind of expression, we used this like a key to discover the city … We try to observe as much as we can … put it in our work, and give it back to the people.”

“In 1999, we started to really travel, and we wanted to bring a taste of Brazil to the cities that we were going to,” says Otavio. In all their globetrotting, the twins have realised that there truly is no place like home; the aesthetics of South America are incredibly unique, and OSGEMEOS is determined to share this with the world. “I think to do a project like we’re doing here [in Vancouver], it is kind of an exchange. At the same time you bring something very special to the city, you also learn a lot from the city.” For OSGEMEOS, street art acted as a catalyst for geopolitical inquiry, both at home and abroad. “When we discovered graffiti, and this kind of expression, we used this like a key to discover the city, and to discover how the city is ‘made’, how the government cares about the city, what the conversation is between the people and the city. We discover the city; we try to observe as much as we can, and then we try to filter all this information, put it in our work, and give it back to the people. We learned this in the streets of São Paolo; and then when we started to travel later, we started to do the same in other cities. And this has become really natural in our lives.” Their munificent philosophy is manifest in the work at hand; neither OSGEMEOS nor the Biennale will profit from this project. The art is a gift to the public, granting people a glimpse into a visionary world of humour, colour, and vigour. Regarding their first impressions of Vancouver, the twins agree that “It’s a very clean city! Very organised. So far as we know, it’s very different than where we come from. The opposite! We come from São Paolo; it’s a crazy city, with graffiti everywhere. In a way it’s nice. But for sure, we feel the difference.” 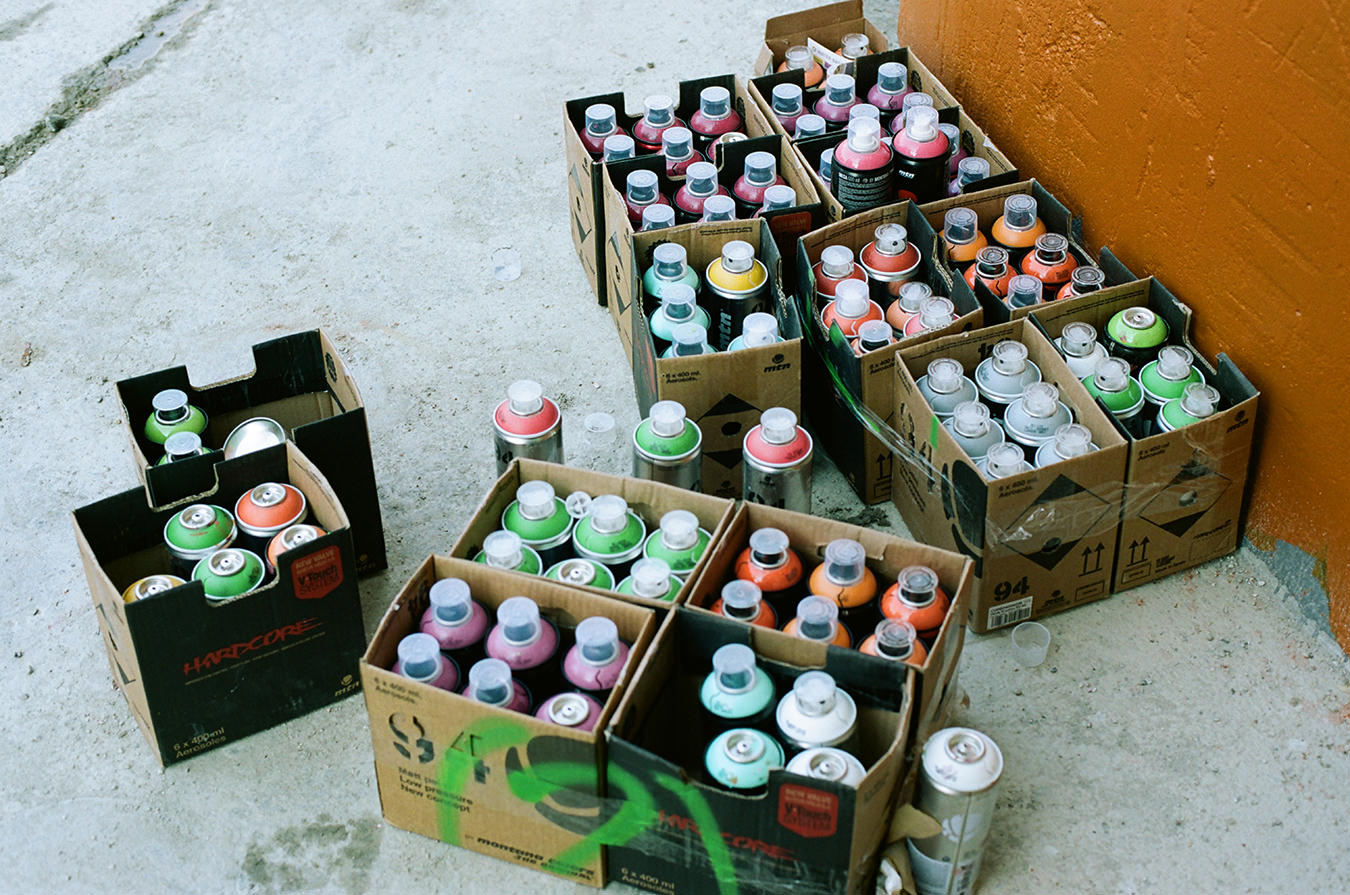 The idea of graffiti giving back to the people, and dialoguing with the urban geography, is intriguing, and OSGEMEOS’s philosophy seems to be permeated by a sort of generous populism; and this is one of the reasons they are looking forward to working at Granville Island, where their process can be seen by passersby throughout False Creek. “It’s important for artists to share what they do with the people in a very true way,” affirms Gustavo. “So what we do is very transparent and very true. It’s good for the people to see the process.” In making their work so accessible, OSGEMEOS shares a new sort of magic realism with their Vancouver viewers, encouraging them to subjectively enjoy and engage with the artwork, and to introduce elements of ecstatic, celebratory creativity into the everyday. “The characters depend on your imagination. This is one of the characteristics of our work, to give this opportunity to the people, to play with imagination, and to create your own histories from what you see.” OSGEMEOS could not have selected a better location for their new painting; their playful, authentic aesthetic is truly becoming for Granville Island, which is itself sort of unfettered utopia in the heart of Vancouver. 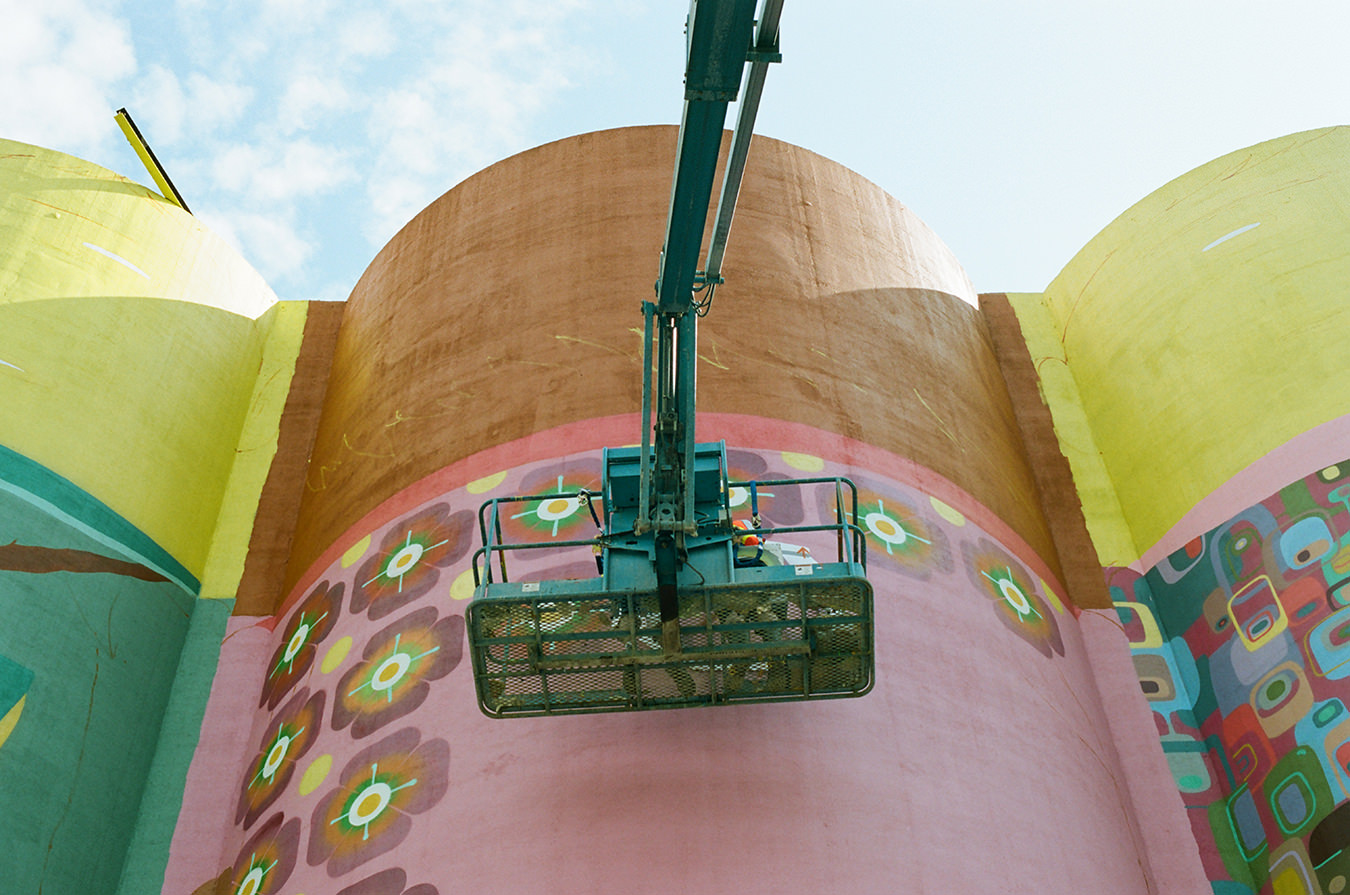 “We need to be open to the people. This is one of the reasons that we love this project, because this is a very different biennale; it’s not like something you see very often. I think it’s a really clever biennale because they use the city in many different ways, and many different formats. And Vancouverites must be very proud to have this here, because you can really see a lot of different things happening in this city.” And with this project, OSGEMEOS are a part of Vancouver. “Now Vancouver is our city too,” they remark. “It’s like opening the gates, and there’s no border and there’s no flag anymore, with a project like this, because art makes one communication, it makes everything become one world.”

This article and accompanying video from our archives was the cover story of our Autumn 2014 issue. Read more in the Arts.