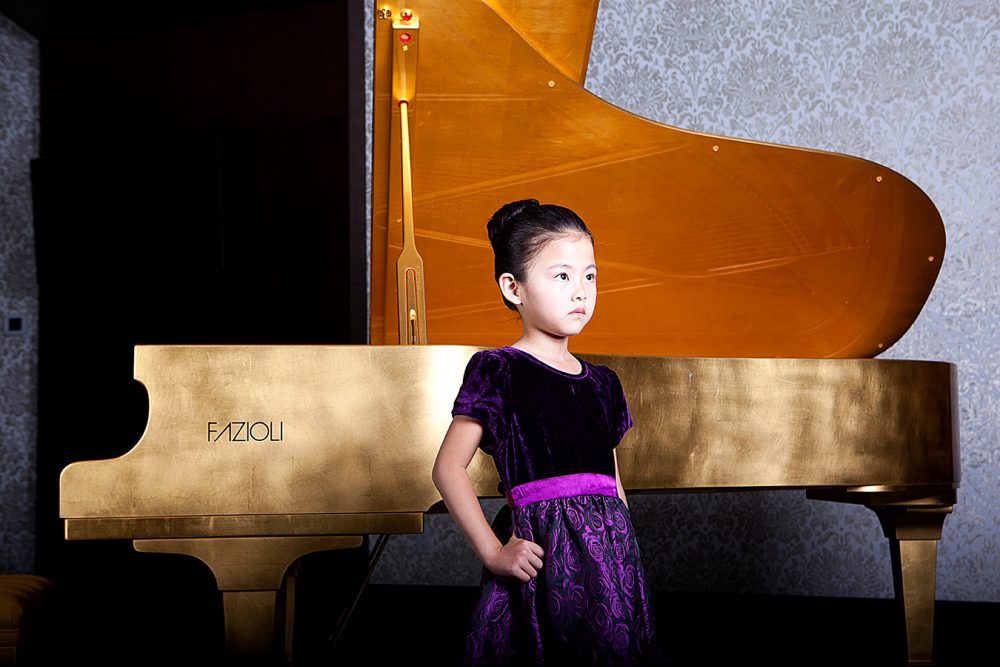 Carefully made by hand in Italy, Fazioli pianos have enchanted pianists and music appreciators worldwide for over three decades. A new creation is especially dazzling: the world’s only 24 karat Gold Leaf Fazioli piano, which will be installed in a private Vancouver home at the end of this month. The luminous F228 Fazioli was conceived to complement a space by interior designer Thu Watson of Il Loft for a client. Several samples of gold paint were considered, but the Gold Leaf finish simply outshone the rest.

The golden touch is fit for a king, so it’s unsurprising that Elvis Presley is among the few who have ever owned such a precious thing. Priscilla Presley had Elvis’s nine-foot Kimball concert grand piano, originally made in 1928, secretly removed from storage and refinished in Gold Leaf, inside and out, by European professionals for their first anniversary. The instrument is currently on sale; in the meantime, it sits on display at the Country Music Hall of Fame in Nashville, Tennessee.

In the 1970s, Kimball was the world’s largest piano manufacturer, making more than 100,000 pianos annually during peak years. However, the big giant burnt out, and the piano and organ subsidiary was closed in 1996. Meanwhile, Fazioli’s story starts small and stays small, with no intention of ever reaching large production levels. Passion is a key ingredient, no doubt, and today, the company’s pianos are among the world’s finest. Paolo Fazioli was born in Rome, 1944, to a family of furniture makers. He graduated from the University of Rome with a degree in mechanical engineering in 1969, and two years later, completed another degree as a pianist at the Conservatory G. Rossini in Pesaro, Italy. His company, Fazioli Pianoforti was formally established in 1981; here, he continues to improve the instrument using cutting edge technology while remaining faithful to time-honoured traditional methods.

The standard Faziolis take a staggering 3,000 hours to create. Between a small team of 40 artisans, only about 100 pianos are completed each year at the factory in Sacile, Italy, an area renowned for its prestigious tradition in woodworking. One can expect to wait a full year for a special order piano.

The Gold Leaf Fazioli, which was flown to Vancouver from Italy, is currently on display at Showcase Pianos at Aberdeen Centre in Richmond until the end of the month, after which it will be moved to the buyer’s home.