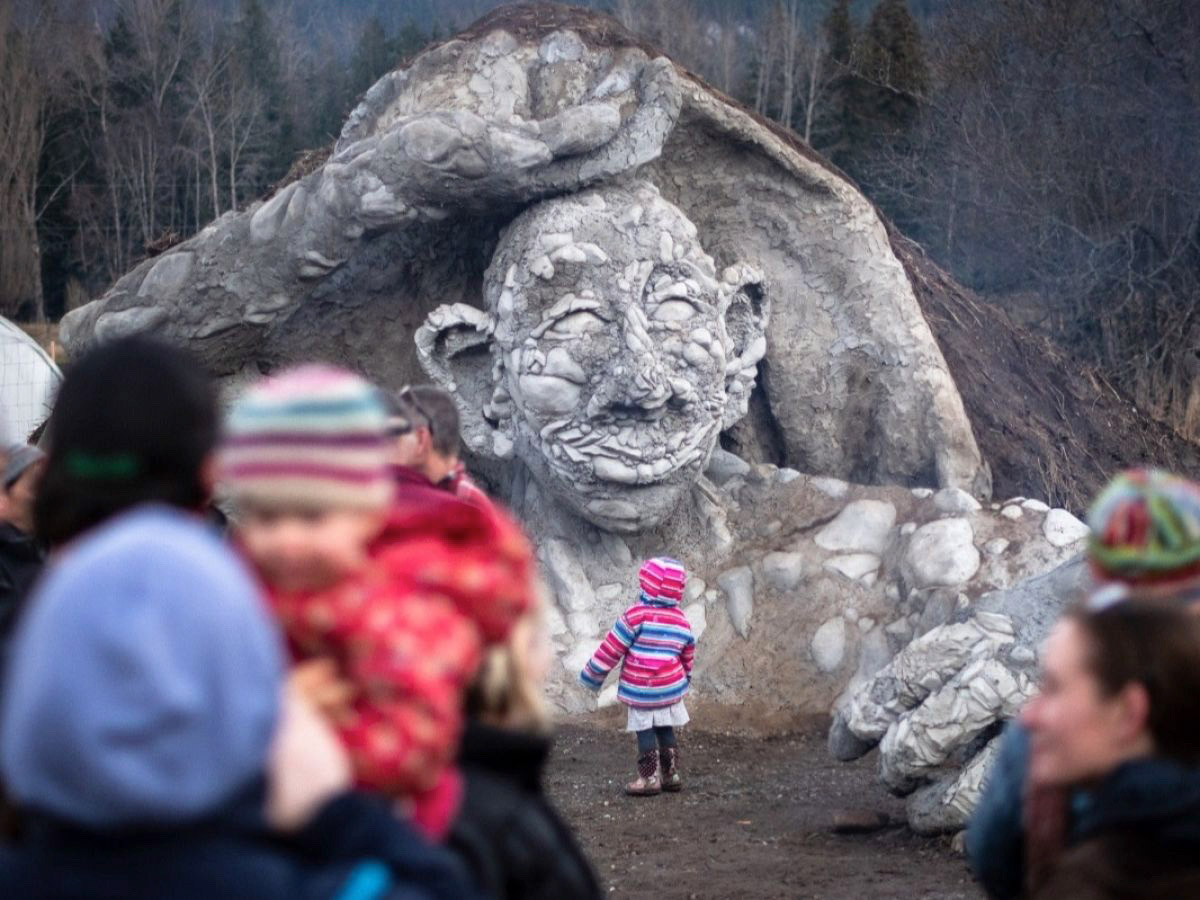 Photo by Louis Bockner/Eye of the Mind Photography.

Leaning on a walking stick, a stone man sits on a bench in the woods, outside the town of Kaslo in British Columbia’s Selkirk Mountains. With a lined face and curly hair, he watches over several larger-than-life children hiding in the forest. One crouches behind a boulder, another peers out above a rock, and a third appears embedded in a moss-covered boulder, holding a finger to its lips as if to say, “Shh, don’t tell anyone where we are.”

Yvonne Boyd, Christopher Petersen, and Spring Shine, who work as the Koots Artist Collective, crafted these fanciful cement Hide and Seek sculptures, concealing them among the trees along the Kaslo River Trail. The artists have placed these eight creatures as part of a series of outdoor artworks in secret and not-so-secret spots throughout the Kootenays, developing what they hope will become a family-friendly Kootenay arts circuit.

In addition to these Kaslo sculptures, the artists have installed two “Koots,” as the trio calls the immense humanoid sculptures, in Castlegar, one in Slocan, and another in Meadow Creek, with plans to extend their sculpture trail throughout the region. They created each piece specifically for its individual setting. 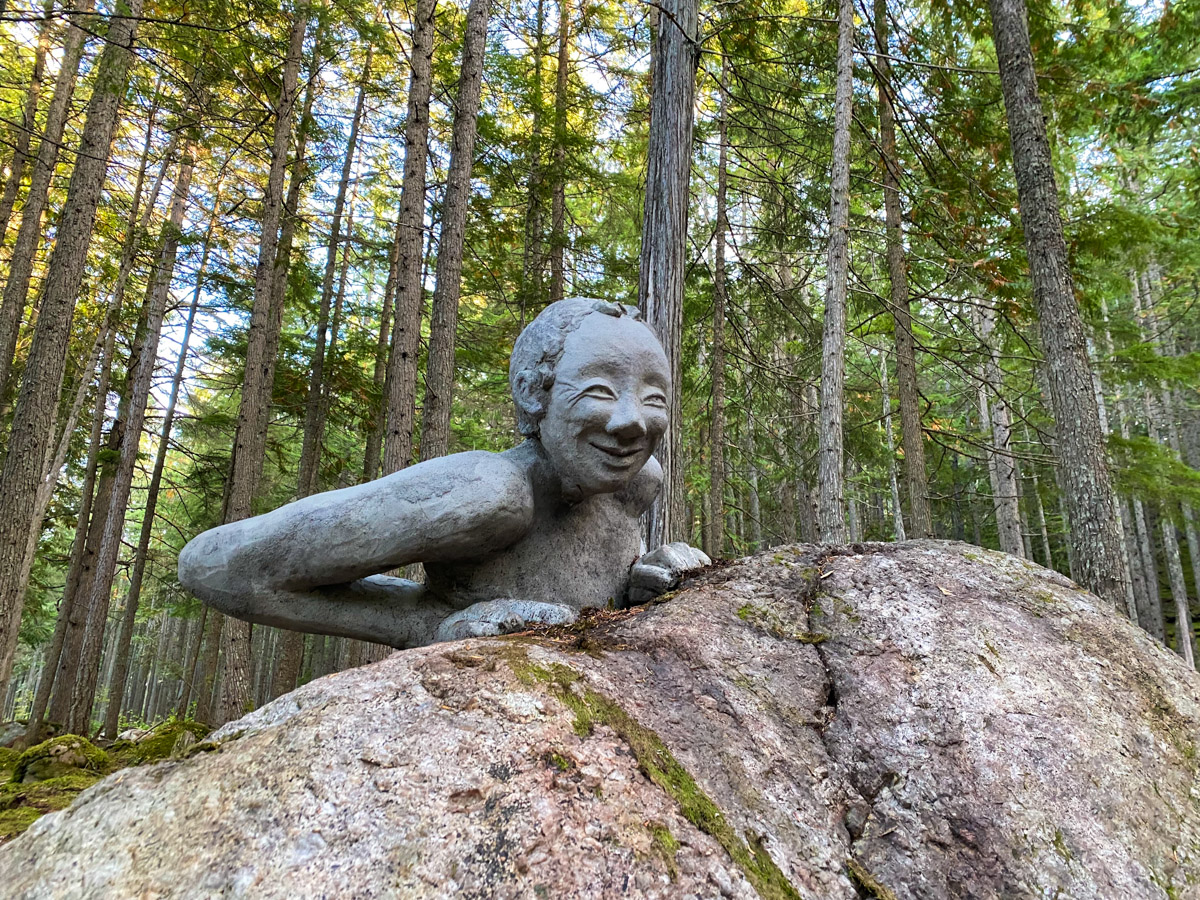 Photo by Carolyn B. Heller.

“With the Koots in Kaslo, we walked around the whole trail looking for an appropriate spot,” Shine explains. “We got to a field of giant boulders, and they were amazing, covered with moss.” The artists began envisioning not one, but multiple sculptures, positioned around the rocks. “What would they be doing here? Well, obviously they’re playing hide and seek.”

This sculpture circuit in progress is a way to get families outdoors and into nature, encouraging them to explore the area while hunting for colossal works of art. Hide and Seek is “a real discovery” for young people, Shine says. “They’re walking around and trying to find all eight of them. It’s an adventure.”

Watching children discover the Koots “is quite delightful,” Boyd adds. “They like to get their pictures taken with them. One day, when it was really cold, somebody put a scarf on one of them.”

Based in Argenta, B.C., on the east side of Kootenay Lake, the three artists each launched independent careers before beginning their collaborations. A sculptor, Petersen works in wood, metal, and concrete, creating both private commissions and public art. With a background in painting as well as sculpture, Boyd built a body painting business, creating ornate designs directly on people’s bodies. Shine, who started out carving wood, found a soapstone quarry near his home, which led him to work in stone and craft increasingly large sculptures. 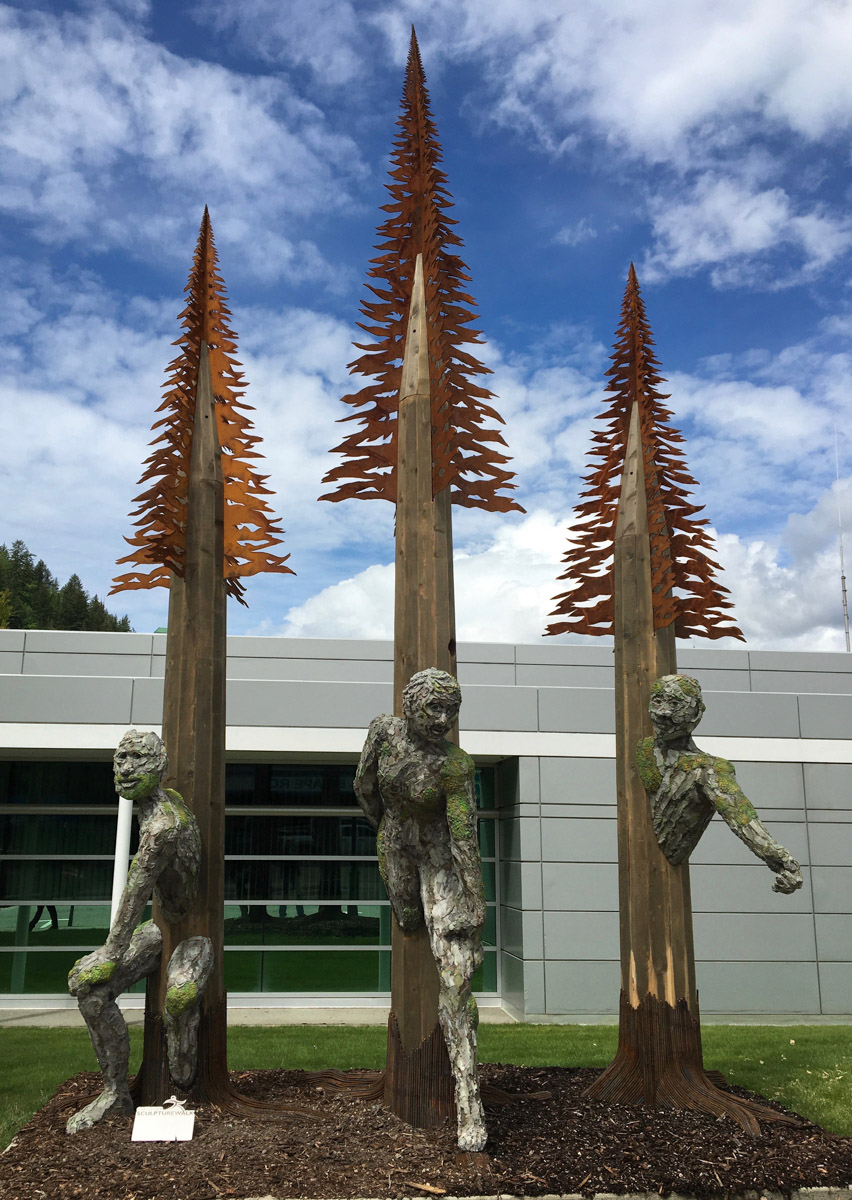 Both Shine and Petersen had submitted works individually to the annual Castlegar Sculpturewalk. Each year, artists from around the Kootenays and farther afield create works for an outdoor sculpture exhibit installed in the city’s downtown, competing for $25,000 in prize money. The “People’s Choice Award” recognizes the most popular sculpture; the winner’s work is purchased and installed permanently in the city.

One day, Shine recalls, when he and Petersen were having a beer together, “I saw some logging cable wound up near a cedar tree. And I said, ‘Look how close the texture of the logging cable is to the bark of the tree. Wouldn’t it be cool to make a giant cedar tree out of logging cable?’”

But Shine didn’t give up on the concept. Not long after, when the two artists saw a giant stump with a nurse tree growing out of it, Shine asked, “What if we made the stump out of logging cable and put a nurse tree on it? And made it hollow, so you can walk in it, and sit down in it on a little bench?” After Petersen responded more favourably, the two began working together on the idea. They created a tree-like sculpture, Regeneration, which won the People’s Choice Award in the 2015 Castlegar Sculpturewalk.

Shine says he had long admired Boyd’s work as well, and several years ago, when he conceived the idea of a Kootenays sculpture circuit, the trio decided to collaborate on the project.

Boyd says that working as a group, “You get way bigger results.” Collectively, they can produce works she says she might not have the courage to do solo. 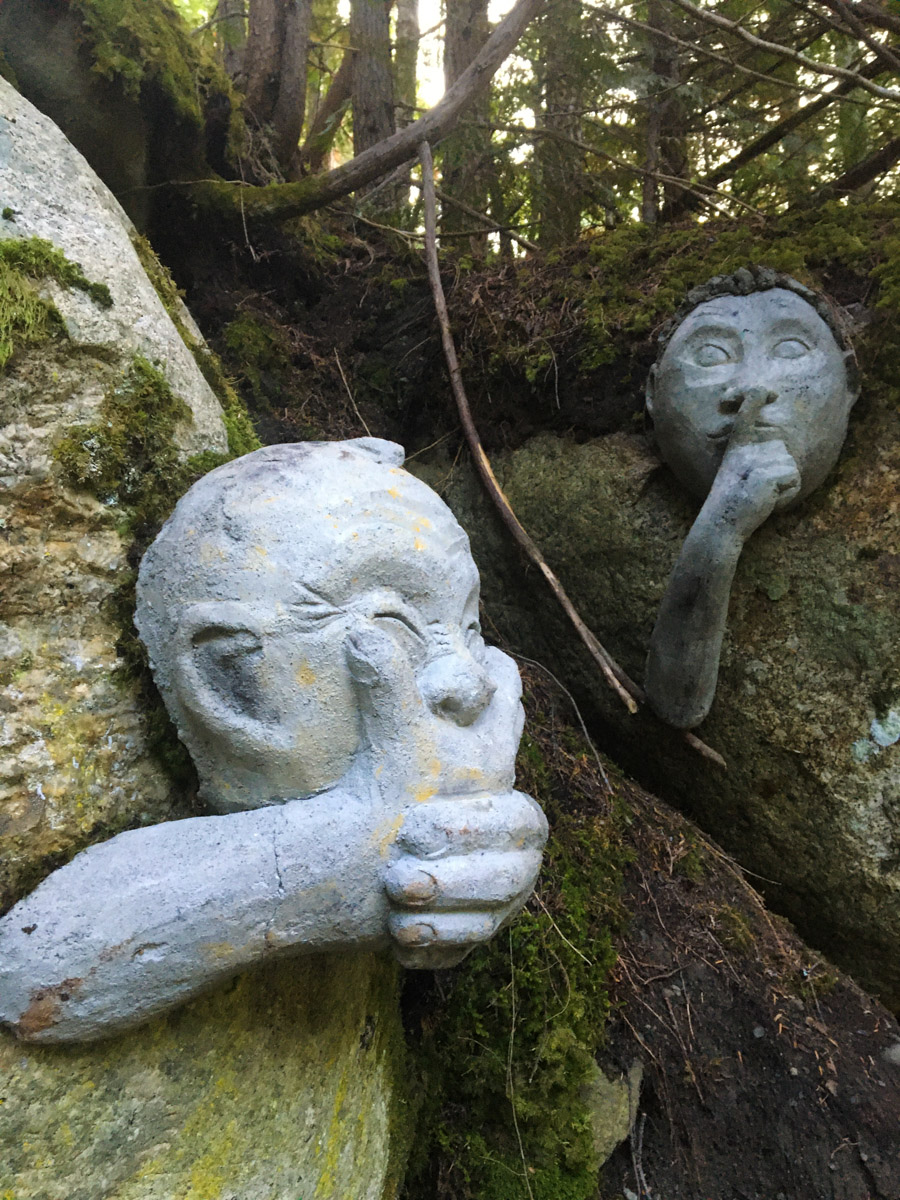 “Sometimes we’ll come up with a crazy or strange idea. And then the three of us, we’re just firing ideas back and forth,” Shine explains. What emerges from this brainstorming, Boyd adds, is often quite different from their initial concept.

“Because we’re such old friends,” Petersen says, “you don’t have to be polite or anything. We have a space that we work in where we can make mistakes, make a mess, slosh water around, and then literally walk away,” coming back later and refining the work.

While Shine and Petersen focus on the mechanics of the large-scale pieces, Boyd gravitates to detailed work. “Christopher and I stand back and let Yvonne deal with detail, like a smile or a wink to the eye,” Shine explains. Together, the trio has crafted several award-winning Sculpturewalk pieces.

They’ve also created a series of burning works for the annual Argenta Fall Faire⁠—a phoenix, a three-headed dragon, or other artworks that they build in a single day and then set on fire. “It’s this big buildup and then oof, up it goes,” says Shine. “Often, the way that it falls as it’s burning is magical.” 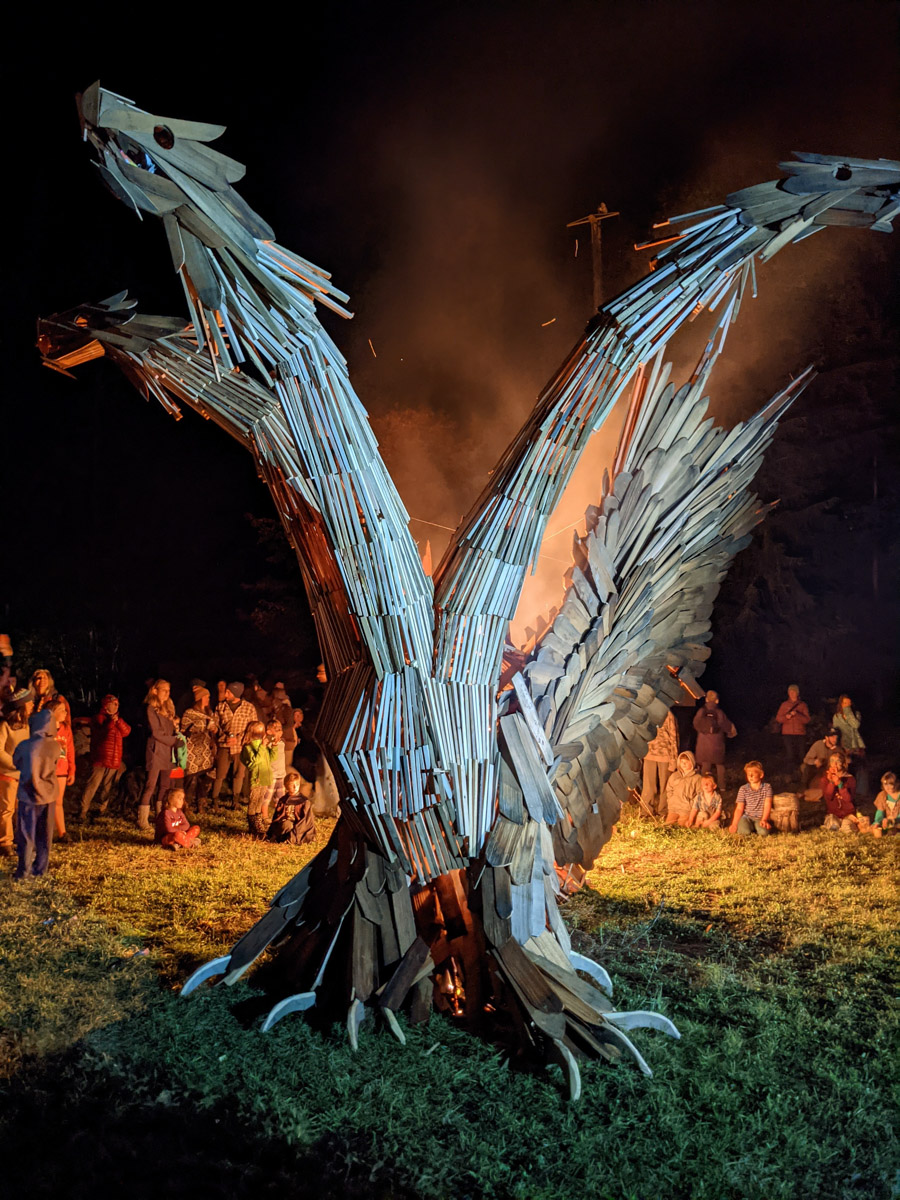 For Boyd, the transient nature of these dramatic flaming works recalls body painting, in which you also create something impermanent. “You get to experience it, then you move on to the next moment,” she says. “It’s a reflection of life.”

But whether in a permanent installation or a fleeting, flaming work, the members of the Koots Arts Collective welcome the opportunity to create public art and see how viewers react.

“People are critical of it, or they dig it or whatever,” Petersen says. “Maybe little kids love it. Or people say, ‘Jeez, that creeps me out.’”

Read more stories of the Arts.