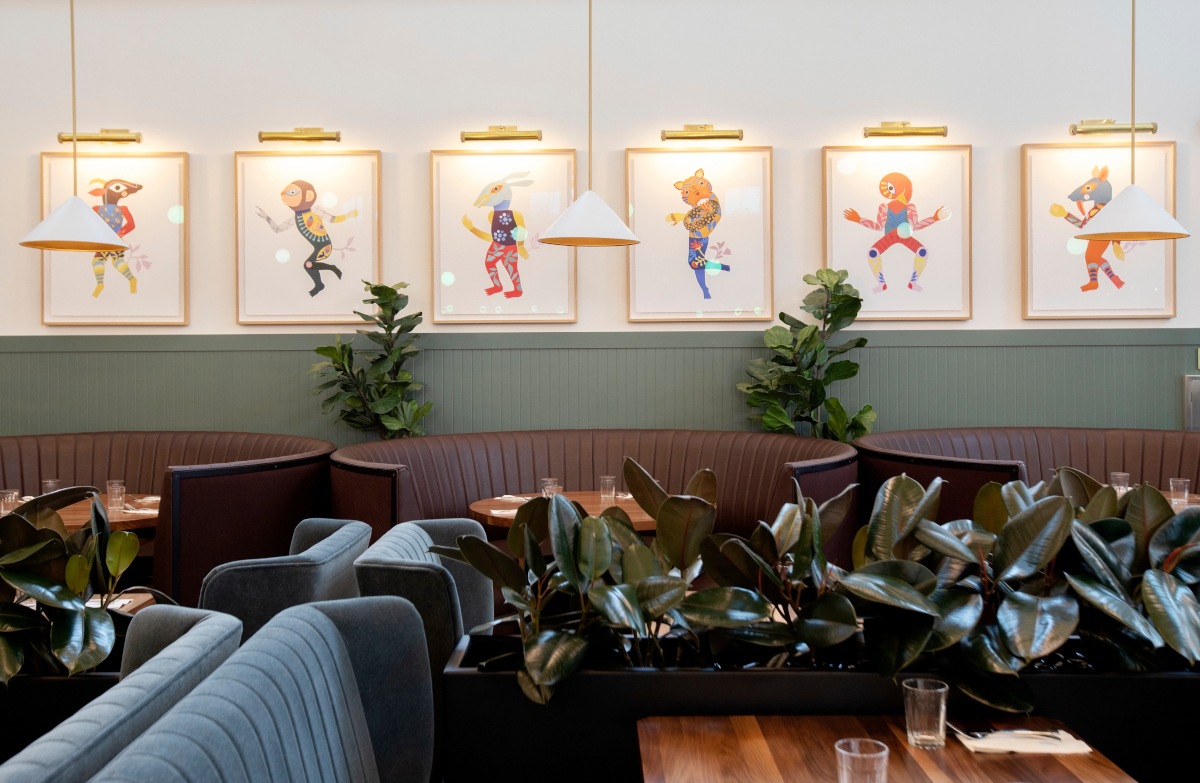 Art by Sandeep Johal at Earls Grandview Corners reflects the diverse spirit of the community.

A series of six prints, each depicting a whimsical animal such as a tiger or a monkey, made from a collage of paper with floral, polka dot, and striped patterns, decorates an otherwise blank wall. The trickster animals pose playfully, as if waiting to jump from their frames and socialize with one another.

Despite the elegance, the six animal prints, with their joyful exuberance, keep the space approachable and fun. They are the work of Sandeep Johal, a Vancouver artist who intersects the feminine with an Indo-folk aesthetic through media such as textiles and collage. Elly Chronakis, creative director of design at Earls Restaurants, was captivated by Sandeep’s animals when she was hunting for artwork for the Grandview Corners location. “On her Instagram, I saw her making these tiny beautiful collages out of patterned paper. They were tiny, but I fell in love with them. And animals are a really big part of Earls’ history and our brand,” she says. Chronakis reached out to Johal, and together they decided to produce high-resolution prints of Animal Parade for the restaurant. 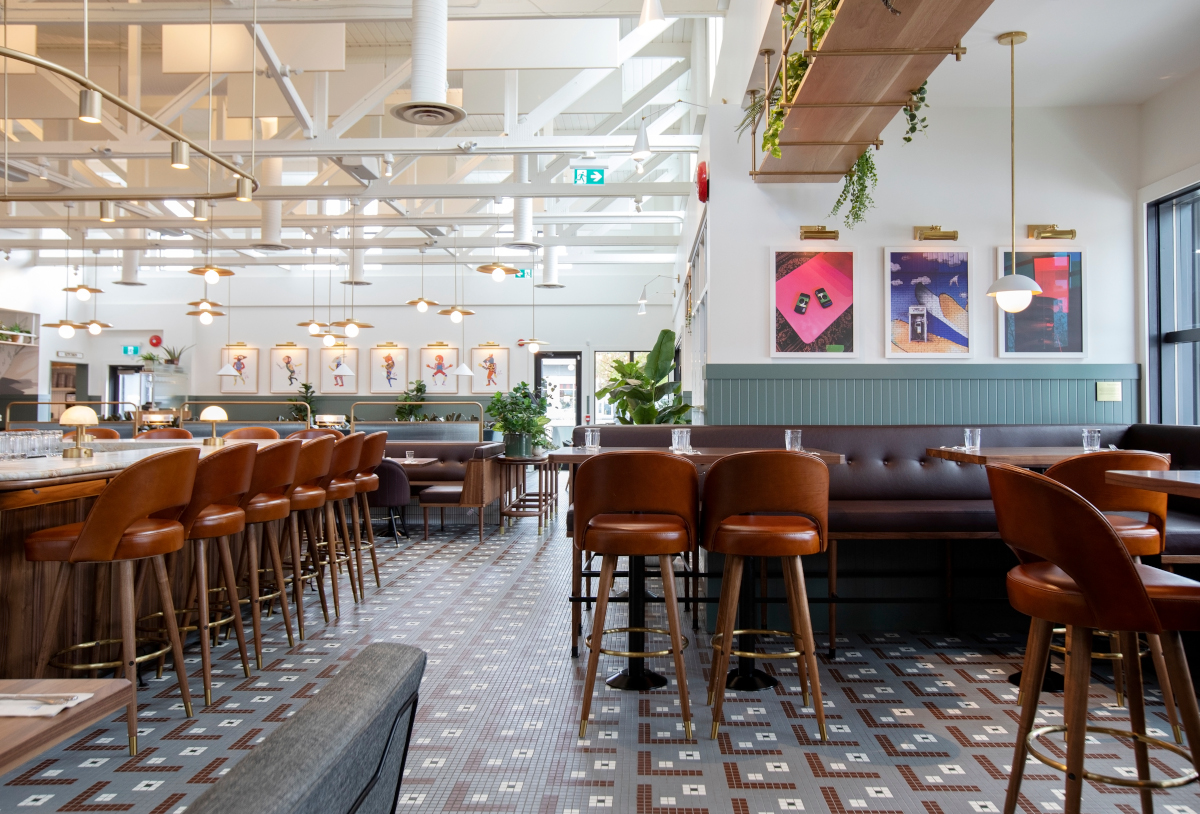 Since 2012, Earls has been curating local artwork for its restaurants. It has collected almost 600 works of art, representing a few hundred artists across almost 70 locations. While Earls has spotlighted art since its inception, it has also initiated a program to create stronger relationships between its restaurants and their local communities. “It always felt like there was something missing, that human connection,” Chronakis says.

The process begins by getting to know what art would reflect a neighbourhood. For the Grandview Corners location, which launched in 2020, Chronakis and project lead Kimberley Hume wanted art that represented South Surrey’s diverse population. “We started with a hyperlocal search, so almost all the artists live in the Fraser Valley, South Surrey community, or they’re really involved in the community,” she says.

For example, a circular serigraph Sgaan Sgaanwee (Supernatural Killer Whale) by Robert Davidson, who lives and works in White Rock and Haida Gwaii, reinterprets traditional Haida artistic forms, such as ovoids and U shapes, to depict the creature’s face.

Serendipity guides Chronakis as she visits nearby art galleries, connects with local curators for recommendations, and combs the internet and social media for unique art pieces, especially by under-the-radar artists.

Chronakis stumbled on Vancouver’s DontDoze Art Collective on Instagram, finding resonance with its mandate to create spaces for underrepresented and marginalized creatives. She found herself immersed in its feed of photographs, which use colour manipulation to reimagine buildings and everyday objects such as stoplights in city environments.

Eventually, she settled on three photographs—one of disposable cameras, another of a payphone mounted on a brightly muralled brick wall, and the last of two vintage cars—for a seating nook across from the bar. The colours in the photographs are saturated, highlighting the out-of-place visibility of these retro objects. “My instinct in the bar area is to go edgier with the artwork. It might be a little more street art,” Chronakis says. Two joined photographs by Delta-based artist Brian Howell of a hotel pool turned skateboard park give patrons seated at the bar a conversation starter.

Besides considering the vibe, Chronakis wants the art to complement the colours and textures of the restaurant. Earls commissioned South Surrey artist Jennifer Clark to paint an abstract mural on the back wall of the dining area. “We imagined this really organic mural in there that flowed up the walls and the ceiling,” Chronakis says. The finished mural’s natural elements, such as drifting leaves and a luminous moon, harmonize with the potted plants around it. 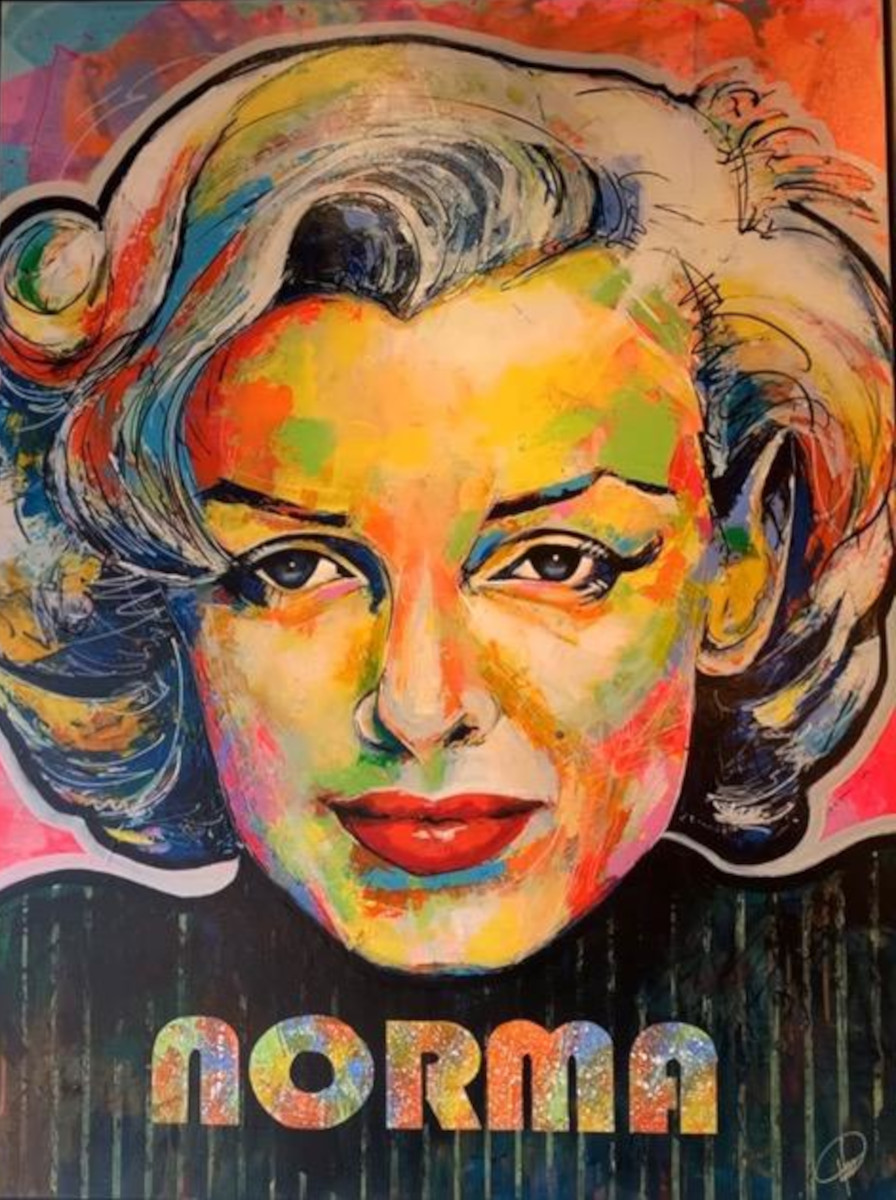 Art by Andy Cao at MeeT on Main.

MeeT on Main runs a smaller art program, also creating synergies between local works, the restaurant, and patrons from the neighbourhood. I visit the restaurant to see the art and talk to general manager Ashley Rioux, who curates a different local artist every two months. As she talks, I admire large acrylic portraits of iconic cultural figures such as Terry Fox, Mike Tyson, and Bruce Lee. They come from Andy Cao, an industrial designer and engineer who pursues his passion for painting in his free time. His works, bold with a riot of colour and rough brush strokes, seem at home among the restaurant’s eclectic furnishings.

“I think about what is going to fit well in the room. Obviously, our aesthetic is very colourful,” Rioux says. “We have a small room but we have a large wall that’s able to become a big part of the room.” Statement pieces with stories to tell grab her attention. Rioux gestures to a painting of Frida Kahlo, raving about how the lively painting captures the energy of the unconventional Mexican artist.

Rioux frequently relies on social media to find artists who use vegan materials in line with the restaurant’s plant-based ethos. She has featured works that use everything from resin to birchwood and moss for creative expression.

“We love to see local artists being promoted in our restaurant, especially since we’re such a local restaurant. Us promoting these artists, especially over these past couple of years, these hard times, has really helped them out,” she says. Previous artists include Jasmine Pearl Schut, who creates surrealist paintings that interweave the mythical with the natural, and Beatris Bogomilova of Bisa Lisa Studio, who crafts delicate pyrography or woodburning pieces. 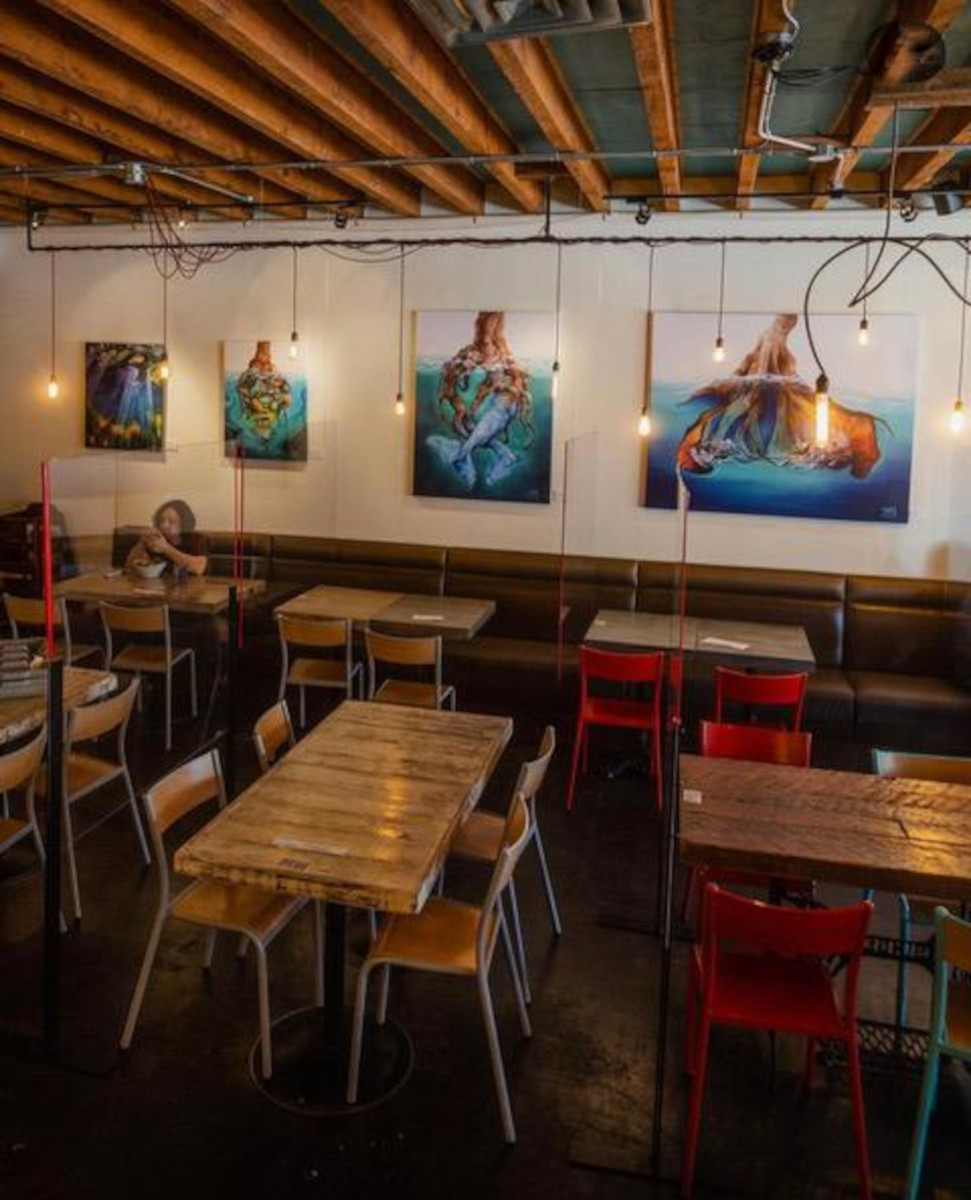 Once she settles on an artist, Rioux invites them to the restaurant for a bite and a drink before they discuss works to display. “I like them to come in at our busiest time so they can understand how the vibe is in the room, to see how their paintings would fit in,” she says. Some artists select works from their portfolio, while others create pieces especially for MeeT.

All the works displayed at MeeT on Main are for sale, in addition to raising the profile of the artist. The restaurant treats the artwork like a limited exhibition that keeps things interesting for regulars. “We get a lot of hype, especially when we have a new artist come in. Everybody always has something good to say and notices when there is a change,” Rioux says.

She acknowledges curation is a lot of work but feels it’s worth it. Both she and Chronakis recognize how art transforms a restaurant from a place for eating to one that cares about and invests in the culture of its community.