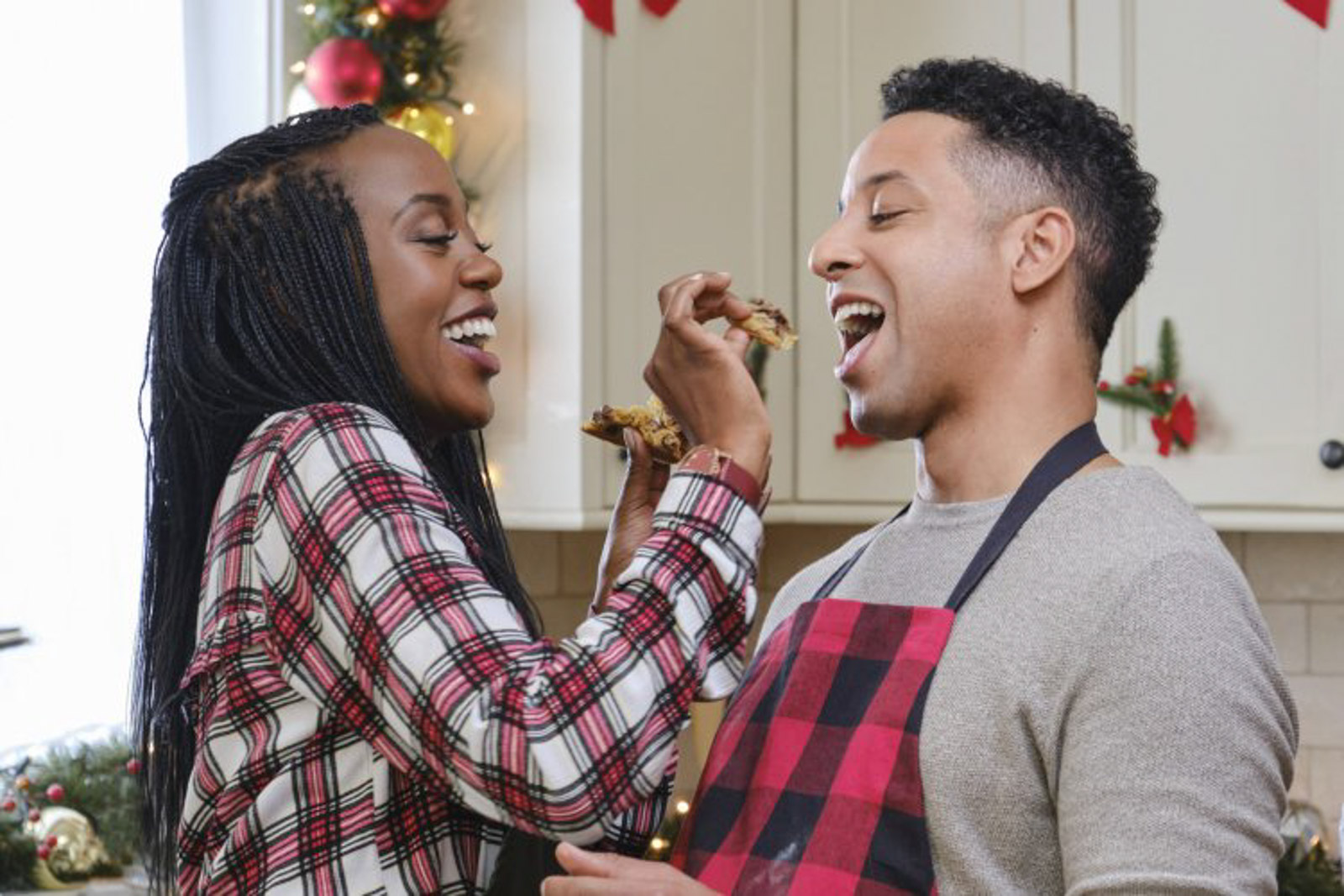 No one makes Christmas movies the way we do in Hollywood North, in large part because we’re a go-to location for companies such as Hallmark and Lifetime that specialize in family-oriented holiday film fare. In a regular year, Vancouver and surrounding areas serve as the backdrop for more than 60 Hallmark films and series—which means our local casts and crews have become experts in making Christmas movies.

So we asked three veterans of locally shot Christmas movies to share their holiday memories and traditions this year, and to pull back the curtain on how these festive films come together.

When Nicole Oliver was a little girl, her mother had a unique way of letting the kids know they were allowed to come down for Christmas morning.

“My mum would play a recording of Neil Diamond singing ‘White Christmas’ superloud on repeat to get us all out of bed,” Oliver says.

It’s one of the many traditions the award-winning actress, voice actor, and voice director has carried into adulthood. 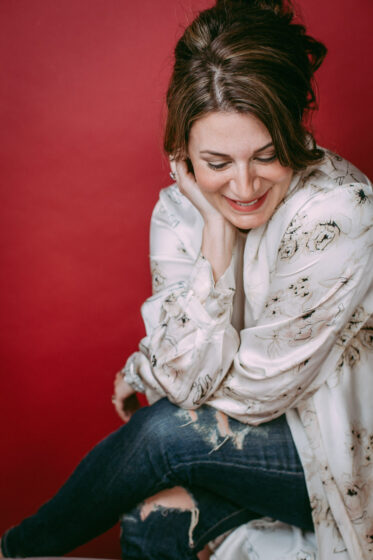 Like her mother, Oliver hosts a Christmas Eve party for family and friends (at least, she does in non-pandemic years). She decorates early in the season, often the third week of November. And Christmas Day is all about family: opening stockings, making breakfast together, playing games, and, yes, singing Neil Diamond songs.

There are some Christmas traditions that Oliver can’t recreate from her Ottawa childhood: skating on the Rideau Canal, stopping for hot chocolate and beaver tails; the scent of her mom’s perfumed coat in the car after Christmas Eve mass; building snow furniture in the yard.

But Oliver has new traditions, like Elfie, her Elf on the Shelf, who made his annual appearance on December 1 and spent 14 days in a quarantine jar. “Now he’s wearing a little sweater that says ‘I survived the 2020 quarantine.’” She laughs. “He is my absolute favourite.”

Oliver filmed her first Christmas movie 23 years ago. She knows—and is willing to share—a few of their secrets. “The trees aren’t decorated all the way around,” she says. “There’s no hot cocoa in those cups. Most of us wear really comfortable shoes until we’re on camera, and then we’re wearing the most impractical footwear you’d never wear in winter, but it looks good. We don’t eat in eating scenes.”

It means a lot to Oliver that these Christmas movies are popular all over the world. And this year, “it means even more, because my family is able to tune in to watch me in a movie,” she says. “So while I can’t be with them in person, I can be there on the screen doing things that maybe we’ve done together. That’s been a lovely gift to be able to be with people I love when I can’t be near them. At least I can be close from afar and maybe share a bit of Christmas joy.”

Favourite Christmas movies: “Love Actually, followed shortly by Die Hard, and yes, it’s a Christmas movie—don’t even get me started. With Love Actually, every time I watch it, I feel like I’m watching it for the first time. I get so angry at Alan Rickman’s character (may he rest in peace) for making Emma Thompson cry. But then I watch Die Hard and what happens to his character in that, and then I feel okay.”

Christmas in Evergreen: Bells Are Ringing

Antonio Cayonne’s favourite memories of Christmas Day involve playing in the snow with hundreds of kids.

“You’d head outside in your snow pants and mitts and toque, and suddenly you’d be in a massive snowball fight,” says the Vancouver-based actor, who grew up in a co-op just north of Toronto. “These were epic days. Everyone was there. Those were the most exciting parts of Christmas.” 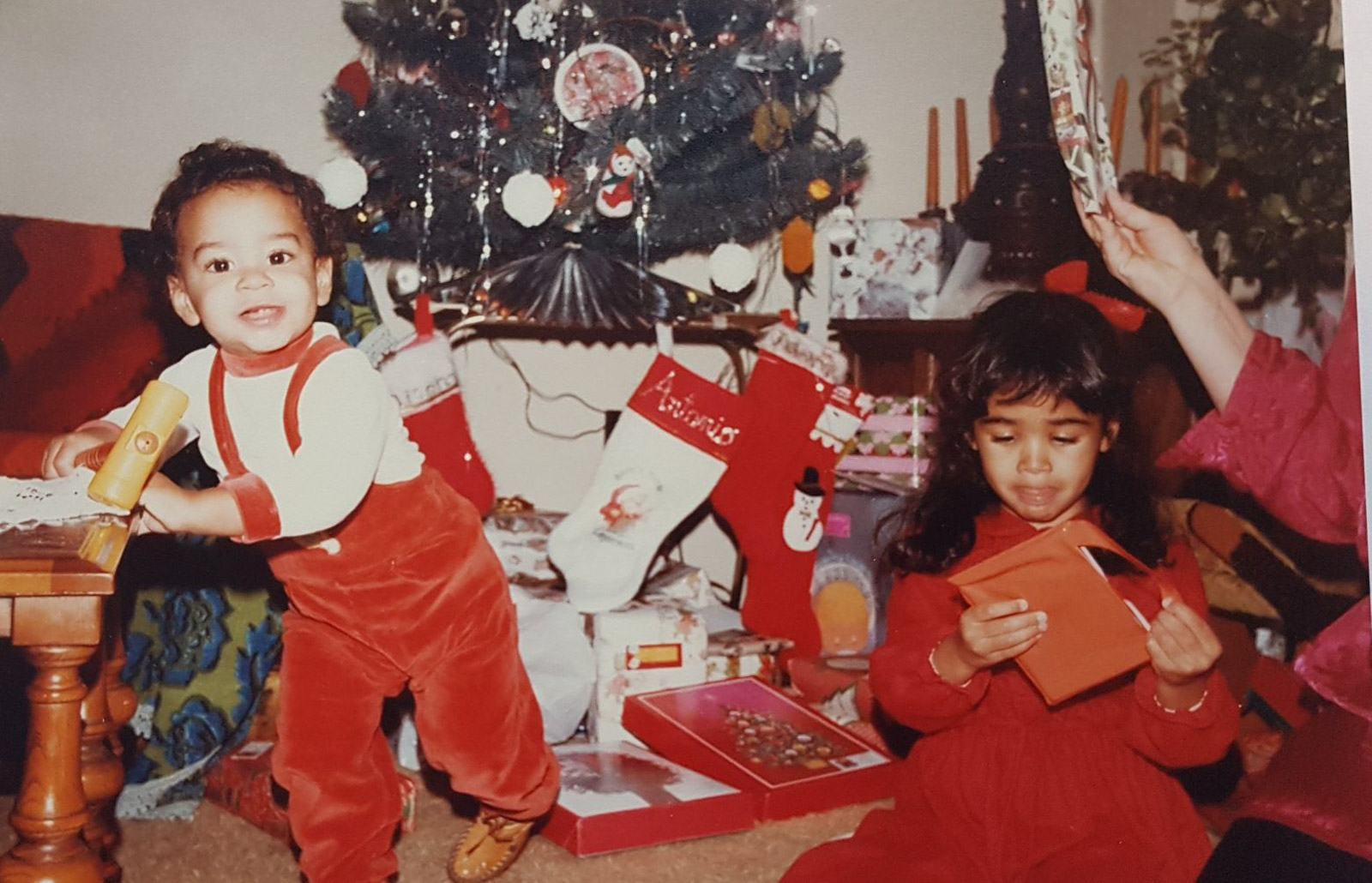 “That neighbourhood—from home to home, house to house, kid to kid—was diverse,” Cayonne adds. “Every house had a different tradition, even within the same faith, because people had come there from all over the world.”

In Cayonne’s house, the sounds and smells of Christmas were heavily influenced by the Caribbean. Cayonne’s dad was from Trinidad, and his Dutch mother would prepare salt fish and fried bake for breakfast, and pelau and chicken for dinner. His dad’s specialty was fried banana fritters.

“He never wrote down the recipe for those fritters, and he passed a few years ago, and no one has been able to crack the recipe,” Cayonne says. “I’ve tried. I’ve almost burnt the kitchen down trying.” 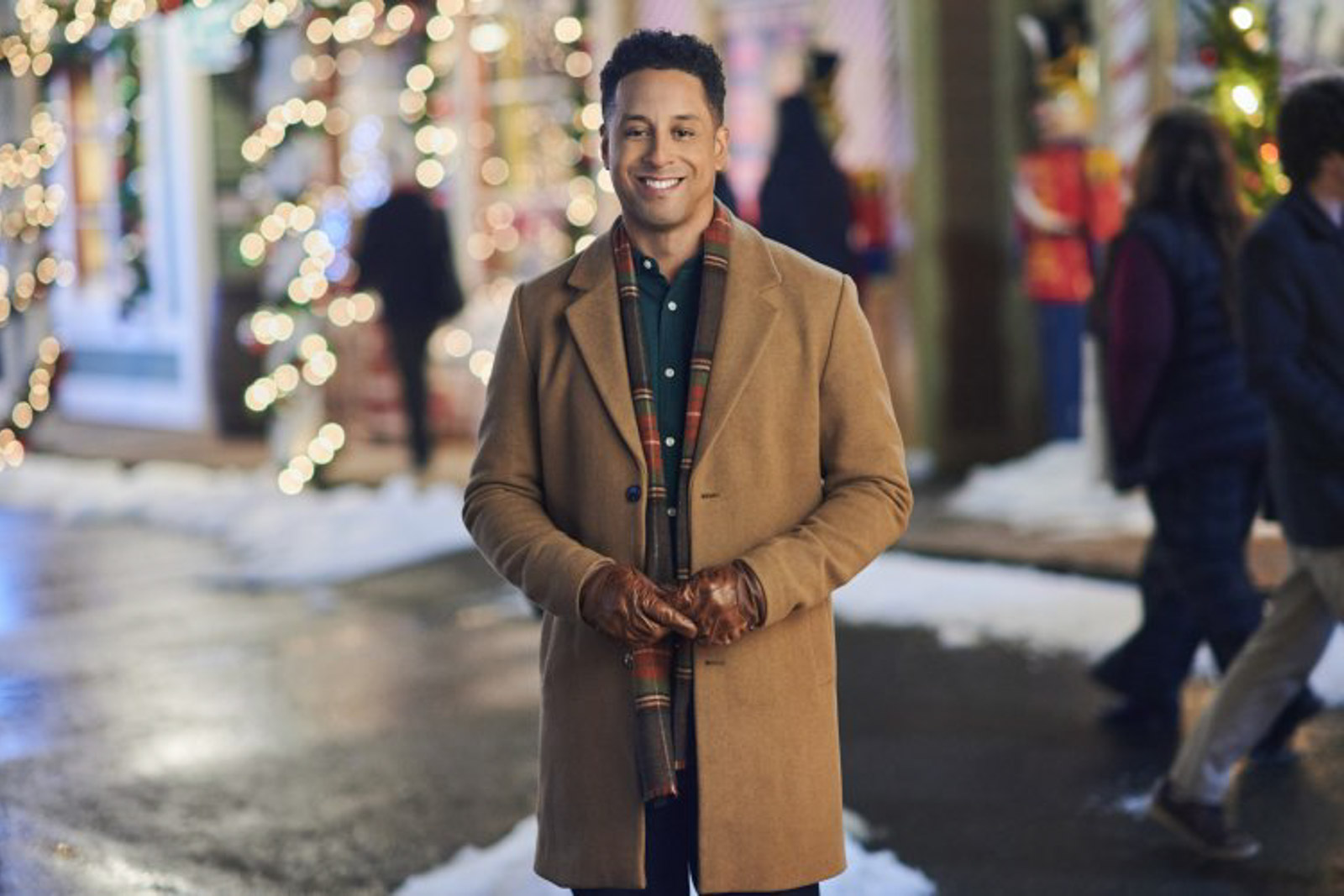 Cayonne is a dad now (he wrote a book about his journey into fatherhood, entitled Currently Dadding), and he’s eager to create traditions with his young son that reflect the reason for the season.

“This year is the first year that I’ve started planting in his head who Santa is, what giving is, and who Santa can’t get to,” Cayonne says. “I’d really like to start a tradition where we become Santa while Santa comes to find us. We’ll make a list of what a little boy or girl might love at Christmas, and we’ll buy it and donate it.”

Earlier this month, Cayonne was seen acting opposite Rukiya Bernard in Christmas in Evergreen: Bells Are Ringing. “This is my first Hallmark lead, and my first lead outside of theatre,” Cayonne says. “I’ve done a lot of Hallmark as ‘the best friend,’ or as Saturday Night Live would put it, ‘the best friend with no back story.’ Rukiya and I are aligned in what this has been for us.”

“I didn’t know that I was this wholesome,” he adds, “but it turns out that I have a soft spot for these movies and I loved being in this film, and I want even more for us. This is the place where you want things to change.”

Favourite Christmas song: “Mary’s Boy Child” by Boney M. “This is what Christmas sounds like and feels like to me. It’s festive and joyful and bumping.”

Favourite Christmas movie: Babes in Toyland. “It used to terrify me, but it was also a fantastical world I wanted to be a part of.”

Santa’s Boots; Once Upon a Holiday

Jacqueline Samuda moved around a lot as a kid. Her dad was a professor, and his work took the family to university towns all over North America. But Samuda’s most powerful Christmas memories are from the four years they lived just outside Princeton, New Jersey.

“We basically lived in a Christmas card,” the Vancouver actress and writer recalls. “We were in the countryside, with five miles of woods behind us and glacial rock formations. Deer would come prancing through the yard.” 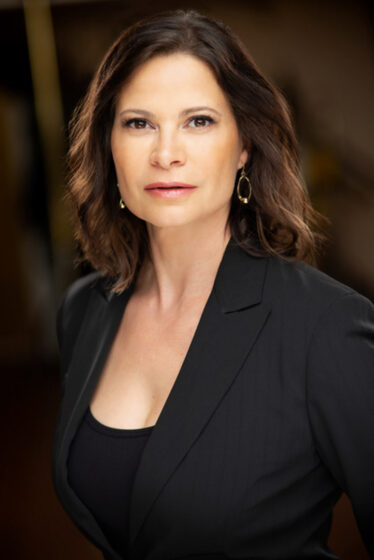 Samuda’s stepmother hailed from France, and around the holidays, she’d prepare traditional French foods and desserts. “She’d make croquembouche with homemade profiteroles and threads of candied sugar, and bûche de noël with chestnut cream and chocolate frosting and mushrooms made out of meringues so it would look like a fallen log in the forest,” Samuda says.

Samuda’s love for Christmas hasn’t waned since she was a kid. In a normal year, she puts up her tree on December 1. “This year, I put it up two weeks early,” she says. “I needed it.”

“Sadly, I don’t have the same lightness and wonder this year,” she adds. “Usually I’d get up every morning and sit with my coffee in front of the tree, and I have to admit, I haven’t been doing that. I don’t want to push too hard.” 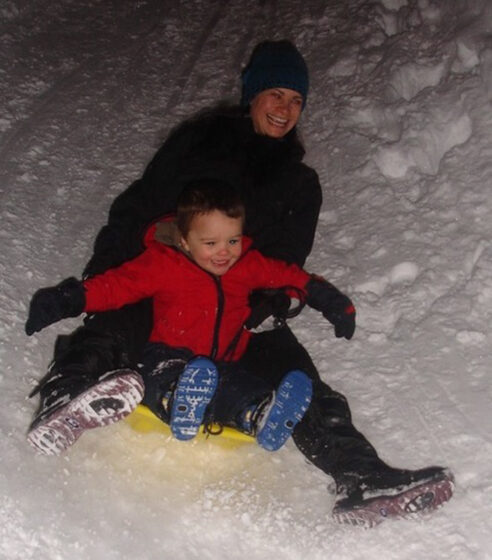 Part of the challenge stems from the fact that Samuda—like all British Columbians—won’t be celebrating Christmas beyond her immediate family this year. She won’t be hosting 30 members of her family on Christmas Eve or her husband’s father on Christmas Day.

“It’s just one year,” Samuda notes. “We’ll all be together again next year—I believe.”

Samuda on snow in Christmas movies: “We’ve been making these films in Vancouver for so many years now that you could be standing next to a pile of snow on a boiling hot day and be convinced that you’re in a winter wonderland. Sometimes they’re actually blowing the ice machine and creating real snow. Other times, they’re laying out these white blankets and fuzzy white cotton and dressing that. They even know how to make it look like it snowed two days ago, with the fake snow melting slightly around a lamppost. That’s the magic of movies.”

Favourite gifts she received as a child: “I loved receiving notepads and pencils and pens and sharpeners and erasers.”

Favourite Christmas movie: “My all-time favourite is Billy Wilder’s The Apartment with Shirley MacLaine and Jack Lemmon. And It’s A Wonderful Life still makes me cry after all these years.”