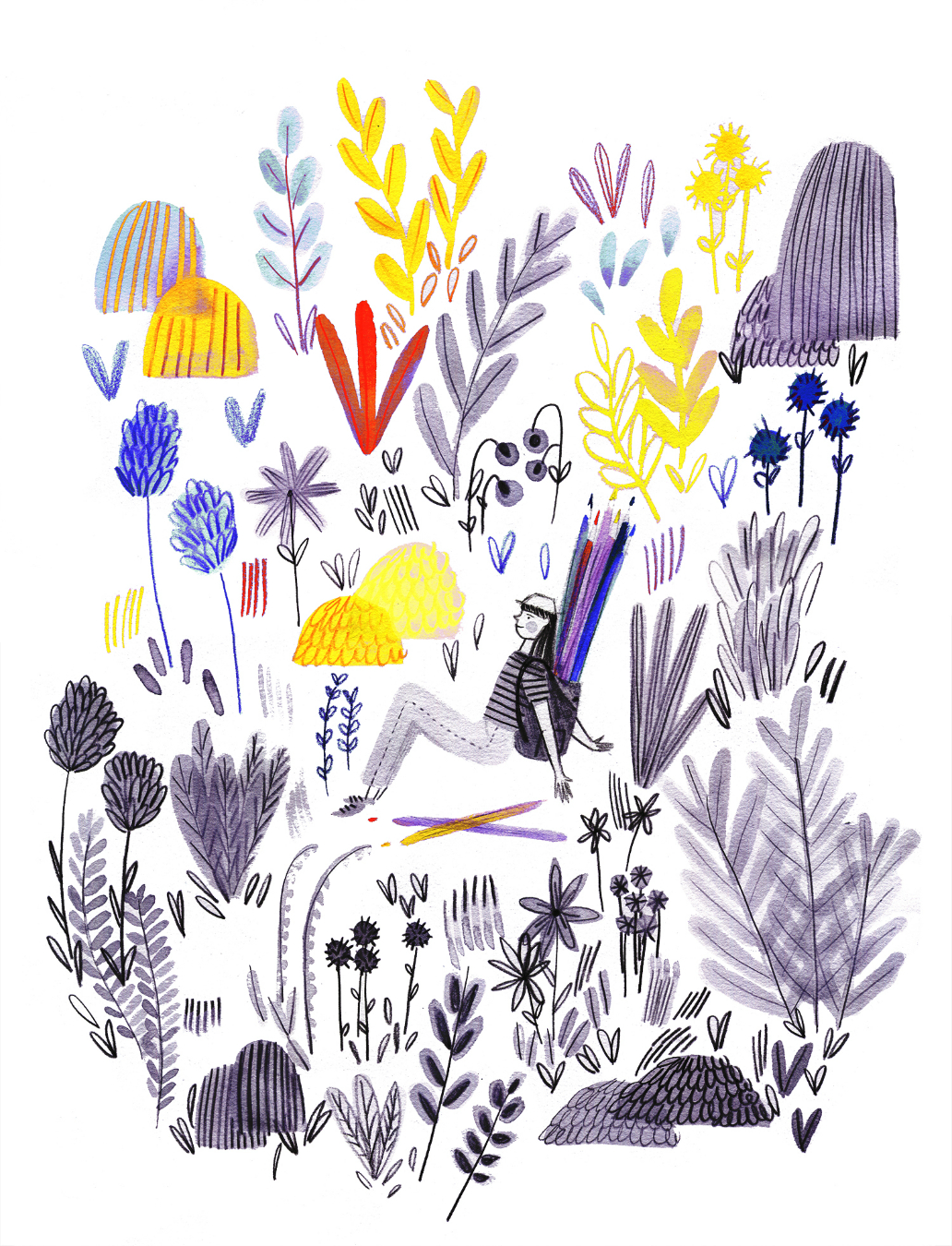 Childhood was a time with more crayons than cares, and for many kids, there was no activity more calming than drawing inside the lines of a colouring book. There were no boundaries, and certainly no rules: a red tree, a green sky—wherever our imaginations took us. Unbeknownst to our younger selves, the activity was eliciting a relaxing mindset similar to meditation: uninhibited freedom of thought. For this reason, it comes as no surprise to many therapists that colouring books are undergoing something of resurgence, albeit designed for a much older audience.

Adult colouring books went from niche hobby to global trend quite suddenly in 2013 when Scottish illustrator Johanna Basford, who specializes in hand-drawn patterns, was asked by a British publishing house to create a children’s coloring book, and offered to draw one for adults instead. Secret Garden: An Inky Treasure Hunt and Coloring Book went on to become an international bestseller, moving about two million copies worldwide in its first year.

A registered art therapist at the Vancouver Psychology Centre, Lesley Bruun remembers ordering that exact book online and waiting months for it to arrive because it wasn’t available anywhere else. Nowadays, the shelves of local stores including Collage Collage and the Vancouver Art Gallery gift shop are bursting with adult colouring books, and in 2015, they made up five of the top 10 bestsellers on Amazon.ca.

When Bruun first became an art therapist 12 years ago, she started giving her clients—young and old—detailed colouring pages as a way to become more mindful. “There is something about colouring and drawing that increases attention, especially for people whose mind tends to wander,” she says. “It’s a safe step to reintroduce yourself to your creative side.” On a psychological note, the books generally offer calming nature or ocean scenes, and intricate kaleidoscopes or mandalas: symmetrical and repetitive patterns meant to promote relaxation and enhance creativity. Physically, the simple act of holding a pencil or paintbrush and moving it across a page has often helped Bruun’s clients feel more at ease, especially when discussing deeper and more personal issues.

Where the trend is seeing a pushback is among therapists concerned with use of the word “therapy” on some book covers. If the expectation is that the simple act of colouring at home will provoke some kind of profound personal change, it can be misleading, says Bruun. It’s therapeutic, yes, but not therapy. “When I’ve given [colouring] as homework, it’s for a certain reason and there is intention behind it,” she says. “For the wrong person, it can actually heighten feelings of anxiety, or for someone who is a perfectionist, it can make them feel stressed about whether their drawing is good enough.” Other critics say colouring books are a mindless form of escapism for adults to avoid confronting the world around them. To that, Bruun argues that it’s no different than other hobbies, such as knitting or scrolling through Pinterest.

Overall, the consensus among professionals seems to be: what’s the harm? “For a lot of adults, [colouring] is the safest way for them to move back to rediscovering that sense of playfulness within themselves,” says Bruun. “There are also higher cognitive functions going on, even within a pastime, in terms of selecting what colours you’re going to use, balancing out patterns, and making things symmetrical.” She also encourages practicing calm, steady breathing while colouring, and intentionally replacing negative thoughts with more positive ones while focusing on filling in the page. “For most people, there is a sense of accomplishment when they create something beautiful,” she says. “The adult colouring phenomenon may stay or go, but if art therapy in itself is something that more people are aware of, that’s a benefit.”

In a world of constant stimulus, for some, there is comfort in letting the mind wander into a realm of tranquility and creativity. For others, the need to stay within the lines is anything but soothing, and the colouring book is destined to become another well-intentioned purchase gathering dust on the shelf. Either way, there are few things more nostalgic than kicking back with some pencil crayons and reconnecting with a time when the hardest decision was which colour to use.

Try a bit of everything—read more from our Culture section.