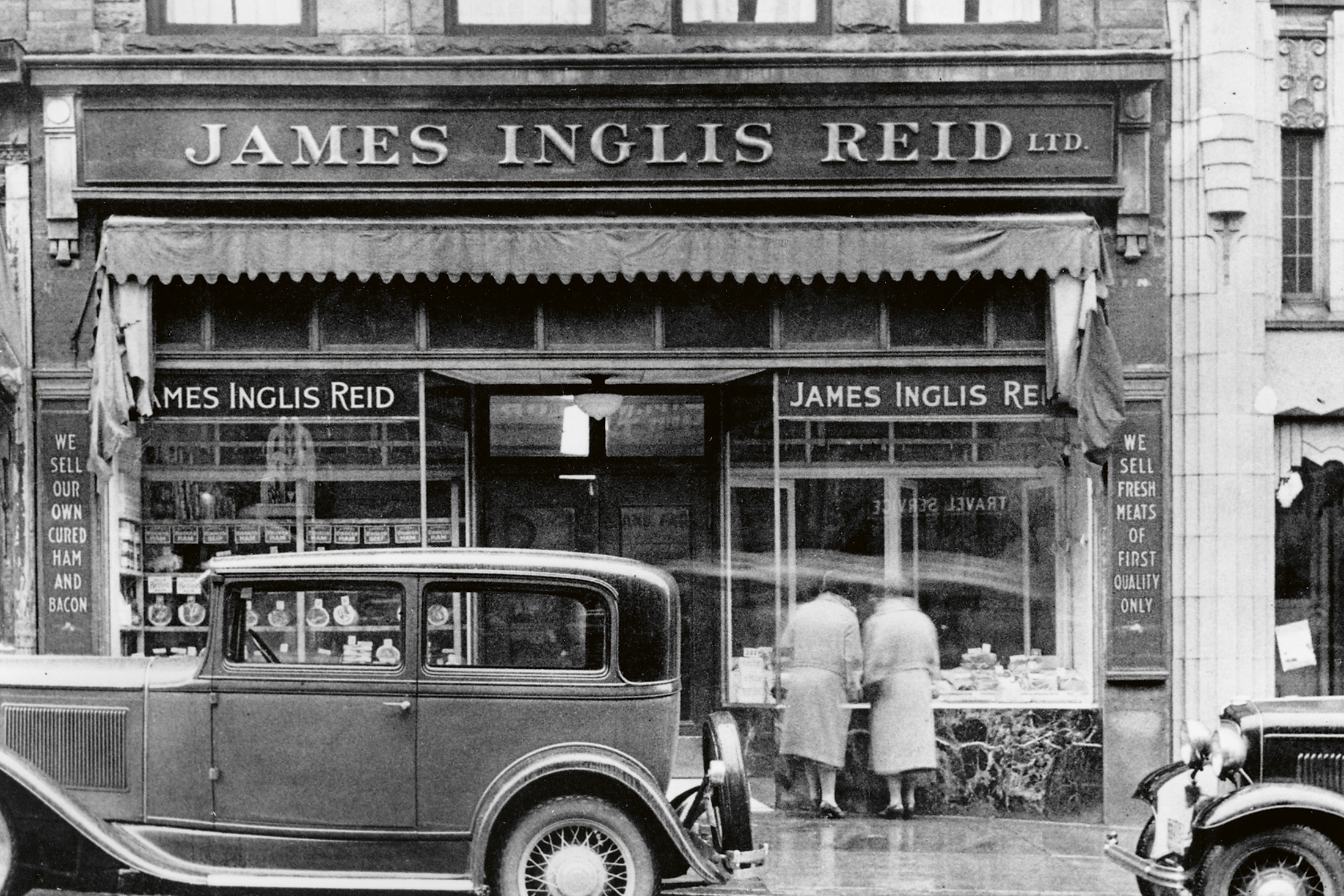 When James Reid moved from Scotland to Vancouver and founded his butcher shop in 1908, he might not have imagined it would serve generations of loyal customers and become a fixture on Granville Street for nearly 80 years. Known for its cured and smoked hams and bacons, expertly prepared sausages and haggis, freshly baked meat pies and scones, the shop’s butchers and bakers relied on family recipes and techniques passed down for decades.

Now, 30 years after its last ham was sold, Anne Wyness retraces her grandfather’s steps in her new book The Larder of the Wise from Figure 1 Publishing, and remembers the contributions James Inglis Reid made to our city. Here is the book’s foreword by Michael Kluckner, reprinted with permission. 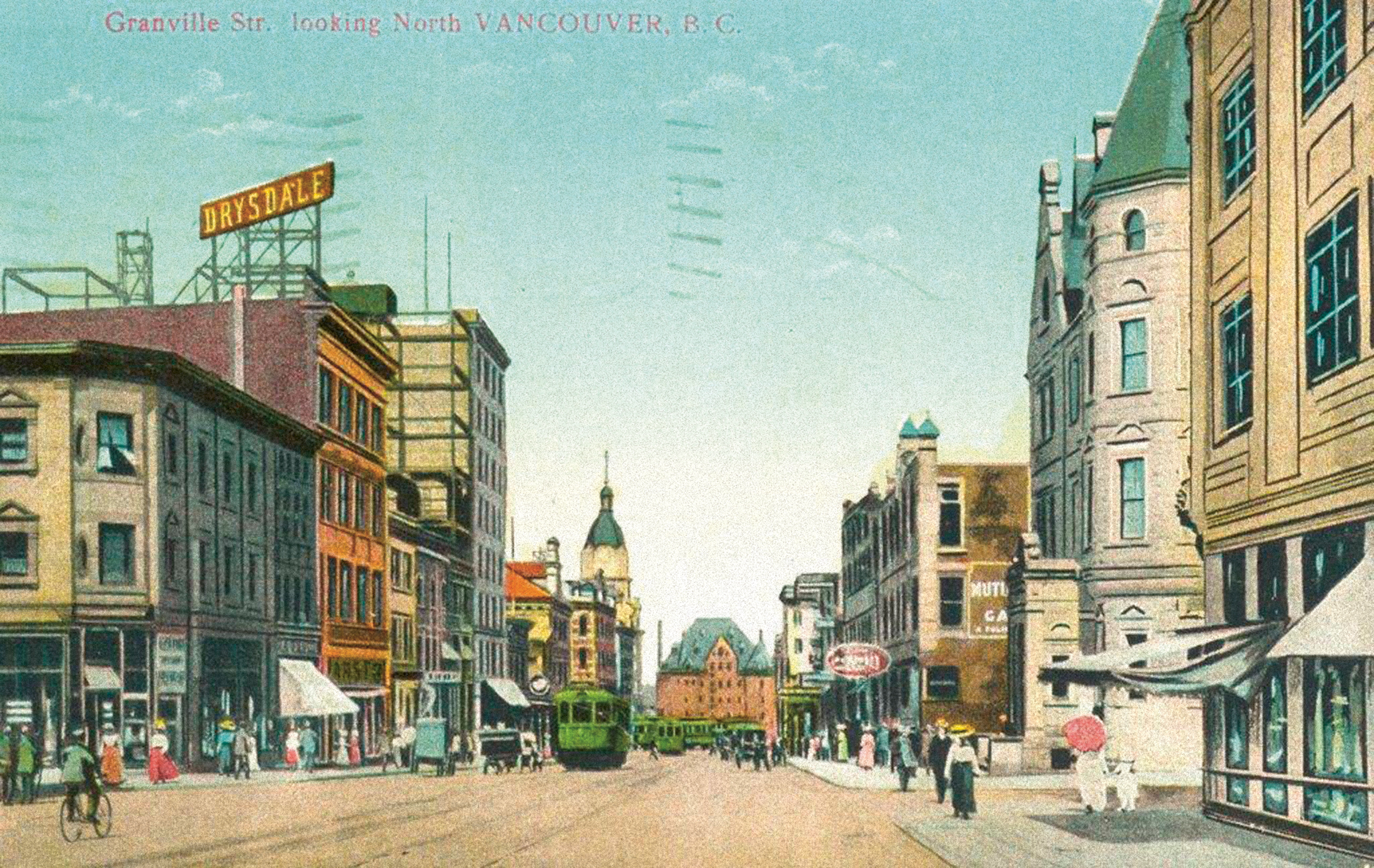 A postcard of Granville Street. Image courtesy of John Mackie.

Times change and people move on. Businesses come and go. Much of the Vancouver of the postwar era has disappeared.

Anyone who has lived anywhere for any time at all is subject to waves of nostalgia for favourite places, oft times captured in phrases that begin with “Remember when we. . .?” But how do you filter this cascade of memories to find the handful of events and places that are significant not just personally but for the broader community?

A short list of significant vanished local businesses would include Woodward’s, Duthie Books, and perhaps A&B Sound. As a destination, many people remember the Granville Street butcher shop called James Inglis Reid with its famous Scottish slogan, “We hae meat that ye can eat.” 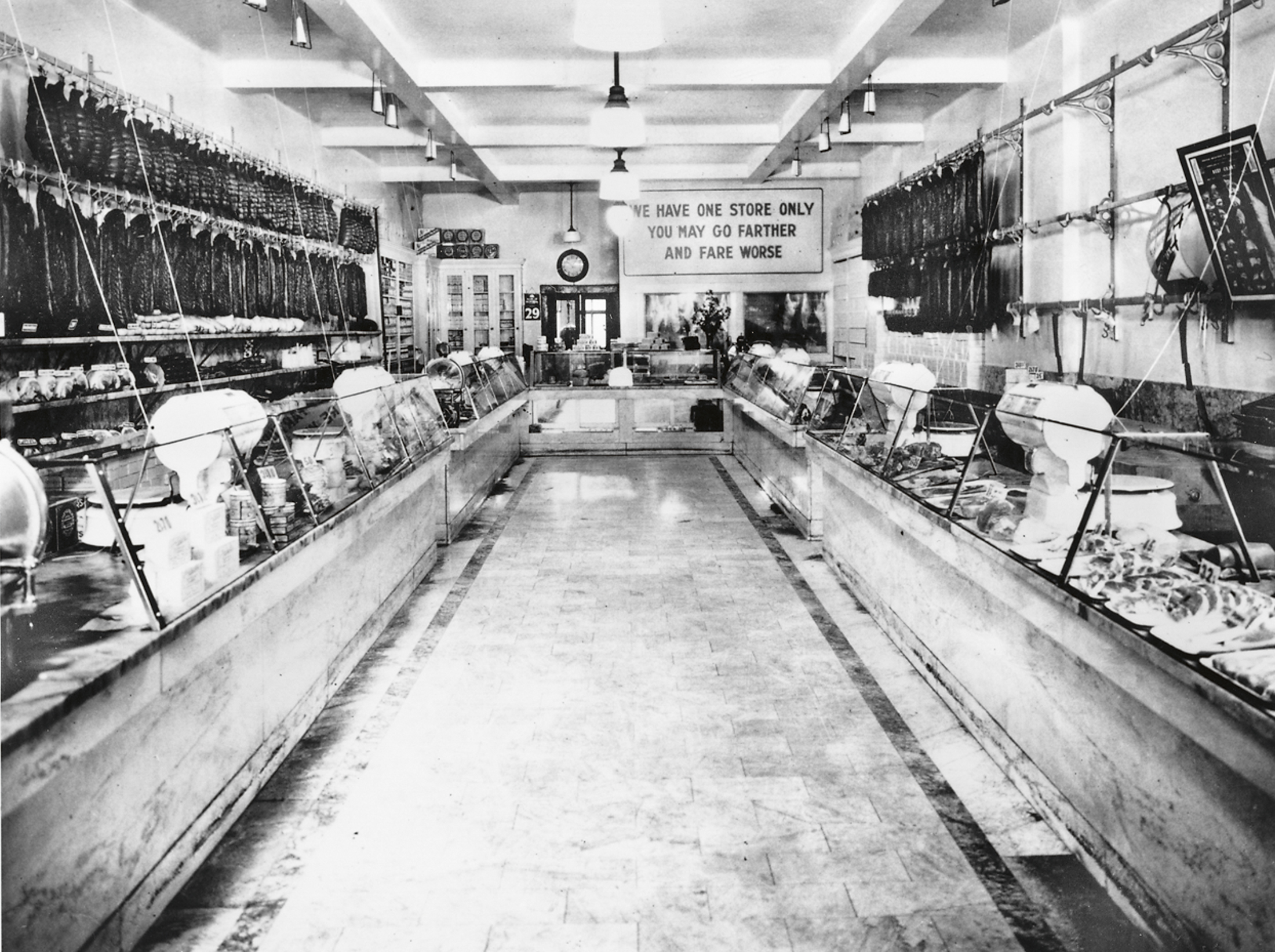 I grew up on Kerrisdale’s Wiltshire Street in the 1950s, across the street from the store’s manager, Gordon Wyness, and his wife Alison (a daughter of James Reid). My brother and I played backyard baseball and road hockey with their boys, walked to school with them, trick-or-treated on Halloween and watched TV in their basement on rainy winter weekends.

Mr. Wyness, as he always was to us, stood out from the other neighbourhood dads, partly because of the tall, craggy figure he cut when he walked out in the morning to catch the Granville Street bus, but also because he was home on Wednesdays, due to the Wednesday closing bylaw, and often could be spotted doing chores like lawn-cutting. Then too, he wasn’t around raking leaves on Saturday mornings like the other dads.

Gradually I came to know the store. Its second-floor office window was a perfect viewpoint for watching PNE parades. It had curious smells in its various nooks and crannies, sawdust on the floor and cured hams hanging from hooks in the retail area. Haggis-fanciers descended on the store each January for Robbie Burns Day. Black puddings (and white ones too) delighted the local Scottish community and mystified the rest of us. 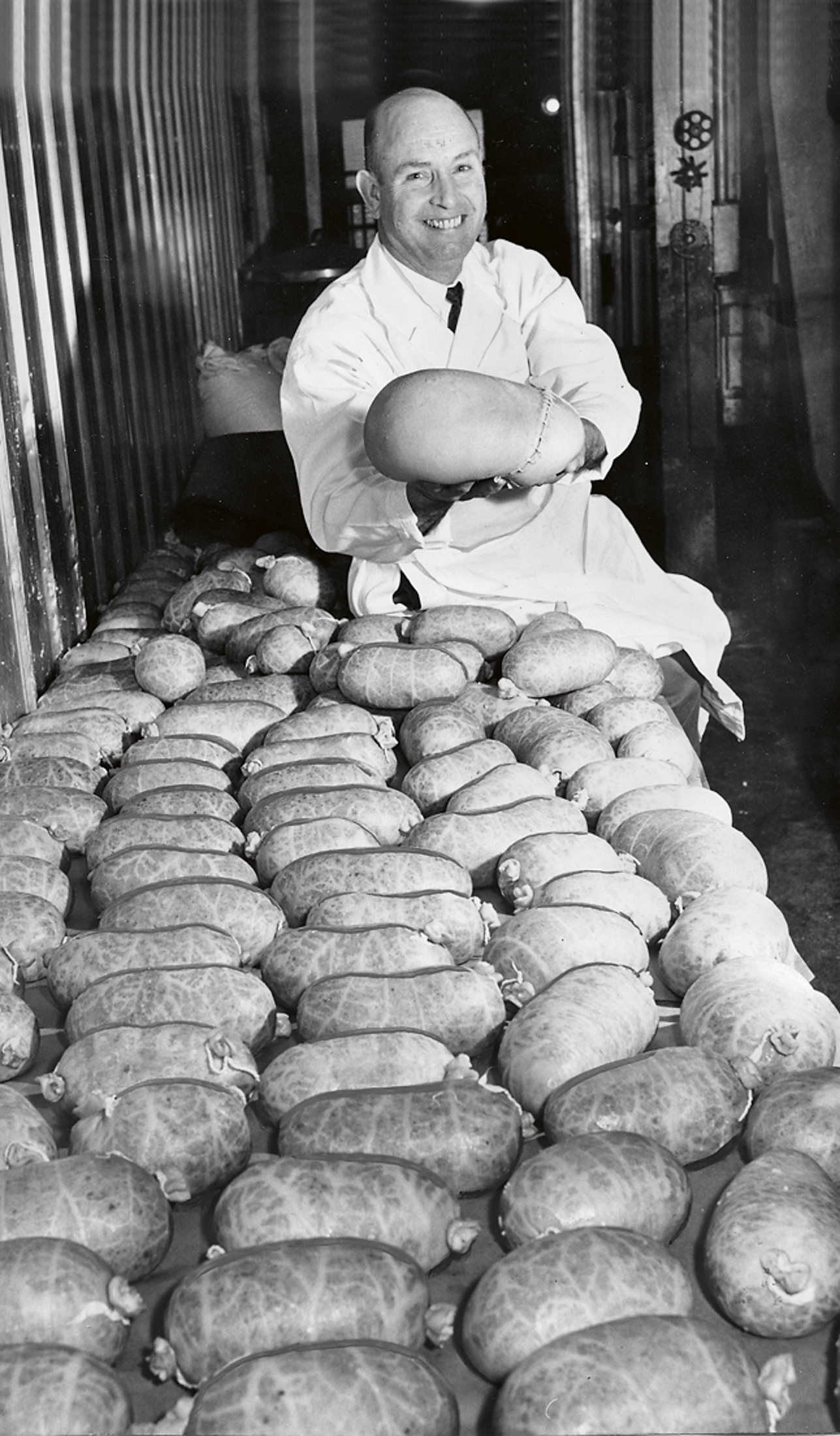 Haggis. Image from the Province/courtesy of Figure 1 Publishing.

In one Vancouver legend, housewives phoned their meat orders in to Reid’s, which were then picked up by their office-worker husbands who, with string-wrapped brown-paper packages in hand, boarded the streetcar for home just after five PM on weekdays. In another story, Shaughnessy matrons who added Reid’s sausages for their servants to their regular order began eating them themselves when they realized how good they were.

The store’s significance, beyond the intense nostalgia it evokes in certain carnivores, is that it was family-owned, yes, but also that it was a comprehensive butchery and bakery right in the centre of Canada’s third-largest city. Things were not just sold there, they were made there. Raw ingredients, rather than ready-to-sell food prepared in a factory in the suburbs, were delivered to the back door. 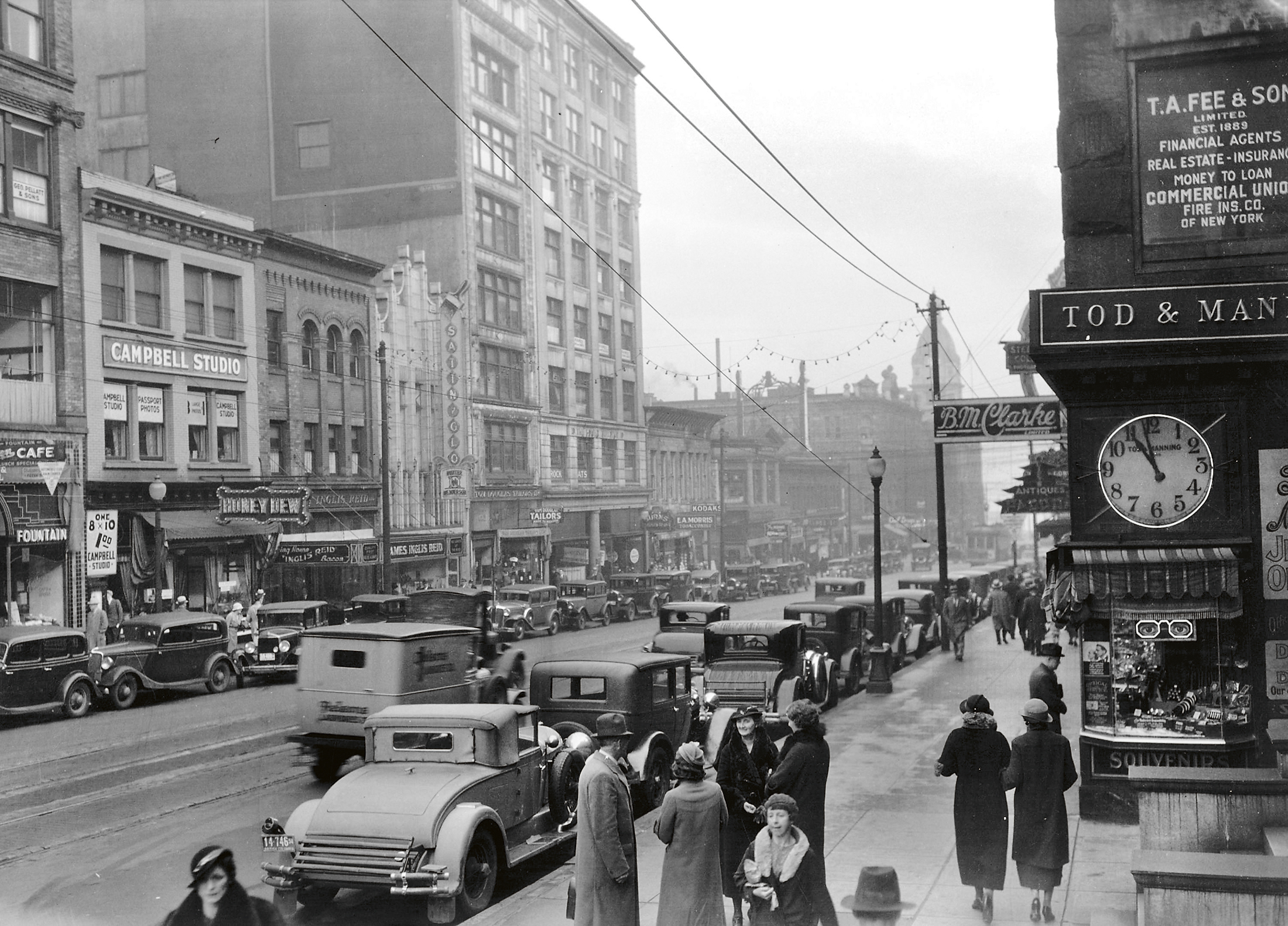 Granville Street, with the butcher shop in the background. Image courtesy of Stuart Thomson.

When it closed in 1986 to make way for the northward expansion of Pacific Centre mall, an era had ended. It was said that people didn’t shop that way, or downtown, anymore, and regardless, there was less interest in the specifics of food—supermarket meat was good enough and convenient to get. But how times have changed since. People live downtown in numbers far exceeding those of the compact city of a century ago, and a foodie culture has placed quality and uniqueness at the top of the food chain.

New, high-end butchers have opened in the Vancouver area in the three decades since Reid’s closed. None have Reid’s atmosphere and could probably never achieve it, due to the suite of health and food-handling regulations that were never thought necessary a few generations ago. But all could learn from the remarkable saga of the store, its techniques and recipes, and the story of its founder. Granddaughter Anne Wyness, who followed in her mother’s footsteps with a notable career in nursing and teaching, is one of the few who can tell it.

We no hae meat anymore, at least not like Reid’s. But now we hae this wonderful book that ye can read. 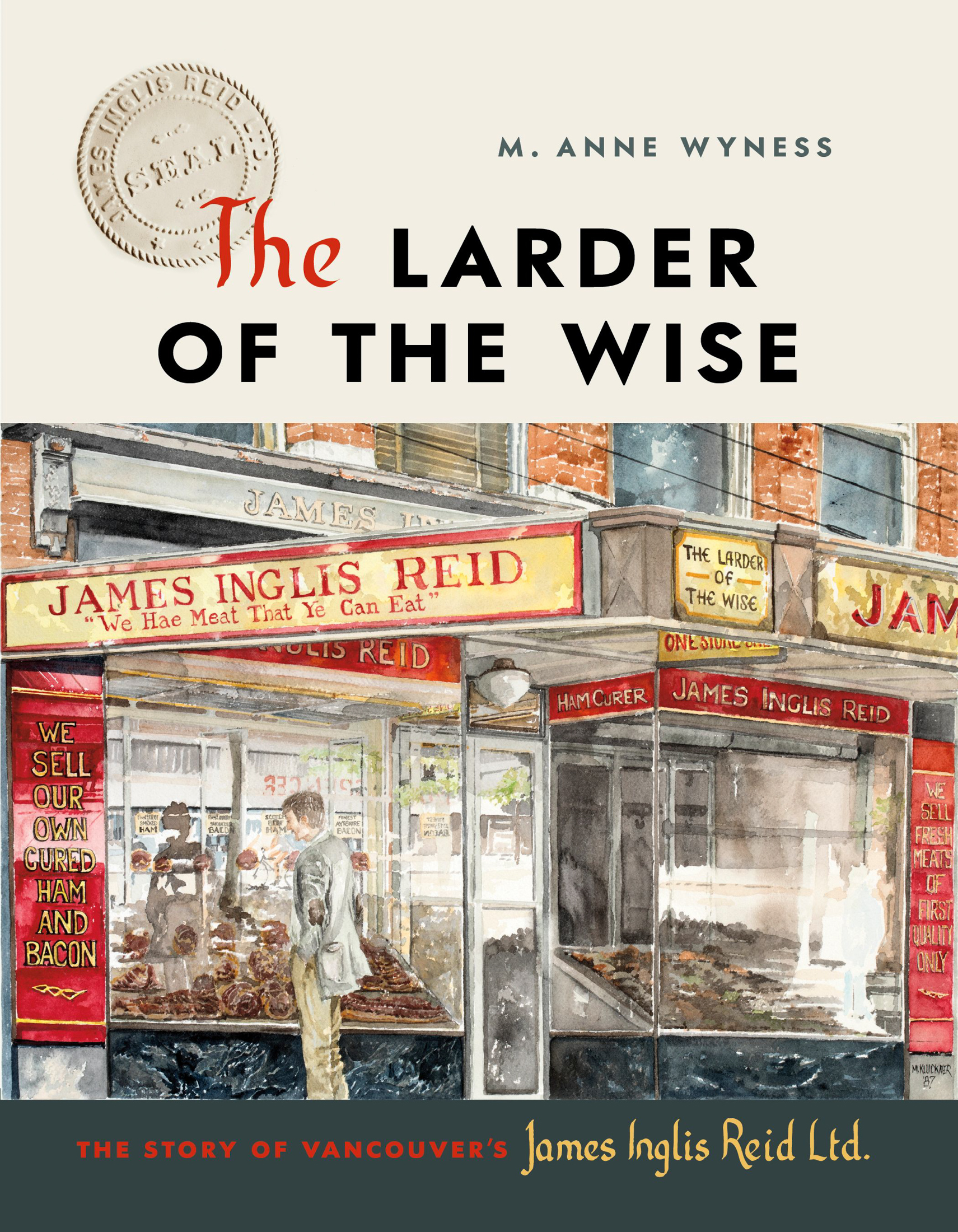 Excerpted from The Larder of the Wise: The Story of Vancouver’s James Inglis Reid Ltd. by M. Anne Wyness. Copyright © 2020 by M. Anne Wyness, Foreword © 2020 by Michael Kluckner. Excerpted with permission from Figure 1 Publishing. All rights reserved. No part of this excerpt may be reproduced or reprinted without permission in writing from the publisher.