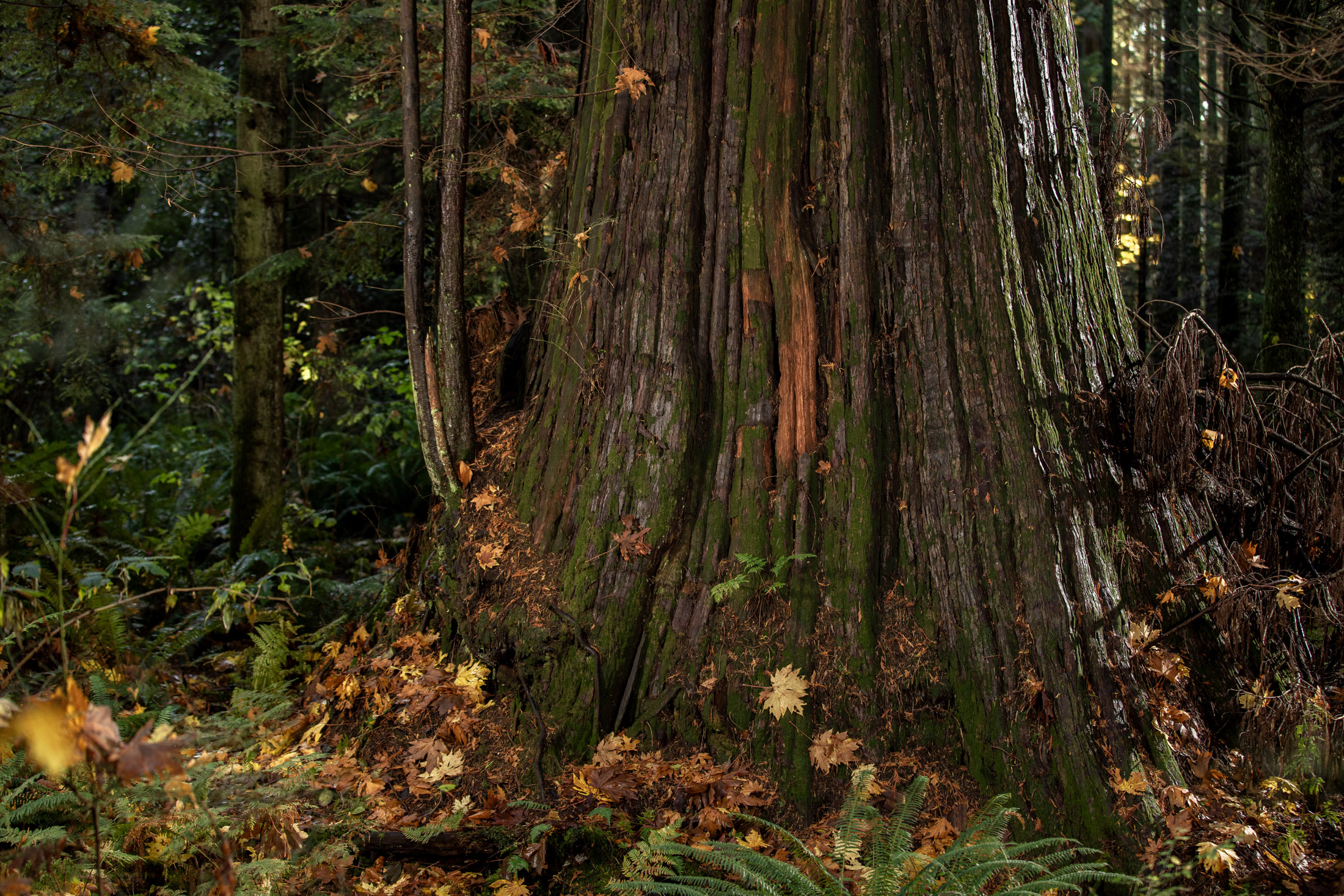 If you were a small child growing up in North America any time after the mid 1960s and your caring parents read stories aloud, there’s a good chance you ran into The Giving Tree. This still popular picture book by Shel Silverstein has sold more than 10 million copies, triggering oceans of tears. It’s all but impossible not to cry as you follow the life arc of an oblivious boy and the selfless apple tree that donates every one of its physical properties over decades—without reservation or expectation—to ensure he has a long and unworried life.

The Giving Tree is widely considered the ultimate tale of altruistic motherly love, apple tree as mother—a mother tree, if you will. While Silverstein’s lopsided love story fascinates many readers, it irritates plenty too, who see it as an allegory for the ways humans ravage the natural world with no thought to consequence. I wondered what Dr. Suzanne Simard, professor of forest ecology at the University of British Columbia, would make of this fable—and what kind of a children’s book she might write about mother trees if her publisher were to ask.

I was thinking about this last spring as I read The Giving Tree to my grandchildren at the very same time as I was finishing up Simard’s captivating memoir Finding the Mother Tree: Discovering the Wisdom of the Forest, which debuted at the end of May at number four on The New York Times nonfiction best sellers list. Simard’s three decades of field research in the forests around British Columbia have led to, among other revelations, the groundbreaking discovery that trees in the wild engage in mutually beneficial conversations with their offspring, their own kind, and other compatible species. I had my own takeaways⁠—a grandmother’s priorities.

Simard’s science has confirmed that tree-to-tree communication is made possible by the mycorrhizal fungi that attach themselves to their roots (various mycorrhizal fungi colonize 90 per cent of all plant species.) These filaments spread out through the soil in a rich web to link up the roots of one tree with the roots of multiple welcoming neighbours.

The fungal wisps that make up these networks, which have been christened the wood wide web, are pipelines that transport nourishment—carbon, water and other nutrients—between trees when one of them requires a boost. They also serve as conduits for trees under siege to send out chemicals warning other potential victims to prepare their defence.

Simard fondly refers to the oldest trees in these networks as mother trees, not because they have a gender—the conifers she studies have both male and female flowers—but because they have the most roots and the farthest-reaching mycorrhizal networks, sharing enriching connections with a multitude of trees in their orbit. Even as they stand dying in the wilderness, the very oldest of old growth—like the massive 1,000-year-old yellow cedars in the vicinity of Fairy Creek on Vancouver Island—transfer their valuable resources to the next generations.

Finding our own mother tree

After finishing Simard’s book, I look at all trees differently, especially our native conifers. I have a newfound curiosity about their ages, eagerly surveying the landscape for old cedars and firs and for the juniors they converse with.

I want my own grandchildren to know that trees talk to one another and that they are physically interconnected underground; I want them to see mycorrhizal fungi where they reside. They could do with a lot less Silverstein and way more Simard, but how was I going to bring her scholarship to life without my imagined storybook?

As it turns out, Simard herself had the answer. In the epilogue to her book, she writes: “Here is a simple and profound action you can take right now: Go find a tree—your tree. Imagine linking into her network, connecting to other trees nearby.” 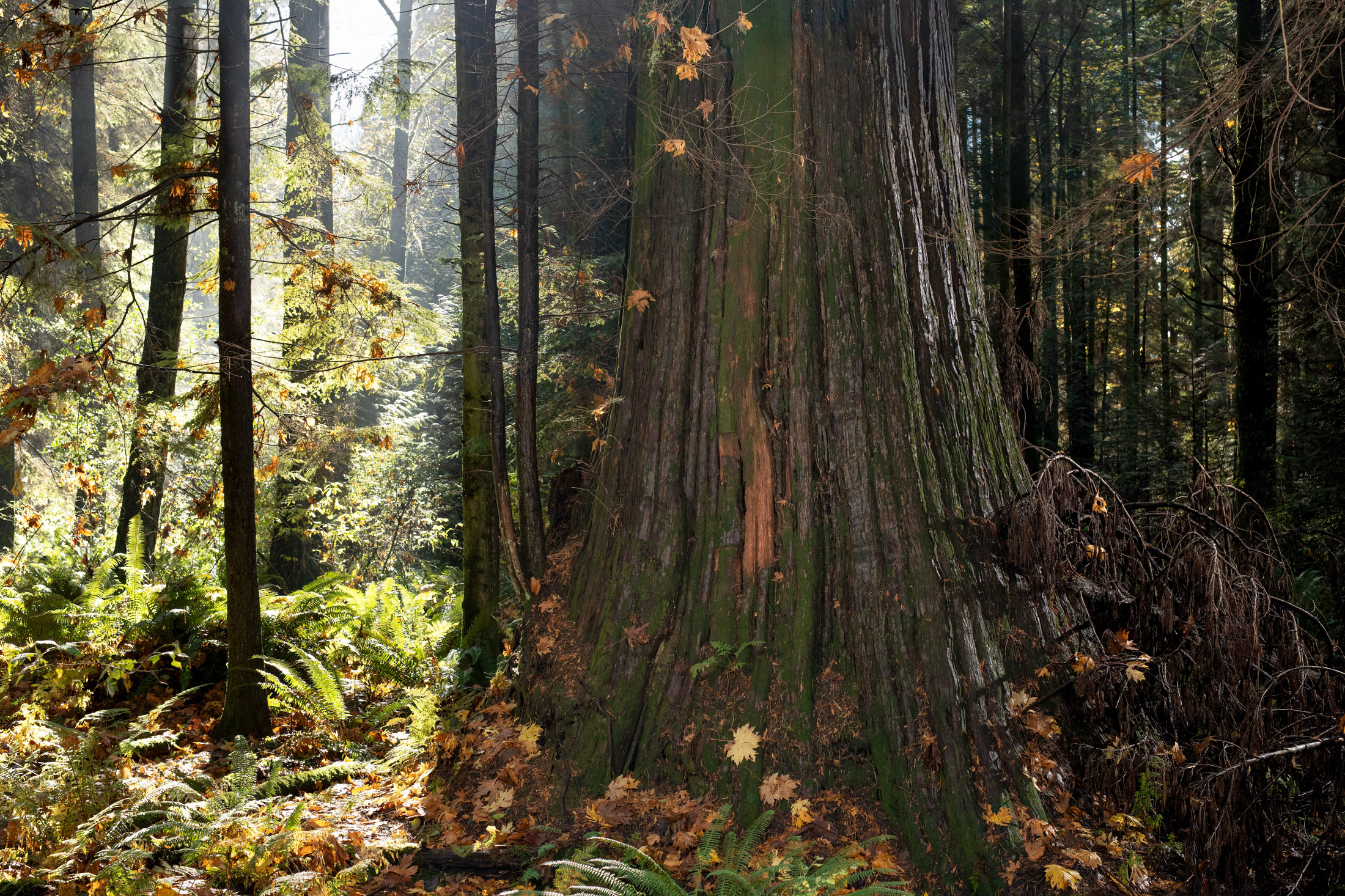 I could do that. And I had the perfect tree in mind to share with my wee kin. I had seen a photo of it in Simard’s book with a caption that read: “Thousand-year-old western red cedar Mother Tree in Stanley Park.” This ancient forest remnant would be, by my estimation, the oldest living thing in Vancouver, a successor to the world famous 1,000-year-old “National Geographic tree” that blew down in the park in 2007.

This tree could be our tree; skookum, to use a word favoured by Simard.

The hunt for red in October

After fruitless forays into the park with my husband and hitting a dead end questioning Stanley Park associates early last summer, I reached out to Dr. Simard and her colleague Dr. Teresa Ryan, who is credited with the photo, to ask where exactly in the park this mother-of-all-Vancouver-mother-trees might be. But with Simard busy promoting her book and both scientists immersed in The Mother Tree Project, Simard’s long-term field experiment in forest cutting and planting methods, I didn’t really expect a response.

Lucky for me then, Matthew Beatty offered to help. Beatty is an arborist with Bartlett Tree Experts, a committee member of the BC Big Tree Registry, and an accredited big tree climber who previously scaled old trees in the park to investigate ecological systems in their canopies. In an email he suggested: “The tree I expect to be the one you are looking for really does exist …. and yes it can be hard to find.” He was heading out of town but promised to help me locate it when he got back.

By mid-July when Beatty returned, the park trails were closed due to the alarming number of coyote attacks on visitors. We proposed picking up our pursuit once the park was safe and open again, but when this occurred in late September, he was no longer available.

Lucky for me once again, I had a backup plan. It involved a roundabout way to prevail upon Simard that resulted in her answering my question with just enough detail that my tree-savvy landscape architect husband spotted the 1,000-year-old specimen without much effort when we set out with friends to search for it on a recent sunny October afternoon. 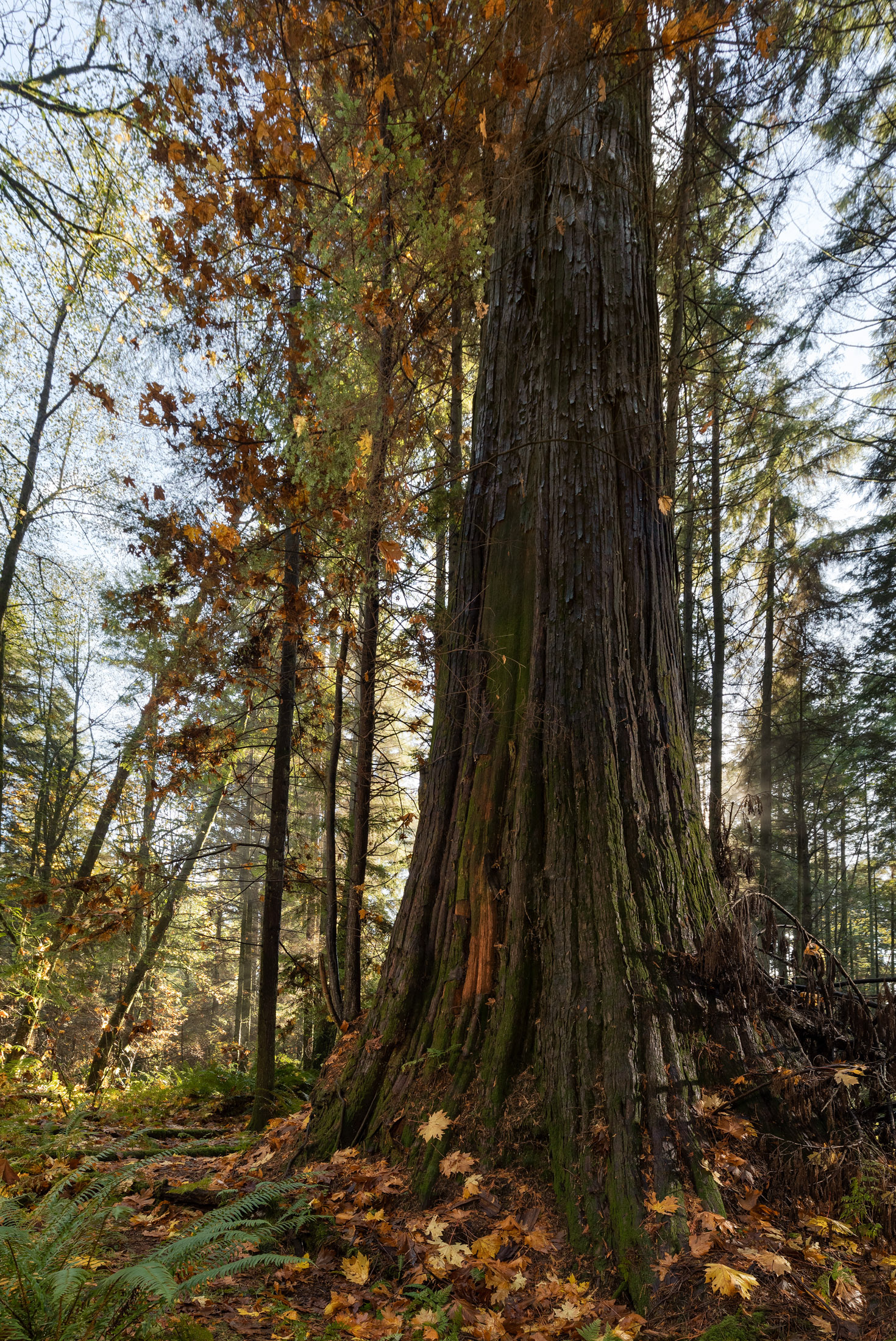 After six-months of looking, the shock of standing in front of what my family now refers to as the Suzanne Simard Mother Tree was mind-blowing and humbling, and I cannot wait to sweep up my sweet bambinos and introduce them to “our mother tree.”

“Did you say our tree is 100 years old Grandma?” seven-year-old Dylan asked when I told her about the discovery, “and will we be able to dig around it like you promised?”

“It’s 10 times 100 years old, D,” I replied, and no, we would not be going anywhere near her roots. “This tree is too precious, love; we’ll be able find the underground connectors I told you about attached to a different tree.”

When I first started searching for what I then called the Big Red One (shoutout to Samuel Fuller), I had two motives. The first was to find and share a rare and special conifer with my grandchildren; the second was more self-serving.

If I could find this tree, an old growth remnant thriving in the heart of our city, it would be news that I fantasized might translate into a tourist attraction like the Nat Geo tree, a way for everyone to experience the dynamic power of ancient forests and, by extension, begin to understand the importance of preserving them—without traipsing into the wild.

But now I’m less convinced this is a good idea. I have recurring daymares about trampling bands of Instagrammers and TikTokers laying waste to a majesty established in over 1,000 years of relative solitude.

“I think you have a legitimate reason for concern,” botanist Douglas Justice told me when we stood at the base of the tree, looking high up into limbs the size of tree trunks forming what’s called a cedar candelabra. Justice, curator of collections at the UBC Botanical Garden, was one of the first people I checked in with when I began my hunt, and I’d promised to share the treasure with him if I managed to find it.

As we scrambled awkwardly around the root flare, Justice explained how the luscious, organic layer beneath our feet⁠—composed of leaf litter, old roots, live and dead bugs, and bark in varying states of decay⁠—had not been disturbed by repeated pedestrian traffic or affected by natural disaster. The Suzanne Simard Mother Tree has been free to steep in a thick, dark, porous, sponge-like humus stew creating a rich biodiversity that supports the mycorrhizal fungi attached to its roots.

The thoughtless disruption of this ecosystem will have a toxic effect, as Justice spelled out: “The damage will begin to show itself immediately as the visits increase, with the vulnerable bark at the base being the first most obvious casualty. The real damage—the sapping of the tree’s vitality by the degradation of the soil—will only become apparent after a decade or so.”

The revelation of “a magnificent, ancient tree within minutes of Vancouver’s urban core and a huge population desperate to be close to nature is simultaneously exhilarating and disturbing,” the botanist says, suggesting that a well-designed and executed boardwalk would be one way to  slow the decline and allow people to witness an astonishing tree.

A boardwalk raised above the root-riven forest floor would allow visitors to experience this ancient lady without undermining her fragility.

We need to get on this

Knowing what I now know about the science, I feel that we need to protect this natural monument straight away. My current fantasy is that  some of our biggest local proponents of getting outside—international fashion brands Herschel Supply Co., Lululemon Athletica, Arc’teryx, I’m talking to you—could collaborate with the Vancouver Park Board to build a boardwalk deserving of this uncommon treasure. Could we move quickly if they agreed to underwrite it? And what if Suzanne Simard herself were to get involved with her “new namesake,” helping to develop an adjacent interactive experience based on her research about the ways conifers talk to one another? I know this is a moonshot, but wouldn’t it be sweet.

In the meantime, if you do go searching for the Stanley Park mother tree, I implore you to keep your distance, tread lightly, and refrain from sharing its location while its fragile roots remain unprotected.