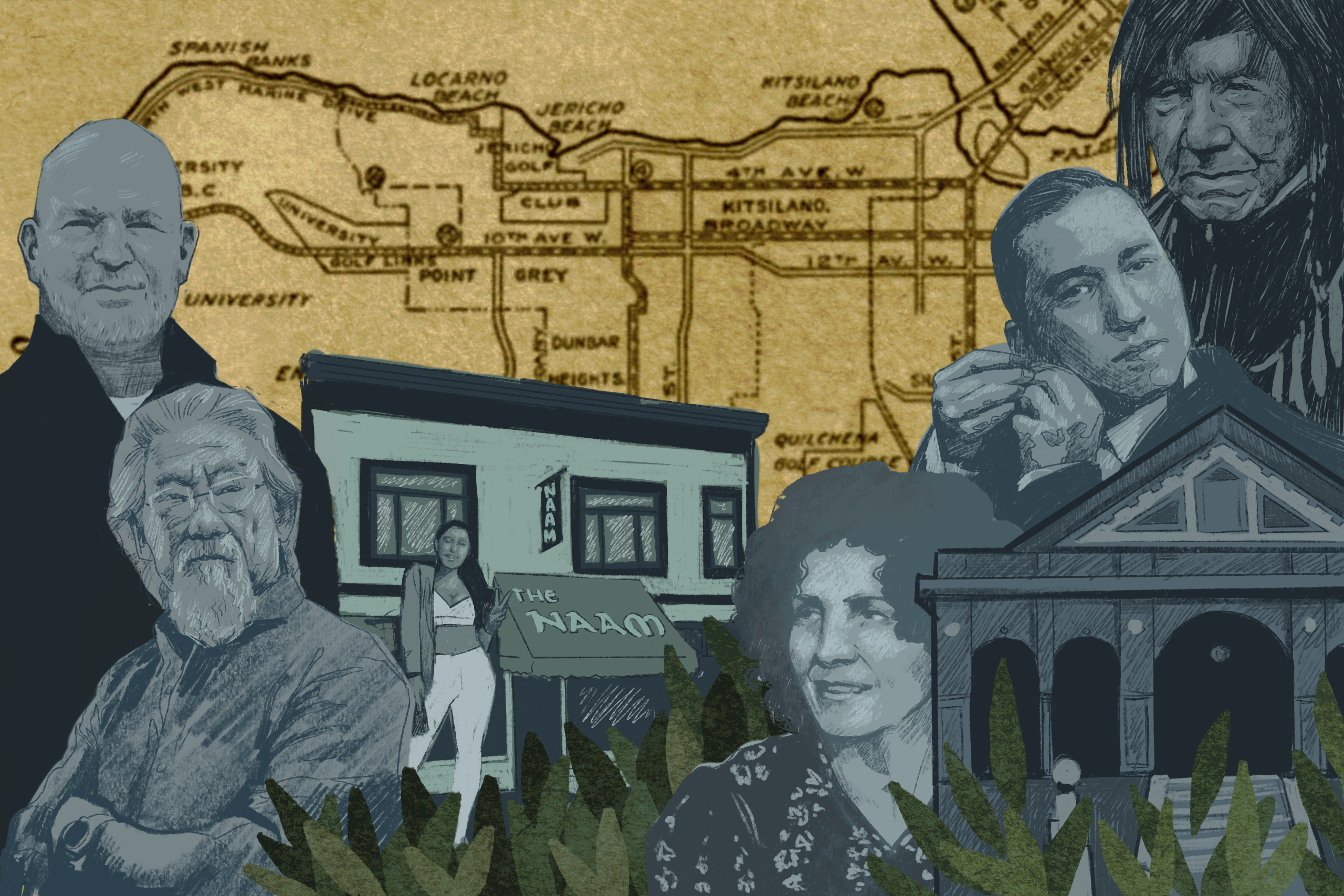 This story is the third in our series on the hidden history of Vancouver’s neighbourhoods. Read more here.

In Vancouver, where housing and affordability are eternally fraught, you seldom find yourself rooting for land developers. But in September, when Khelsilem, chair of the Sḵwx̱wú7mesh (Squamish) Nation, broke ground on a 6,000-unit development on the Sen̓áḵw village site, it felt like an act of reconciliation touching back to Vancouver’s early history. And there is poetic justice in the development proceeding against the wishes of NIMBY opponents in Kitsilano, Vancouver’s spandex and Gore-Tex capital.

Named after Khatsahlanogh, the Sḵwx̱wú7mesh chief whose descendants were forcibly displaced onto a barge headed to the North Shore, the neighbourhood of Kitsilano represents the Platonic ideal of Vancouver, postcard-perfect beaches and water views framed by mountains, thriving multicultural commercial arteries on West Broadway and West Fourth Avenue, a canopied Shakespeare festival, and active, affluent lifestyles (the 2016 census also shows it to be younger, whiter, and more single than the rest of Vancouver). While the area’s self-image originates from its hippie legacy, Kitsilano, or Kits, has more recently become a place where only commodifiable good vibes are desirable.

Precontact, this west-side area was heavily forested, its beaches used for fishing and trading at Sen̓áḵw village. According to Stó꞉lō writer Lee Maracle, the area was “known to the friendly neighbouring tribes as the ‘supermarket of the region.’” Khatsahlanogh’s grandson, August Jack Khatsahlano, lived in Sen̓áḵw, and watched downtown Vancouver burn in the great fire of 1886 from across the Burrard Inlet. In Conversations With Khatsahlano, 1932-1954, by James Skitt Matthews, Jack claims his great-uncle Chief George (Chip-kay-m) and Chief George’s brother-in-law, Hay Not-em, founded the first permanent settlement. “They built canoes there and dried smelts and made traps on the sandbar (Granville Island) for flounders, perch, etc.,” he told Matthews. “They built a big house there, a great potlatch house. Before that, the Musqueam Indians occasionally went there to fish, but never established residence of any kind.”

A fishing area was later claimed by Jeremiah Rogers as a logging camp, known as Jerry’s Cove, a name upcycled into Jericho Beach. In the early settler years, Kitsilano Beach was first given the name Greer Beach, after early homesteader Sam Greer, and served as a popular summer camping spot. By the early 20th century, both Greer and the Sḵwx̱wú7mesh had been pushed out.

As hard as it is to believe now, Kitsilano was, in its early years, a blue-collar resource town. A salmon canning factory could be found on MacDonald Street. In 1908, Canada’s first gurdwara was built for the Sikhs who worked at the False Creek Sawmill and lived on Cypress and Cedar (now Burrard) streets. The area south of Broadway around the Arbutus Corridor housed factories for Vancouver Breweries, Whitely Bros. Sash & Door Factory, McGavin’s Bakery, and other concerns.

Many of the Craftsman-style homes that appeared in the first decades of the 20th century were converted into rooming houses after the Second World War. At 20 and newly married, Alice Munro moved into a basement apartment of a three-storey house in 1952. In her autobiographical story “Cortes Island,” Canada’s only Nobel laureate in literature writes of Kits as being full of “high wooden houses crammed with people living tight” and of reading the novels of Aldous Huxley and Henry Green borrowed from the Kitsilano Public Library, where she worked.

During Kitsilano’s hippie heyday, those high wooden houses proved ideal crash pads for those fleeing convention. In Michael Kluckner’s perceptive and wonderfully illustrated novel of the era, The Rooming House, Mary, a young arrival from Toronto, scans rental ads on billboards at Lifestream Natural Foods and the Naam Cafe on West Fourth. “There was nothing there I could afford,” she thinks, “just a few modern apartments for $150 or more.” It was in this milieu where a former U.S. Navy radar operator, Jim Bohlen, and his wife, Marie, met another Quaker couple, Dorothy and Irving Stowe, at an anti-Vietnam War protest in 1968. A few years later, they founded the environmental group Greenpeace.

The vestiges of this crunchy version of Kitsilano can still be found. But the spirit of Kits in the 1960s has materialized into a high-end lifestyle cult. Lifestream is gone, but you can now find Whole Foods. Along those spandex lines, yogawear company Lululemon was founded in Kits with the aim to “elevate human potential by helping people feel their best.”

Lululemon’s billionaire founder, Ayn Rand devotee Chip Wilson, currently owns a 15,694-square-foot Kitsilano mansion worth $73 million—a value undoubtedly enhanced by being steps away from a $6.4-million bike and pedestrian roadway completed in 2017 on Point Grey Road. (The value of Wilson’s waterfront home is crazy money but also a reflection of local real estate prices as a whole. Political hay was also made in 2013, when it was revealed that environmentalist David Suzuki lived in a Kits home worth over $8 million that he and his wife had purchased four decades earlier for $145,000.)  A few months before that, his neighbour, then-Vancouver mayor Gregor Robertson, recused himself from the debate over the infrastructure project because he had recently bought a home nearby.

As history has shown, sweetheart land developments have a way of working out if you have wealth and power. Perhaps that’s why the Sen̓áḵw development, which promises housing for 6,000 families and $10 billion in long-term revenue for the Sḵwx̱wú7mesh is a richly satisfying and long overdue victory. Only in 2003, after a hard-won court decision, were 10.5 acres returned. “It is about time First Nations create value from the tiny parcels of reserve lands we were left with after past racist governments seized nearly everything,” Kheilsem wrote in an op-ed.