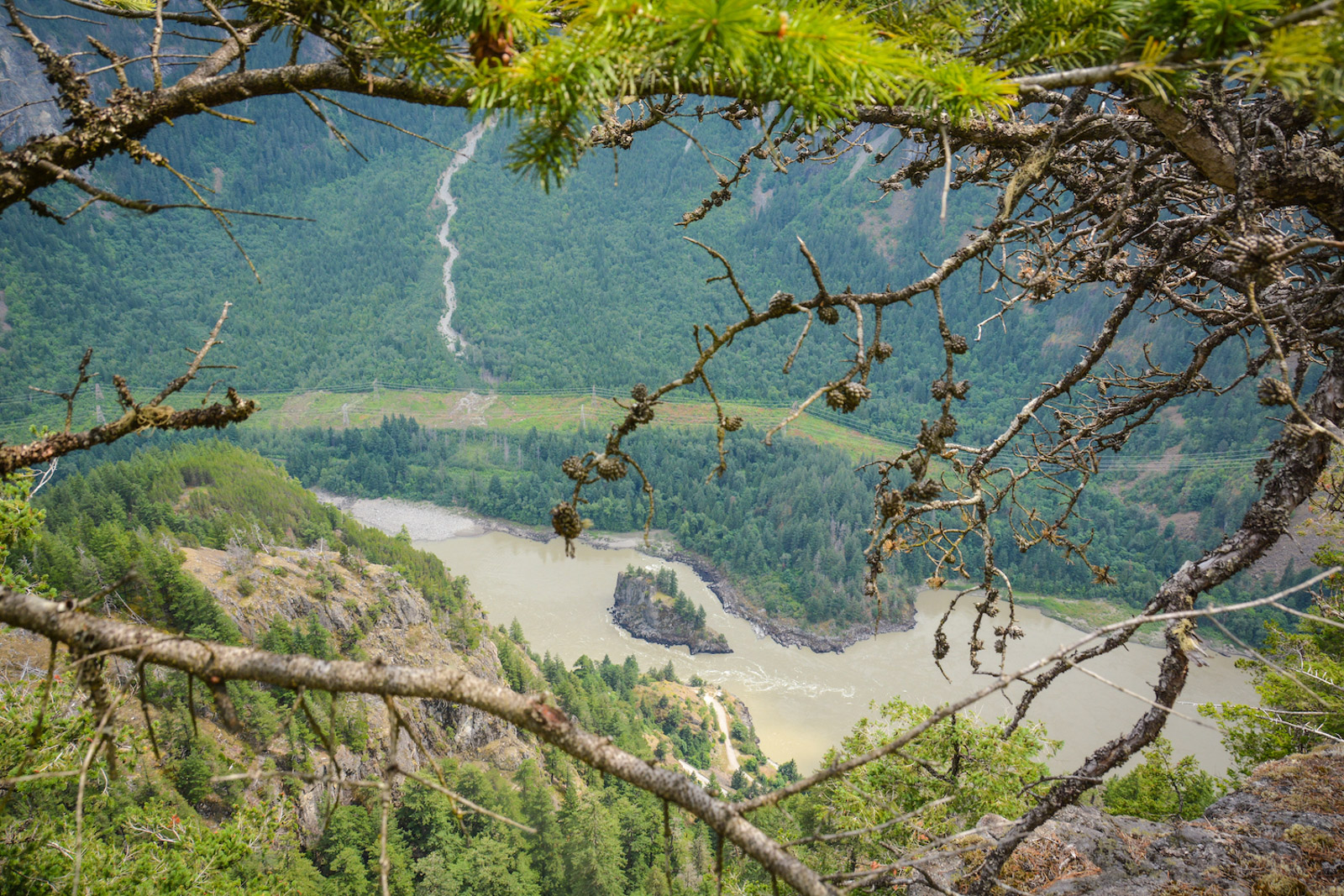 In his new book, Destination Hikes In and Around Southwestern British Columbia: Swimming Holes, Mountain Peaks, Waterfalls, and More, former Georgia Straight journalist Stephen Hui leads the way to 55 beautiful hikes near Vancouver. From panoramic peaks near Whistler to sparkling lakes in the Chilliwack Valley, Hui also sheds light on the culture, history, and nature of the trails. This excerpt is published and reprinted with permission from Greystone Books.

Known locally as Lynky, Mount Lincoln offers commanding views of historic Yale and the foot of the Fraser Canyon. Steep and fun—with an average grade of 37 per cent—the trail to the top makes for a satisfying little outing that’s off the beaten path. Mount Lincoln lies in the territories of the Nlaka’pamux, Stó:lō, and Yale First Nations.

Vehicle: From its junction with Highway 7 (Lougheed Highway) in Hope, go eastbound on Trans-Canada Highway 1 for 21 kilometres to Yale. Just past the Yale Creek bridge (and before the Yale Tunnel), park in the large gravel pullout on the right—by the entrance to Toll Road (opposite Chapman Road) and across the railroad track from a Yale First Nation reserve. 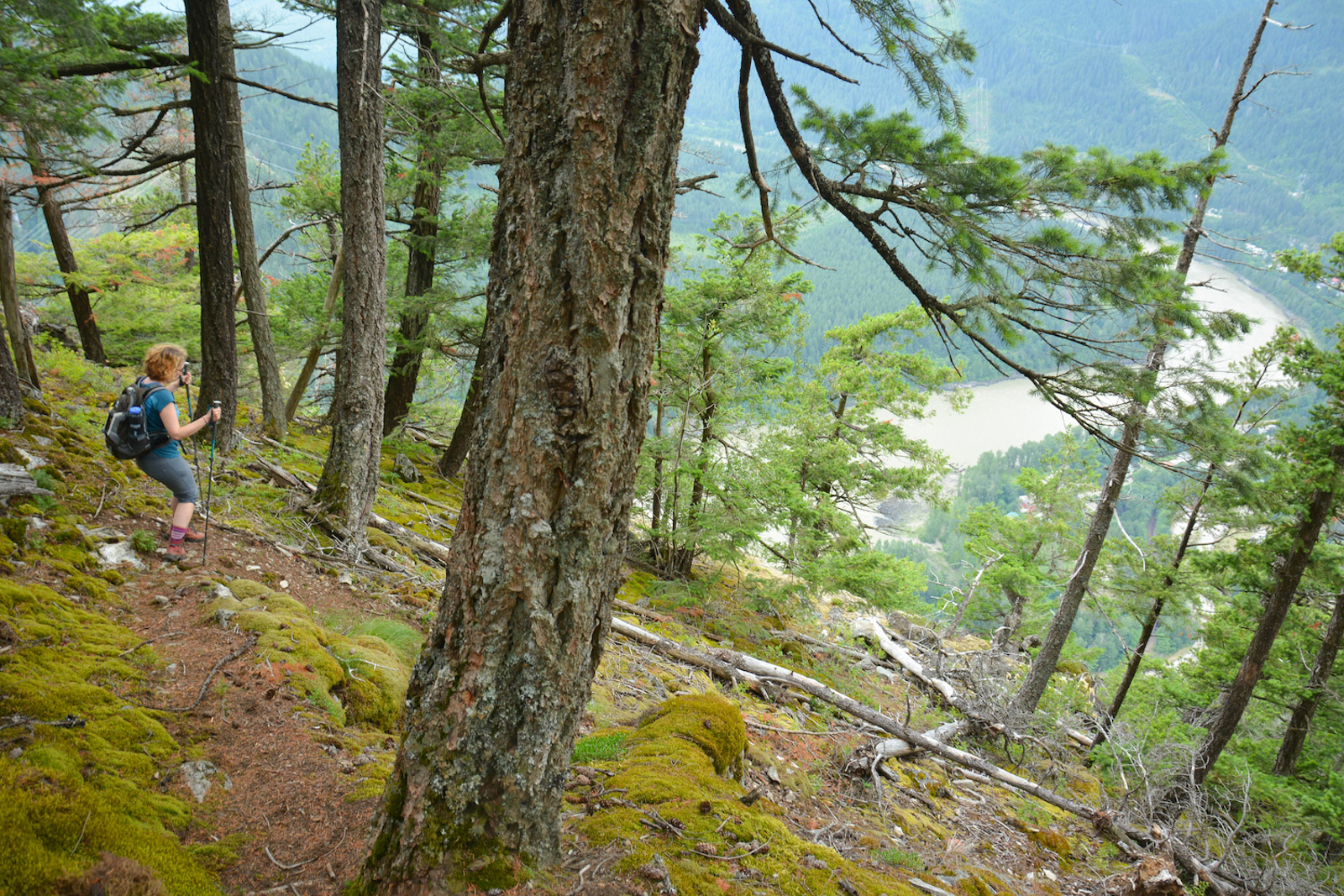 Spot the Mount Lincoln (Lynky) Trail sign on the north side of Highway 1, 150 metres east of Chapman Road. Look both ways before carefully crossing the highway. The narrow, rocky path is steep right off the bat and hardly lets up. Switchback between fir trees and mossy outcrops. Pearly everlasting, pink corydalis, and red paintbrush bloom on these slopes. Green spleenwort, a rock fern, and Oregon grape, a berry-producing shrub, grow here as well.

Soon you can look down at Yale (X̱wox̱welá:lhp in the Halq’eméylem language of the Stó:lō people). Traffic noise from the highway intrudes, but the sound of trains on the Canadian Pacific and Canadian National Railway lines adds to the historic flavour of the hike. Pass under an old cable, and cross a boulder field below a cliff. Knotted ropes tied around a fir trunk assist with a fun fall-line section.

Continue up through mossy ground, sticking to the main trail, which is well defined but

scarcely marked. Pink flagging indicates a leftward bend in the open woods. Sticks and rocks block side paths. Take care not to trundle loose rocks onto hikers below. Pass beneath an overhang. A rope helps with the next bit.

Reach a viewpoint at a bend in the trail. The cliffs of Mount Allard lie across the turbid Fraser River (Stó:lō in Halq’eméylem, Quoo.OOy in Nlaka’pamuchin). The mountain’s namesake is Ovid “Chatelain” Allard (1817–1874), who ran Fort Yale and Fort Langley as a Hudson’s Bay Company clerk. Mount Oppenheimer lurks behind Yale, which is named for “Little” James Murray Yale (1798–1871), a chief trader for the HBC.

The next part of the trail is not for acrophobes—and probably foolhardy when wet.

Traverse precariously below a cliff with aging ropes, bolted down, for aid. Scramble up through a gap in the rock. Follow pink tapes through living pines and deadfall to the granodiorite summit, passing the remains of an old television rebroadcasting transmitter.

colluvial fan at its base, dominates the scene. Lady Franklin Rock (X̱éylx̱elamós in

Halq’eméylem), a sacred transformer site, is the narrow outcrop poking out of the Fraser River. You’re standing in the Lillooet Ranges of the Coast Mountains; the Cascade Mountains rise across the great salmon river. As for the Fraser Canyon, it runs from Lytton to Yale. The portion between Spuzzum and Yale is known as the Little Canyon. Beneath your feet, Highway 1’s Yale Tunnel cuts through the mountain.

Retrace your steps to return to the trailhead and Yale. The Fraser Canyon gold rush of

1858 turned Yale into a boomtown. It even had its own Chinatown. Today, the On Lee property, part of the Yale Historic Site, commemorates the history of early Chinese settlers in the Fraser Canyon. Sadly, the On Lee House, dating back to the 1880s, burned down in the 1980s. 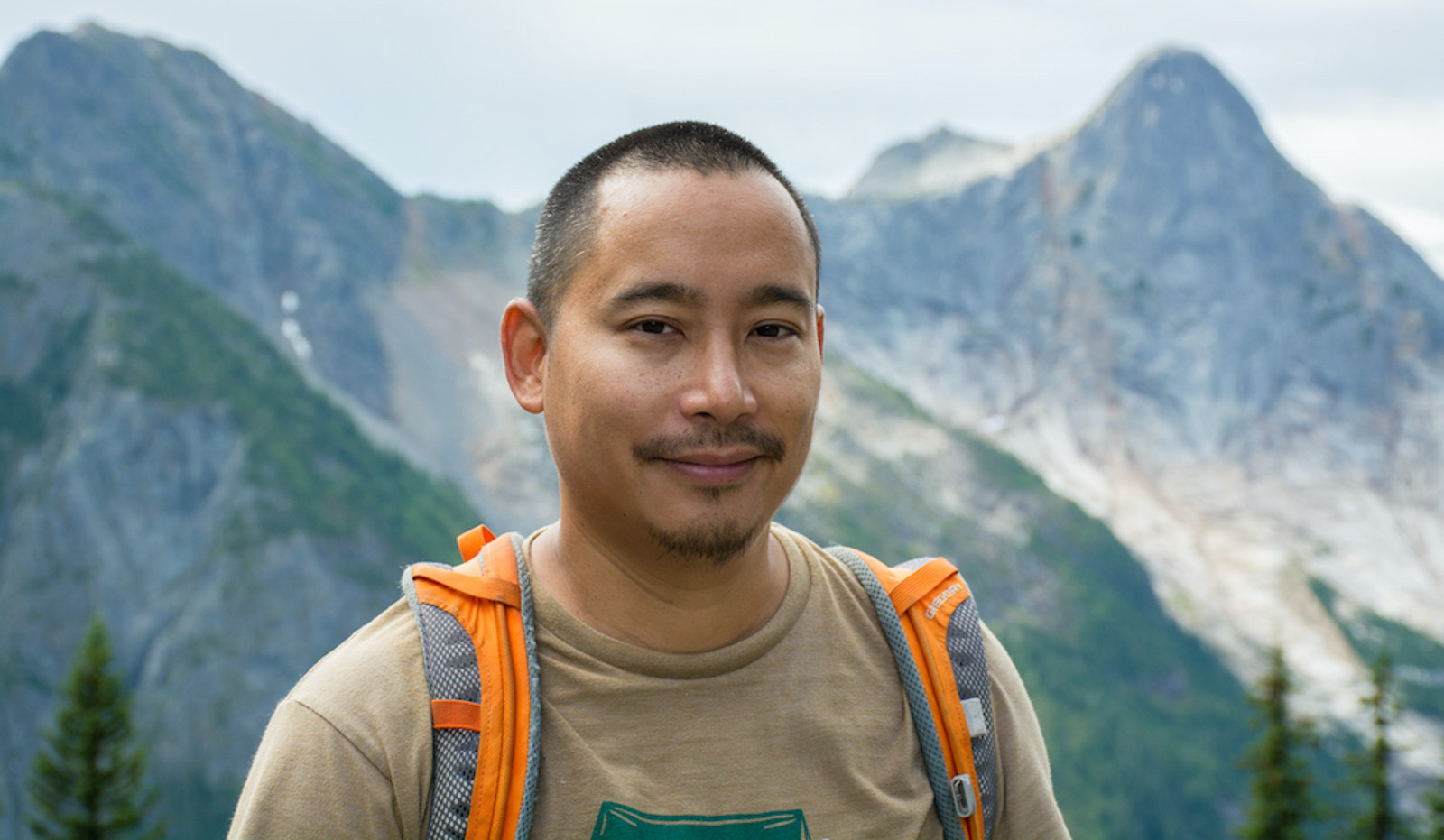 The author at Zoa Peak. Photo by Joan Septembre.

At Alexandra Bridge, you can stroll across the Fraser River like it was 1926. That’s the year the historic suspension bridge was completed as part of the Fraser Canyon Highway—using the abutments of an 1863 span built for the Cariboo Wagon Road, which in turn replaced a cable ferry at Spuzzum dating back to 1858. Alexandra Bridge Provincial Park also highlights the construction of two transcontinental railways through the Fraser Canyon.

Access the park via Trans-Canada Highway 1, north of Yale and just upstream of the 1962 bridge currently in use. It’s a 10-minute walk to the historic bridge via remnants of the

1926 road. In 1985, the Fraser Canyon transportation corridor was federally designated as a “national historic event.”