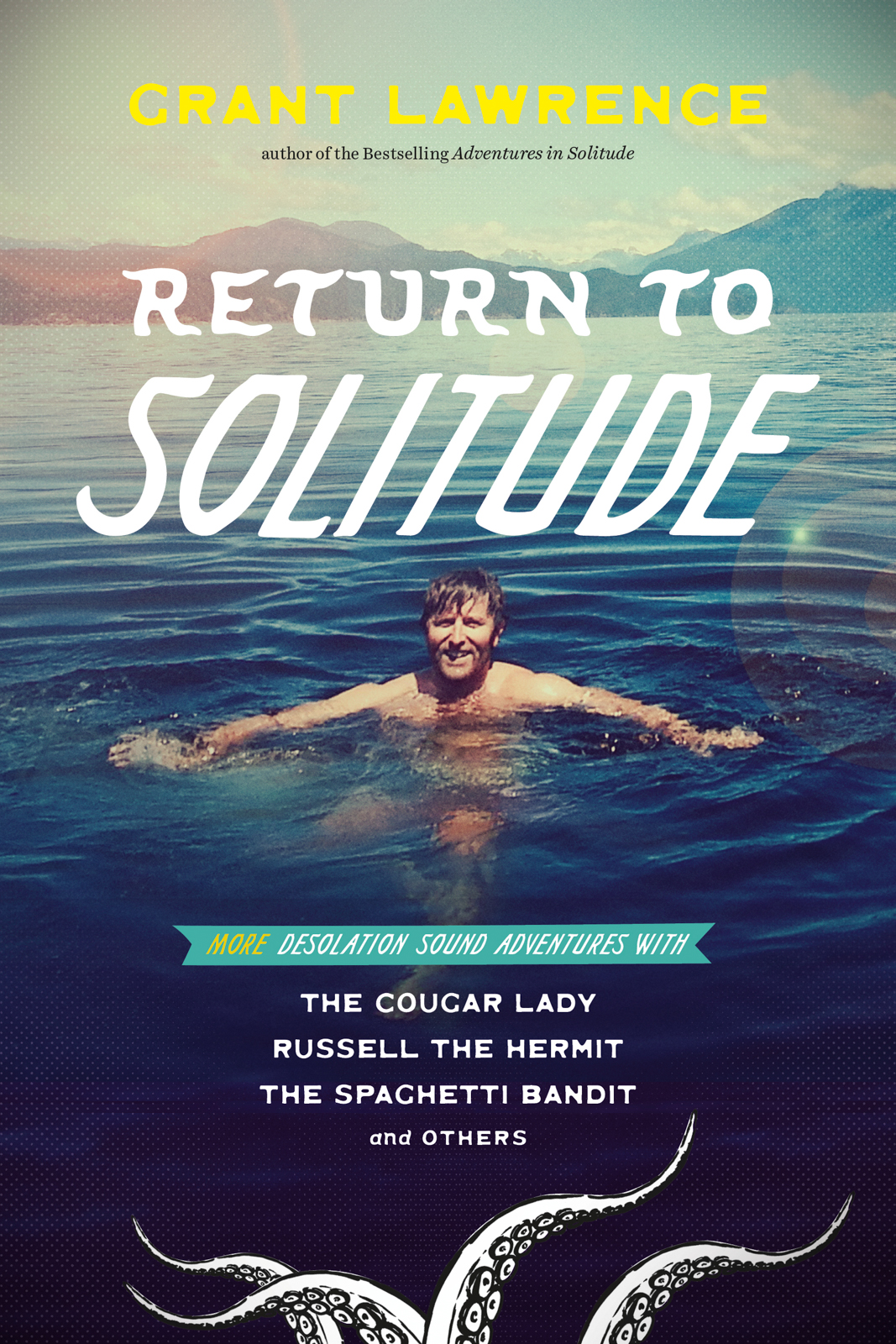 In the sequel to his bestselling memoir Adventures in Solitude, broadcaster, musician and author Grant Lawrence heads back to British Columbia’s beautiful Pacific coast in his new book Return to Solitude: More Desolation Sound Adventures with the Cougar Lady, Russell the Hermit, the Spaghetti Bandit and Others. In this excerpt, Lawrence tells a story of his mentor, the wily, hirsute, and unemployed Russell the Hermit, as Russell attempts to reach Desolation Sound by walking across the Coast Mountain Range through wild and dangerous terrain. The book is out April 30 from Harbour Publishing.

Much like Russell had pressured his wife into the Ontario wilderness, and his ex-girlfriend Danielle to travel west, he tried to convince his new girlfriend Audrey to journey to the coast. His ambitious plan was to hike as the crow flies to Linda and Wayne’s new property, without following any train tracks, roads or human-made trails, over the epic and towering Coast Mountain Range which rose from the ocean like the jagged teeth of a sawblade.

After laying on the charm and persuasion, Audrey agreed. Russell found himself light on cash—again—so he cajoled Audrey to foot most of the bill as they gathered the supplies they would need for weeks in the bush.

Bedrolls, tarps, rucksacks, freeze-dried food, emergency flares, canteens, a compass, a topographical map, a machete, rope and, for Russell, an M1 rifle with a thirty-bullet clip. They also brought along an ounce of marijuana and some hallucinogenic drugs they were saving for the summit of the range.

Audrey didn’t have a lot of hiking experience and didn’t even own a pair of hiking boots, so Russell took her to the local outfitters, where he picked out the best set of boots her money could buy. They started training for their journey in the foothills of Kamloops. Audrey took a month off work for the trek and a visit with her sister, and finally they were set.

Russell did a landslide of preparation for the trip, in terms of what to bring, and did deep-dive research into the flora and fauna of the region, as well as the sasquatch, which he was still convinced was real. But he had little information on the geological nature of the area that he had chosen for them to cross over. He trusted that what he saw on the maps was what he would find when they arrived, basing their route on the shortest distance from the interior to the coast. 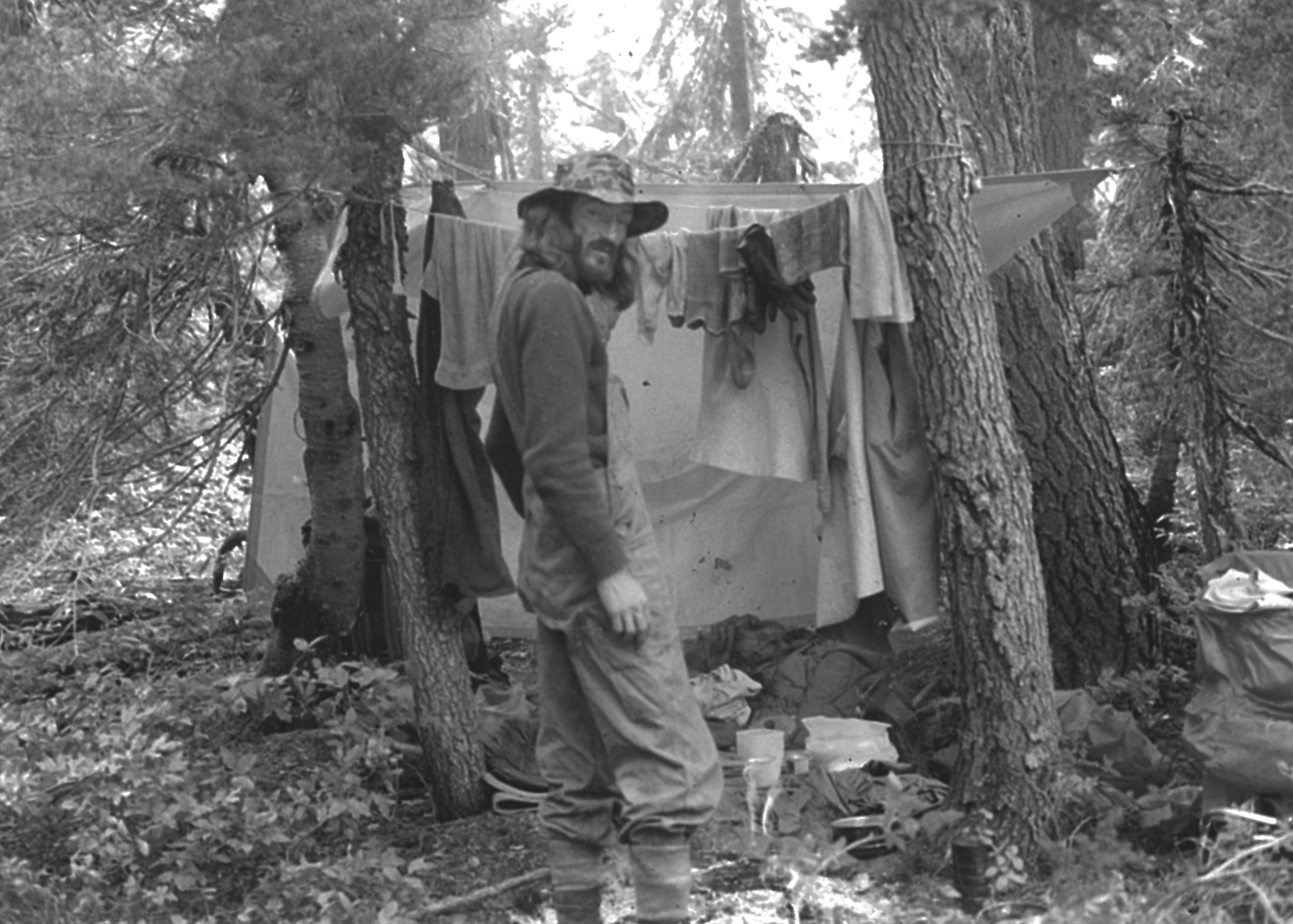 What Audrey and Russell didn’t know was that the route Russell had chosen—following Meager Creek up into the mountains—was one of the most seismically unstable areas in the Coast Mountain Range. In fact, scientists have posited that Mount Meager, which is a volcano, could be the most volatile mountain and most active avalanche area in all of Canada.

Friends drove the pair as close as they could to the confluence of the Lillooet River and Meager Creek near Pemberton Meadows, BC. On September 1, 1977, Audrey and Russell entered the bush. Russell’s pack weighed about sixty-five pounds, Audrey’s about thirty-five.

Within an hour of hiking along a decommissioned forestry road to find their entry point into the bush, Russell realized he was too heavily weighed down. He had ambitious plans to capture a sasquatch on film and to document their trip in photographs, but his camera equipment was cumbersome: the various straps, cases, lenses and stands were affecting his mobility. He was planning to wrap up the gear and stash it in the forest to pick up later, when they spotted a lone figure on the road ahead.

It wasn’t Russell’s sasquatch, but rather a survey geologist, rugged and muddy and weighed down with his own equipment. He offered the pair a friendly greeting, but when he heard of their plans, the geologist sized them up and extended an ominous warning, strongly suggesting they take heed. Two years before, on July 22, 1975, a massive avalanche killed four geologists who were conducting geothermal studies in the area for BC Hydro. They had been working on a sandbar at the confluence of Meager and Devastation creeks when the slide hit.

According to a Vancouver Sun article, “the slide originated in a glacier and plowed down the narrow valley to the Lillooet River, gouging out tree-covered slopes on either side of Meager Creek for a distance of about one and a half miles. It was a huge mass of mud, rock and chunks of ice about a quarter of a mile wide and up to 100 feet deep.”

The slide hit so fast that the men, who were equipped with two-way radios, didn’t even have a chance to send out a mayday. They were buried alive, and it was right where Russell and Audrey were headed. The geologist in front of them had been sent in to take a sample from another recent landslide. Besides the instability of the slopes, he warned them, the bush in September was thick with grizzlies fattening up for the winter. 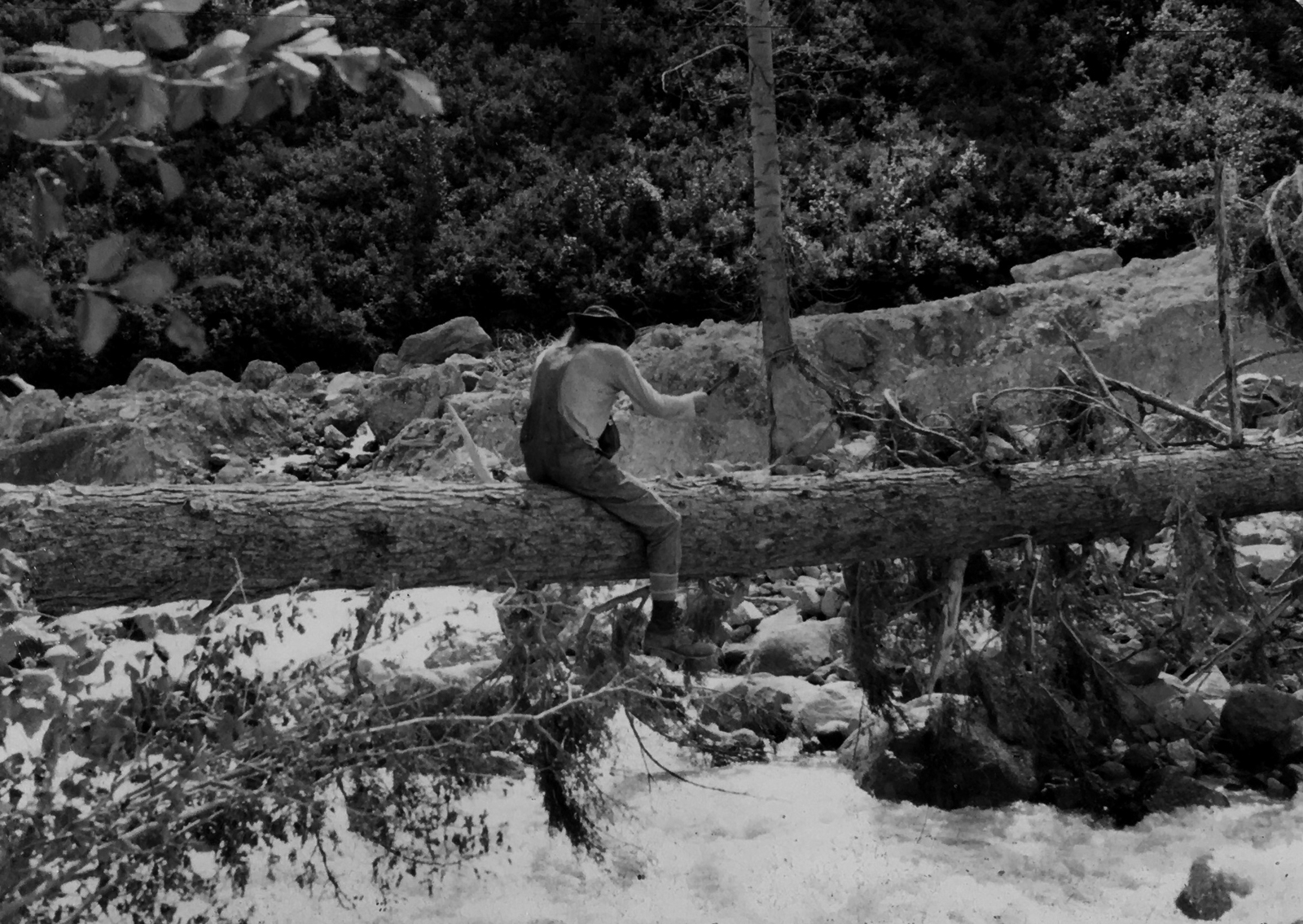 Audrey wanted to reconsider the adventure right then and there, but Russell was confident, patting the folded map in his breast pocket and the rifle slung over his back.

“We’re well prepared for anything!” he declared, trying to assure both the geologist and Audrey. “Seen any sasquatch?”

The geologist smiled, his teeth a pearly contrast to his muck-covered face. He assumed Russell was kidding. Russell did admit to the geologist that they were a little overloaded. The man reluctantly agreed to heft most of Russell’s camera equipment to his waiting truck so that Russell could collect it in Vancouver at journey’s end. The geologist handed Russell his card, slung the camera gear onto his shoulders and wished the pair good luck. With a wave, he continued walking in the direction of civilization. It was all Audrey could do to stop herself from running after him. The geologist was the last human they would see for a long time.

“Are you sure we’re up for this, Russ? Grizzlies? Avalanches?”

“The bears will steer clear, and the avalanches are one in a million, babe. Let’s have some lunch, a toke—it’ll be fine.”

Audrey still clearly remembers that after another hour or two of hiking, before they ran out of any semblance of the road, the two came across a plaque memorializing the geologists who had been killed: Charles Leighton, forty-eight, Robert Smith, thirty-one, Donald Rupert thirty, and Solita Moraal, twenty-eight.

Russell found a nearby flat rock and scratched the message “Audrey and Russell were here, Sep 1 1977.” From there, the hike became a bushwhacking expedition, far more challenging than anything they had trained for in the wide-open, arid terrain around Kamloops. Their packs repeatedly got hung up on bushes and overhanging limbs, as they followed the Meager Creek into total wilderness.

Russell remained full of positivity, even as the journey became more and more of a slog. On the second day, they came across a massive mound of debris, the remnants of the slide, that completely covered the creek. Once they climbed over it, they discovered a large lake that wasn’t on Russell’s map. The avalanche had completely rearranged the terrain. They had to backtrack to get around the lake, as well as more obstacles like slide debris, waterfalls, swamps, submerged trees, and deadfall, always having to guess at which was the safest route.

The two had been looking forward to soaking in the Meager Creek natural hot springs, but that landmark too was a casualty of the recent seismic activity—they could see the steam rising through the rubble, but the pools were buried.

“We were never walking in a straight line,” Russell sighed many years later. “By day two we were probably adding about thirty percent more distance to our journey from the backtracking and sidestepping alone.”

After a couple of days, Audrey was exhausted and told Russell that his “whole deal” was crazy. She wanted out. Russell was quick to calm her down with a joint, urging her to press on and to follow The Dream. “His dream,” as Audrey would later point out to me. But she sucked it up and bravely moved forward into further treacherous terrain.

Other than coming face to face with a stinky wolverine, which hightailed it in the opposite direction, likely shocked at discovering animals that smelled worse than itself, they didn’t see any evidence of a sasquatch—or any other wildlife to speak of. That was until about two weeks into their gruelling journey, when Russell and Audrey spotted a grizzly bear—the champion of the forest—bulldozing through low brush on the other side of a valley. Later that same afternoon, they came across much closer and more unnerving evidence. 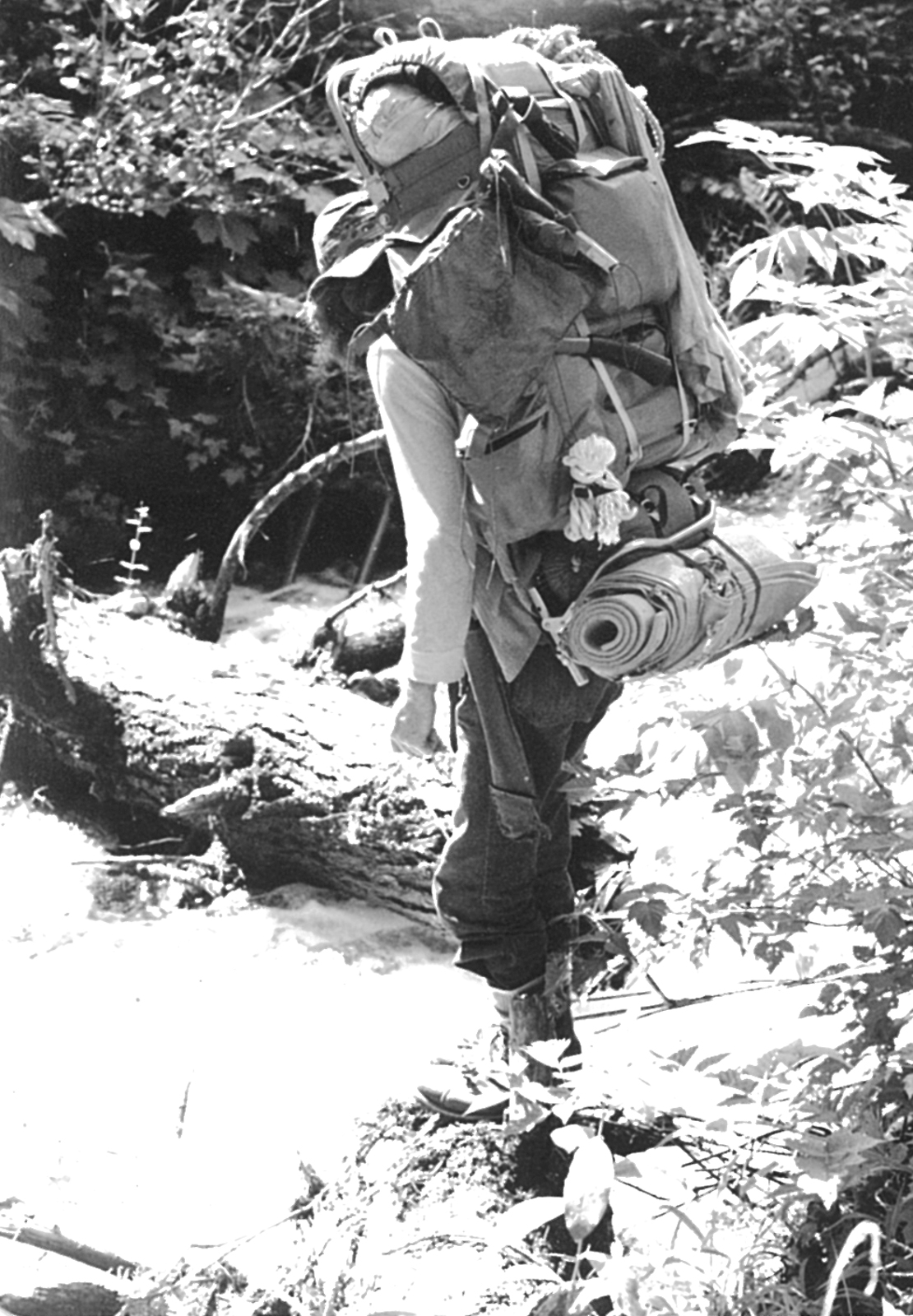 “We found this nice flat gravel bar alongside the creek with all these blueberry bushes, perfect for camping,” Russell detailed. “It was around three or four in the afternoon. As usual, Audrey wanted to keep going, but I liked to set up camp early, and this was a great spot, or so I thought. I was always keeping a lookout for Bigfoot tracks, and when I was sticking in one of the tent pegs, I looked down into the sand and my eyes popped. I called Audrey over. And there I was with both of my boots in one very fresh track.” But the big foot wasn’t Bigfoot. “It was the front paw print of what must have been a huge grizzly. I guess when we came up there, the grizzlies took off. The camp was already set up and I didn’t want to move it, but we realized that these bears were all around us. We couldn’t see them, but I’m sure they could see us. I think Audrey stayed awake for most of the night.”

The night was thankfully uneventful, but Audrey’s nerves were fried. They were a full two-week hike from any semblance of civilization in any direction. That morning on the creekside gravel bar, Russell finally admitted that the threats were real.

He lit a joint and, while exhaling, explained to Audrey that if either of them were to get seriously hurt, by falling or getting mauled by a bear, it would be up to the other to stitch the person up and keep going. Audrey refused, saying she’d shoot off one of their emergency flares instead.

They packed up their camp but were soon forced to leave the Creekside when it descended into a roaring canyon. The pair climbed up until they were hiking along a high and narrow rocky ledge—mountain goat country—with the creek raging hundreds of metres below them. When Russell turned to warn Audrey to watch her step, in an instant, to Audrey’s horror, he was gone.