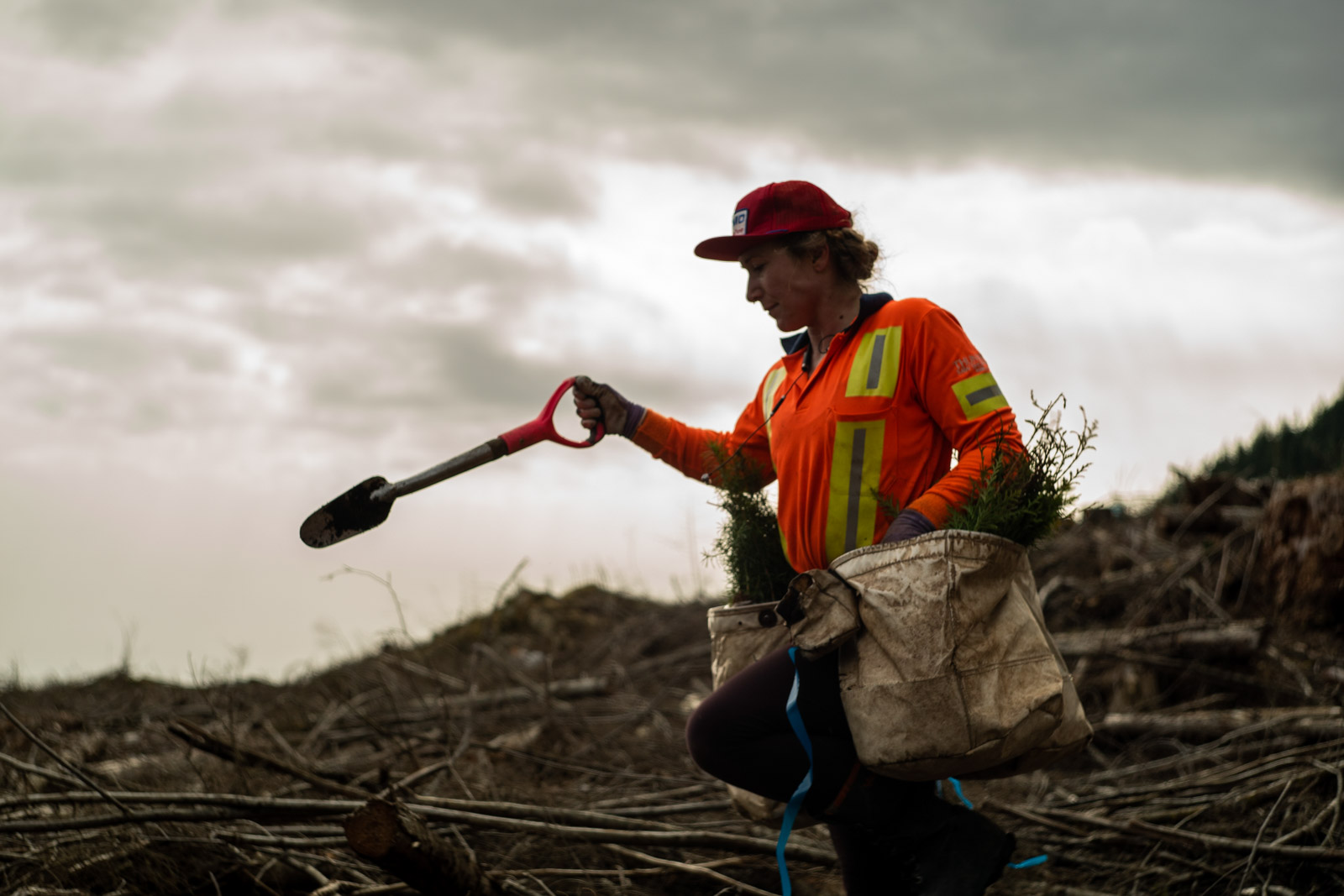 It’s pouring rain in mid-July, and tree planter Everett Bumstead is surrounded by mud in the mountains of B.C. With each step he takes to plant a tree into the drenched earth, the mud squelches under his boots and clings to his shovel. It sticks to his skin, turning everything he touches to dirt like Midas’ gold. But there’s a rhythm to his planting, a sort of meditation as he navigates the slippery terrain and places each seedling by hand into the ground, leaving a trail of life behind him.

At the day’s end, he returns to his camp caked in mud, emotionally and physically exhausted, and 4,300 tree seedlings lighter than when he left that morning. He’s welcomed back by fellow planters as a highballer—the person who planted the most trees in his crew that day.

Each spring, remote tree-planting camps burst into worlds of their own in B.C.’s wilderness. Here, seasonal labourers arrive—armed with their own shovels and tents—from across the country to replant trees harvested for the logging industry. It’s an unconventional job, but one that draws workers romanced by the idea of living in a camp for months, spending their days scrambling through freshly logged land, and planting an average of 1,000 to 4,000 seedlings a day.

“Tree planters are masochists,” laughs Bumstead, who, after four seasons of planting, directed One Million Trees, a documentary about the world of tree planting in Canada. A CBC/Self Hired co-production, the 44-minute film is both a study in human behaviour—sharing the eccentricities of tree-planting culture—and an introduction into this singular facet of the logging industry’s complex system. 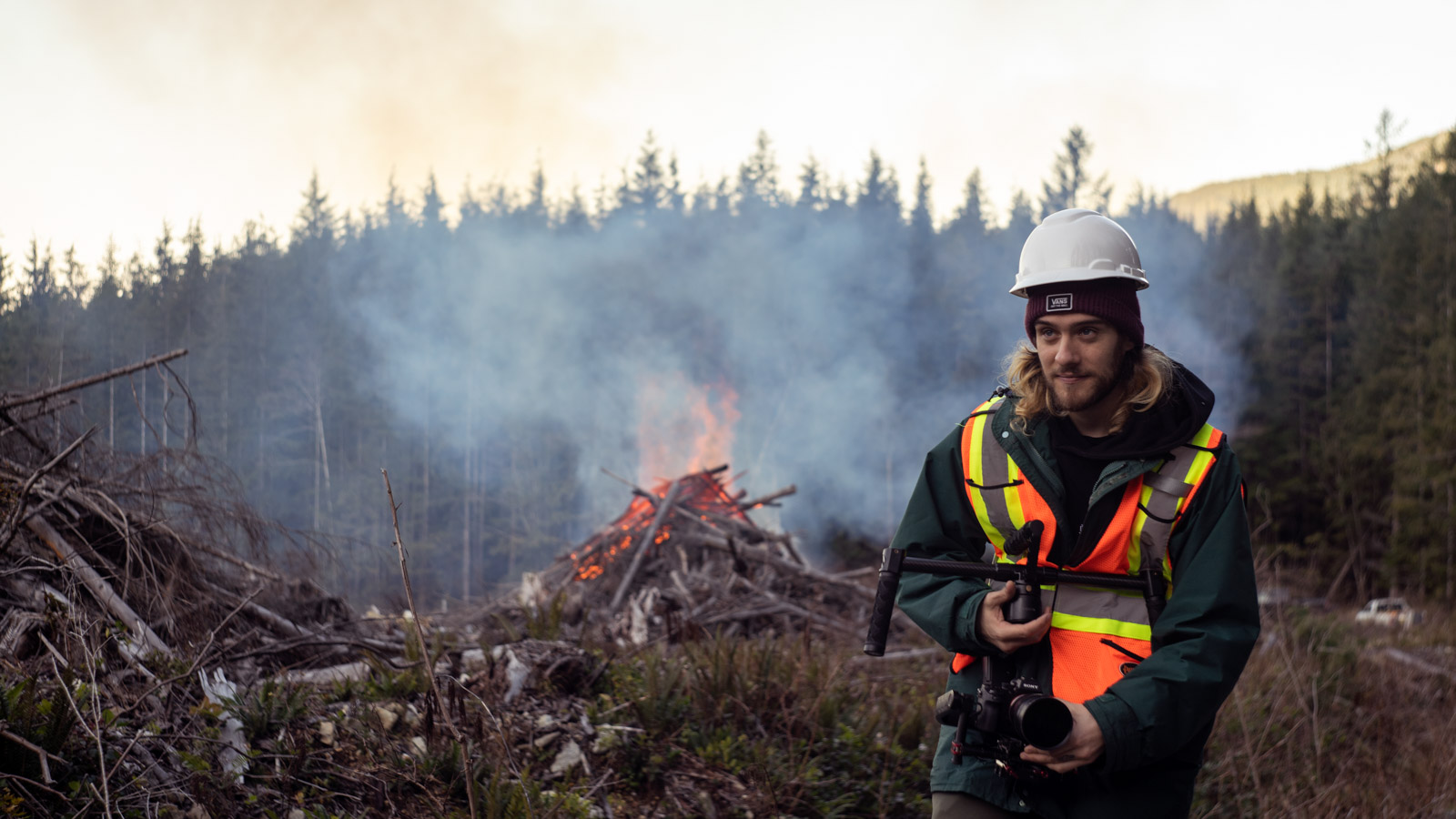 The documentary recounts first-hand experiences of tree planters, often young adults unsure what to do next in their lives, attracted by the money, adventure, and lifestyle of planting. “I had some student loans to pay off, and someone told me you could make a bunch of money in a couple months,” Bumstead says. “The second season, I went back because I felt l missed out the first time since I was so focused on the money. I went back for the people and the fun.”

In the bush, away from the politeness and structure of society, tree-planting camps become their own ecosystems of a different kind of wildness. Parties can last all night, and the work goes on all day regardless of the weather. The job is an arduous tax on the body and mind, but planters—who are paid per tree they put in the ground—keep going.

“One of the worst and most consistent things in my time planting was having a halo of bugs around my head, just feeding on me, like Pig-Pen from Charlie Brown,” Bumstead recalls. “It’s a common occurrence for someone to come back to camp with their face swollen shut from black flies or wasps. You come back to camp, and people walk like hunchbacks or like they have a steel structure instead of a skeleton the way they move.” 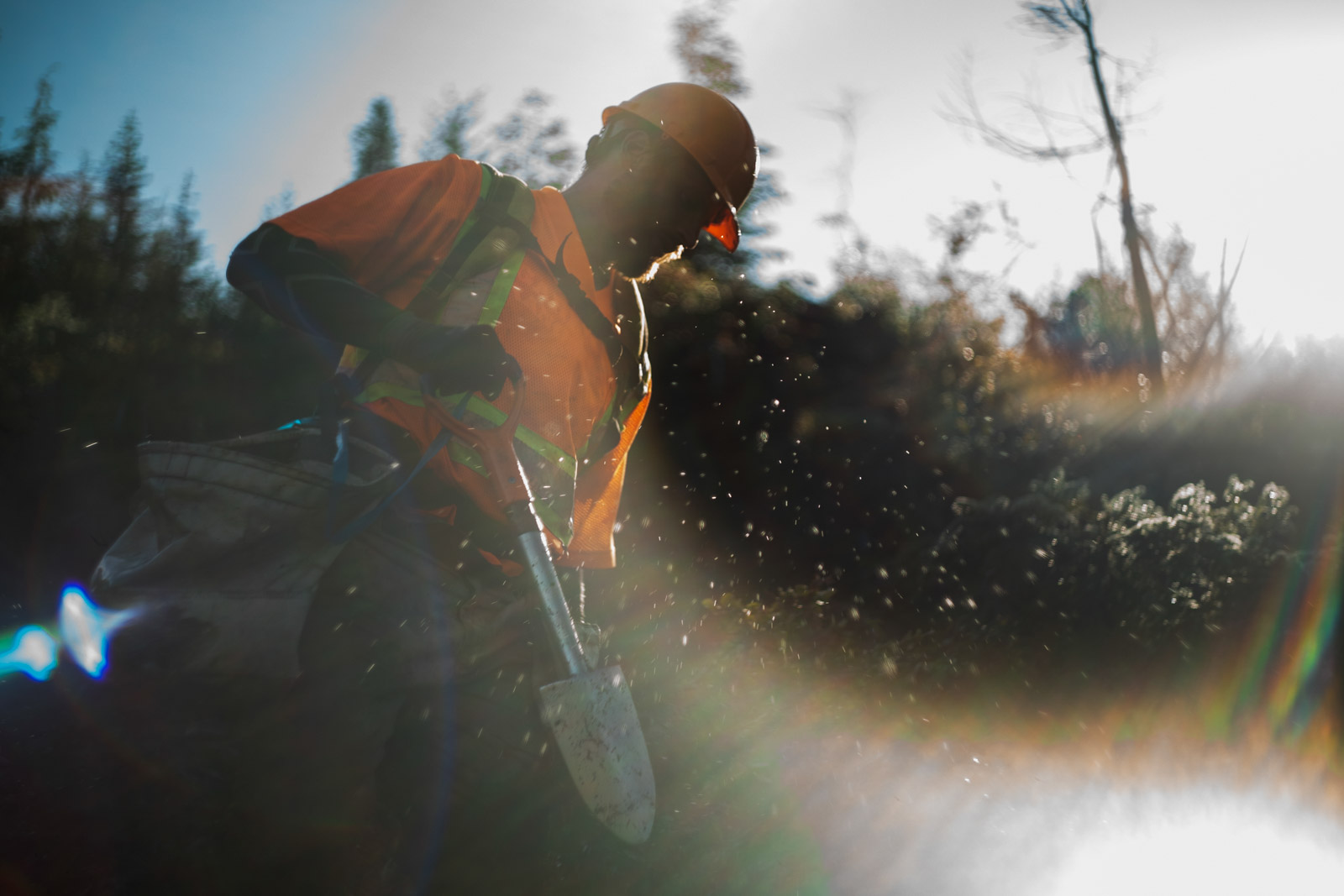 For Erin Bros, whose parents were both planters, the job runs in the family. Eleven years in, Bros recently planted her millionth tree. To her, one of the greatest appeals of tree planting is in the humility it demands. “It doesn’t matter who you are, [planting] is going to challenge everyone in the same ways. If you start to have an ego about it, it will knock you down,” she says. “I appreciate that continuous, humbling process, because I’m never going to be good enough to not fall. I’m never going to be good enough to not be really tired or experience pain or cry.”

The job comes with plenty of risks—whether from the terrain, wildlife, or weather—but there’s something about suffering that is strangely addictive to tree planters. “Everybody says, ‘I love tree planting, but I hate planting trees,’” Bumstead notes. “When you’re in the middle of it, you really want to quit. But when you leave, in hindsight, all you think about are the people who you met and the satisfaction of completing that crazy task. People get addicted to the feeling of overcoming and persevering.”

The physical toll, though painful, is mitigated by the number of trees replenished. To plant life back into the wasteland of a cut block—the debris-filled chunks of freshly harvested land—feels like something to be proud of. Many tree planters often become jaded, then, when the bigger picture becomes clearer: that these trees are replanted for an industry that will cut them down again in 60 to 100 years. 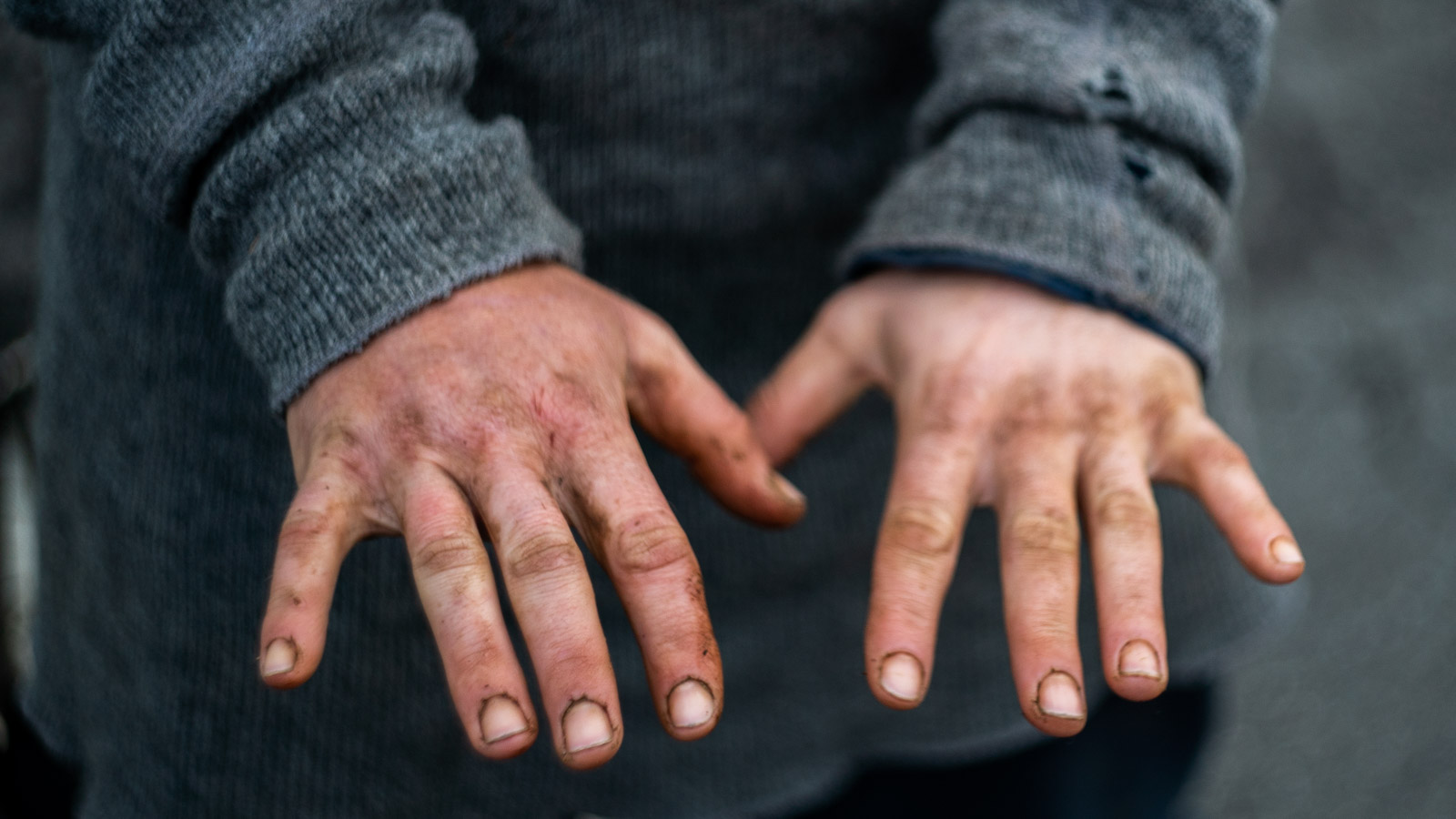 “By the end of my first season, I had come to understand that we’re not doing something special for the environment. I did feel like a pawn in a bigger game,” Bumstead reflects. “It does make me think: Is it worth it? Why are we doing this? Are we doing the right thing? I think that played a part in why I stopped planting as well.”

A man-made forest reads like a contradiction: how can something created for commercial purposes ever be natural? Though tree-planting companies make efforts to plant a degree of mixed species, sometimes it’s not enough to emulate a true forest. “There’s all kinds of biodiversity that you’re not restoring; you’re just restoring the high-yielding timber crops,” Bumstead says. “So it’s not a natural forest; it’s not anywhere close to how it was before colonization.”

“I think it’s always improving, at least,” Bros says. “In general, forestry practices are better than they were 30 years ago. But I will see people who cut corners and do things because it’s cheaper, and it’s like five steps backwards for the one or two steps we took forwards. It’s something I still wrestle with and I think a lot of people wrestle with.”

Ultimately, for some planters, being the ones putting the trees back in the ground is far more appealing than being the ones cutting them down. “We have no idea where we’re going to be in 100 years. And so part of me tries to focus on the optimism that, you know, maybe these spots I’m planting aren’t going to get logged,” Bros says. 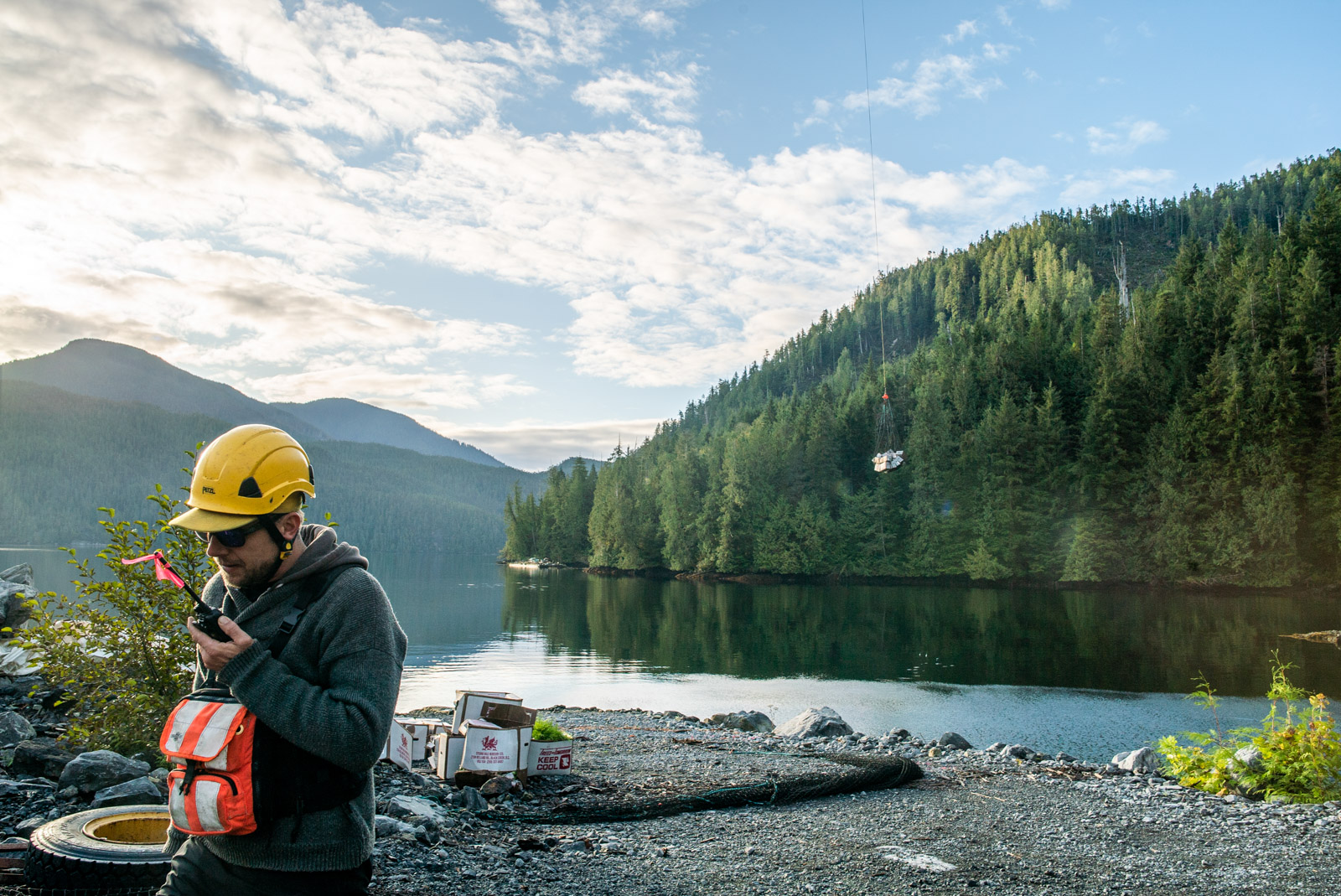 “A big statement of the documentary is what happens to planters on a personal level can be a really amazing thing,” Bumstead says. “But what your place is within the system, I think none of us realize the extent of whether it’s bad or good or what role we really play.”

So, what drives planters back season after season, despite the physical and mental hardships?

“Because I absolutely love it,” Bros says. “I couldn’t walk away.”

For Bumstead, it was the people. “You have your own community with its own language. There are some really impressive people there.”

To be a tree planter is to belong to a secret world, one defined by mud and shovels, isolation and beauty. “The act of tree planting is technically a solitary act. But then you’re sharing this collective experience with everyone else who has ever planted a tree,” Bros says. “You’re surrounded by all these people who have also been through this and have kept going.”

“We all suffer the same kinds of things, and that’s what we share in common,” Bumstead adds.