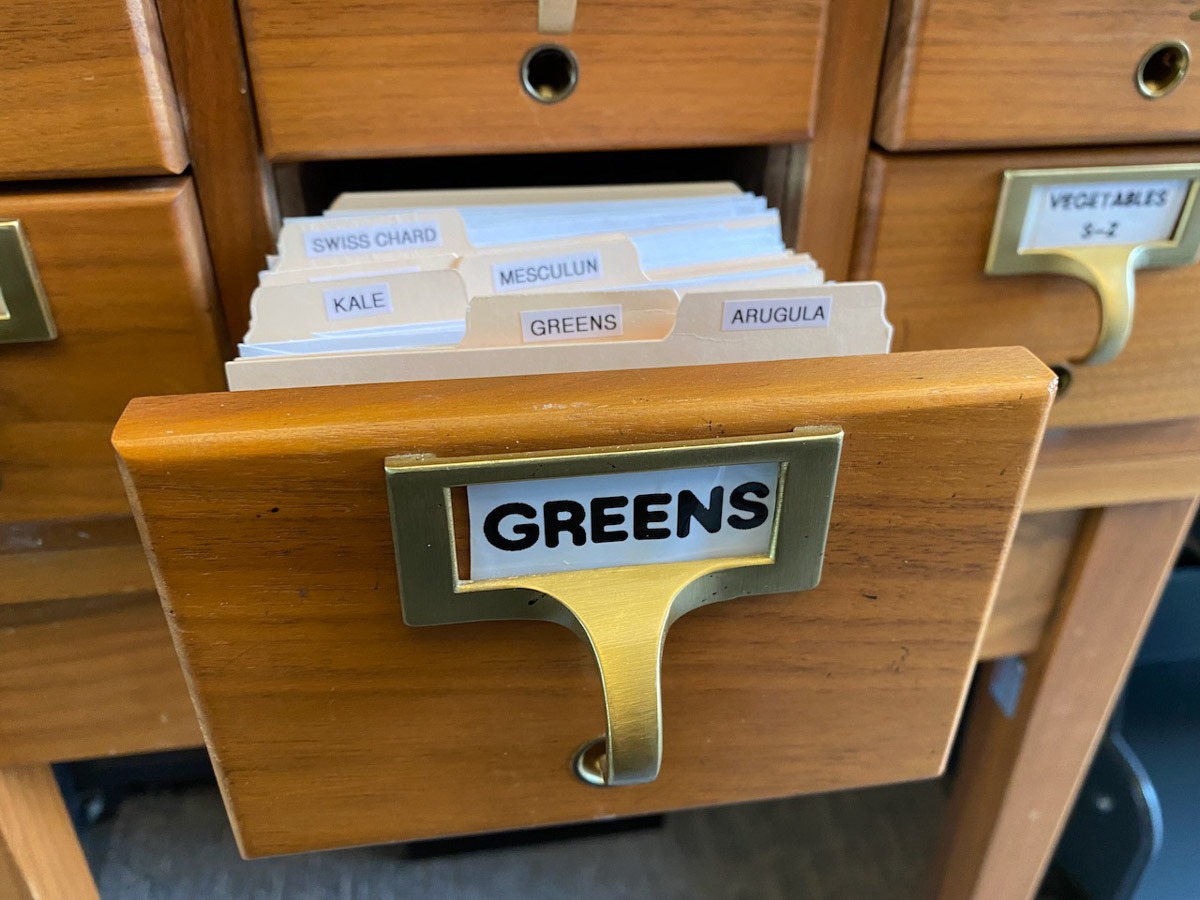 Hidden among aisles of books, I find an old library card catalogue cabinet. Intrigued, I open one of its drawers. Instead of faded index cards, I discover white packets, separated by dividers that read “basil,” “cilantro,” and “rosemary.” I remove a packet from the drawer and shake it, hearing the rustle of small seeds. The sound gives me a thrill, as if I’ve awakened something long dormant that’s now longing to see the light.

The card catalogue holds a seed library, found on the third floor of the North Vancouver City Library. Library members can, free of charge, take home seeds for a variety of vegetables, fruits, herbs, and ornamentals, such as Neptune carrots, Ching Chiang Shanghai pak choy, and garlic chives. Each packet is carefully labelled with the common name, variety, location and year of harvest, and a brief description. One packet of Taylor Horticultural drying beans claims a “delicious nutty flavour and creamy texture”; another, for Genovese basil, explains, “the very best Italian pesto variety of basil.”

Walter Zicha, head of acquisitions and collection management, says the seed library took root in 2014 when he attended a conference of the Pacific Northwest Library Association in Montana and heard a talk on the Five Valleys Seed Library housed in the Missoula Public Library. “I thought that was a brilliant idea, and I had heard of other libraries offering small little collections of seeds,” Zicha says.

Zicha enthusiastically partnered with Edible Garden Project, a program run out of the North Shore Neighbourhood House. “We wanted to have something that was easy to provide to the public and something that promoted sustainability as well as the development of a heritage seed collection in town,” he says.

In 2015, a seed club was born. Patrons who sign up get a membership package with planting charts, a list of books on edible gardening, and information about how to save seeds. “We have been getting a huge number of people donating seeds back to us, which is really great,” Zicha says. Besides purchasing seeds, the library sources from Edible Garden Project and donations from local businesses, such as West Coast Seeds.

Zicha decided to nestle the seed cabinet in a section of the library devoted to books on gardening, botany, and landscape architecture. Word is getting out, with nearly 700 registered members who “borrowed” approximately 1,800 packets last year. “It’s one of those things that has been quietly used. I think the people that want to use it and know about it have been using it and have been telling others about it,” Zicha says. 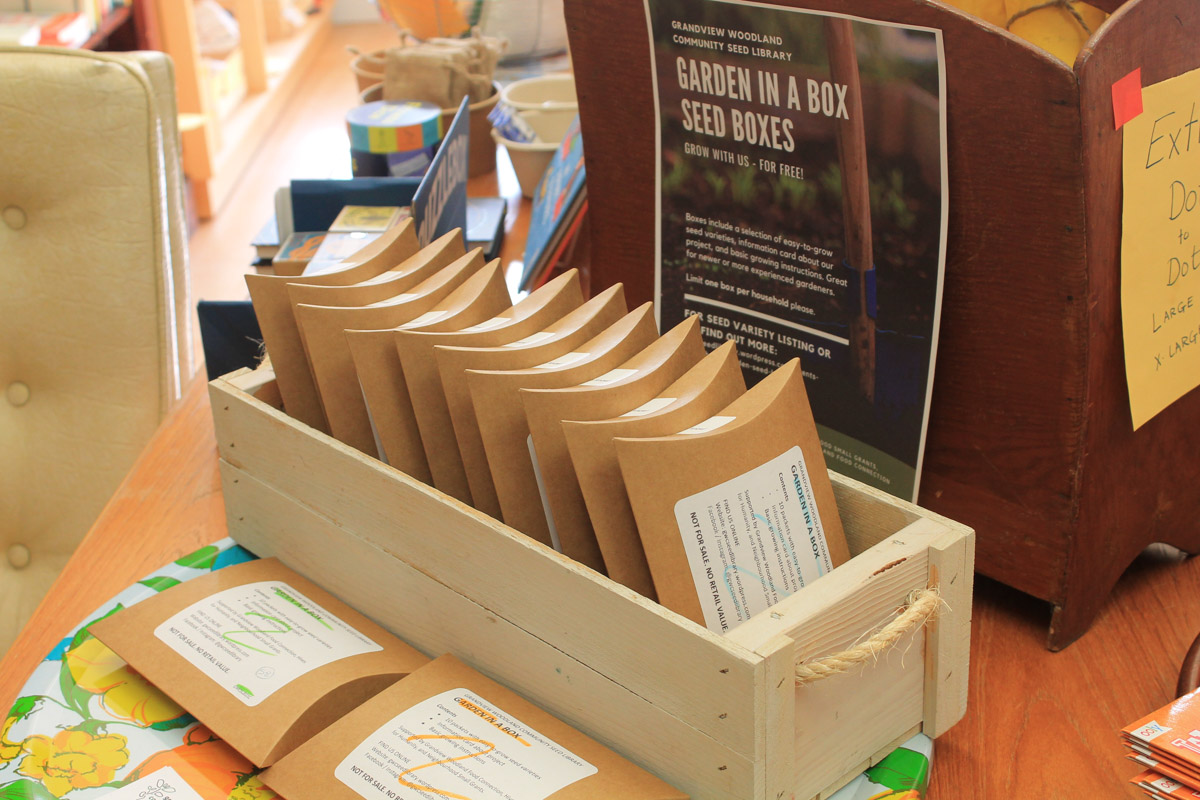 Although the cabinet is used most frequently from February to April, members drop by year round. Zicha says lettuces, tomatoes, beans, and peas are particularly popular in the lead-up to spring, while herbs are favoured in the wintry months.

When I visit the cabinet, I take multiple seed packets, including of Greek oregano and Coyote mini tomatoes, for the small balcony planters I started tending over the last couple of years. According to Chris Mak, lead coordinator of the Grandview Woodland Community Seed Library (GWCSL), I wasn’t the only one who turned to gardening during the pandemic. “The pandemic seemed to change things in a really distinct and resounding way for a lot of people,” she says. “We saw interest in food gardening and demand for seeds rocket up. The reasons ranged from wanting to try a new hobby to concerns about food prices and food security.”

The GWCSL launched in 2018 to promote the local food system in East Van’s Grandview-Woodland neighbourhood. “There didn’t seem to be any seed libraries quite like what we would be: small, run by community members, and with no permanent location,” Mak says, but she was fortunate to get in touch with Ian Marcuse, then community food developer for the Grandview Woodland Food Connection. He, along with a host of other people and with support from programs such as Neighbourhood Small Grants, helped get the GWCSL off the ground.

Like North Vancouver’s seed club, the GWCSL receives the bulk of its seeds from corporate donations, with the rest from community members and purchases. The hope is they’ll get more “returns” from members as the library expands. The seeds they distribute include greens, tomatoes, and peas, with members particularly interested in brightly coloured vegetables and varieties with quirky names, such as rattlesnake pole beans or Gangbusters spinach.

Since starting the seed library, Mak has learned a thing or two about seed saving. For a newbie like me, she suggests keeping ambitions modest and choosing vegetables I enjoy eating and want to grow year after year. “Start with something that’s relatively easy to save seeds from. Beans and peas are great for beginners. Tomatoes are fun, but the process is a little gross,” she advises. Mak recommends open-pollinated varieties, which depend on bees or wind for pollination or are self-pollinating. The seeds grow true to type, meaning they generally remain stable over multiple generations, which keeps things simple for novice gardeners. 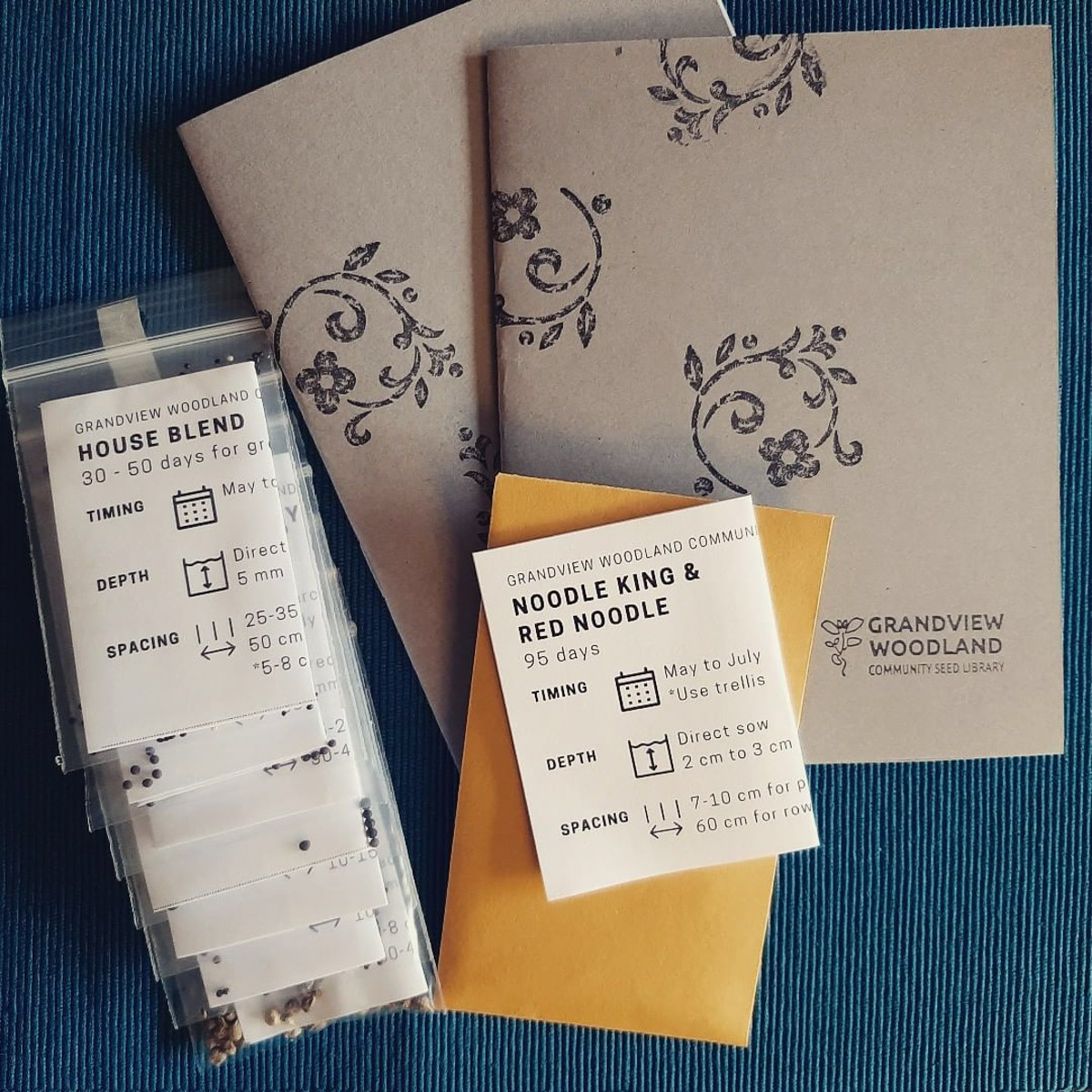 Mak and other seed savers want to adapt some varieties to Vancouver’s climate, especially given the havoc from last year’s heat dome. They plan to run a pilot project over the next few years to grow tomato varieties such as blush and Gold Nugget. “The hope is that the resulting varieties, while broadly still the same ones we started with, will become locally adapted and better able to withstand the range of weather conditions we see here,” she says.

The pandemic meant a significant change to how the GWCSL operated, and after a challenging 2020, it adopted a new strategy. In spring 2021, the seed library partnered with the Learnary on East Hastings to distribute free garden seed boxes with seed varieties perfect for beginners. “Our first drop-off of kits was gone within a week. None of us expected that, and it was kind of a wow moment for us,” Mak says.

The next step was a mail-out kit that celebrated Asian vegetables, such as bok choy and choy sum, as part of GWCSL’s goal to offer seeds that are culturally relevant to the community. “For me and another volunteer—we’re both Chinese Canadian—I think there was this sense of familiarity and connection in creating something that spotlighted vegetables we both grew up eating,” she says. The Asian-themed box was also a way of combatting the anti-Asian hate that increased during COVID-19 by encouraging connection through food. “As a seed library, we’re not explicitly political, but we do recognize that we have an impact and a presence in our community,” Mak says.

The latest garden seed boxes will also contain easy-to-grow plants, including Asian greens such as mizuna. The boxes will be distributed this spring at pop-ups at Britannia Community Services Centre, as well as at the Learnary for easy pickup.

Although Mak says the GWCSL’s main goal is to make seeds and knowledge about growing food as accessible and barrier-free as possible, there are some welcome bonuses. “Gardening doesn’t necessarily seem like the most social or group-oriented activity, but people seem to really connect around it,” she says. Whether talking about their favourite varieties or swapping stories about saving seeds, gardeners make friends around a common interest.

And so after I sow seeds in an indoor pot, I pick up my phone and talk to a friend about what she’s planting in her garden this growing season. Weather willing, my seeds will sprout in a few weeks.