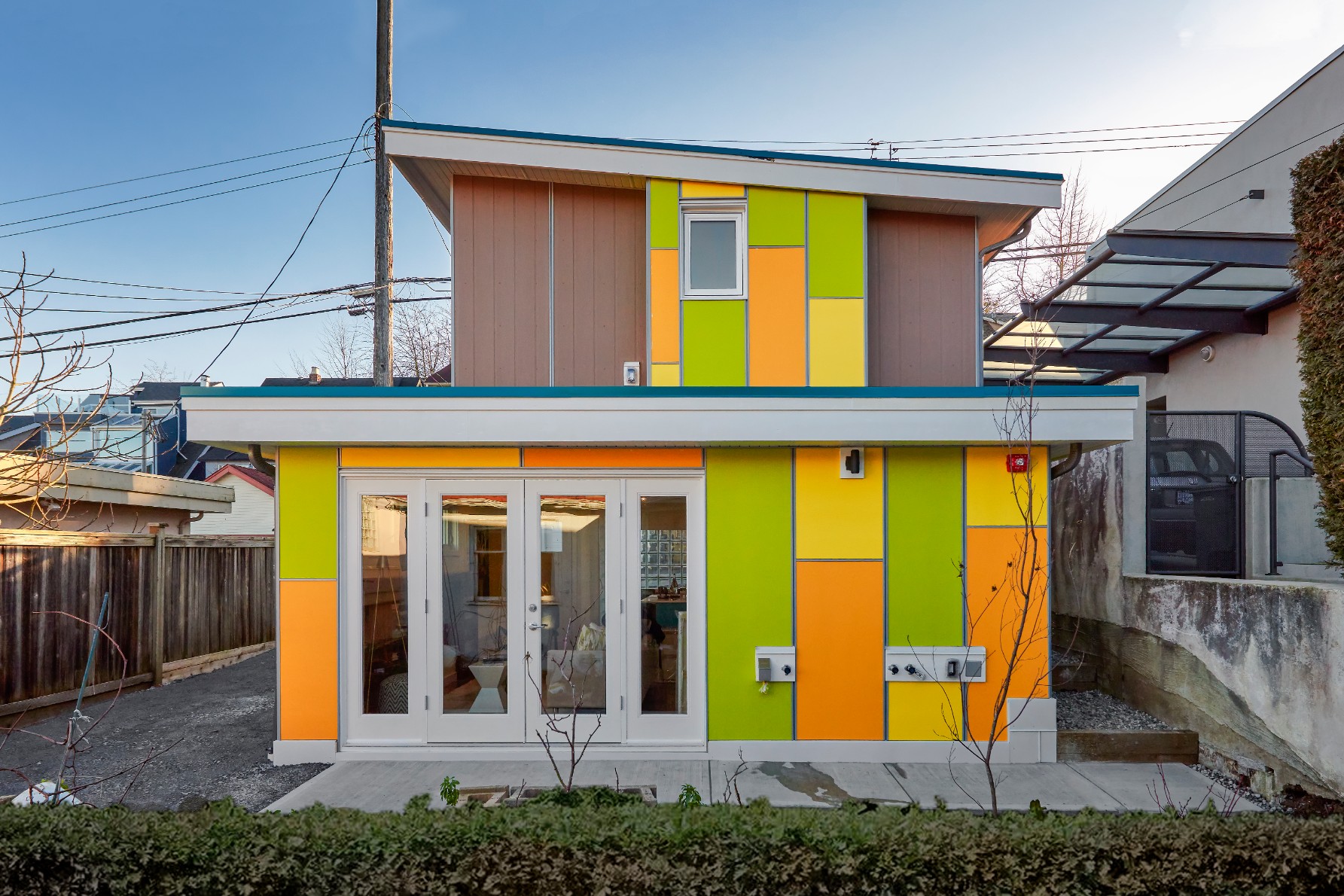 For many Vancouverites, especially the apartment dwellers among us, laneway houses represent the new dream home. Gone are the youthful fantasies of hilltop mansions with swimming pools, and in their place are the slightly more realistic visions of expertly crafted tiny homes tucked along lanes.

Since the city’s first contemporary laneway house was completed in 2010 by Lanefab (at McGill and Slocan), these unique builds have been popping up like architectural Easter eggs around our city. Here, we round up nine of Vancouver’s most eye-catching projects. 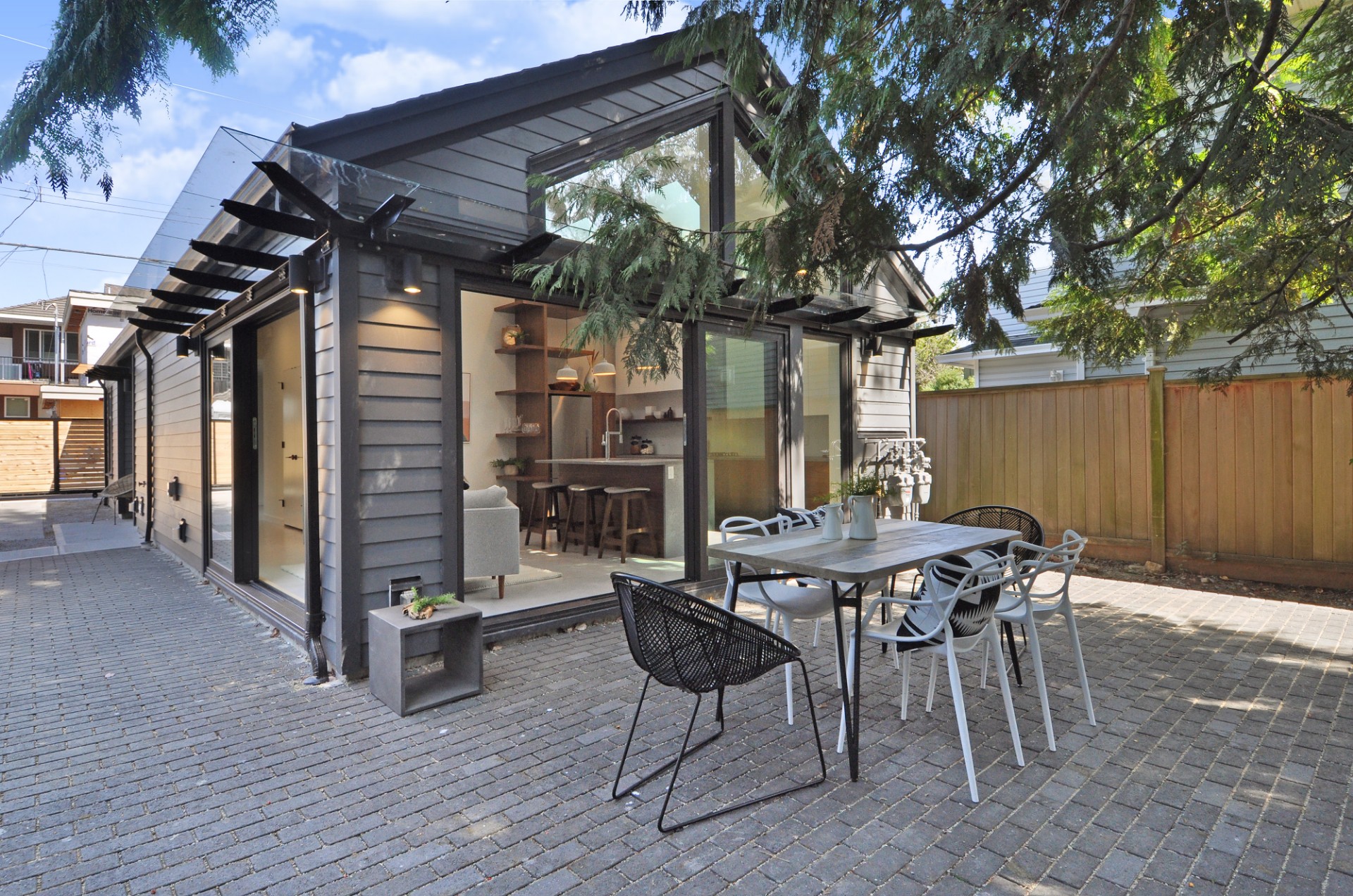 As the name suggests, most laneway homes are built behind a property’s main house, but this unique project was constructed beside it due to the bigger home’s placement in the middle of the lot. (It also happens to be one of the oldest houses in East Vancouver.)

Once the City of Vancouver approved this Smallworks design build—a process that tacked an extra year onto the project—the 860-square-foot home rose from the ground, complete with fine touches such as Caesarstone countertops and walnut millwork. 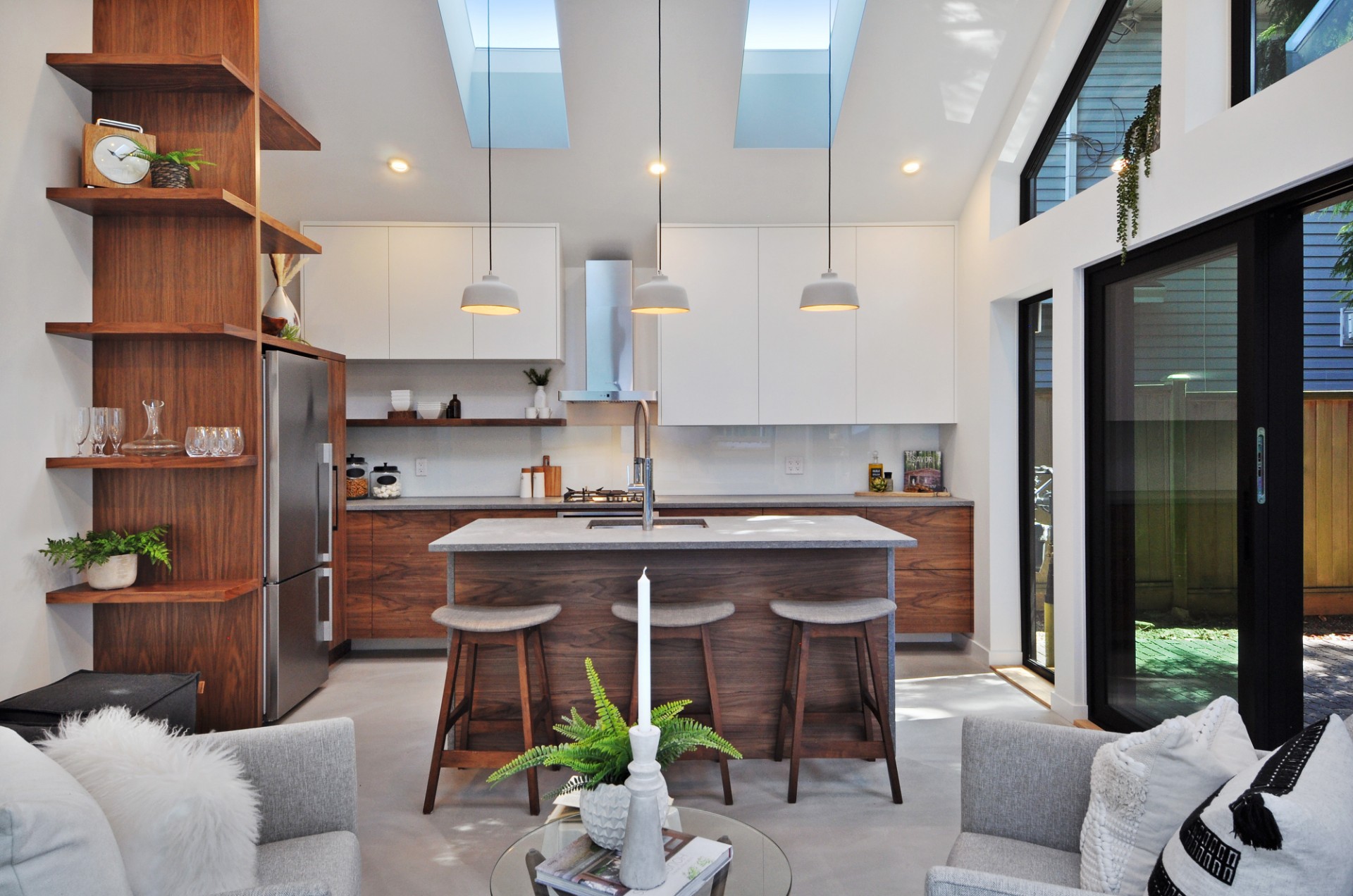 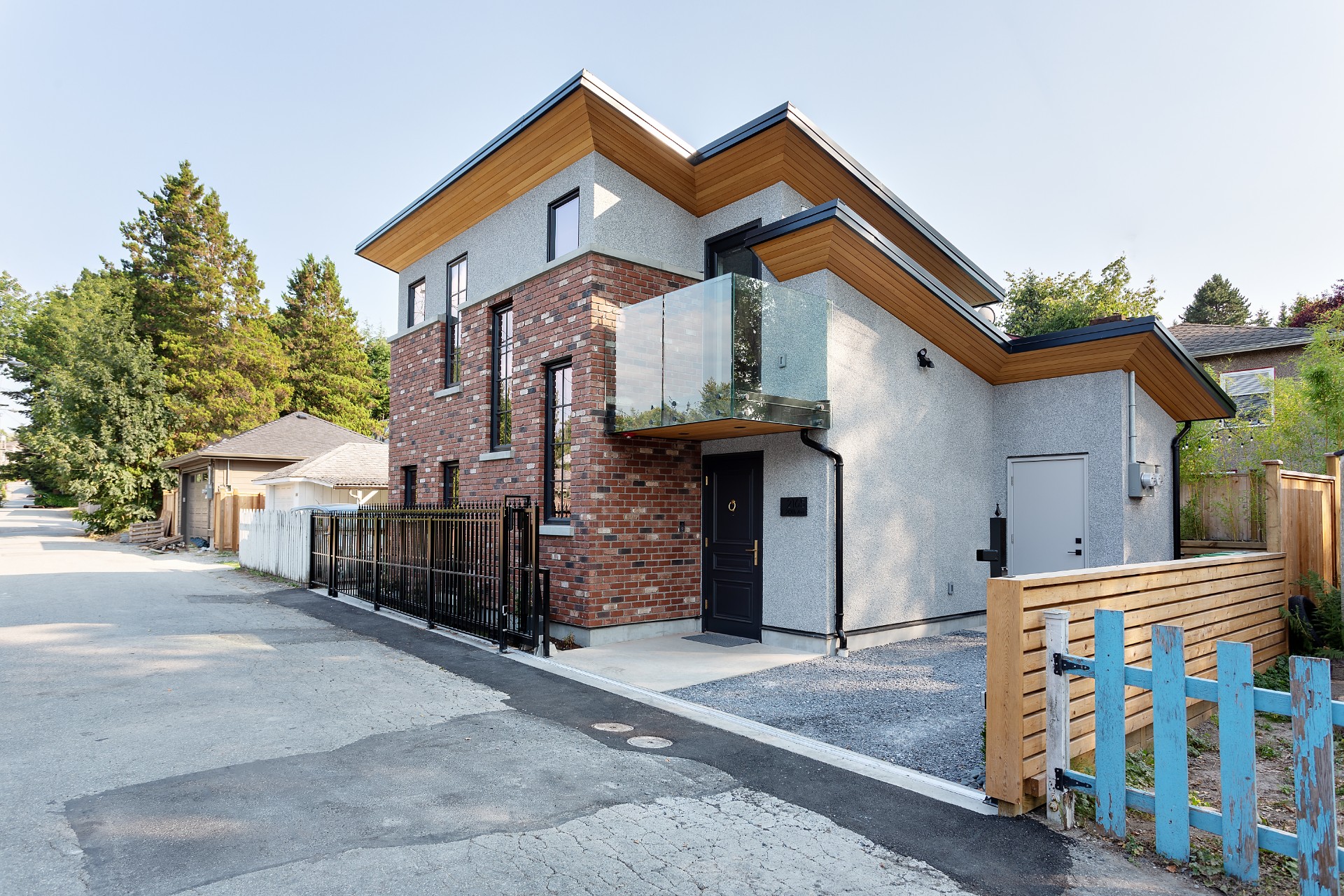 Along with a statement built-in wine rack, other striking elements include the matte black and natural walnut accents in the open-concept kitchen, the polished concrete floor, and the bathroom’s veneer slab accent wall beside the tub, which is complemented by satin bronze hardware and antique mirror inlay. 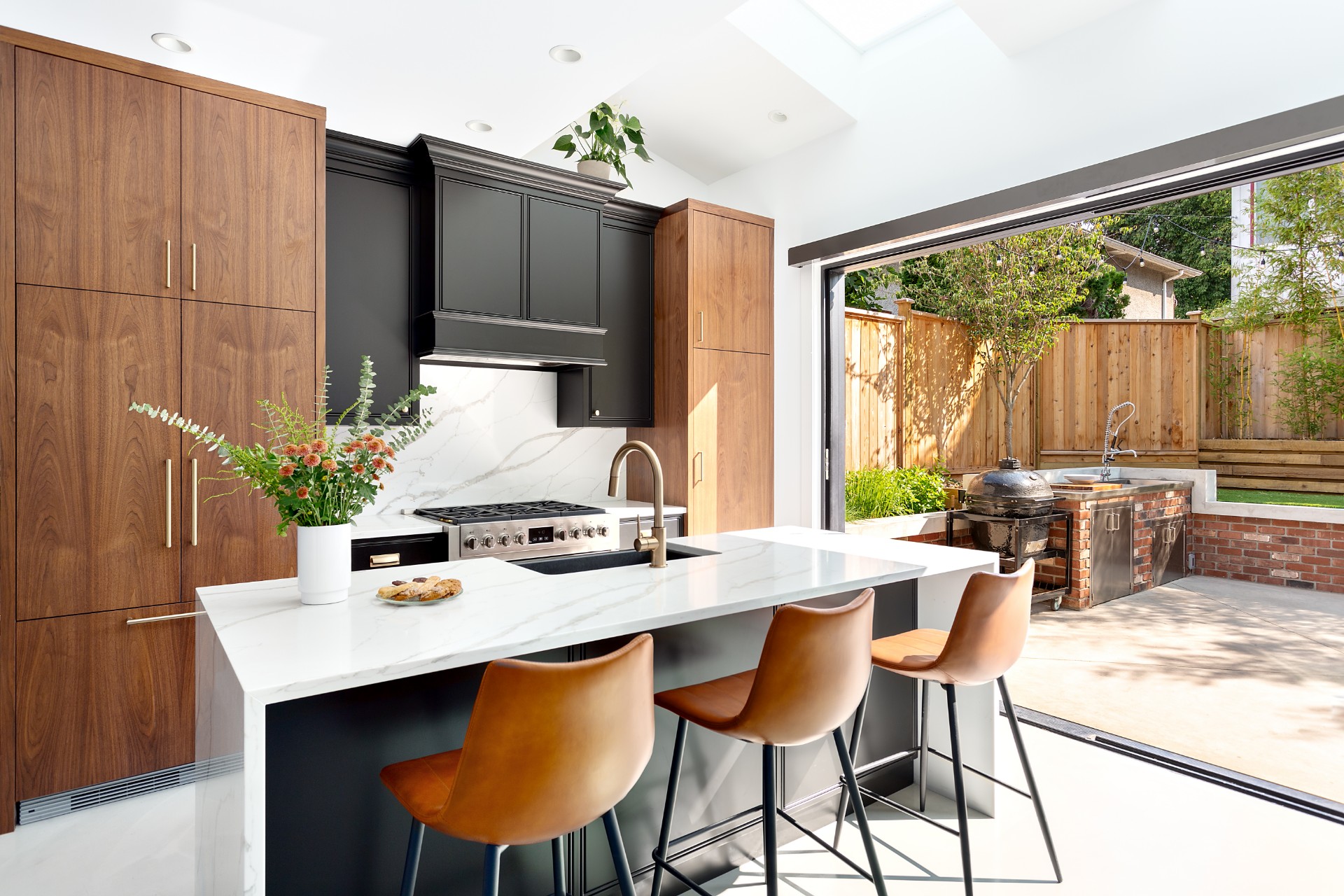 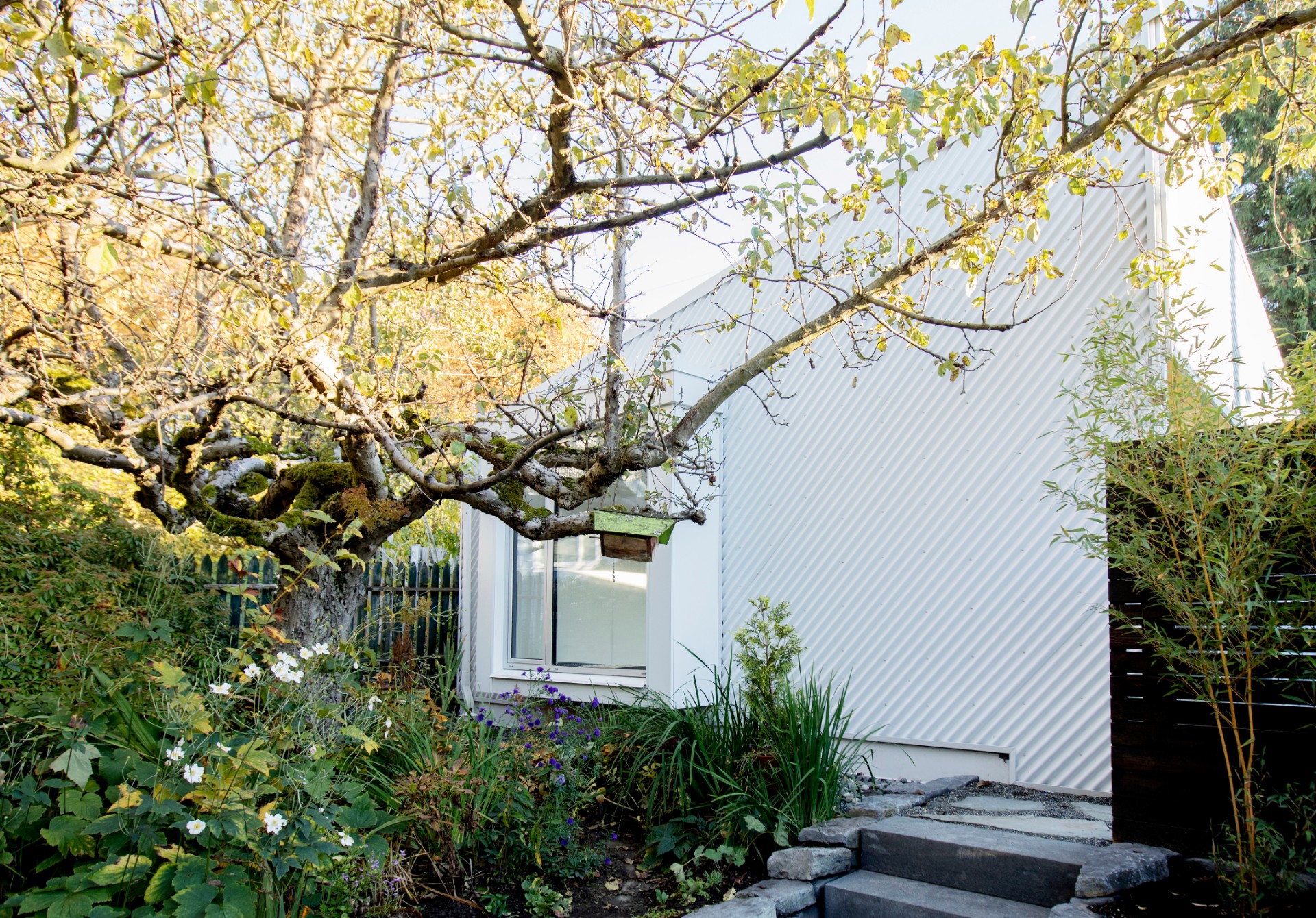 This laneway studio, dubbed Uplift, was inspired by the client’s work on the Feldenkrais Method, which is a body-oriented intervention designed to help people reconnect with their bodies and learn ways to move with greater efficiency. 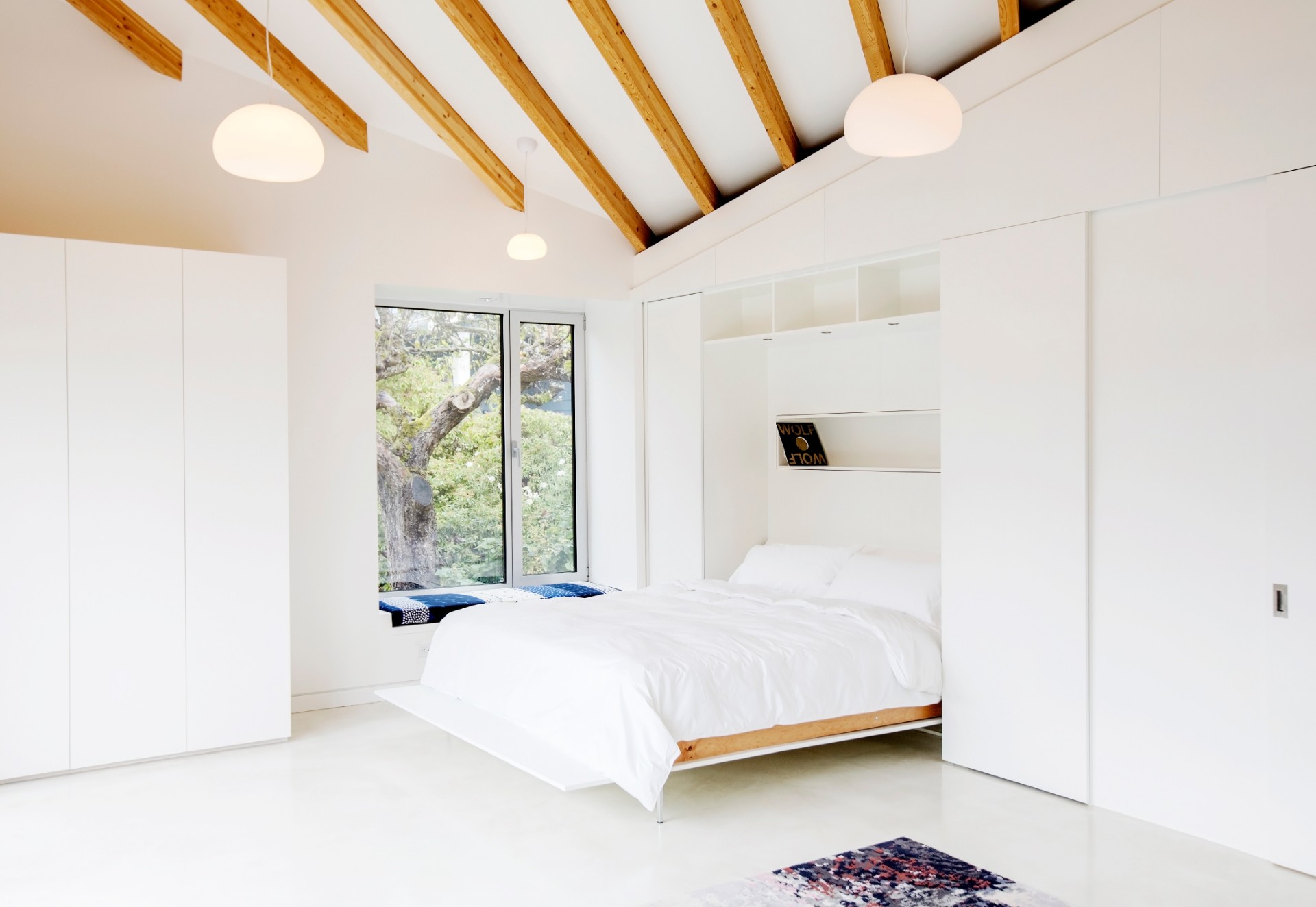 With that ergonomic goal of vitality in mind came this minimalistic space, designed by Marianne Amodio (of MA+HG Architects) and built by Smallworks founder Jake Fry (who also co-founded Small Housing BC).

Space-saving highlights include smart storage areas hidden behind panels, and a Murphy bed that can be stowed away. 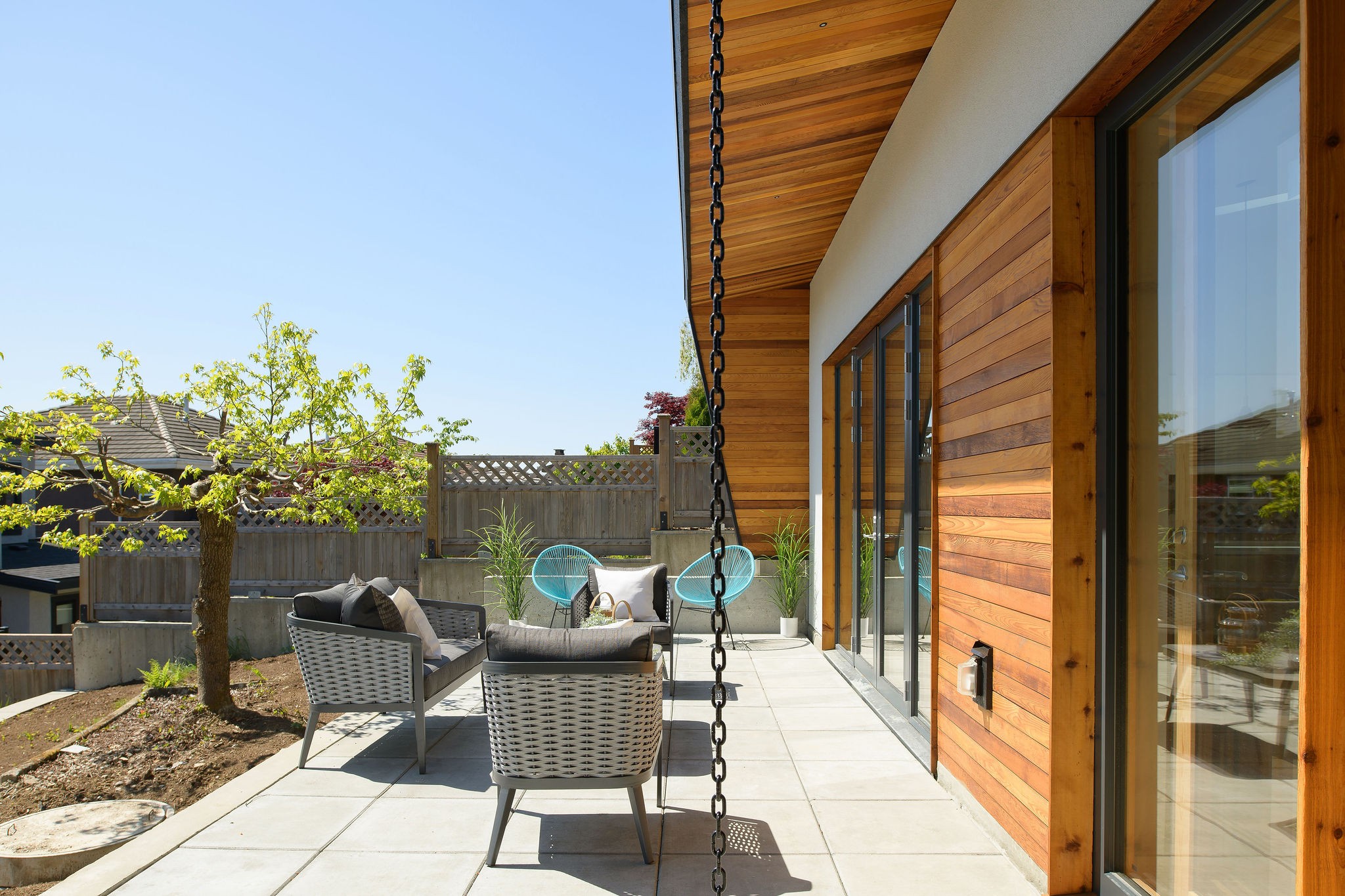 Frequent pops of colour in the tilework and furnishings add a whimsical touch to this little Lanefab laneway, which was designed so that the slope of the roof followed the slope of the land, allowing for vaulted ceilings to max out the space inside. 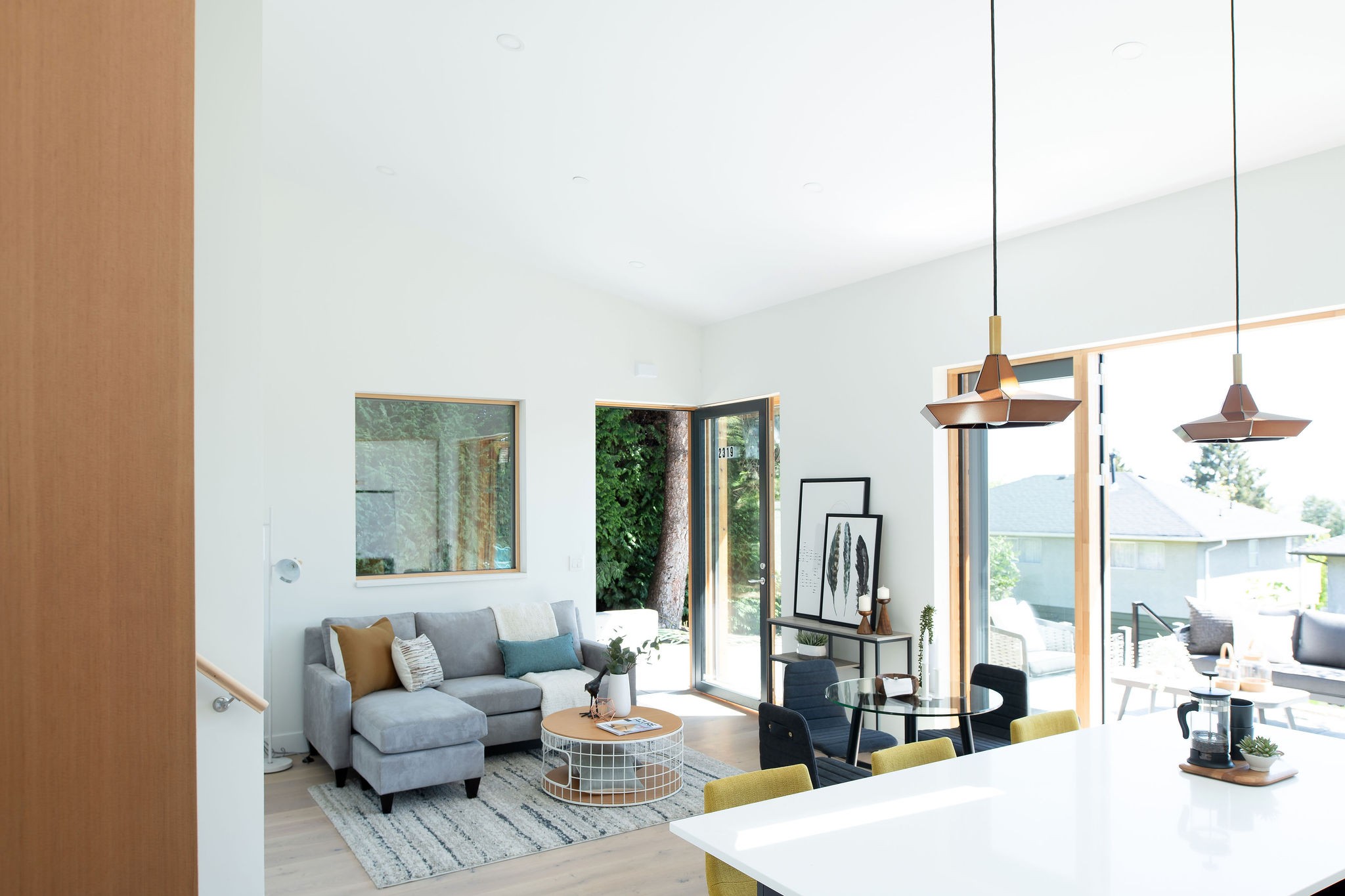 The tricky building code did not allow for windows on the side wall, so long skylights were installed instead, flooding the room with natural light.

The Aging in Place Lane Home 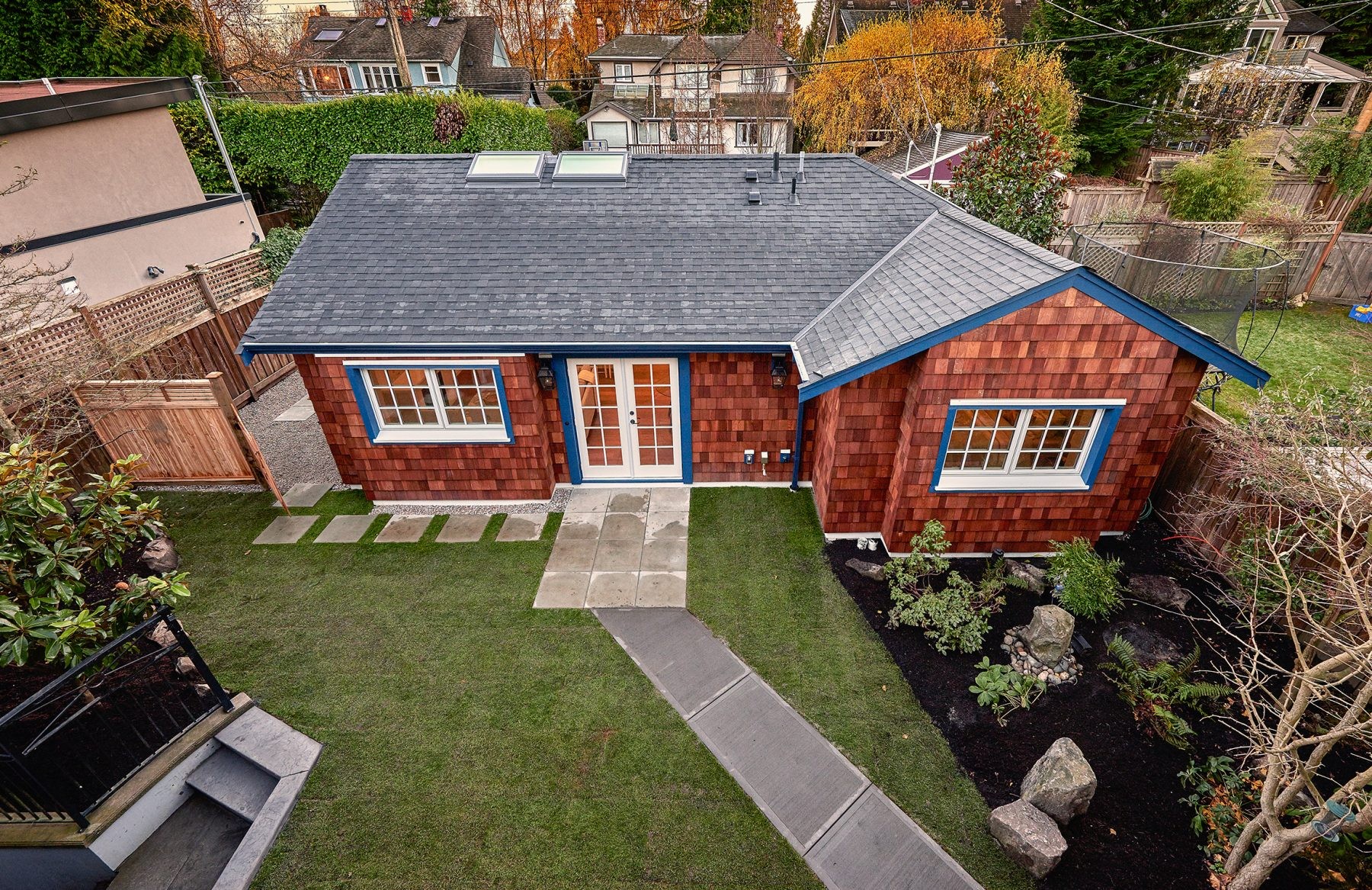 With its cobalt-blue trim and cedar-shingled exterior, this home evokes country-life simplicity in the heart of the big city. Smallworks’ team envisioned this one-level laneway with the concept of aging in place: the wide doorways allow for wheelchair access, the shower is curbless, and there are heated floors throughout. Ample skylights illuminate the entirety of the space, and large French doors open up to the main home for a sense of connection across the garden. 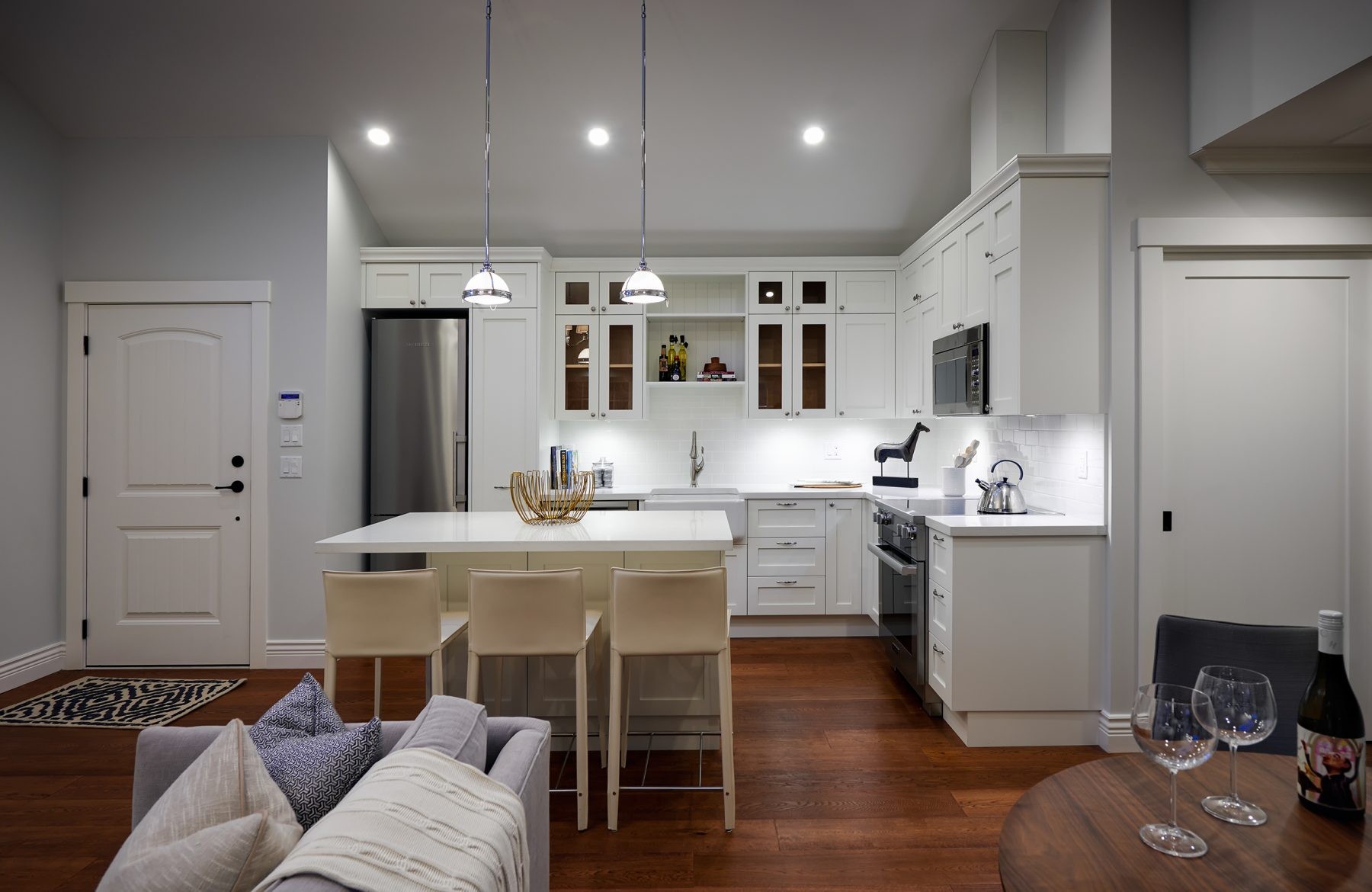 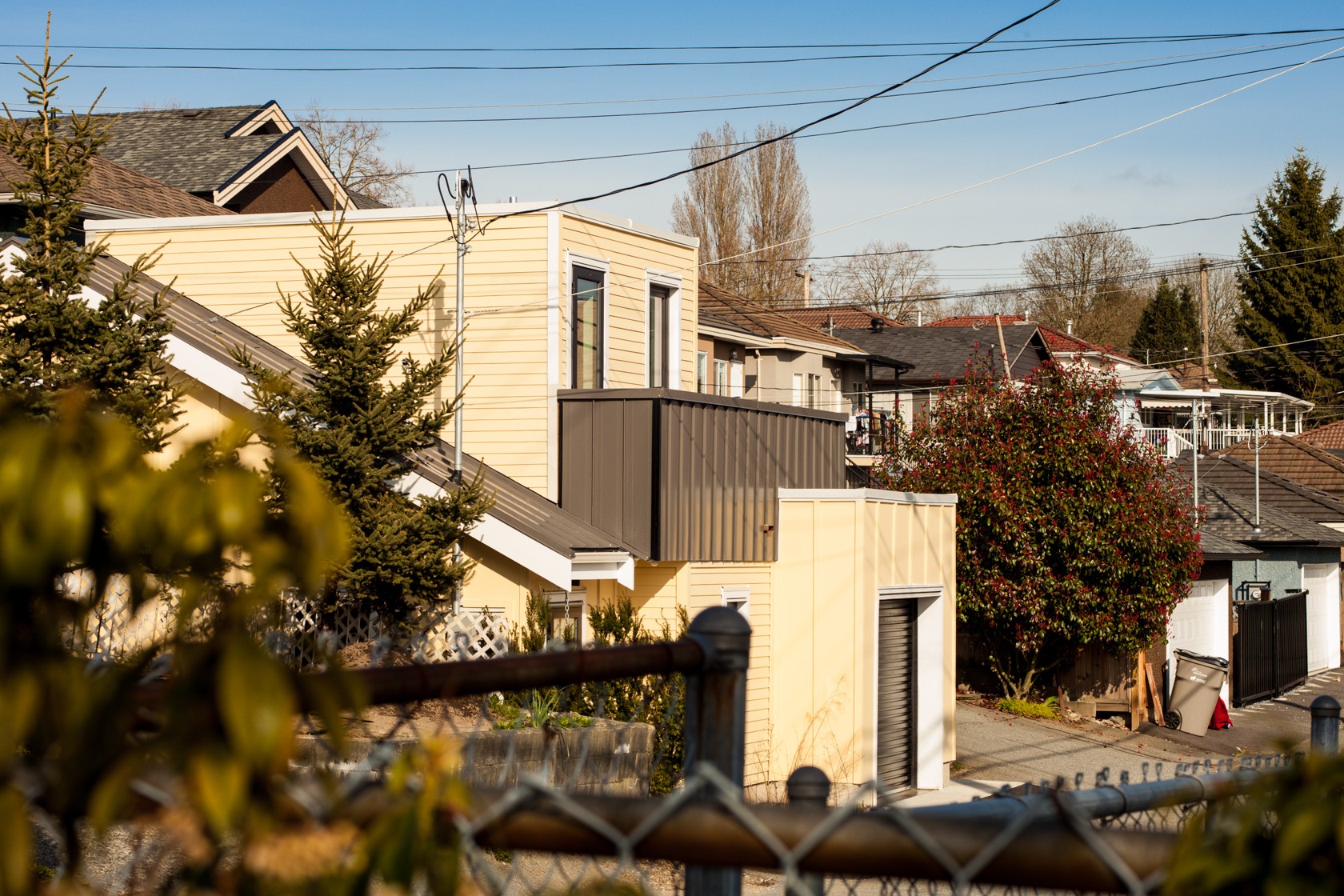 A living green roof and a 360-degree, floor-to-ceiling bookcase are highlights of this dreamy Grandview laneway residence by Novell Design Build. 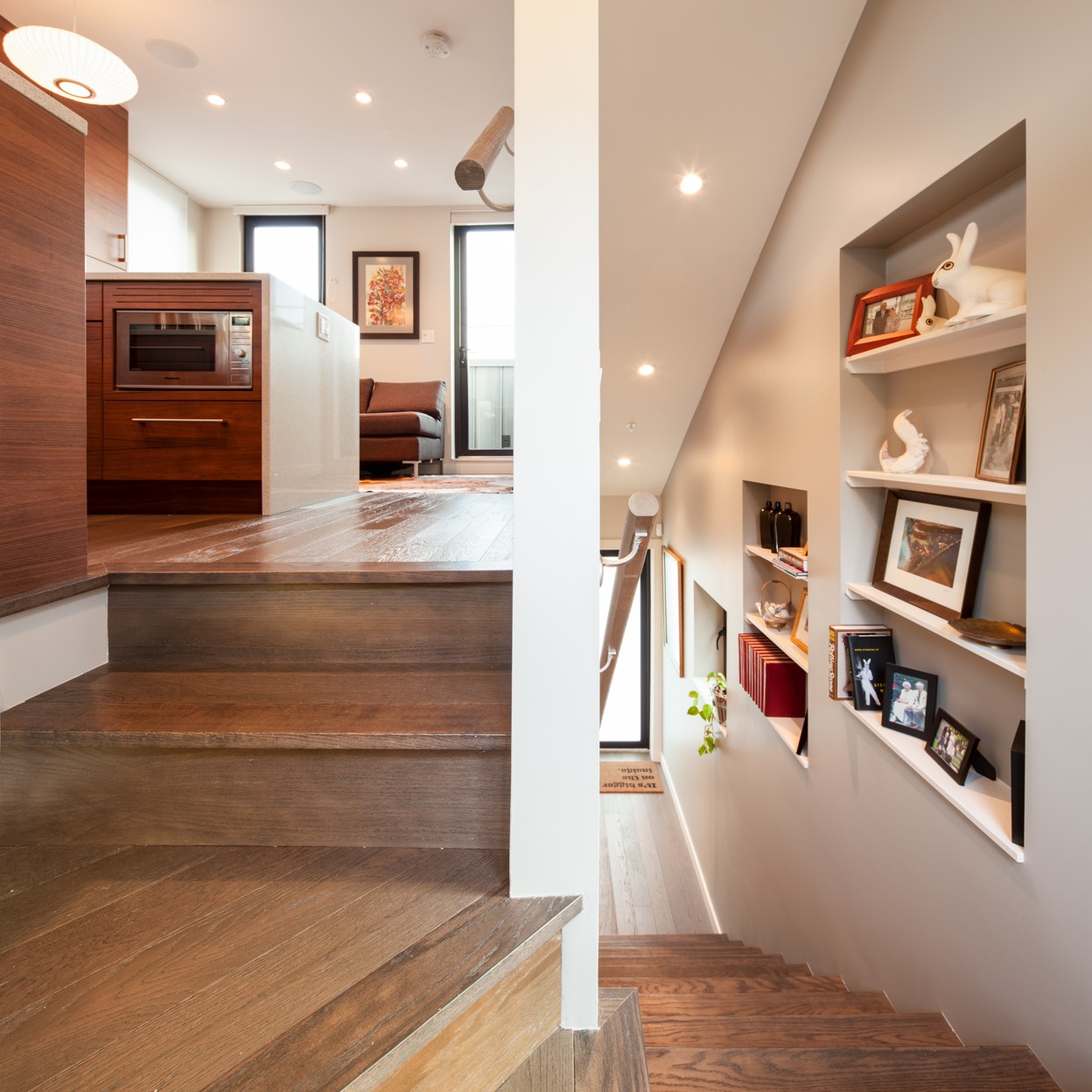 The company approaches work with a design build mentality, meaning that the design and build sides of the company work in conjunction rather than separately. With that approach, the firm inverted this laneway’s floor plan, tucking the kitchen—and a beautiful south-facing patio—upstairs for cooking and entertaining. Space is further maximized by installing hidden drawers and a suspended mechanical room (accessible via the deck), and the hallway can be converted into a walk-in closet and dressing room. 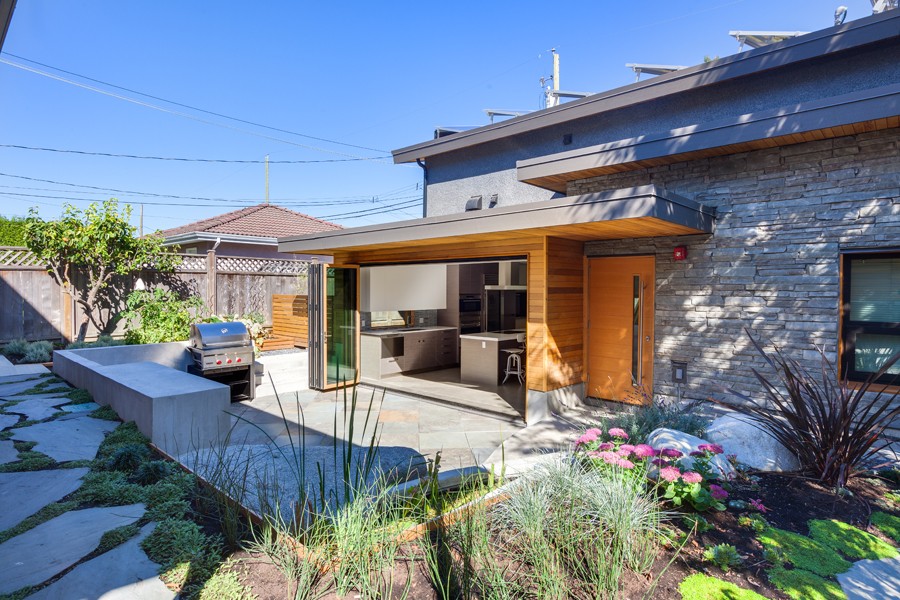 The sleek 1,050-square-foot design has a special focus on the kitchen, which opens up onto an expansive patio with an outdoor fireplace, pond, and a large boulder that was discovered during the excavation process. 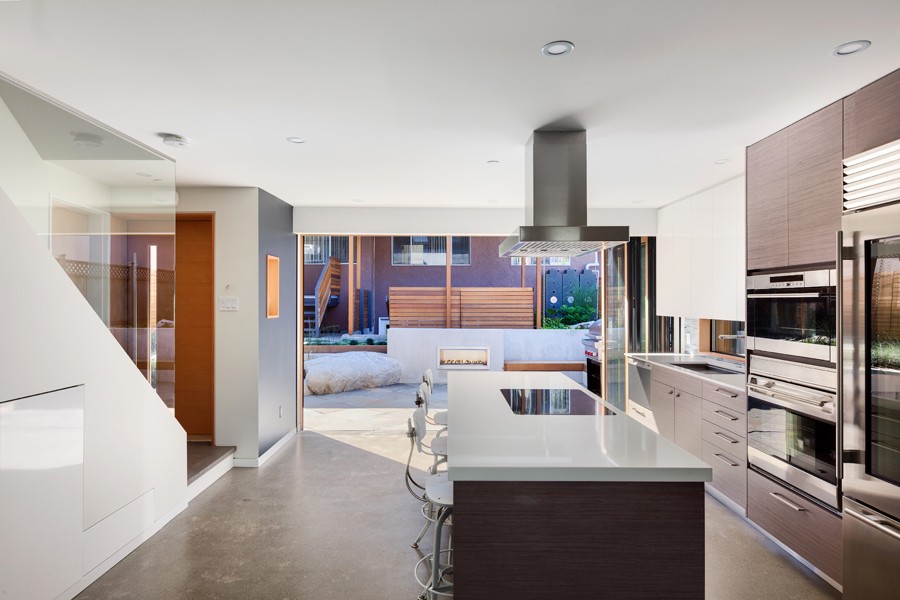 Lanefab’s design team is led by LEED-accredited designer Bryn Davidson, so laneway houses in Vancouver don’t get any more energy efficient than this. Like all the company’s projects, this custom build has super-insulated walls, triple-glazed windows, and a 100 per cent fresh air ventilation system with heat recovery.

A century after Piet Mondrian painted his iconic grid-like abstract paintings, Smallworks built a laneway house inspired by them. The bold motif extends from the outside in, where playful colour-blocking can be spotted in the bathroom tiles, kitchen cabinetry, and backsplash. 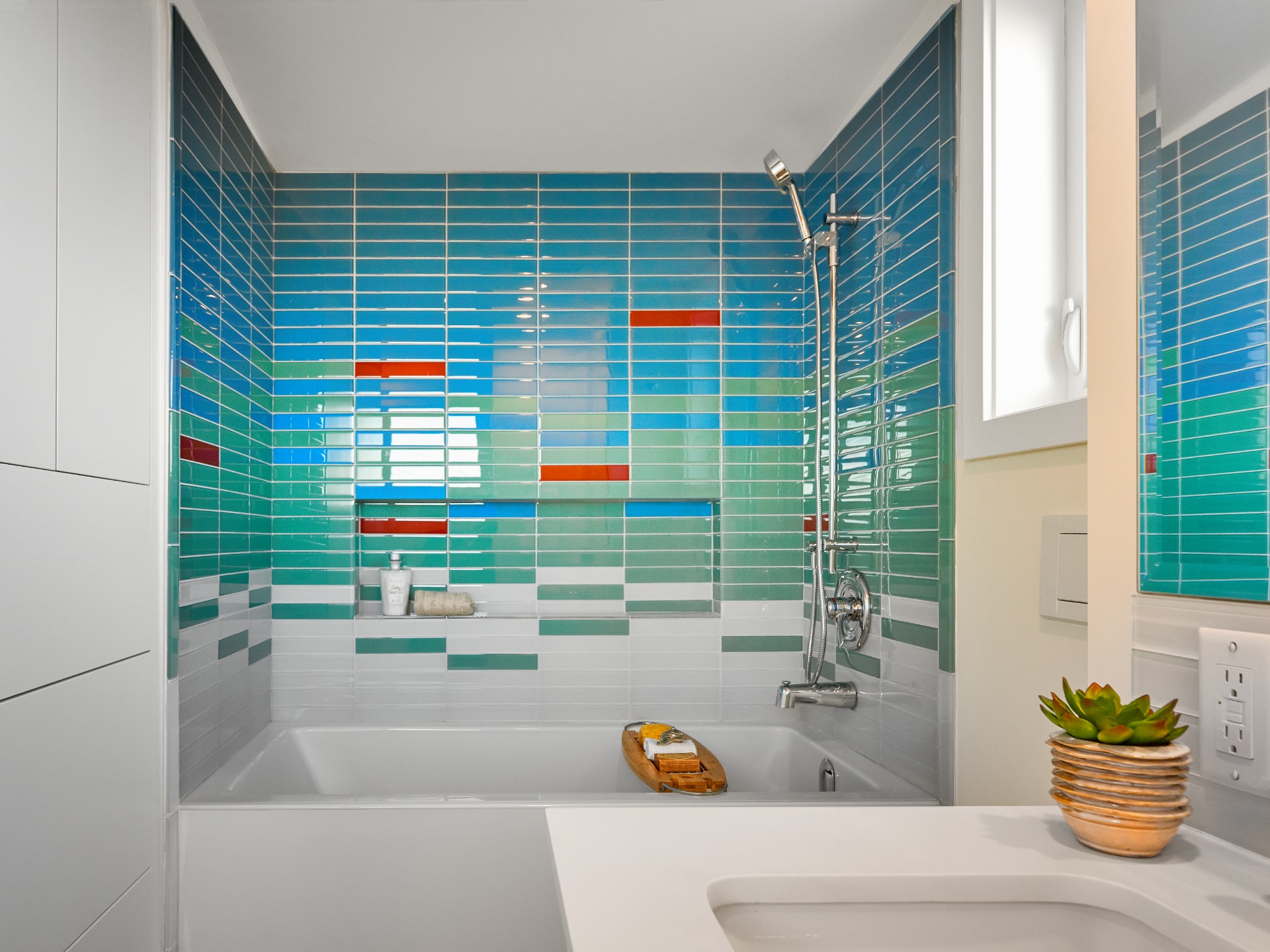 In a twist of resourceful repurposing, vintage elements such as the hearth and hardwood floors were lifted from the property’s main house—due to be renovated itself—and incorporated into this artsy 650-square-foot home. 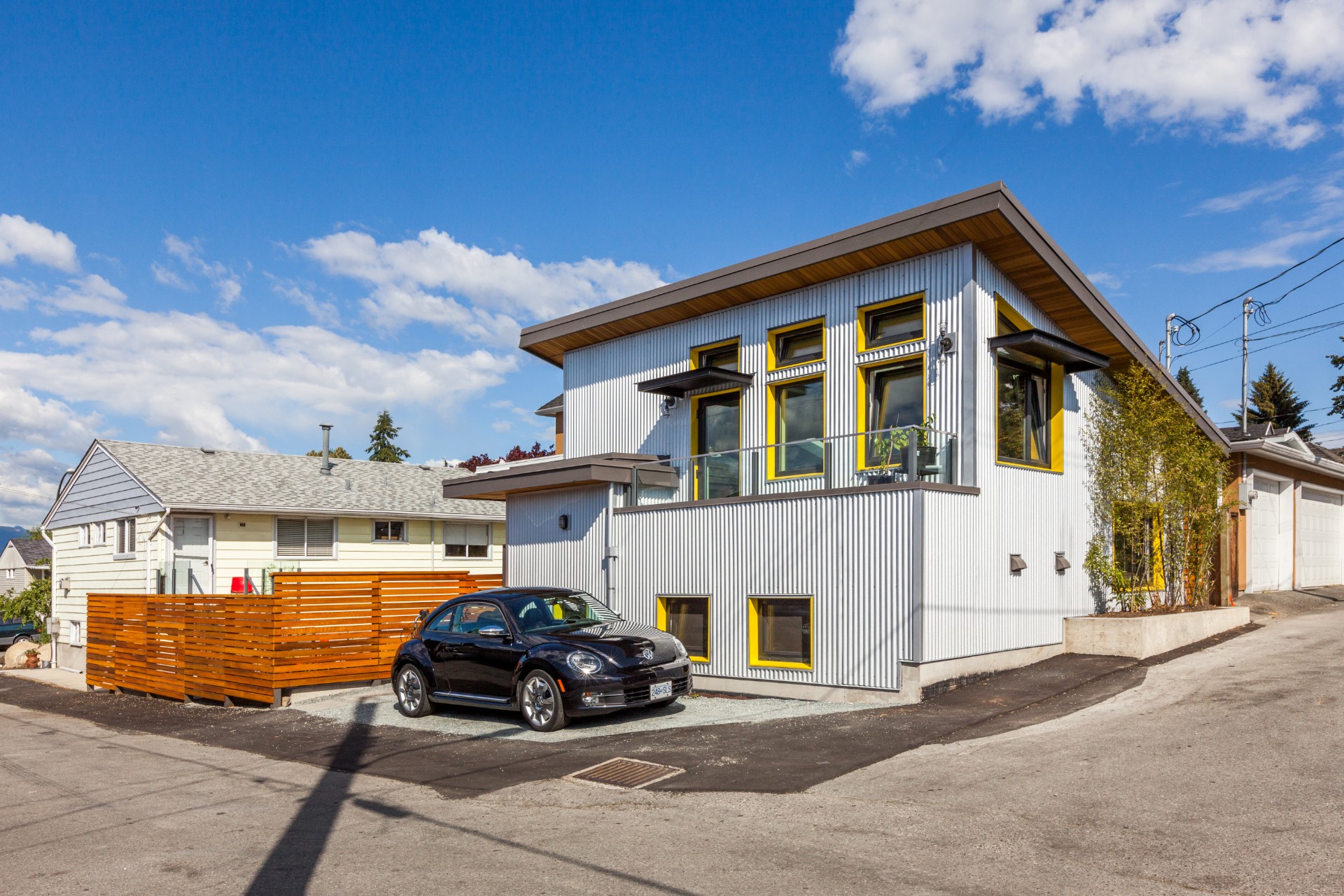 This Lanefab home/studio has a split-level design with a home office located in a bright loft above and a bedroom sunken into the ground below. The interiors reflect the design-savvy owner (a graphic designer), and standout custom elements include secret drawers that pull out of the crawl space, and a Lanefab-made live-edge cedar table/bar that can work as part of the kitchen or be pulled out for dinner parties. 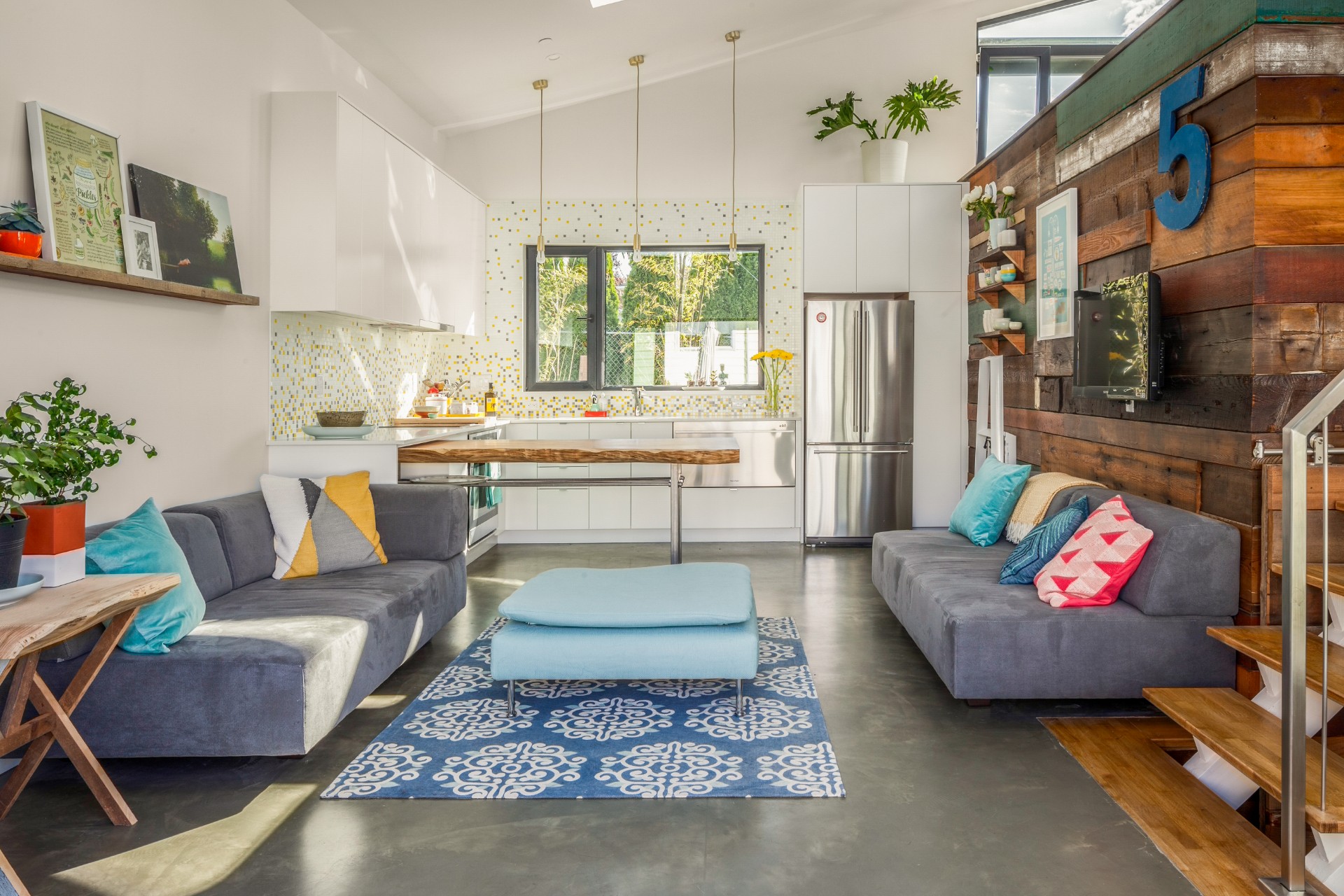 Outside, there is also a rain garden beside the patio, designed to collect rainwater.