Video games and comic book characters may seem to be an unlikely fit for Vancouver’s version of Rodeo Drive, but to fast-growing developer Kabam, being at the heart of Alberni Street just made sense.

Formed in 2006, the studio focuses on the massively multiplayer social games (MMSG) market; it is behind noted mobile platform titles including Marvel Contest of Champions and Transformers: Forged to Fight, while also partnering with global entertainment brands including Disney, Hasbro, and Universal in bringing to life some of their most successful franchises. Before being acquired by Korea’s Netmarble Corporation for a reported $800 million, it moved into its Alberni headquarters in 2016, where play and productivity come into impressive balance.

Evidently, Kabam does the typical nine-to-five a little differently. At reception, a ten-foot-tall Optimus Prime installation (assembled by a team of in-house software engineers) presides over a colourful waiting area. And beyond a bright orange hallway of character art, created by some of the company’s designers, lies 30,000-square feet of open-concept office spread across two floors. With just under 300 employees here (not including the company’s San Francisco and Austin locations) and new ones joining the fold often, Kabam realized the difficulty for staff to make new connections and friendships. As part of the company mandate, every six months workers are shuffled around to new desks to encourage socializing and interaction. As for those executives tucked away in private offices? Remarkably, such a concept doesn’t exist here. Senior staff members and even the CEO can be found in the trenches, working alongside the rest of the company. 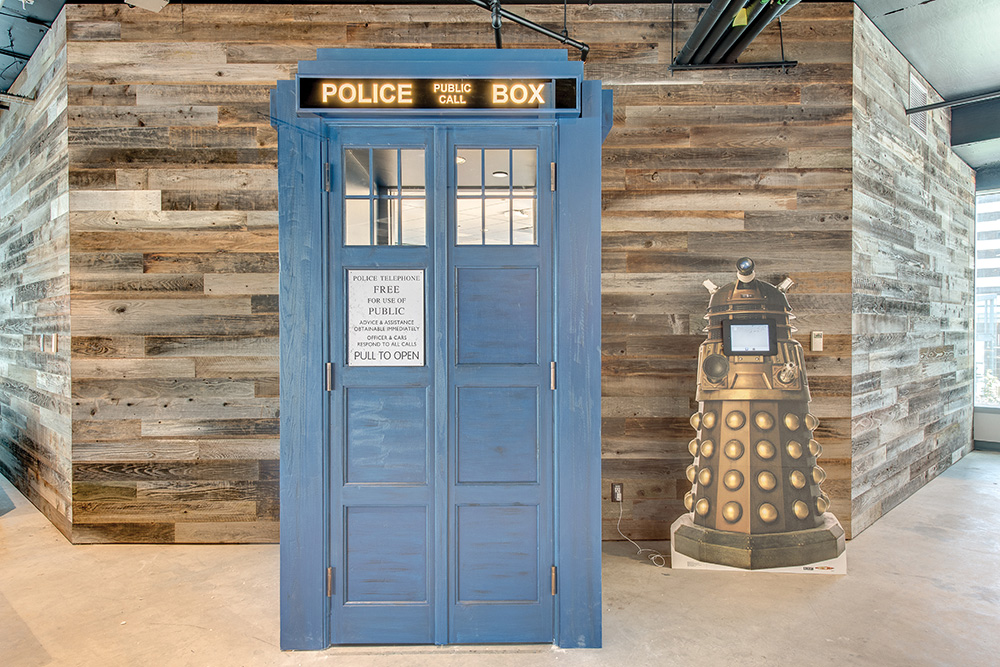 However, if privacy is required, employees have a few options at their disposal. For brainstorming sessions and group work, meetings can be arranged inside themed rooms ranging from an armoury (containing a medieval-inspired table and chairs) to Dr. Who’s time machine (fun fact: just like in the iconic television show, the blue police box lights up when the room is occupied). Aside from single-person workstations, sleeping pods are also available for play-testing and power naps. Comfort is a key factor behind the company’s core values, especially in situations where employees face looming deadlines with overtime, so Kabam makes it a priority to promote relaxation where it can. Dogs are a familiar sight throughout the week (there are 14 to date), and a music room outfitted with guitars provides another way for people to take a step back and reset their brains.

When it came to design, Kabam kept it local as possible. For its custom-built furniture, including a USB-charging dining table and Rubik’s Cube coffee bench, Madrona Bay Décor was called in. Based out of Salt Spring Island, the company is run by the parents of one of Kabam’s own employees. And to express its proud Vancouver home, a floor-to-ceiling mural by local graphic designer Chairman Ting was commissioned; a comic book map of the city with Godzilla and other movie references thrown in, it’s also featured at Kabam’s secondary office on West Georgia. While the overall concept there differs slightly, with meeting rooms named after places in Vancouver and cities found in the Marvel universe, Kabam’s values of comfort and comradery remain present.

Yet, even with the addition of two floors at its West Georgia location, the studio is ready to make a move—and already has its sights on a new home inside the upcoming Vancouver Centre II tower on Seymour Street. With the goal of consolidating the two offices under one roof, Kabam has leased almost 30 per cent of the 33-storey building, which is expected to be completed in 2021. Although it means an eventual departure from luxurious Alberni Street, it’s also the mark of more exciting things to come for Vancouver’s gaming industry.

Read through our Office Space series.