In this story from our archives, we caught up with Matteo Cibic in Vancouver for the 2017 Interior Design Show to talk about donkeys, design, and the boundaries of joy.

At age six, Matteo Cibic was introduced to the comprehensive work of Vincent van Gogh. But when he discovered that the influential Dutch painter had taken a razor and cut off a portion of his left ear during a time of madness, he vowed never to become an artist.

Besides, by the age of 14, Cibic had a new plan: he wanted to be the Pope.

“Yes, the Pope,” he confirms after I give him a questioning look.

Also at age 14, Cibic wanted to be Michael Jordan. “I was very ambitious,” he says.

When he was 15, after his parents started to become “scared” of his career ambitions, they sent him to Milan for the summer to spend time with his uncle, Aldo Cibic, founder of the Memphis Group: a cultural phenomenon that revolutionized the design scene in Milan. While at his uncle’s office, Cibic decided to crash a massive party thrown by the biggest modelling agency in the city.

“At that point,” he recalls, “I thought it was much better to become a designer than the Pope.”

You could say that was the moment memories of van Gogh’s ear faded away and Cibic’s career began.

It’s a story I can’t help laughing about as I sit with the Italian designer on a vibrant blue couch in Gastown’s Secret Location. Cibic finds himself in town as part of IDS Vancouver 2017; on this particular evening, he is mere moments away from giving a presentation on his body of work, which revolves around zoomorphic and anthropomorphic shapes. His singular approach to creating objects with hybrid functions is what won him an Elle Decor International Design Award in the young talent category. The 33-year-old often takes on experimental projects with hidden surprises that have the ability to push boundaries and make onlookers question what they are gazing upon. With a magic touch, Cibic fuses the world of extravagance with eclectic design. 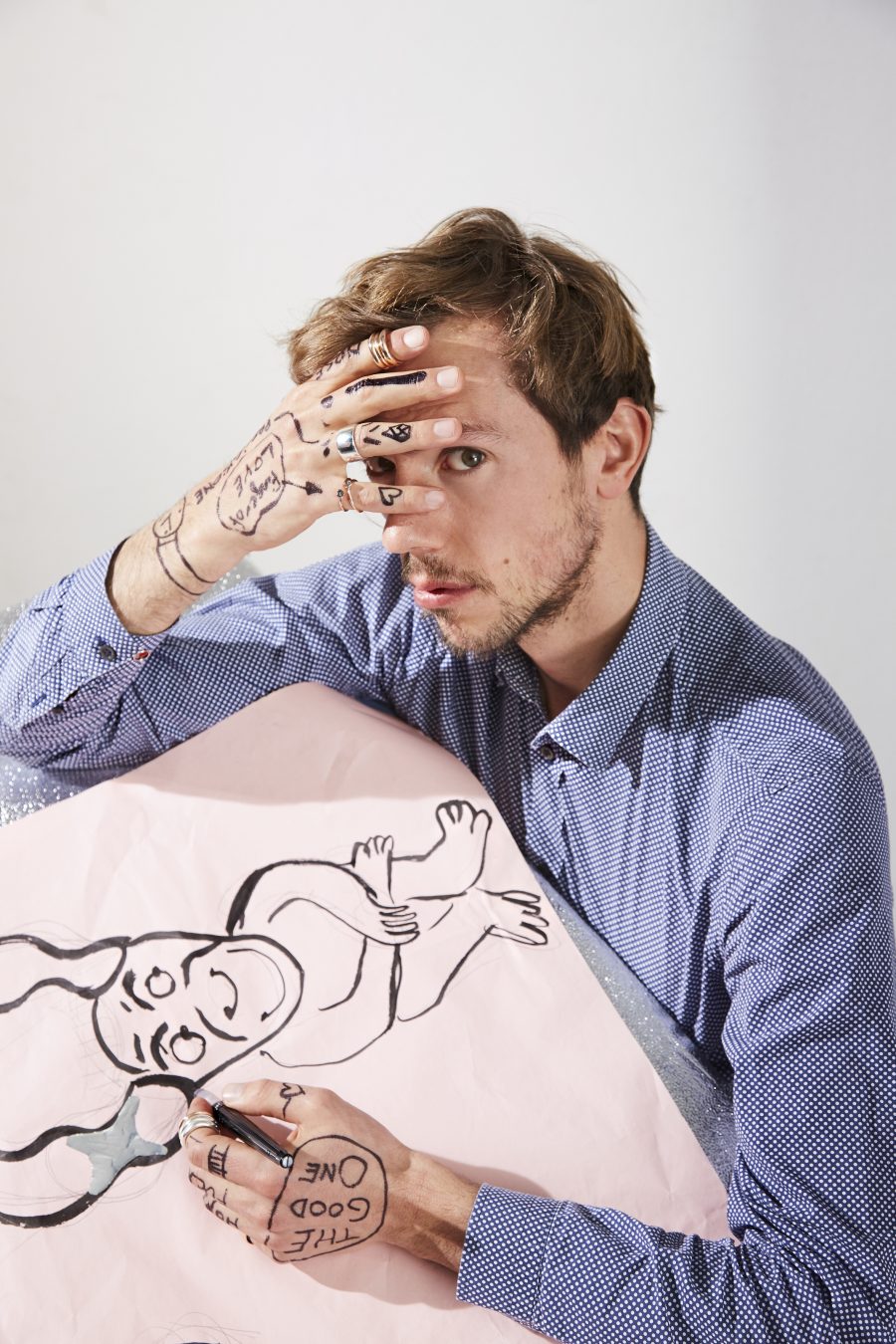 As I am about to ask him a question regarding Il Paradiso dei Sogni, a dreamlike collection of ceramic animal characters that sits beautifully on display at Secret Location, a woman walks up to Cibic. He greets her with a warm hello.

“The donkey is home now!” she says enthusiastically.

“It’s you!” Cibic says with delight. I find out that this woman is now the proud owner of the collection’s white donkey. “His twin is over there!” I glance over and see a black donkey sitting picture perfect as guests take photos.

“Do you feed him?” Cibic asks white donkey’s new owner.

“I feed him, I take him for walks,” the woman says. Laughter follows.

I am blown away by Cibic’s quick wit, charm, and zest for life—the same traits that are embedded within the Il Paradiso dei Sogni collection. His special handmade animals, plated in 24-karat gold, each have a distinct sense of quirky personality.

The idea of seeing something as a character, or a persona, is a common thread in Cibic’s work. Take VasoNaso, a collection of vases that translates from Italian into Big Nose. “Every year, I do an experimental project. It starts very simple. I always ask myself a basic question,” Cibic explains. “I’m really into people who can just do one thing at one time. A still life painter usually does it for an entire life. So I wondered: how can they just keep doing it for such a long time?” In order to understand, Cibic began producing vases, each with their own characteristics and noses. Each night for a year, when the clock struck midnight, a new vase was published on Cibic’s website, where one lucky costumer could purchase it.

During his presentation at Secret Location, Cibic discusses his collaboration with Scarlet Splendour, known as the first Indian luxury brand in the world. “It’s kind of an international, ethnic, luxury product,” he says. “It really embodies many cultures in many times.” Then, to the amusement of the room, he talks about the fashion brand he once started, called AAAAAAAAAA. “We were just doing suspender trousers,” he explains. “Trousers with suspenders. We had a lot of success, but no one knew how to spell it because there were too many letters.” Eventually, the company became 10A and Cibic stepped away from it to focus on other types of design. “I went back to my donkeys,” he chuckles.

Unlike van Gogh, a tortured artist whose career is often associated with despair, Cibic is playful and exploding with optimism, always exploring the new. When I ask if he could describe his style of work in one word, he says, “Experimental, luxury, fun.” Of course, fun is the key term here. And I must admit, I’m glad the whole Pope thing didn’t work out for him.

This article from our archives was originally published on October 25, 2017. Read more from Design.