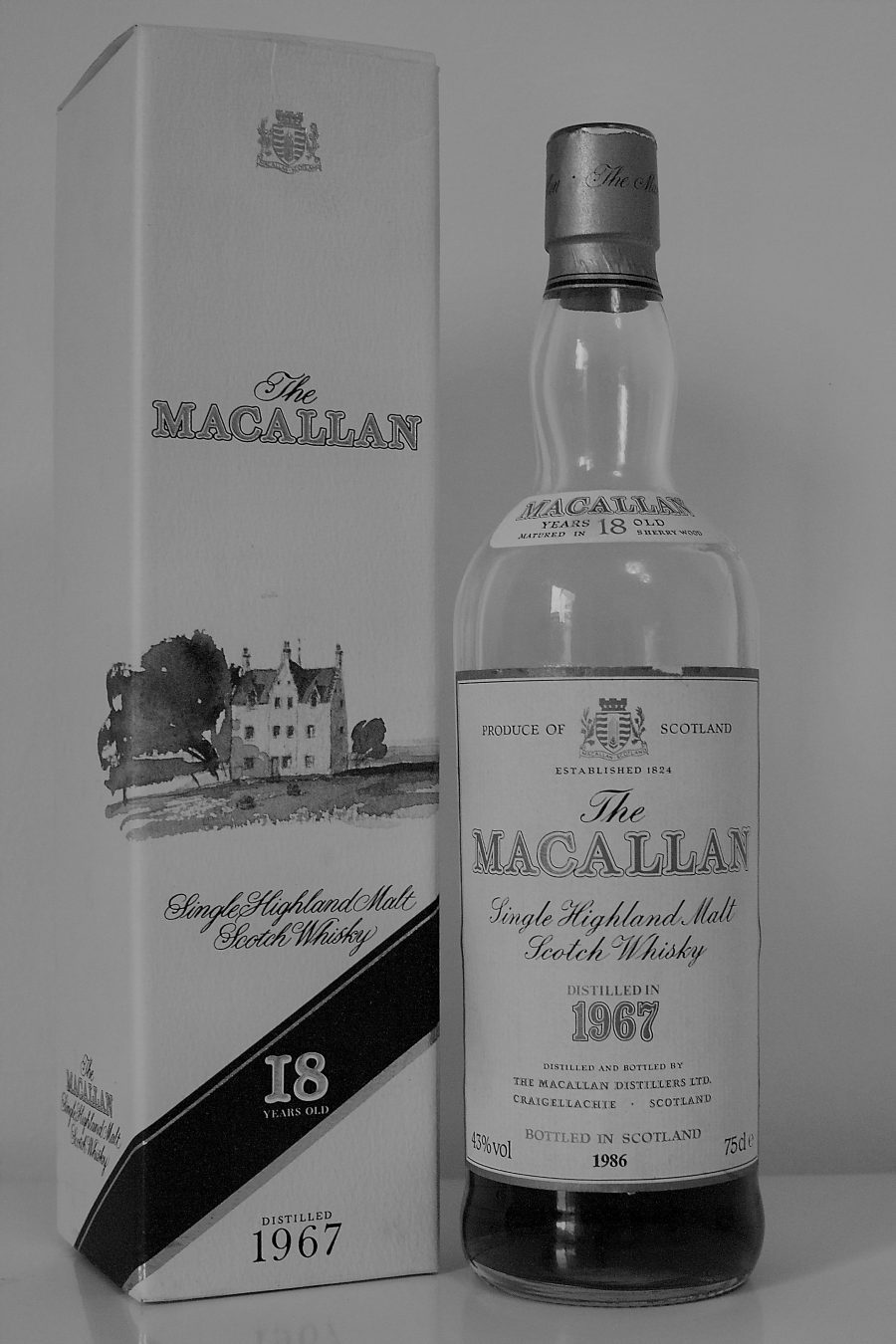 Whenever the retired Dr. Mclellan travelled from Glasgow to visit his family in Vancouver, he smuggled bottles of Scotch in his luggage. He enjoyed a “wee dram” in the evening.

Since he’d amassed a stockpile over the course of his career (mostly gifts from patients), and the average price of single malt in Canada seemed outrageous, he preferred to dig into the stash when required. On this particular trip, he was preceded by his wife (the mother of my partner) by a couple of weeks, and she’d been elected to transport the goods. We wasted no time in cracking a 10-year-old Laphroaig, as we prefer a smoky tipple around these parts, but decided to shelve the 18-year-old Macallan until the old man landed at YVR.

And so, this bottle languished in a dim kitchen cupboard until Dr. Mclellan’s arrival, when it was then suggested that we have a taste in celebration. Though my partner worked carefully to extract the cork, it disintegrated under pressure, dropping fragments into the bottle. But no matter, as the important thing was to get on with drinking it. We were, all of us, struck by the mellow, sherry cask-infused flavour and the complex, lingering nose. Dr. Mclellan proclaimed it rather good. Another round? Of course.

The next day I showed the bottle of The Macallan to my father, an inveterate antique hunter and lover of old stuff. Though his poison of choice is a six-pack of Kokanee, he had a sniff of the whisky and noted that it was distilled in 1967. He immediately showed me a Craigslist advertisement for a much newer bottle priced at close to $1,000. Feeling queasy, I investigated the going rate for our little friend and then immediately called my partner at work.

He should have known better, he kept repeating. A Glaswegian born and raised, he once spent a few days cycling around the seven distilleries of Islay for a high school history project. He figured, in the back of his mind, that the bottle was valuable, but more in the region of $500, not $5,000. That seemed beyond ridiculous. Even more ridiculous, and painful, was the feeling that less than 24 hours ago we’d busted the cork of an appreciating asset, rendering it valueless, unless we sold it by $300 measures. We thought we were smarter than this, sophisticated enough to recognize such a windfall if it ever came our way. We’d just watched the Netflix documentary Sour Grapes. We owned and had perused a book called Scotland and its Whiskies. We even knew that The Macallans were the most collectible bottles.

Dr. Mclellan wasn’t nearly as bothered about it as his son was. He couldn’t recall the provenance of the bottle, though he did guess that it was a particular type of gift—not the kind purchased for your good doctor at Christmas, but the sort given by a bereaved wife unaware of the value of her dead husband’s collection, maybe wanting to be rid of it all, more of a “thanks for trying” thing. We asked, hopefully, if he had similar bottles gathering dust back home. “Not bloody likely.”

We asked Dr. Mclellan’s brother, an accountant, the same question. Also negative. My partner and I despondently considered the many thousands of dollars of warm, amber liquids that had flowed through the happy gullets of these two unsuspecting Scottish professionals through the years, mused on the untold fortunes languishing in the cabinets of their colleagues, and joked bitterly about how such bottles attain value—because noobs like us keep opening them.

After all of that, sampling it again seemed an extravagance and it lived, mostly full, on top of the fridge unless we offered a measure to curious friends. My partner claimed that knowing the contents of the glass cost hundreds of dollars did not influence or improve the flavour, and actually caused him to enjoy it less because he couldn’t take a sip without cursing the influence of extreme capitalism on the most cherished export from his homeland. He wished his father had drained it back home and that we never knew it existed. He considered what that unopened bottle could have paid for: maybe a nice vacation for his parents, or possibly a portion of our children’s education, if we’d held onto it for another 20 years. “Bah,” his mother said, “it’s all for drinking, isn’t it?”

Among the curious was my brother, usually seen with a can of Budweiser when he drank at all. Given a nip of the “water of life,” bottled in 1986—when he was attending kindergarten—he knocked it back in one go, like a bar shot topped with whipped cream, and, noticing our stunned expressions, said, “What? You only gave me a little bit.”