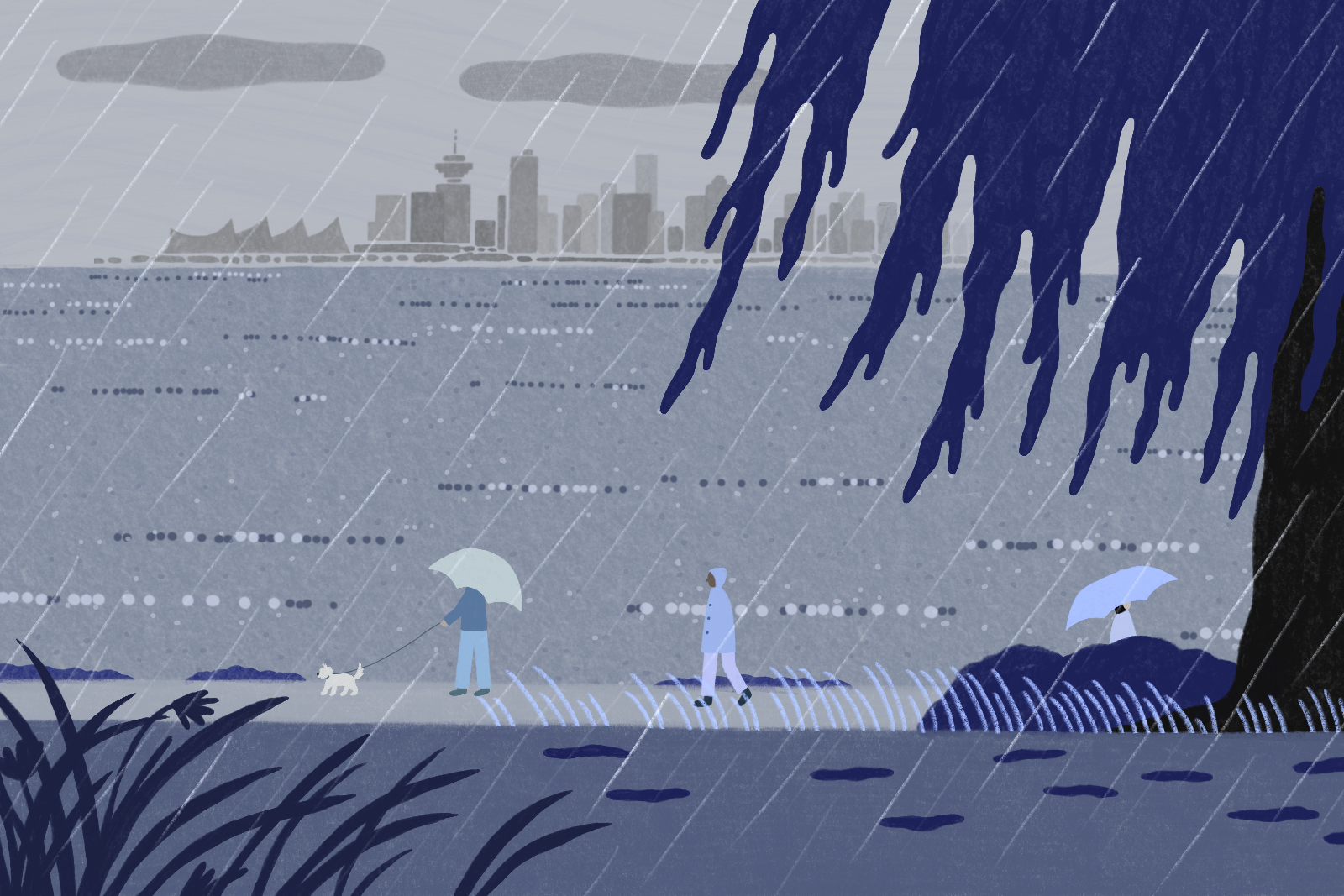 Noonday Dark is Vancouver author and comedian Charles Demers’ second book of his Doctor Annick Boudreau Mystery Series, out this month from Douglas & McIntyre. As his book hits the shelves, we asked Demers to reflect on what he’s learned about Vancouver—the backdrop for a novel that delves with trademark humour into the ever-changing city. His chosen topic? The weather.

When the late master American crime novelist Elmore Leonard compiled his now-famous 10 Rules of Writing, his very first injunction was, “Never open a book with weather.” His reasoning was anthropocentric: “If it’s only to create atmosphere, and not a character’s reaction to the weather, you don’t want to go on too long. The reader is apt to leaf ahead looking for people.” My new mystery novel, Noonday Dark, opens with a comedy writer and clinical depressive cracking wise about the Vancouver rain outside of her doctor’s window; I think I’m on the right side of Leonard’s weather law. Terminal City’s rainy season isn’t so much a literary symbol for depression as it is a root cause.

I speak from a certain amount of experience. I know everyone was supposed to buy flattering ring lights to help put on a brave face over Zoom these past years, but all through the pandemic I just used my seasonal depression light therapy lamp. Creating an unnatural sheen of brightness in the room and across my face, the SAD lamp could do double duty, offering both psychological and cosmetic enhancement. I may have been muted, but not these beautiful green peepers of mine!

I got the lamp a few years ago, which seems odd—although I’ve only had a good pair of boots for about five years, and that’s crazy too. Vancouver is a city that encourages a level of denial about its weather, and what it takes to get by here, which seems outright pathological. In the same way that our median house prices bear no mathematical or physical or even conceptual relation to our median income, our rates of official civic cheerfulness and beach-blanket body-building are entirely out of whack with our general cloud-cover and annual rate of precipitation.

That’s the official Vancouver—the smiling Vancouver with the world’s prettiest airport; the city that pretended it snows here in the winter so that we could host the Olympics. The city’s real, flesh-and-blood inhabitants hunch into the cold wet darkness that looms over us every year for six months and change with the same weary resignation as Winnipeggers three provinces over lean into the windchill. Hey, I hear you—the temperature’s a lot lower in Winnipeg; so’s the rent.

In giving a novel touching on the theme of depression a Vancouver setting, I thought I had only two possible choices for time of year: November or January, Early Rain or Middle Rain. (Late Rain, with its hopeful cargo of spring, its soaking masses of Japanese cherry blossoms clinging to everything like glitter, was obviously too chipper for a book about the deep dark blues). And while it’s true that January is bleak, it really is hard to compete with November—not only sombre and sodden but also host of our most solemn, least whimsical public observances, Remembrance Day and Movember.

Like my protagonist, the amateur sleuth Dr. Annick Boudreau, I am the French Vanilla half of a Chinese-Canadian/French-Canadian romance. When my wife and I were planning our wedding fifteen years ago, my in-laws consulted a Chinese astrologer for advice on auspicious dates for the nuptials. They came back to us with two dates in November and two in December to choose from. The thought of a lifetime of anniversary dinners on some austerely frigid November evening with a seven-foot high cloud ceiling and one thousand percent humidity was immediately forbidding. Even as a then-semi-professional standup comedian and a woman willing to marry a semi-professional standup comedian, we had enough foresight to dodge that one. We opted for one of the December dates, and have celebrated our matrimonial love within the enfolding gaudy glow of Christmas lights every year since. 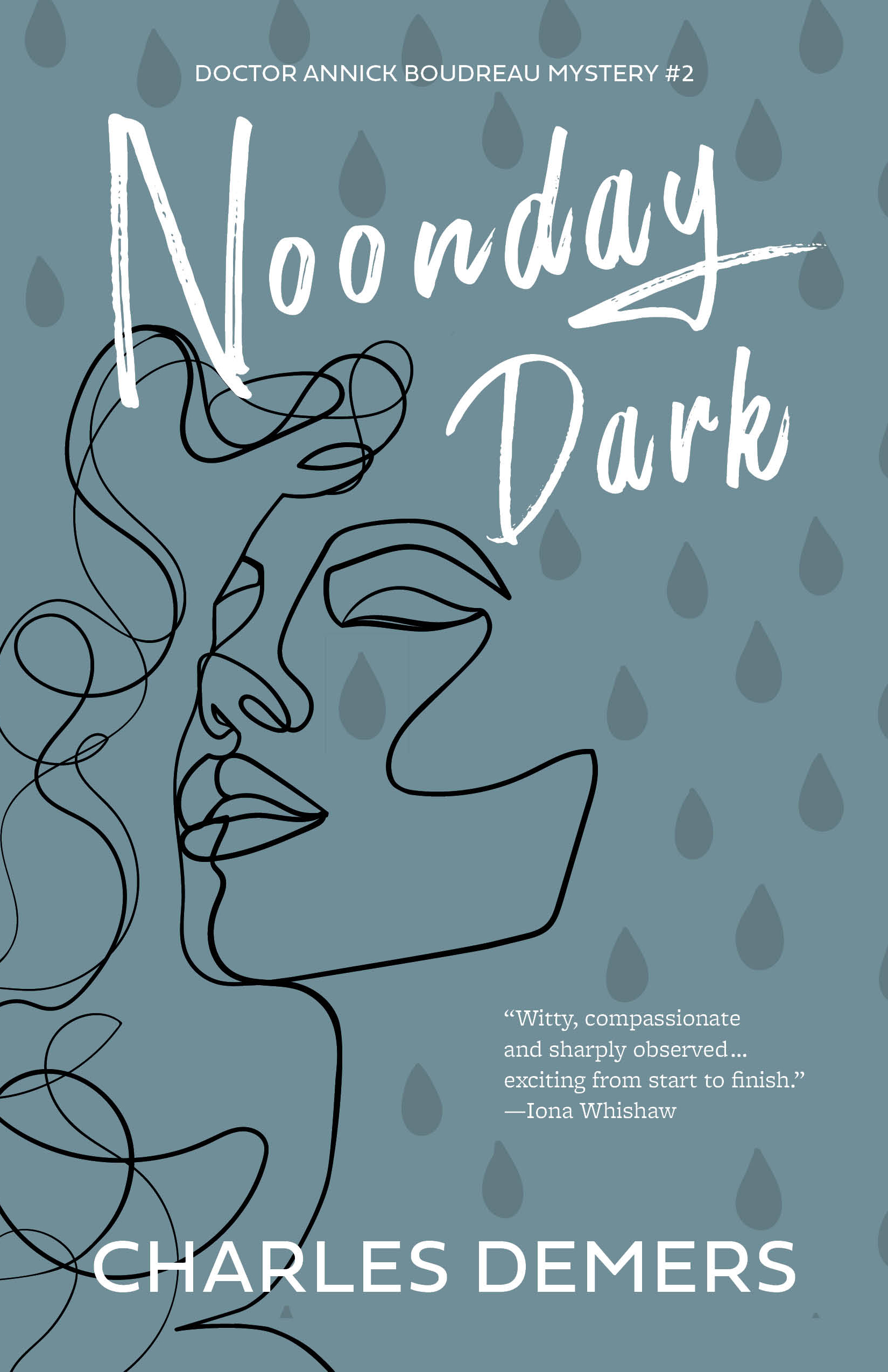 The author’s new novel is out now From Douglas & McIntyre.

Recently, however, a new contender has emerged on the Vancouver calendar to lay claim to the title of our most depressing season. For years, Vancouver summers were an idyll, a paradisiacal mockery of the rest of Canada’s shortcomings: no humidity! no mosquitoes! Visitors from points East would stand and blink in stupefied disbelief at doors without screens, windows without air conditioning units. Goldilocks herself was giving you the thumbs up from the volleyball sands of English Bay, and the three bears? They were a few feet over on Denman and Davie, having a Pride Weekend they’d never forget.

So what happened? Well, long story short: climate change. I’m sorry if this is the first you’re hearing about it. Relatively dramatic changes to local climates and ecosystems have led to extreme weather events, including the now-annual summer combustion of the province of British Columbia. Small towns like Lytton, burned to the ground, have had the worst of it. And huge swathes of BC live under either the threat or the actuality of evacuation orders all summer long.

All this has, as you can imagine, taken some of the carefree joy out of inner-tubing season. It has also turned every Vancouver summertime in recent memory into a Don DeLillo novel, with a “toxic airborne event” descending onto the spandex metropolis in clouds of smoke and ash. Uncanny orange sunsets have turned every parent in town into an army of Linda Hamiltons, feeling unable to secure our children’s futures and waiting in dread for Judgement Day; that is, if it hasn’t already arrived. In the face of this ashen, hickory terror, locals have been turning to an unlikely source of consolation: the incessant, non-stop, goddamn rain.

This year, over the course of the coldest, wettest non-spring that anyone could remember, Vancouverites were just drowning in silver lining.

‘Should be good for the fires though, eh?’

‘The reservoirs are gonna be full, at least.’

And with giddy, Christmas Eve-excitement:

With optimism like that, who needs pessimism? Sounds like it’s time to zinc up that nose, slip on those shades, and turn on that SAD lamp.

Read more of our essays, as well as book excerpts and reviews.