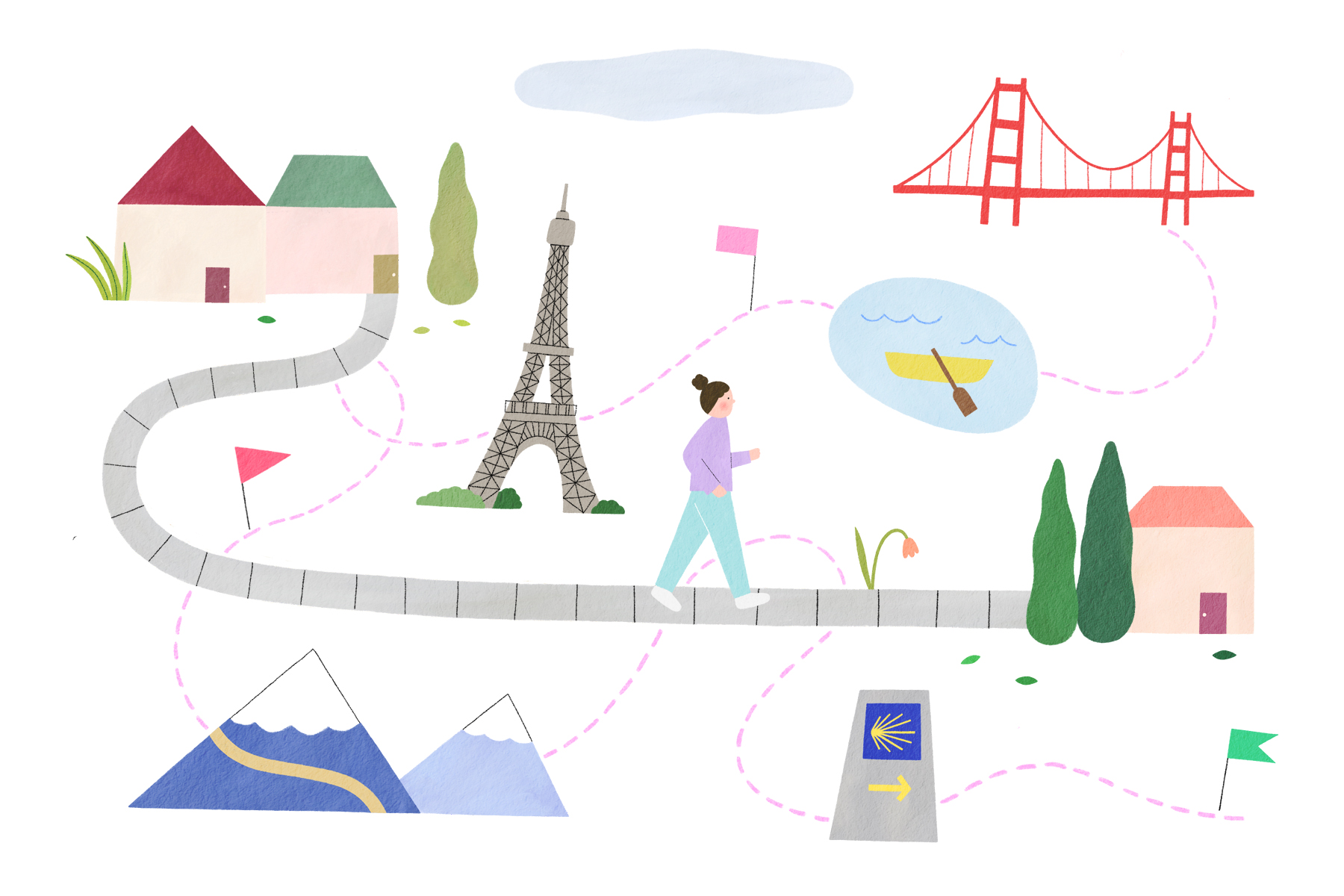 After an injury to my upper body prevented me from going to the gym six years ago, I took up walking. To stay motivated, I invented a game I call equivalency walking.

I pick a destination I would love to visit, note its distance from Vancouver, and then I hoof the identical number of miles it would take to actually reach that place (without the nasty elevation gains, of course). Because I like looking at smaller numbers—psychologically, the distances feel shorter even if I know they are not—I walk in miles, not kilometres.

In the beginning, I selected destinations close to home such as Bellingham, Washington, which is 55 miles from Vancouver. Then I chose more distant ones like Portland, Oregon, my former hometown, 316 miles away, and my favourite U.S. tourist city, San Francisco, 950 miles away.

The only other rule of my game is that wherever I walk, I need to educate (or re-educate) myself about the route or destination. After ambling to Seattle, for example—a place I have travelled to repeatedly—I hopped on the Internet to reacquaint myself with the city and gather intelligence that could later prove useful when planning a flesh-and-bones trip.

Buoyed by the success of these excursions, I challenged myself to equivalently walk across Canada in 365 days. I had recently become a Canadian citizen, and a coast-to-coast trek felt like a sweet way to commemorate my conferral. To seal my fate, I publicly promised to get it done by adding my pledge to the many others lining the wall for Innovative Fitness’s yearly activity challenge.

When I made the commitment, I had no idea how far I would need to walk or how much daily effort would be required to pull it off. I had already equivalently walked to San Francisco in under five months—more like moseying there, really—and I didn’t see how a walk across the country could take that much longer or be any more intense.

Canada is the largest country in the Western Hemisphere, and its main road, the Trans-Canada Highway, stretches 4,645 miles east to west, the third longest national highway in the world (Russia’s Trans-Siberian Highway is 6,800 miles, and Australia’s Highway 1 is 9,000). The idea of walking the Trans-Can resonated with me, but I worried I wouldn’t be able to pound that amount of pavement in a year and have a life beyond walking and work.

So, I locked onto the International Boundary that separates the U.S. from Canada instead, the demarcation line between our country and the lower 48. This portion of the longest international border in the world, which also includes another stretch that bumps up against Alaska, is 3,987 miles from sea to sea. While shorter than the Trans-Canada Highway by 658 miles, it is no wussy walk. I would still need to log 10.9 miles a day to complete it by my self-imposed deadline, and that is what I did.

A big walking project with an immutable deadline is a recipe for disaster unless you meet or surpass your target mileage every day. This is what I did to stay the course. First, I exchanged “iPad Hour” (the time in bed just after waking when I typically cruise for news on the Internet) for walking time. Initially, I willed myself out the door every morning at daybreak to put maximum miles on my well-worn Mizunos (so I wouldn’t need to scramble later). Now I cannot imagine starting the day another way.

Second, I grabbed extra steps wherever I could. I know I must have looked silly walking around inside or outside Starbucks rather than standing and waiting every time a barista made my doppio macchiato, but I was on mission time.

Third, I exchanged my free walking app that registers mileage only when I carry my phone for a wristband activity tracker that credits every step 24/7/365.

The Cure for Saddlebags

Yes, I walked nearly 4,000 miles in a year, but the activity itself was more time-consuming than arduous, so I was genuinely surprised—more like shocked—to see the difference ordinary walking made to the shape of my body. I lost inches off my waist, hips and upper quads and developed visible obliques and a higher, rounder bottom. Oh, and I dropped a dress size. What I didn’t lose was weight (it was never a goal), but neither did I gain any.

What I did accrue was the knowledge that, contrary to popular opinion, you really can be in two very different places at once. While I was physically exploring streets or trails in and around Vancouver, I was also mentally out in the wild, discovering interesting geography—like the multiple exclaves along our border lines. I had no idea what an exclave was before I took this walk (it’s a portion of one state or country geographically surrounded by another state or country; Point Roberts is a perfect example) let alone that we share a few of these irregular boundaries with the U.S.

Trekking across North America was satisfying, but it left me wondering what else I might discover if I were to carry on. I concluded that crossing all seven continents would be doable if I could pick my start and stop points on each landmass, and travel as the crow flies.

I decided to give it a shot.

Gods’ smiling, I found an “as the crow flies calculator” on the Internet that allows users to easily compute the distance between any two places on earth (sadly, this website is no longer operational and the aerial distance calculator on Google Maps is not as easy to use).

As an example, the website enabled me to efficiently navigate Antarctica. First, I selected my start and stop points from among the 12 year-round research stations there—McMurdo (U.S.) at one end of the continent and Novolazarevskaya (Russia) at the other—and then I schlepped the necessary 2,112 miles just doing what I do every day.

After my campaign ended in March 2020, I began hunting around for something to top a seven-continent extravaganza when I hit on the idea of putting “my little walking project” to bed permanently with a lap around the circumference of our big, blue planet.

I am now on target to wrap everything up—24,901 miles in total—sometime next year.

There is nothing remotely sexy about walking on city pavement. If fitness activities were fashion styles, walking would be normcore, no question. Nevertheless, if you can set a crazy goal (with a time frame) for motivation—like equivalently walking the Camino de Santiago, every street in the 4th arrondissement in Paris or the winding Rio Grande in Texas—you will have a rationale for covering serious ground, a reason to learn something about where you are headed, a healthier body, and legitimate bragging rights (if you’re so inclined), when you arrive at the end of your road.