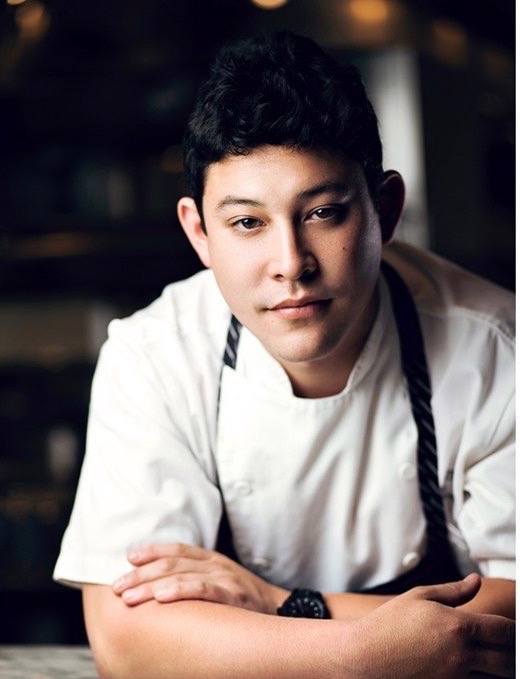 Quang Dang waits to chat with me at the bar of the Vancouver Fish Company on Granville Island. I’m immediately struck by how different he looks from when I used to watch him on news segments and demonstrations. Back then, he wore a formal chef’s coat, often with an apron, as he transformed local ingredients into beautiful, painstakingly crafted plates.

But today, Dang sports a tie-dye T-shirt and sits with casual ease, making pleasantries with the bartender. It’s his day off, and he’s come from golfing with his boss, Donald Guthro. He shows me photographs on his phone of Guthro posing on the fairway, and laughs at the hijinks of the morning. He explains he’s been golfing more and spending time growing tomatoes and salad greens in his garden. “I focus on managing my own personal health more than I have ever in the past,” Dang says.

The road to a balanced life has been long and hard fought. Three years ago, Quang Dang was the executive chef at Araxi Restaurant and Oyster Bar in Whistler and coming off of a gruelling 50-odd consecutive days of work. Dang had been feverishly scrambling to cover for his executive sous chef⁠—off with a broken foot⁠—and a staff shortage in the thick of a hectic summer. “And then eventually my brain just exploded,” he says. It was literal: Quang had a hemorrhagic stroke and would have died from the bleeding in his brain if he hadn’t received medical attention in time.

“You put a lot of pressure on yourself to make things happen. That’s naturally what chefs do. Everyone has a limit, and I pushed it too far,” Dang says. The stroke marked the start of a professional and personal upheaval that concluded roughly when the pandemic hit. Dang spent 2020 sleeping and recharging until an offer from Guthro convinced him to emerge from his much-needed hibernation in November.

“He’s been a friend of mine for many, many years, and we always spoke about working together over the years and doing some projects hand-in-hand. We thought that would be a cool idea,” Dang says. Guthro is the founder and chef director of D.I.C.E.D (Diverse Innovation in Culinary Educational Development), which provides tuition-free culinary education to promising students by raising money through catering, sales at the Discovery Café, and food and beverage consulting.

“It’s an opportunity for me to create more chefs. I think one of the reasons I got overtired and worn out was because there aren’t enough chefs and cooks,” Dang explains. The labour crisis has only become worse during the pandemic, and part of the solution is to expand the talent pool. Better working conditions and higher wages are also needed, but Dang acknowledges the complexity of the problem: “How high do people want the menu prices? The money can only come from so many places.”

Dang passes on difficult lessons learned in the trenches of the restaurant industry to aspiring cooks. “I try to help them learn from my mistakes. I’m not perfect. I’m only human,” he notes “I’ve made lots of mistakes, and I encourage cooks to make mistakes. How you recover from those mistakes is going to be more important.”

Dang now works as Guthro’s second-in-command, overseeing two kitchens that produce 850 meals a day for low-income people. A day could see him checking in with the chefs who run food programs or, like recently, dropping off meals at shelters after a last-minute mix-up with the delivery driver.

His work at these kitchens, one affiliated with Vancouver’s MPA Society and the other with Options Community Services in Surrey, has dramatically shifted Dang’s perceptions of wellness and ability in a kitchen. For example, one of the cooks, who lives in assisted living, can only work for short periods but is phenomenal when given a task he can manage. “Why don’t we look at what people can do, not what they can’t do? Everyone has these labels and rules of what their employees are supposed to look like. If a guy can only wash 10 dishes every half-hour and that’s all he can do, that’s 10 more dishes done than you had before,” Dang says. When reviewing admissions for the culinary program, Dang picks people seeking an opportunity to grow in the industry, one perhaps otherwise withheld due to the high cost of culinary education.

Dang also believes in dissolving hierarchies associated with food itself. Asked if he cooks on the line at D.I.C.E.D, his reply is immediate: “Absolutely. I still make the burgers too,” adding that so does Guthro. Working alongside the trained chefs are talented newbie cooks, like Brianna Burke and Ciara Morning Sky Stick. While previously Dang was best known for the elegant plates he crafted at restaurants like C Restaurant and West, he actually started his career in the dish pit at JOEY (known then as Joey Tomato’s) before ascending the ranks. Dang draws from these humble beginnings for his work at the Discovery Café, where the menu celebrates unassuming diner fare: a classic breakfast; nachos with plenty of cheese, jalapeño, and house-made salsa; and daily features such as a barbecue chicken club with bacon, cheddar, and smoked mayo.

While Dang sometimes misses the intensity of haute cuisine, he finds different satisfaction with more casual fare. “With simpler food, you can touch more people,” he says. Even he’s surprised by the widespread success of a burger he created to appeal to a café regular and to his mom, who only likes cheese and onions on hers. The Cuddle Burger consists of a hand-pressed four-ounce local beef patty, melted mozzarella cheese, D.I.C.E.D burger sauce, and onions two ways, charred and fried until crispy. It’s all lovingly sandwiched in a toasted potato bun. “It’s become a cult burger,” Dang says. The ingredients are fresh, the flavours and textures playful, and best of all, the burger is only $6.50.

Dang has come a long way since diners footed a substantial bill for a taste of his food. Now, he regularly mows the lawn of the café’s outdoor patio, which he affectionately calls his new dining room. “There are so many different ways to serve people,” he says.

He advises young cooks to find a mentor to help guide them through the demanding, sometimes tumultuous terrain of their career. “Cooking requires skill, a little bit of artistic flair, a sense of judgement, and a palate on top of that. It’s a very all-encompassing line of work,” he observes. Despite the significant bumps he’s encountered, he looks forward to the next chapter in his career. “I feel like I’m along for the ride. It definitely hasn’t been boring. I feel reenergized,” he says.