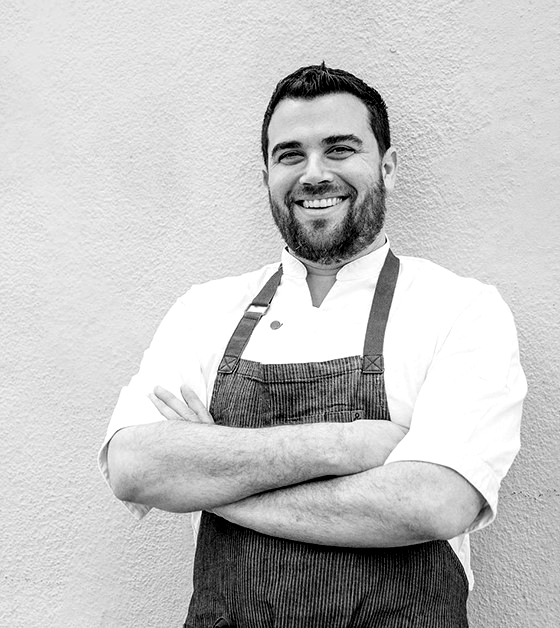 When it comes to the famed, highly prized Iberian hogs whose meat comprises the most expensive hams and sausages in the world, there are varying grades of quality. The uppermost—the cream of the cream of the crop, you might say—is jamón ibérico de bellota, for which the hogs feed on acorns fallen to the ground in autumn, to the tune of 10 kilos a day per animal. The result is sensationally nuanced, flavourful ham, found easily enough in Spain but almost impossible to come across in the United States or Canada. Almost impossible but not quite, thanks to San Francisco’s Bellota.

“America is gobbling up Spanish products, Spanish restaurants. The past five years have seen a real surge,” says Ryan McIlwraith, chef of the Spanish-inspired Bellota. Chef is in his hometown of Vancouver to cook a collaborative dinner with Chris Whittaker of Timber and Forage as part of Dine Out, and he looks admiringly at a set of five fire-based cooking grills sitting in the courtyard next to the bar. Bison shanks will soon be slow-cooking—not braising but smoking—on one of the grills. “I can’t wait to try that bison,” says McIlwraith. Whittaker adds, “I’ll start them at 2 a.m. tomorrow morning.” Both chefs are grinning, and wag their heads approvingly.

McIlwraith spent the first 10 years of his career “working in the world of celebrity chefs.” This included Gordon Ramsay at The London NYC, Thomas Keller at Fleur du Lys in Las Vegas, and eventually Michael Chiarello at Coqueta in San Francisco. He then put on his toque at Bellota. A restaurant of his own, at last. “I had the luxury of spending a month in Spain for each of the past five years,” he says. “But I am a Canadian chef, cooking Spanish food. If a grandma from Spain moved to Canada, she wouldn’t import all her ingredients. She would find local things to cook with, in her Spanish style. That’s what I do.”

For McIlwraith, the regionality of Italy’s cuisines is possibly surpassed by Spain’s. “Spain could fit right into Texas. But that relatively small size has 800 years of Moorish influence, and the more traditional cooking in the south is radically different than the more European styles of the north,” he says. “Catalan cooking is just so different than Basque.” All that variety adds up to a lot of inspiration, and while McIlwraith was dazzled by molecular cooking and high-end New York chefs early in his career, he now finds that the most rewarding challenge is in achieving vivid, distinct flavours: as he puts it, “simpler, almost rustic cooking.”

Still, the menu a Bellota has its own creative bent and its fair share of intricacy. The point is that McIlwraith never overdoes it, keeping the focus of each plate quite pure. The fabada of white bean and chorizo stew, with charred and fermented cabbage, grilled octopus, and pork belly, is a prime example; as is the plancha-roasted whole seabass, accompanied only by mushroom, escarole, and a jamón and kohlrabi salsa.

Still staring at the array of cooking devices in the courtyard, McIlwraith muses out loud, “I always learn something when I cook in someone else’s kitchen. I know I can learn something new from the dishwasher when I talk with him. And I am able to give great learning experiences to my own sous chefs, who are early in their careers, and maybe don’t get paid what they are worth all the time. It’s that community aspect of cooking together I love. And, there’s that bison.”