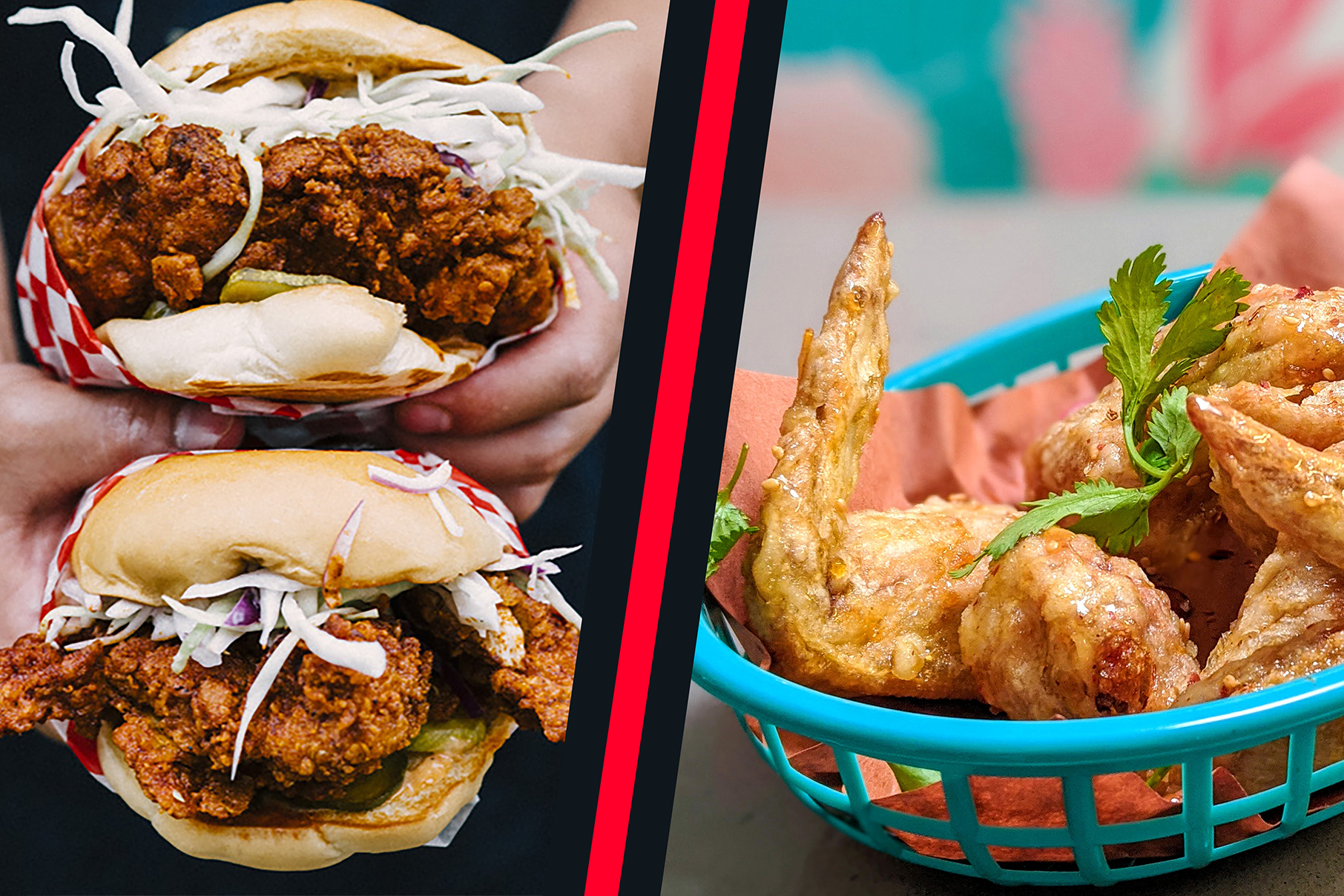 Crispy and crunchy on the outside, juicy and tender on the inside—that’s when you know you’ve hit the fried-chicken jackpot.

Here in Vancouver, we’re spoiled for choice: fried chicken and waffles have become a popular brunch staple, top-notch deep-fried wings can be found in many Chinese shopping-mall food courts, and there are countless Korean fried-chicken spots popping up around town. 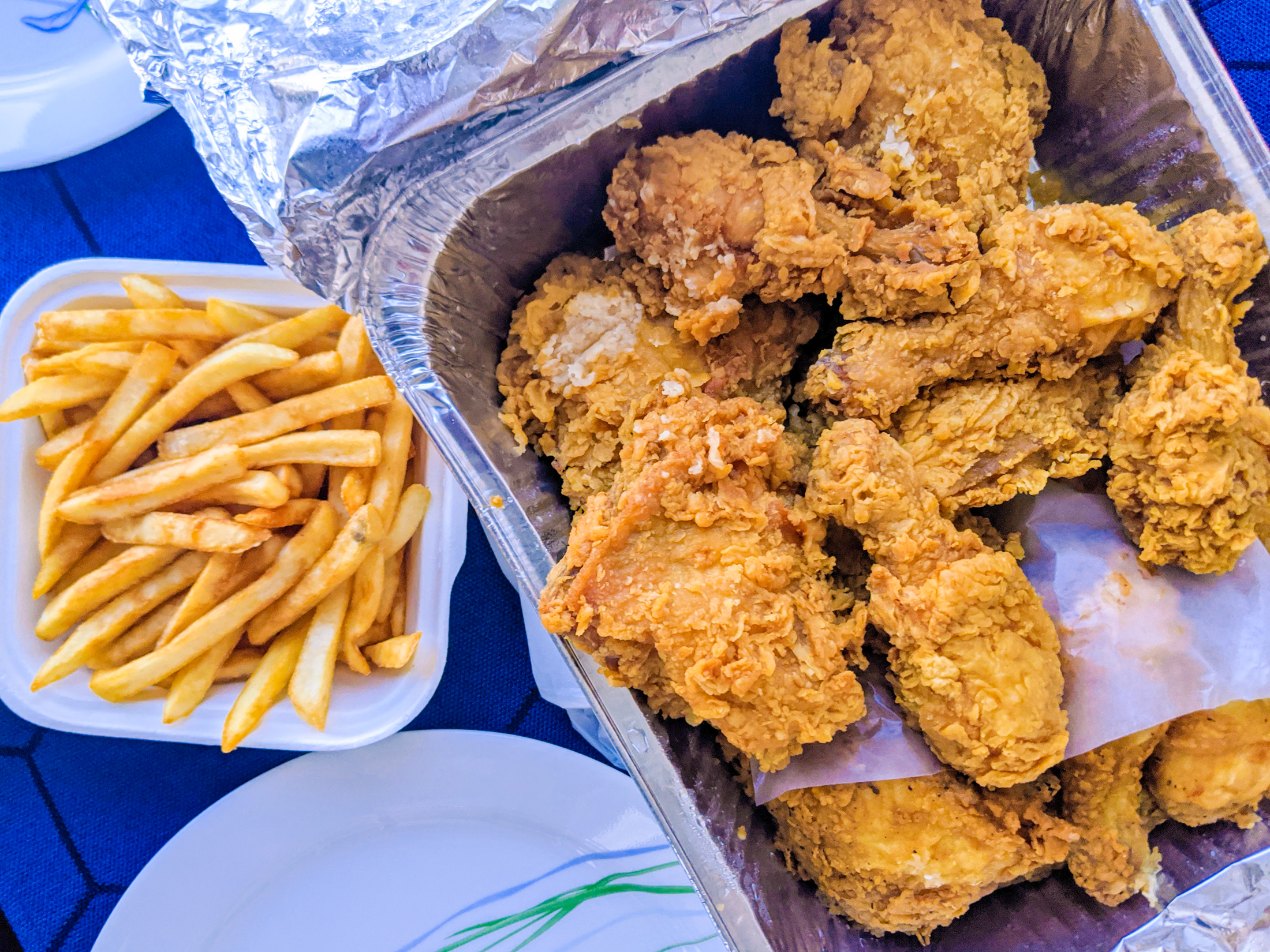 When I was growing up in the suburbs, our immigrant family usually cooked at home. My earliest memory of enjoying fried chicken was probably in elementary school when our cousins visited from overseas during the summer. Too tired to cook in the evening after taking us to play in parks and playgrounds all day, my mom would treat us to a family-size order of Church’s fried chicken. The hardest part was choosing between the thigh or the drumstick—but we usually got one of each. One bite and we were hooked: the crispy skin paired with tender meat was a dream come true.

As I got older and started to dine out more at food courts and restaurants, I discovered Asian-style fried chicken. I wasn’t used to Chinese-style deep-fried wings at hot pot or Korean fried chicken topped with a huge pile of cheese—I was more familiar with chicken karaage and mayo at Japanese eateries—but clearly I’d been missing out.

Now I know that really good fried chicken comes in many forms, from classic to innovative Asian styles, even though everything—from the marinating and seasoning processes to deep-frying techniques and even to plating presentation—may differ from East to West.

So how do you like your fried chicken? Here are some of our top picks for the best fried chicken in Vancouver, from classic buttermilk to Taiwanese deep-fried salty pepper and more. 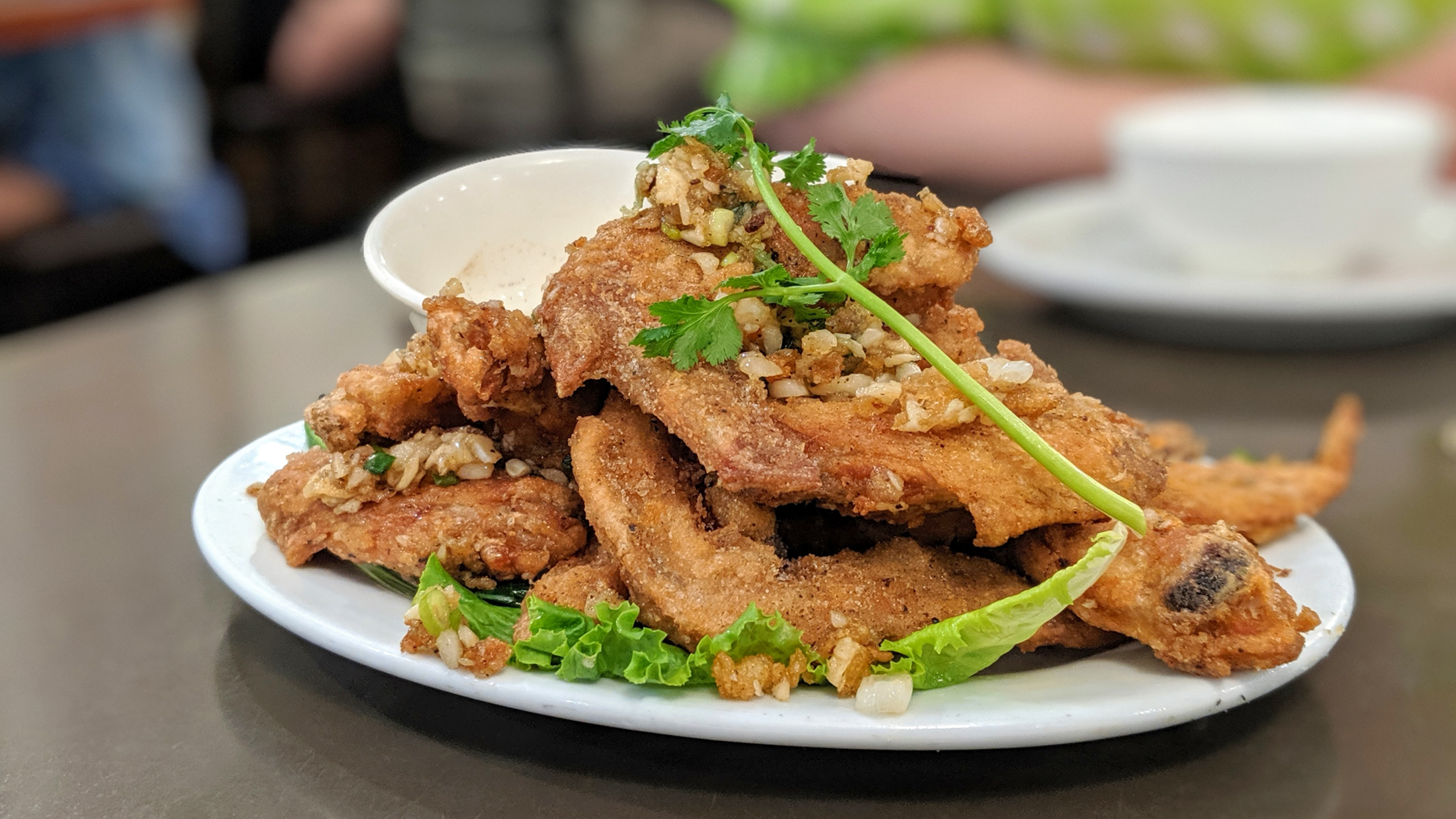 It’s hard to tell what the exact seasoning is for the deep-fried wings at Phnom Penh Restaurant, but they are iconic, and every table will have an order or two. This Southeast Asian eatery’s take on fried chicken has many flavour profiles: salty, sweet, and tangy. Chopped green onions and an overload of diced garlic adds to its overall mouthwatering taste. Dipping the wings in the side of lemon juice and black pepper sauce is also essential or they don’t feel complete.

Another Southeast Asian chicken-wing competitor that recently arrived on the Vancouver food scene is Potluck Hawker Eatery. Its fried chicken wings, made with either black pepper or fish-sauce caramel with chili flakes and sesame-fried shallots, are getting a lot of love on social media. The latter has a particularly tasty glaze with a not-too-thick batter.

The crispy deep-fried chicken wings from Wu Fung Dessert at Aberdeen Centre’s food court in Richmond are also a must-try. The crunchiness and crispiness can be addictive, and one order usually isn’t enough. 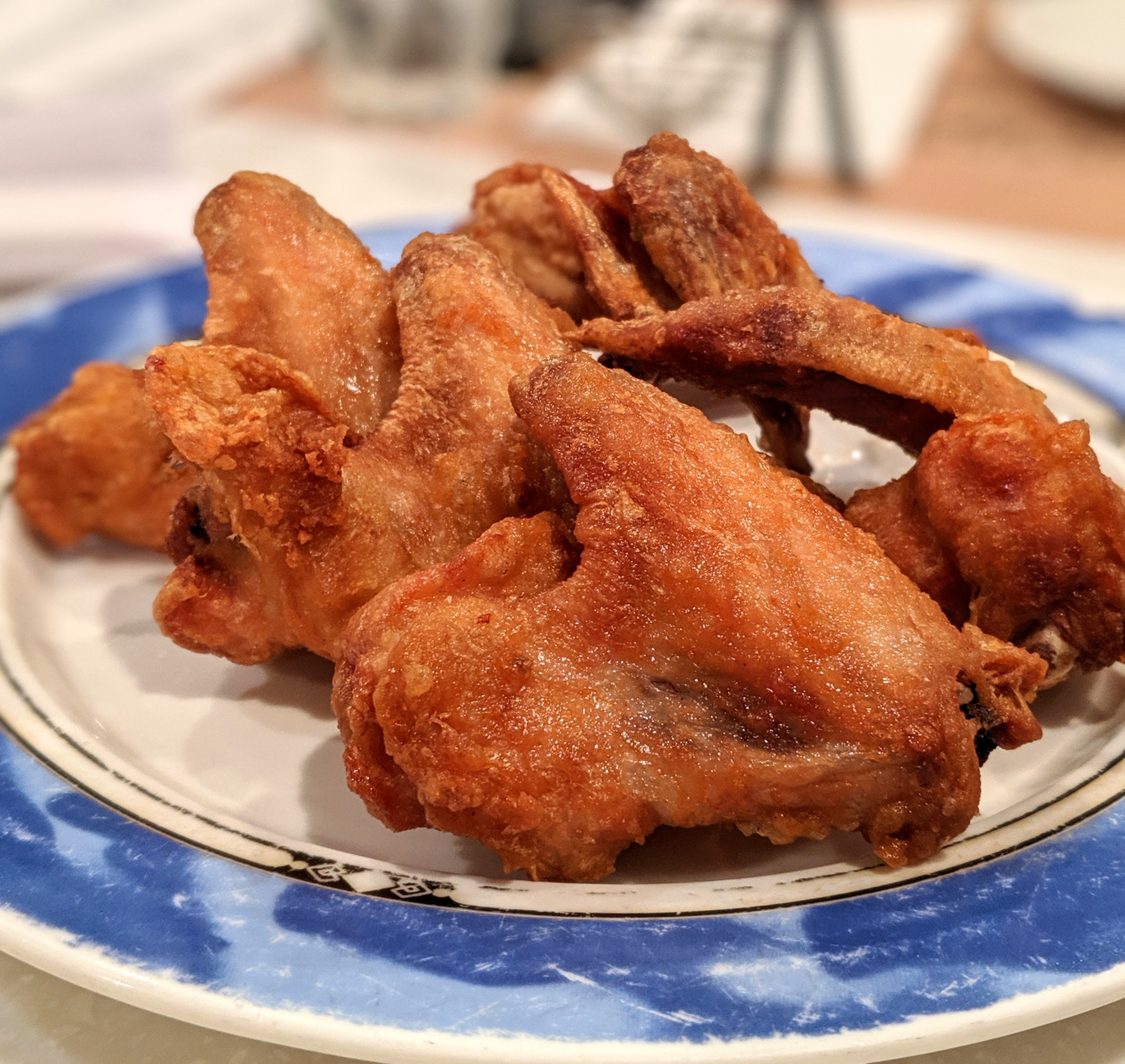 A similar take on Wu Fung’s Chinese-style fried chicken can be found at Jun Yuan Restaurant on Victoria Drive. Its deep-fried chicken wings are super crispy, and the meat is tender and full of flavour. The best part? You can order however many your appetite can handle because the wings are all-you-can-eat at this hot-pot restaurant.

Korean import BBQ Chicken has been on a hot streak ever since it got a major plug in the hit Korean drama series Crash Landing on You. When the actors on the show bit into the golden-hued fried-chicken drumstick, every person watching wanted to eat the same thing. With a handful of  locations around Metro Vancouver,  BBQs menu includes several options, from its signature golden fried chicken with perfectly fried batter to its secret sauced chicken (made with 20 natural ingredients) to its hot spicy chicken.

Wang’s Taiwan Beef Noodle House has been tucked away in the Marpole neighbourhood for many years specializing, as its name suggests, in Taiwanese beef noodles. But one of the most popular dishes on its menu is the deep-fried salty pepper chicken. Seasoned with a combination of delicious spices, this fried-chicken dish is a staple in the Asian island nation, and this eatery makes it the way they do it back home. 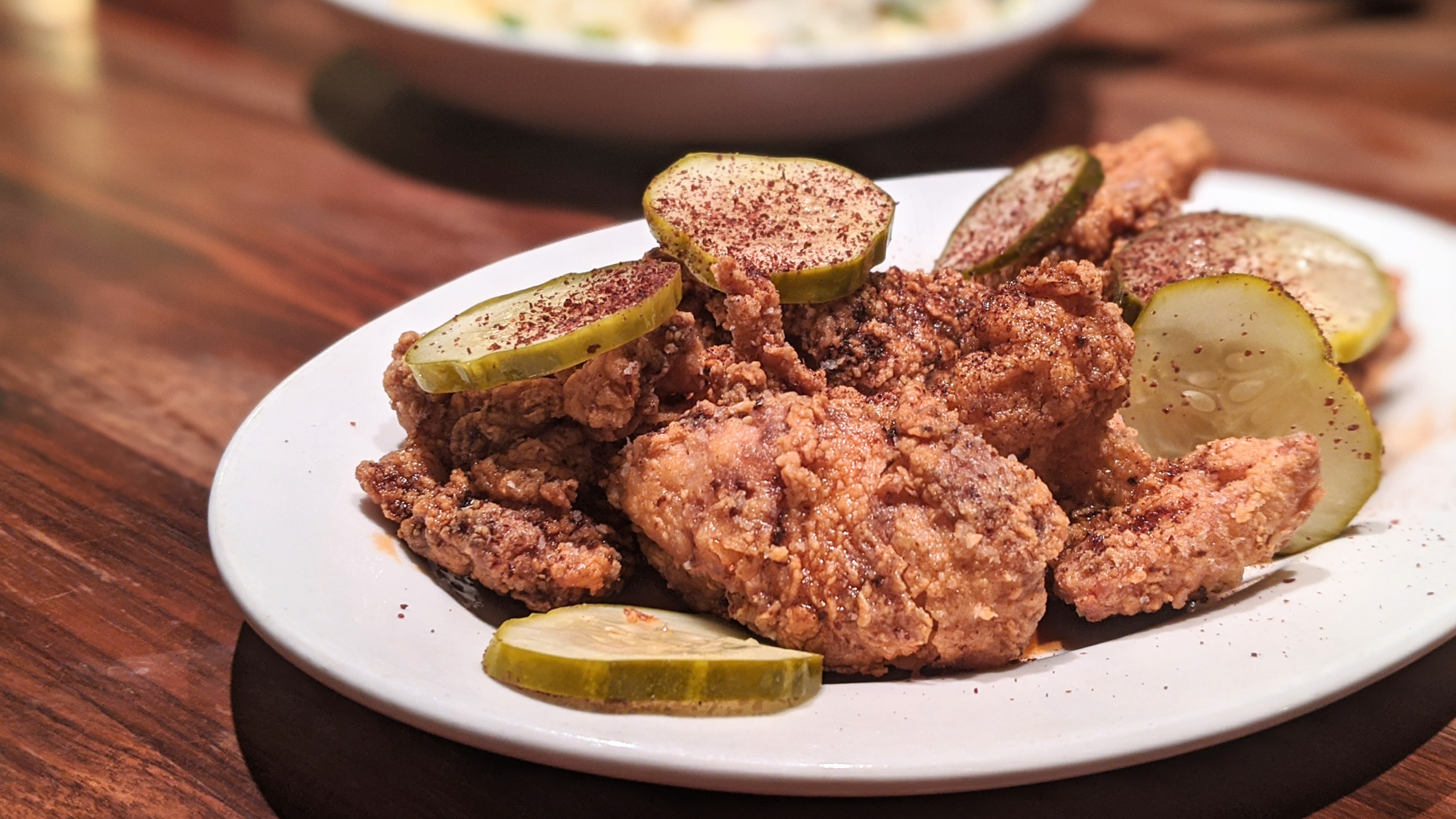 There are what seem like a million items on the food menu at downtown’s Nightingale, and we’re not complaining. But a standout favourite ever since the restaurant opened three years ago is its buttermilk fried chicken. The boneless pieces of chicken are perfectly fried, paired with spiced maple syrup and pickle slices, and sprinkled with sumac. With its convergence of sweet and savoury, it’s become a coveted dish among all types of foodies.

Even though it’s an international fried-chicken chain, we still love Church’s Chicken because you can always count on its consistency, whether you’re picking up lunch or a midnight snack at one of its 24-hour locations. Its original and spicy flavours are both crispy, and the meat inside is always juicy with just the right amount of oil. 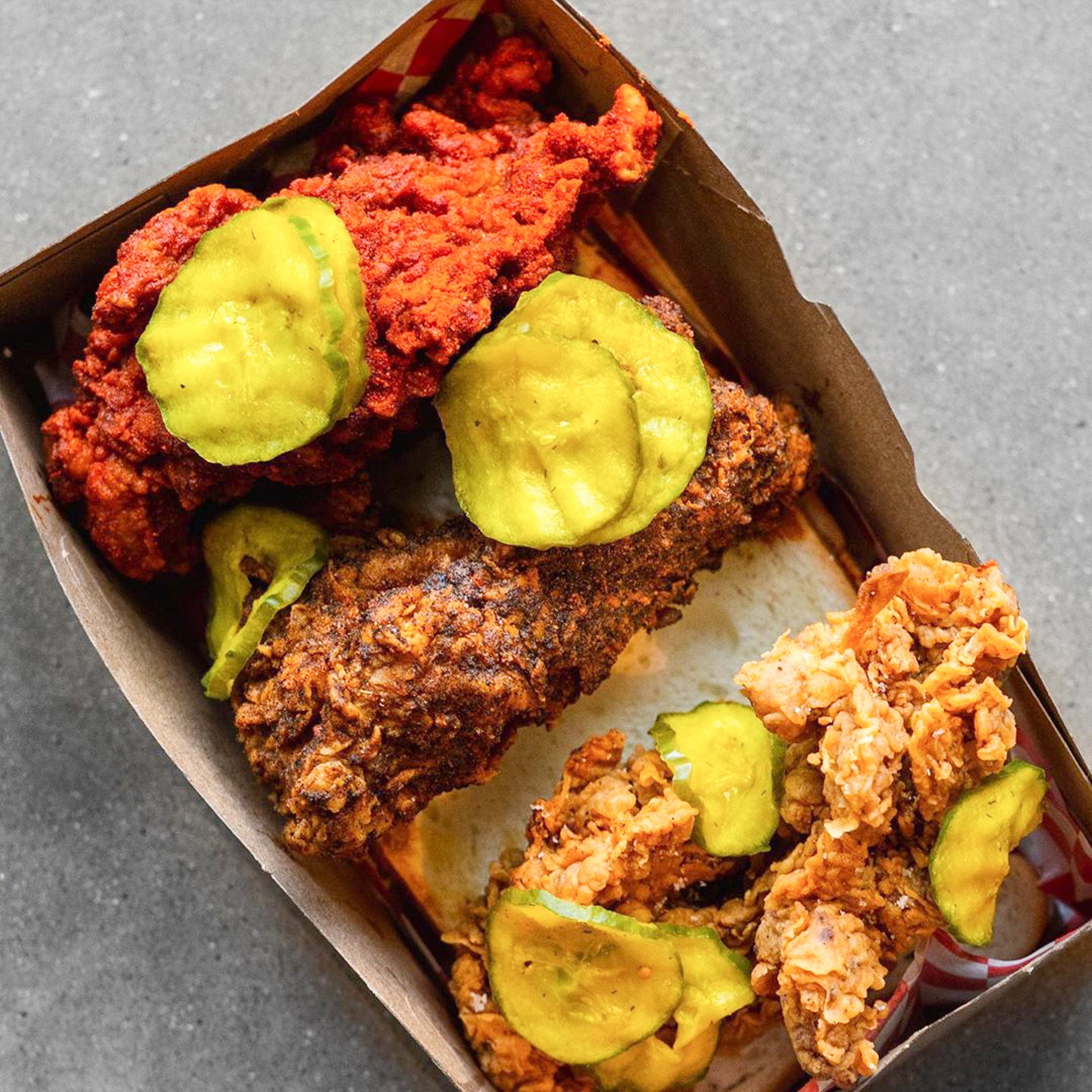 When the Downlow Chicken Shack opened on Commercial Drive, the counter-service spot quickly commanded long lineups daily. Known for its Nashville-style hot chicken, Downlow’s fried chicken is crispy and coated with a distinctly memorable signature spice blend. Various heat levels range from mild to medium to Side of Milk—for those who can handle extreme spiciness. Its fried-chicken sandwiches are equally popular.

Richmond’s L.A. Chicken is often compared to Church’s, and there’s an ongoing debate about which is superior. Although it’s a mom-and-pop shop, it has a loyal local fan base that eagerly lines up for orders of perfect golden-brown fried chicken. Featuring nice, crispy skin and juicy meat, this fast-food spot can definitely rival many fried-chicken chains. Choose between regular or spicy flavours, and pair it with some fries and coleslaw for a satisfying meal.

The Frying Pan food truck dishes out some fantastic fried-chicken sandwiches, blending the flavours of Nashville and Korean-style hot chicken, and we hear its dirty hot chicken fries are very tasty, too. Check out its schedule online to make sure you know where its wheels will be parked throughout the week—it’s usually at the corner of Burrard and Pender. 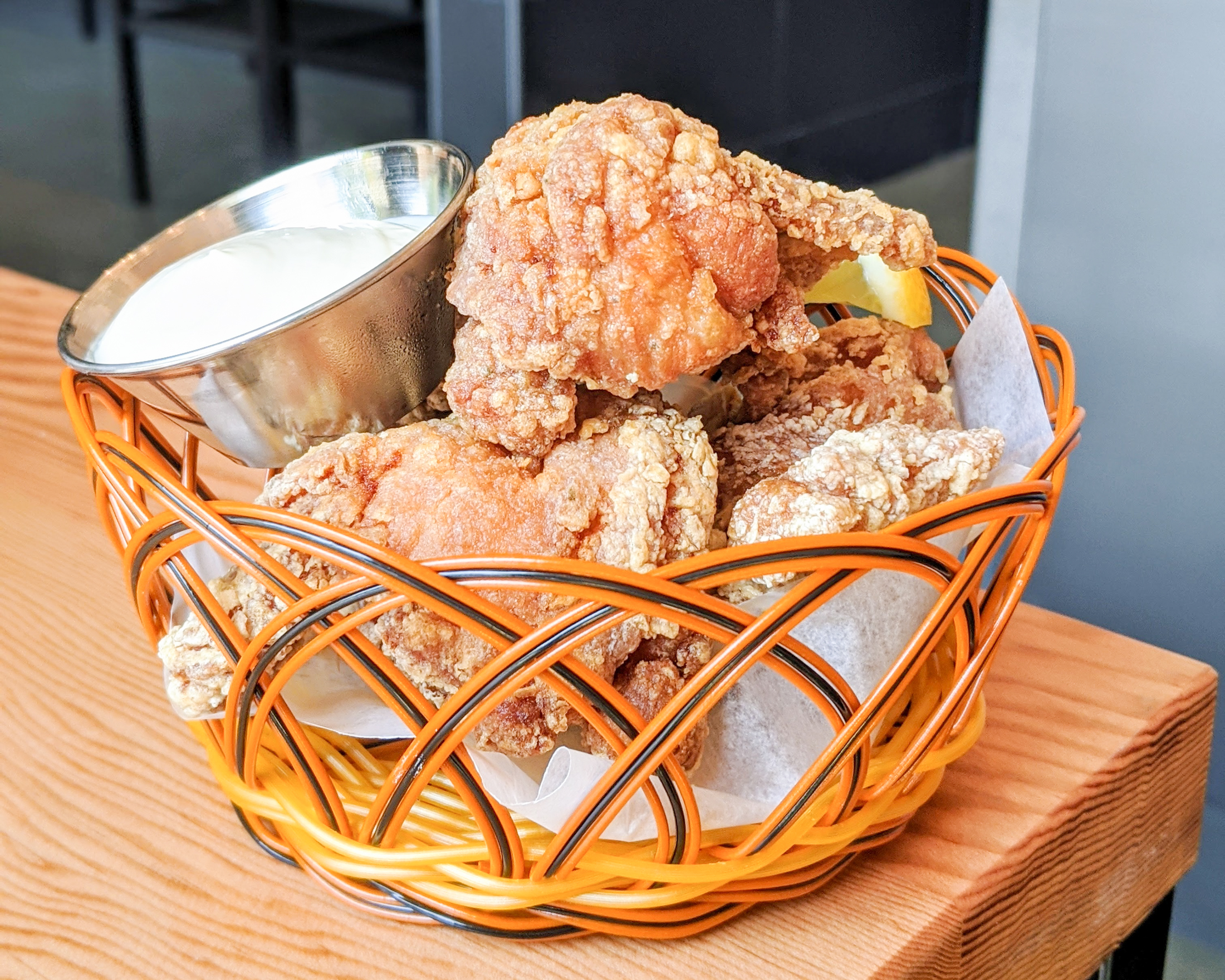 Toronto-based Kinton Ramen may have just softly opened its doors at UBC, but its rich broth and noodles are already attracting plenty of attention on campus. And its chicken karaage shouldn’t be overlooked, either. Its original karaage features fried chicken with garlic mayo and lemon, and is balanced and not too oily, making it a great appetizer. There’s also a hot karaage option, which is fried chicken doused in chili sauce and topped with aonori (dried green seaweed).

Read more of the latest on Vancouver’s local Food and Drink.