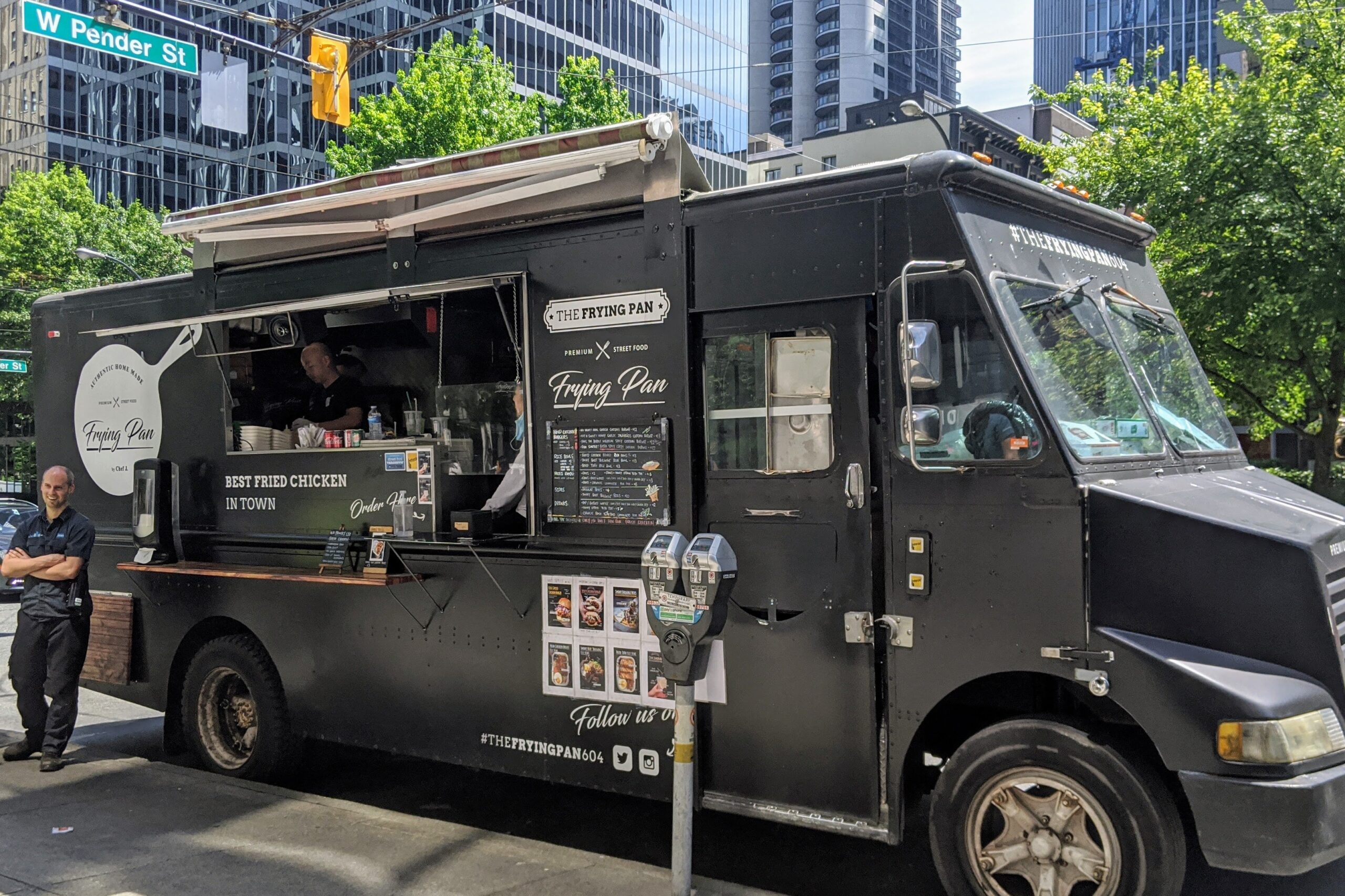 In an ideal, pandemic-free summer, we’d be lining up at our favourite food trucks parked at music festivals, night markets, and other large-scale events. But the world is different now, and these highly anticipated happenings are on hold for the foreseeable future. If crowds are key to a food truck’s success, can they survive a season without them?

For Tacofino, which launched a small fleet of food trucks after its restaurants’ West Coast–style tacos and burritos gained a following here, everything ground to a halt in mid-March, just days before health authorities mandated the closure of restaurants and bars.

“We shut down all our operations, including the trucks, just out of consideration for the safety of everyone,” says Gino di Domenico, managing partner at Tacofino. “We wanted to make sure we did our best to meet and exceed the requirements and regulations to reopen. The trucks have been back on the road for about a month now.”

Two out of its four trucks are currently operating, but the landscape is completely different. In addition to implementing new safety measures like going cashless and increasing sanitization, Tacofino’s previously stationary trucks in the downtown core have had to roam through other parts of the city in search of customers because many office workers are still working from home. 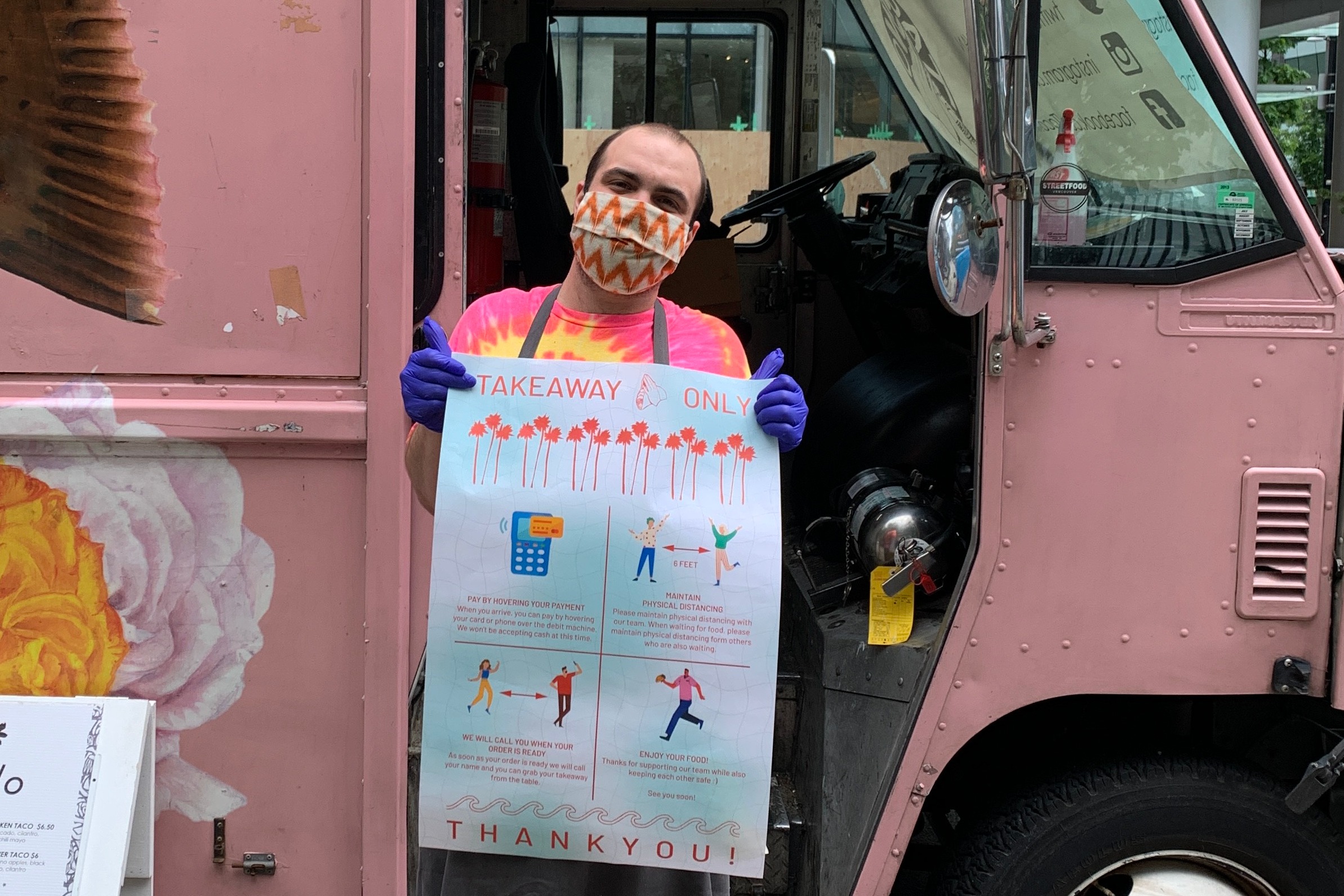 “Our trucks downtown are now moving to try to find where people can social distance and still have that volume you require to be profitable,” di Domenico explains.

“I do think food trucks have a great role, when the weather is good, in providing food to groups of people without being in an indoor space,” he adds. “I think it’s a great, lower-overhead opportunity for people to make some money.”

It’s true that food trucks should be the obvious answer to eating out during a pandemic—their business model is entirely geared toward takeout. But with restaurants in close proximity on every street, many of which have started offering takeout themselves, there is stiff competition.

The Frying Pan food truck is stationed at Burrard and Pender Streets, and is well known for its Nashville-meets-Korean-style hot chicken sandwiches. Owner Jacob Jung is only operating one of his two trucks and says business has dropped 50 per cent.

“We got the 75 per cent wage subsidy from the government, so that is helping,” Jung tells me, as he closes up for the day. “We will also go to some farmers markets on the weekend.”

Jung’s truck is parked mere steps away from a large chain restaurant, and countless other dining spots are within a five-minute walking radius. But he still thinks food trucks face fewer challenges than traditional eateries. 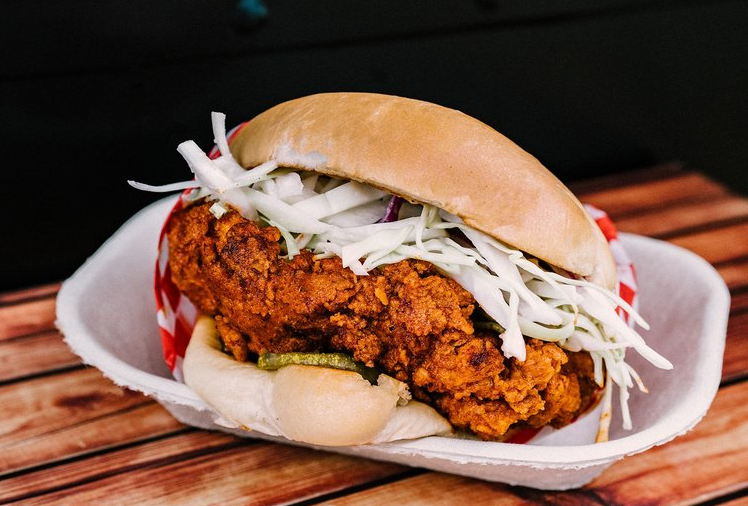 Photo courtesy of the Frying Pan.

“I think some customers who don’t want to eat inside restaurants right now can eat takeout or get delivery—food trucks are part of the answer,” he says.

There’s been a lot of uncertainty surrounding the livelihood of the food-and-drink industry, including the survival of food trucks. But it’s not all dark clouds in the forecast for Vancouver’s food-truck scene. Fresh faces are emerging, and they aren’t afraid of the logistic and economic challenges that may loom.

Indish officially launched in the second week of June, and it’s one of the newest roaming trucks around town. Co-owners Anant Singh and Tushar Shroff had been working on their business model since October 2019, before COVID-19 made headlines.

Despite their background in marketing and finance, it was a big leap of faith for the pair to dive into establishing and operating a food truck in the middle of a pandemic. Indish specializes in authentic Indian flavours with a modern flair, and its menu format (90 per cent of which is plant-based) allows customers to easily customize their meals. They can choose a rice bowl, paratha wrap, or poutine, paired with a sauce (including butter and coconut korma) and protein (such as roasted vegetables or chicken tikka). 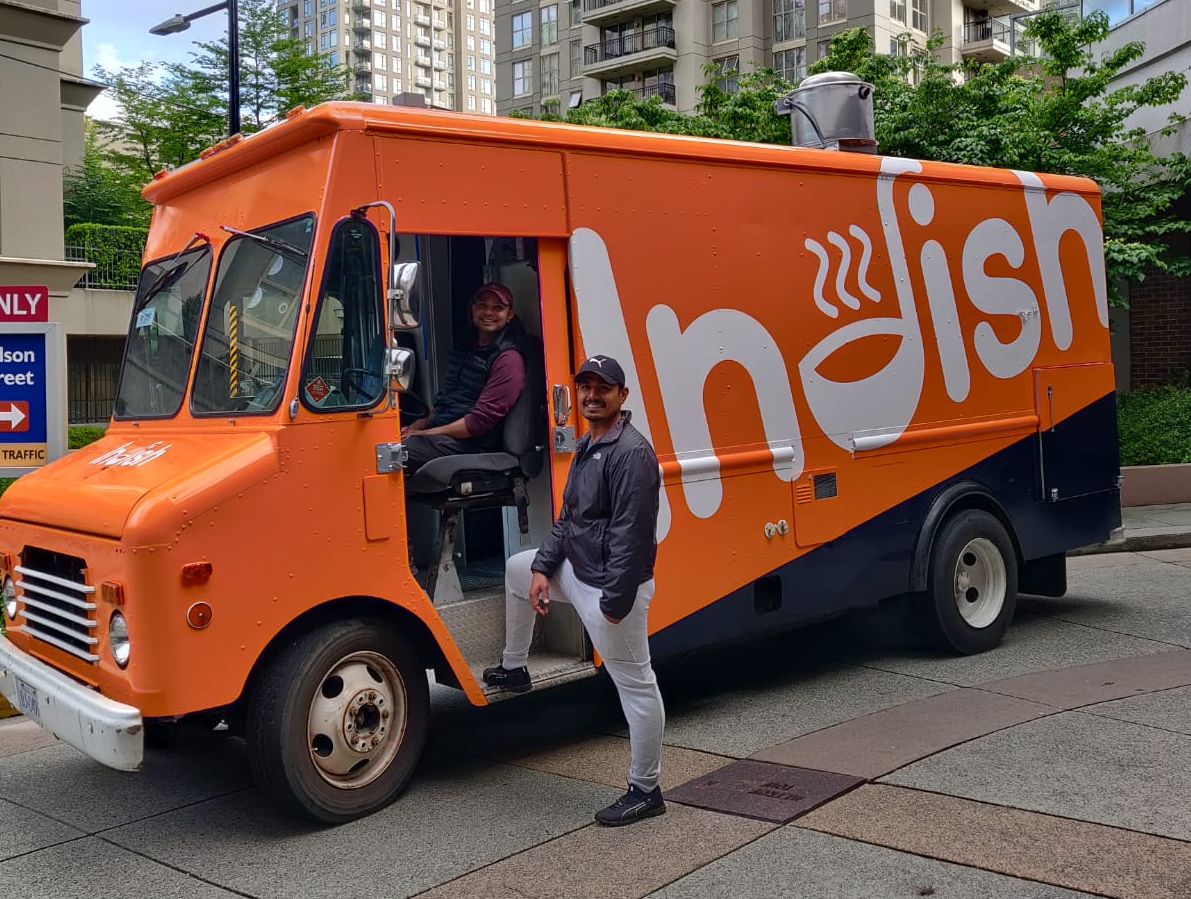 When the pandemic struck and everything started closing down, Indish’s co-owners had to pivot and adapt. “Pretty much everything changed for us. The working hours, the staffing levels, the audience we have to go after—all of that has completely changed,” Singh says.

He understands that food-truck revenue largely comes from events, but Indish has a multi-pronged plan to make up for those losses, which includes partnering with breweries, focusing on deliveries, and getting its foot (or wheel) into farmers markets.

Singh hopes Vancouver’s beautiful parks can be part of the solution as well. “I do see a lot of value in people being able to maintain social distancing and just come up to a food truck, order food, and enjoy the park,” he says.

“We’re very, very new, but the food truck community and the city has helped us a lot. People are coming out to us again and again to try out the new truck. Even with the pandemic, we have been getting decent traction, and I’m very thankful to the community here in Vancouver.”

Running a restaurant in the current climate is difficult enough, but Torafuku’s owner Steve Kuan is also on the hunt for a food truck. The Pan-Asian dining spot used to operate the Le Tigre food truck but sold it after a mechanical breakdown.

Finding a food truck won’t come cheap for Kuan: second-hand or existing food trucks can cost anywhere between $60,000 to $100,000, he says. It’s an investment and a risk, but he believes many customers will find food-truck fare more attractive than dining inside a restaurant—he has firsthand experience with slower dine-in traffic. 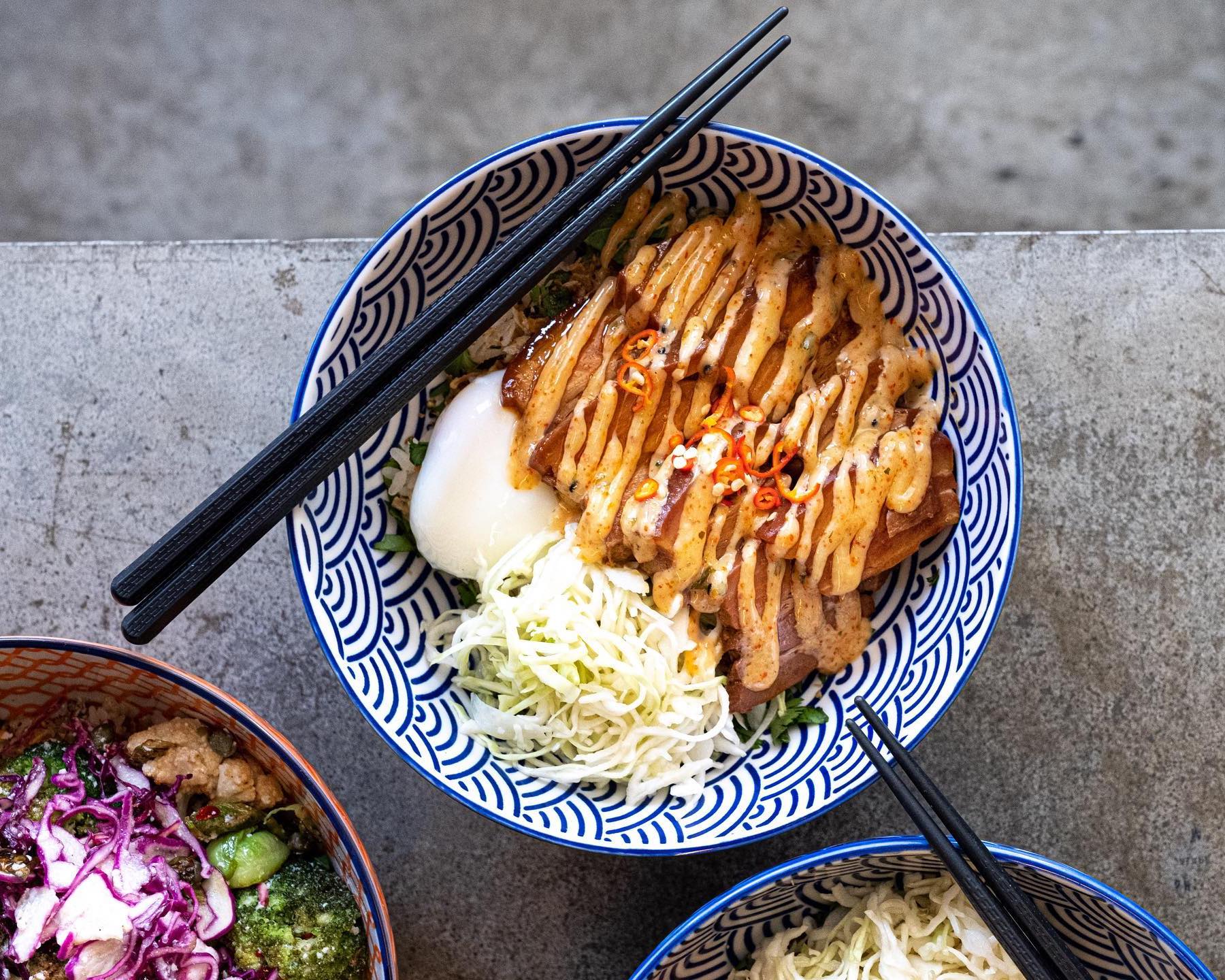 Photo by Leila Kwok/Courtesy of Torafuku.

“We have built the Le Tigre brand before, from many years ago, and it has been successful. Customers are very loyal to the truck,” he says, “even though we sell the same food at the restaurant for lunchtime. Working on a food truck is very rewarding, seeing the customers follow you every week.”

Food trucks are also more affordable to run, especially during a pandemic, he says. “The budget is a lot lower than restaurant settings, and food trucks give customers a lot more options.”

Food-truck fans can also catch some of their favourites on Saturdays in Burnaby at one of the only food-truck festivals still on in B.C. this summer. The Brentwood Great Takeout, organized by the Greater Vancouver Food Truck Festival at Grosvenor Brentwood, runs every second Saturday from 11 a.m. to 6 p.m. at 2150 Alpha Avenue alongside the Brentwood Artisan Farmers’ Market. Initial vendors have served up mini doughnuts, donairs, mac and cheese, ice cream, and more.

Read more of the latest on Food and Drink.