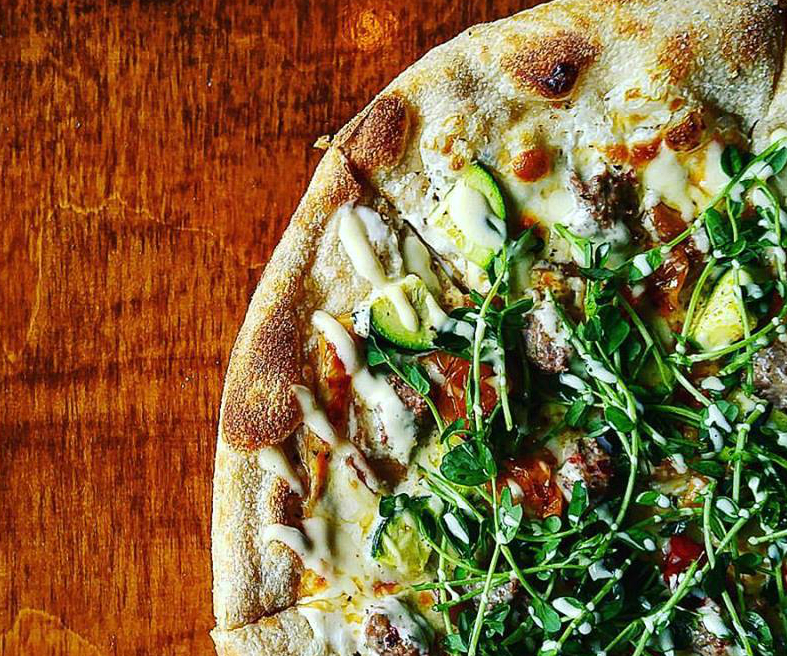 “We’re not a traditional pizza shop,” says Graham Marceau, co-owner of Corduroy Pie Company. Situated along a quiet part of West 16th between Cambie and Oak, this hidden gem is all about pushing the limits when it comes to pizza. “If we want to put corned beef on a pizza, we will. We end up getting into some weird stuff,” Marceau says. “But that being said, most stuff on pizza crust is pretty good.” This sense of innovation and creativity in a restaurant of any kind is a good sign. And it’s always great to stumble upon a pizza place that is, in the case for this writer, so close to home.

The idea for Corduroy Pie Company came from the minds of Rebecca Matthews and chef Figg Downey (the duo behind Corduroy restaurant in Kitsilano); they tapped Marceau to join them for the venture in the hopes that he would bring along his penchant for pizza-making. Marceau’s history includes rolling and baking pizza dough at Pizza Farina as the unofficial sous chef in a small team of three, and helping launch Kerrisdale’s ritzier pizza joint, Bufala (alongside Downey). “I’m more of a beer and pizza and paper napkin kind of guy,” Marceau says cheekily. “I felt like I was ready to do my own thing. This is the third rendition of the dough now, Farina being the first, Bufala being the second, and now here. And I think this is the best version I know how to make.” Corduroy Pie Company opened its doors in 2015, and despite its delicious food, it remains something of an unsung pizza hero in the city.

All of the pies are made to order in a deck-oven that was inherited from previous tenant Rebellious Tomato. There are classic tomato-based pizzas like the Margarita and Five Cheese, along with creamy options like Bacon & Potato and Salami, the latter of which comes with black olives and soppressata. More unique, experimental toppings are also available, and they continue to bring back local customers again and again, according to Marceau. “We do a Lamb Sausage pizza that’s on a white base, that has roasted grapes, charred kale, and roasted onions,” he says, noting that they cure most of the meat on the menu in-house. “We do a Bacon & Brussel Sprout pizza, that’s really popular, too.” Be sure to check out the daily feature as well, and don’t be afraid to add a bit of Nutella to your pie—a Corduroy special.

Because there is no greater marriage than pizza and beer, the restaurant also has a wide selection of local and craft brews. “I like to think of us as a pizza and beer bar,” says Marceau. “Most our regulars come here to see the progression of the pizza menu and the new beers that we put on.” IPAs, sours, and even ciders like Sunday are all here. And Marceau guarantees that customers can always find beer from the Lower Mainland on tap. “We get a lot of the one-off limited beers from different breweries,” he says. It all goes perfectly with the rustic atmosphere, which Marceau describes as a Whistler cabin thanks to the wood-panelled walls and small, intimate tables. “It’s like the Cheers vibe,” he adds colourfully. “We’re typically full most nights, always packed on the weekends, always full of regulars.” Sounds like a mighty fine place to be.