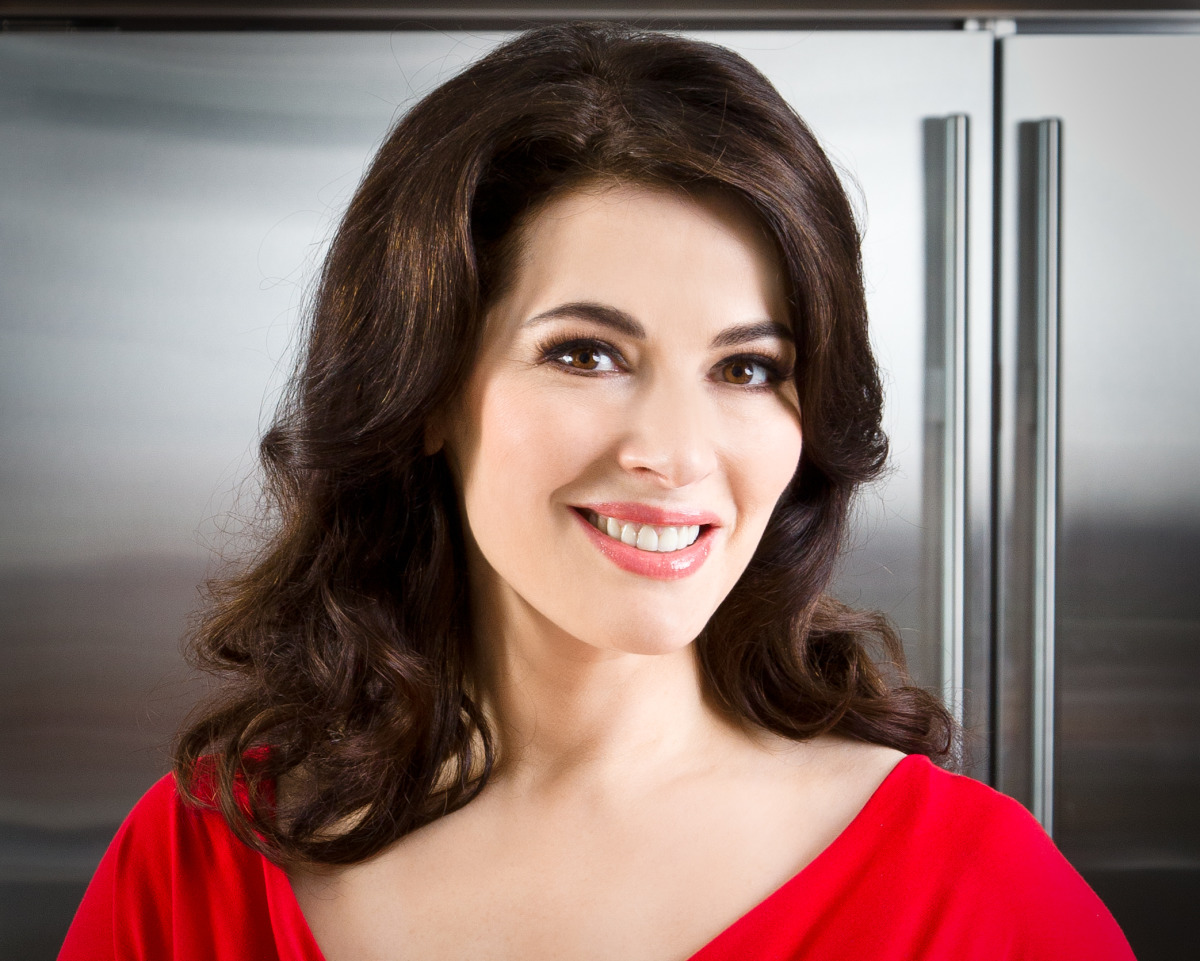 If you’ve read any of Nigella Lawson’s books or watched one of her many cooking shows on TV, you’ll likely want to throw together this fresh summer salad. The celebrated cook shared her recipe with us (below) when she was in town for her 11th book launch two years ago. For more tasty recipes, follow Lawson on Instagram or check out her website. Bon appetit!

Along East Hastings Street, a lineup of foodies builds outside The Gourmet Warehouse. They’re all here to catch a glimpse of the domestic goddess herself—the one who they’ve watched on their television screens effortlessly whip up a decadent lemon pavlova and dish out a hearty bowl of ramen; the one who has comforted them with her quintessential Britishness; the one who has become the champion for the home cook. On this night, Vancouverites are here to honour the woman simply known as Nigella.

The next day, sipping on a Moroccan green tea at the Rosewood Hotel Georgia with her dark hair pushed behind one ear, Nigella Lawson reflects on the many Vancouverites who came to celebrate the release of her 11th cookbook, At My Table (Appetite by Random House). “It was quite frenetic, but very friendly and lovely,” she purrs in her velvety-smooth English accent. She is thrilled to be enjoying the sunshine of the city, especially considering Vancouver is the last stop on her three-week-long book tour of North America. With At My Table, the celebrated A-list food personality once again inspires home cooks with over 100 recipes that are approachable, achievable, and above all, delicious.

For nearly two decades, Lawson has painted a portrait of what domestic bliss looks like. Her chart-topping book How to Be a Domestic Goddess won her the British Book Award for Author of the Year in 2000, which led to 10 global cooking shows, including the Food Network’s Nigella Feasts and the popular series Nigella Bites. She appeared alongside Anthony Bourdain and Ludo Lefebvre as a mentor on the cooking reality show The Taste and served as a special guest judge on MasterChef Australia. But unlike her counterparts in the industry, Lawson is not a chef, and she will be the first to shut down that title association. She has never worked in a professional kitchen, nor has she received professional training. She is an individualist; a hobby cook who has encouraged people to see food in the context of life, using gastronomy as a way to create memories. 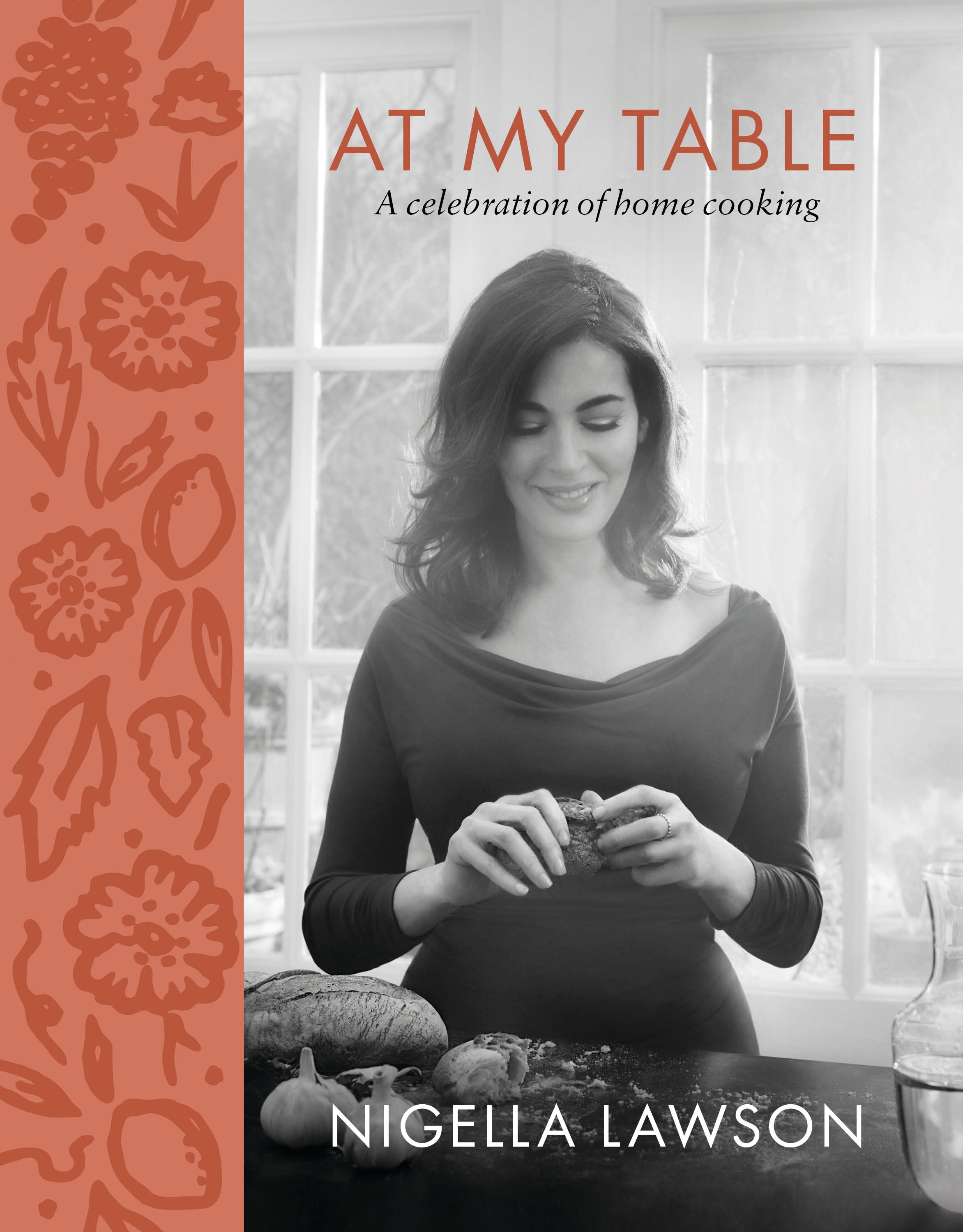 “At My Table” by Nigella Lawson (Appetite by Random House). Photo by Jonathan Lovekin.

“It’s been a part of my life since my earliest childhood, really,” Lawson says, reflecting on her love affair with food. “It feels like a lifelong feature of my personality.” Daughter to one of the most prominent politicians in Margaret Thatcher’s government, Lawson pursued a career in journalism at Oxford University, all the while exploring her culinary passions on the side. Her writing career began at The Sunday Times, where she served as deputy literary editor; then came a job as a freelance journalist, writing food columns for The Spectator, British Vogue, and The New York Times. “Food helped me as a journalist because often I would be cooking while I was working out what I was going to write about that next day,” Lawson reminisces. “And journalism helped me with food because I’m trying to make a case for a recipe.”

At My Table makes food simple, and even fun; it is geared towards anyone who wants to enjoy their time in the kitchen and at the table. “It’s about home food and how I feel about it now after writing about food for so long,” she muses. From garlicky roasted potatoes with oregano and feta to beef and eggplant fatteh, Lawson proves that delightful plates do not always require culinary mastery. She motivates sideline cooks to try new ingredients, get creative, and stay calm even when making a mess in the process. “I’m not into the ‘perfect lives’ things,” she says. “But I am interested in the food and people.”

Although she is mere hours away from boarding a plane back home to London, where she has already ordered lamb chops to be picked up from her butcher that she plans to serve with a preserved lemon and mint sauce, Lawson can’t help but praise Vancouver. “I think whenever you have a city and you have a good mix of cultures, it creates a very lively food scene, and that’s wonderful,” she says. For brunch here, she did exactly as Vancouverites do, taking to Café Medina; she ordered the Harissa “Burger” and gushed over the dish’s two perfectly fried eggs on grilled pita with preserved lemon and harissa spiced beef. Later in the day came Hawksworth’s legendary burger with short ribs, blue cheese, porcini, tomato-fig relish, and arugula. “This is a fantastic city for eating, isn’t it?”

Although there is a certain thrill in dining at new restaurants in the city, Vancouverites who lined up to meet Lawson made it clear that home cooking is also alive and well. As she pens in At My Table, “life is complicated; cooking doesn’t have to be.” Nothing is as precious as a kitchen table, and nothing is as sweet as sharing in its comforts with the closest family and friends.

One of the most gratifying things for a home cook is to scrimmage a meal together out of leftovers. It’s enormously satisfying to ransack the fridge and use up what lies under plastic wrap or is lounging about in the vegetable drawer; it always provides a relaxed, unforced creativity. I certainly would never have thought of using horseradish as a dressing for a tomato salad if I hadn’t wanted to find a way to use up a horseradish root staring beseechingly at me every time I opened the fridge.

While obviously excellent with beef, and do consider the Flat Iron Steak and Roast Top Round on p.190 and p.194 of At My Table respectively, this is wonderful with any oily fish, too.

To eat this at its best, leave time for the tomatoes to steep in the piquant dressing before serving. 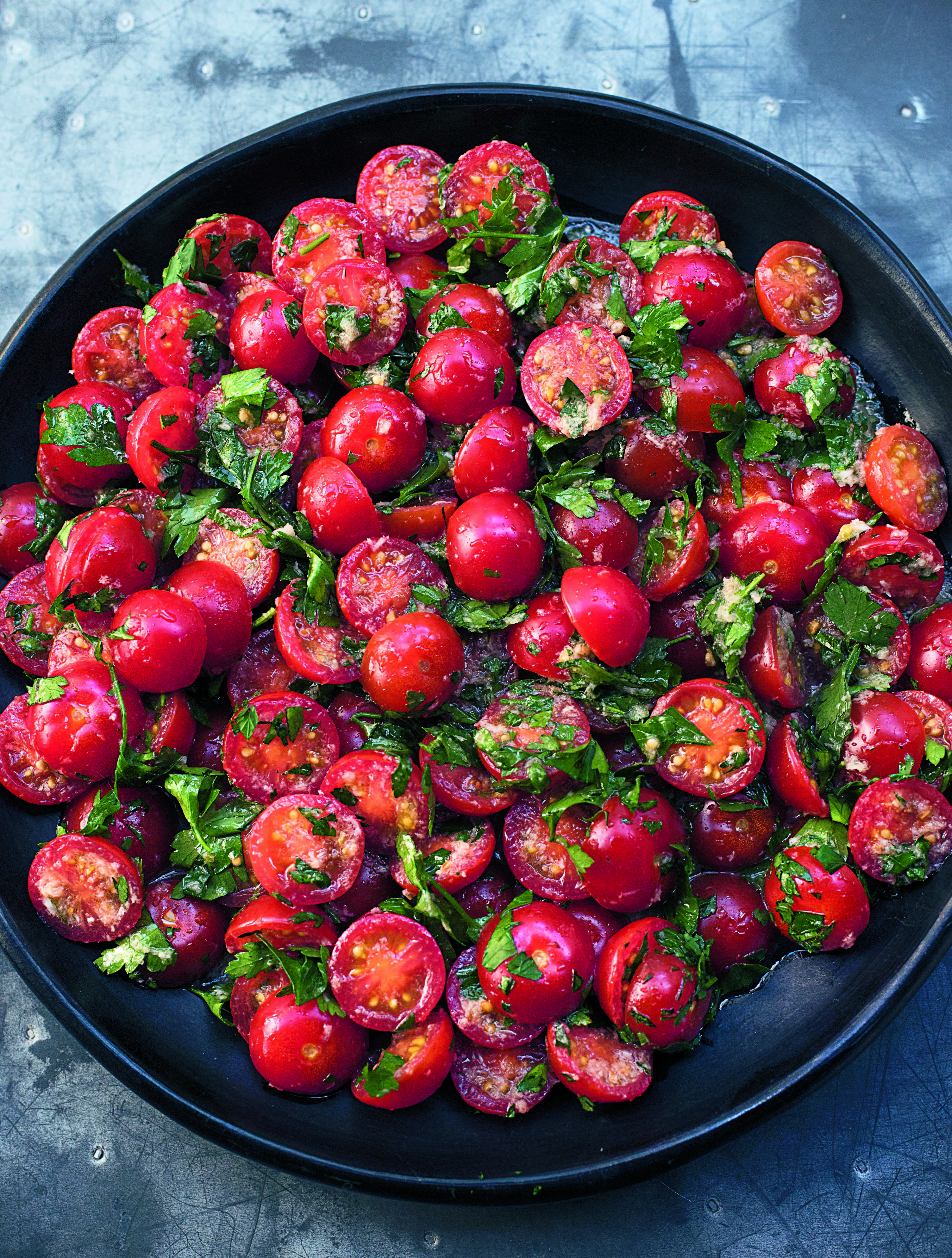 A pinch of sugar

1¼ pounds (3½–4 cups) cherry or grape tomatoes, halved across the equator

Stir the grated horseradish and vinegar together in a small bowl, then add the oil, salt, and sugar and whisk a little with a fork, just to combine. Cover with plastic wrap and let stand for a while, if time permits.

Tumble the halved tomatoes into a large mixing bowl, add the dressing, and mix everything gently but thoroughly together. Cover the bowl with plastic wrap and leave for 30 to 60 minutes, by which time the tomatoes will have given out their fruity juices, which duly mingle with the fierceness of the horseradish.

Toss the tomatoes tenderly in their bowl, then add the parsley leaves and toss again gently. Decant to a smaller serving bowl or a large plate and take to the table.

This story and recipe from our archives were originally published in May 2018. Try more delicious recipes.