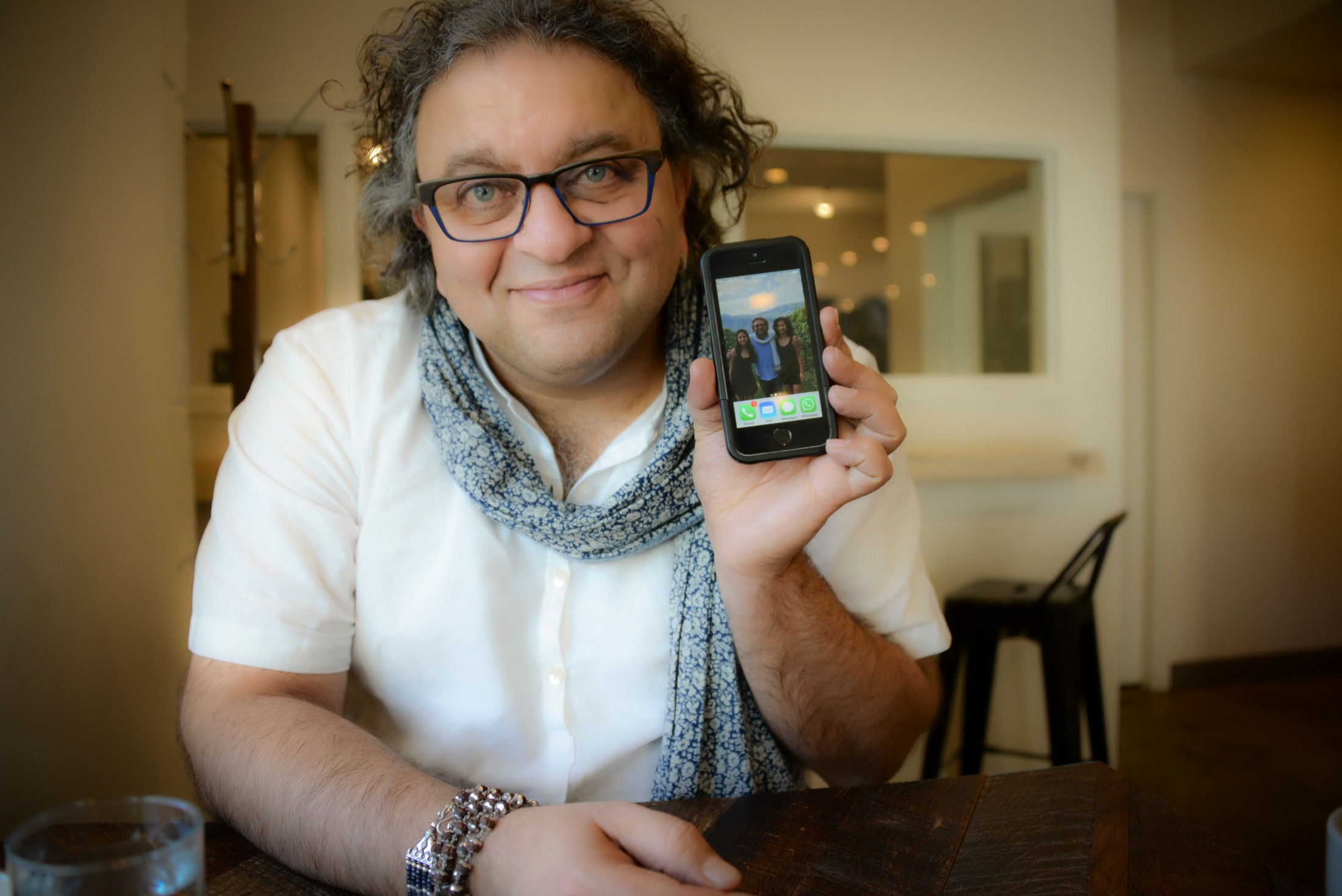 Vikram Vij shares a photo of his daughters, Nanaki and Shanik. Photo by Tessa Lloyd/Courtesy of Douglas & McIntyre.

The following excerpt and photographs are published with permission from Forty Fathers: Men Talk About Parenting by Tessa Lloyd, published by Douglas & McIntyre, © October 2019.

This excerpt is from Vancouver chef and restaurateur Vikram Vij, as told to Tessa Lloyd. Vikram grew up in India, left in 1984 to study hotel management in Austria, and came to Canada in 1989, where he took a job at the Banff Springs Hotel. He opened his first restaurant in Vancouver in 1994. Now 54, Vikram is a widely celebrated chef, sommelier, TV personality and co-author of three bestselling cookbooks. He and his ex-wife Meeru’s restaurants in Vancouver and area include Vij’s and Rangoli. Vikram is also head chef of My Shanti restaurant in South Surrey. Vikram and Meeru have two daughters: Nanaki and Shanik, both in their twenties.

My father had a vision for how and who I was going to be. He held up shining examples of the men he admired: Gandhi, Nelson Mandela, Martin Luther King. He believed that smart men look a certain way, and have military-style haircuts. Of course I realized that the length of their hair had nothing to do with their intelligence; these men had a focus, a calling in life. Yes, I wanted a focus—also called a drishti in Hindi—and wanted my own calling, but they had to be from my own thinking and ideas. The examples my father gave actually pushed me to want the opposite—like really long hair.

The length of my hair became a central feature of the dynamic between us, my need to assert autonomy and his need to demonstrate power and control. “Why does the length of my hair matter so much?” I’d say. “Leave me alone, I’ll make my own mistakes. If I fall down, I’ll wake up some day! You don’t need to mollycoddle me!” Before I left to study hotel management in Austria at the age of nineteen, Dad and I had a huge fight, sparked once again by him wanting me to get a haircut. “If you don’t get it cut, you are not going to Austria,” he said. I got it cut, of course, and was on my way to a new phase of life, to be able to express myself in ways not possible with my father in India.

I’m the one who carries the Vij name, the only son, and I feel lots of pressure. My father would say things like “I know you are going to make us proud one day” (but obviously not right now). I was not an outstanding student, but my people skills were strong. I’ve always loved people, and thankfully I had a subtle cuteness that people enjoyed. People liked me, and I liked them back. So with my dad, even though there was constant bickering, we had a tight bond. The relationship with him was not one of stress, because there was affection and genuine love and lots of respect for each other.

He wanted to provide a level of containment, a white picket fence in my life. “You can’t let a bushtit go wild,” he reasoned. “You have to clip its wings.” For him, my life needed to be a well-manicured garden and for me, it needed to be the jungle. I thought I was a lion and I knew I could survive. He was controlling in many ways. He loved me so deeply, he didn’t want anything to go wrong for me. Even today, he loves me so much that if something were to happen to me, I think he would die.

When I got to Austria, I let my hair grow. On my first visit home to India, after almost a year away, we fought about my hair again. “Go get it cut—your hair. Go, go!” He couldn’t stand it. He was paying for my education, and eventually my respect for him became bigger than my need to demonstrate autonomy. Since then I have avoided creating issues. I have great respect for him and what he’s done for me.

He is influenced by the class system in India. It is terrible, but so normal. This means that he’s very judgemental. I’ve got the name and the fame, he’s very proud of that… “Yes,” he says, “you’re famous, but you haven’t made a shitload of money.” I did not get his conscientiousness. My father spends nothing on himself and knows where every penny goes, whereas I spend lots on myself, and drive the poor man crazy by spending a hundred dollars on a bottle of wine. In his mind I should have amassed great wealth by now.

My first daughter’s birth was the most touching experience of my life. I fed her, I cradled her, I bathed her; her exquisiteness made me weep. I was hesitant, even paranoid that I’d do the wrong thing, but I learned to trust myself. 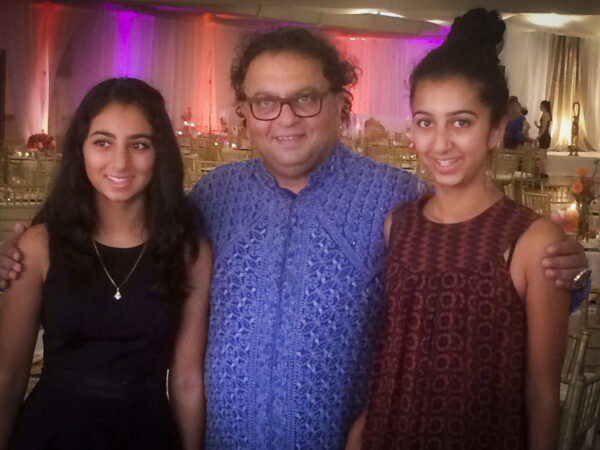 Vikram Vij with his daughters, Nanaki and Shanik. Courtesy of Douglas & McIntyre.

My relationship with my girls is central to who I am. I have truly never doubted myself as a father. I’ve doubted myself as a man, and as a husband, but never as a father. It’s my pillar of strength. I know there are some people in this world who actually don’t like their kids—hard to believe, but someone said it to me the other day. Some of my proudest moments are when people approach them in public and make comments about who I am and what I’ve done, and they’ll say, “He’s just my dad.” That’s truly the only way in which I want to be distinguished, for the reason of who I am to them.

What shadows we can cast as parents. My father had so much power to influence me. When I was little someone came up to him and said, “Oh, your son is so cute,” and he said, “God gave him the looks, but not the brains.” I immediately asked, “Why did you say that, Dad?” He said, “Oh, I was just joking,” but the wound from that small dagger was already there.

I am sure I have done some of those things with my girls, yes, trying to be funny. I think that in some ways I’m the same kind of dad. Many of the qualities my father emphasized are exactly what I want my girls to have, like integrity, honesty, tenacity to work hard, to handle adversity, to not lose it, to remain focused—my dad taught me all that. He thrives on trying to be the best dad; it comes from a very strong place culturally. Despite my resistance and crankiness—the strong father in me? That came from Dad. He also chose the best mum in the world, she is a pillar of strength for him and for us. I truly love my mother as a human being. She is gentle, understanding and most of all, a very good soul.

For me, food is the entrance to the heart. Love of food equals love of life, making good food is the essence of caring. When Meeru and I split up, my girls were so mad at me. They were twelve and fifteen, and bitterly upset with what was happening. They thought it was all my fault. I knew I couldn’t tell them anything different, and it would be so wrong to try. For a long time, they viewed me as the villain.

The adjustment to being single was brutal. It would break my heart to leave them on a Sunday evening, to go back alone to my apartment. I’d stay in the driveway, smoke a cigarette, two, delay the moment when the sad truth of being single would hit me all over again. I’m the first one to admit I screwed up my marriage: it was my ego. Admitting this was my first step to taking a good look at myself in the mirror, and to recovery.

Now Meeru is managing the kitchens at Vij’s and Rangoli and she has been a pillar of strength to the staff and, most importantly, she and I are still very good friends and we respect and talk about our kids with a lot of love and affection. We have been able to reinvent our relationship and yes, we do disagree still on some things, but a lot of times I fully support her and she fully supports me.

My way to handle the difficult times with the girls was to show my love the best way I know how: by making them delicious food, pouring my love into cooking. I was also patient, and I worked hard at rebuilding trust. I kept thinking that eventually, it is my actions that will speak the loudest. Cooking is my language of love. I believe I cooked my way back into my girls’ hearts.

So many people lick their wounds, take offence with their children. I like that my girls challenge me. I hate it when fathers say, “She doesn’t reach out to me.” You are the one who must reach out, it’s your job as a father. I have heard men say they have given up on their child: “Well, I tried five times to call her, and she never phoned me back.” My response is, “Well, try fifty times, try one hundred and fifty times. Don’t give up.” I send text messages to my girls every morning. I call, I go out of my way to connect wherever and whenever. I will be the first one to reach out. I am so passionate about them, and our love.

My focus is my fatherhood, not my cooking, not my restaurant, not my TV shows, not that stuff. I want to be remembered as Vikram Vij the great father. I want my kids to say, “My dad’s crazy, my dad’s nuts, but fuck, I love him.”

Show your feelings and be open with your children. Listen to them and ask how they feel. I wear my heart on the outside. I cry at movies, weddings. I cry all the time, I sob, I melt like butter. No one has to guess what I am feeling. Except I can’t show my father, or tell him how I am feeling; I’ve never been able to do that. And there are things he can’t talk to me about or ask me, like whether I have a girlfriend, whether I am having sex. Our relationship is wired differently, but now I accept him. I can’t change him. I don’t want to change him.

I may be emotional, but I am practical and bring full awareness to my role as a father. I am guided by a conscious, methodical approach and know that I am planting seeds for the future. Being a dad is the best thing I ever did.