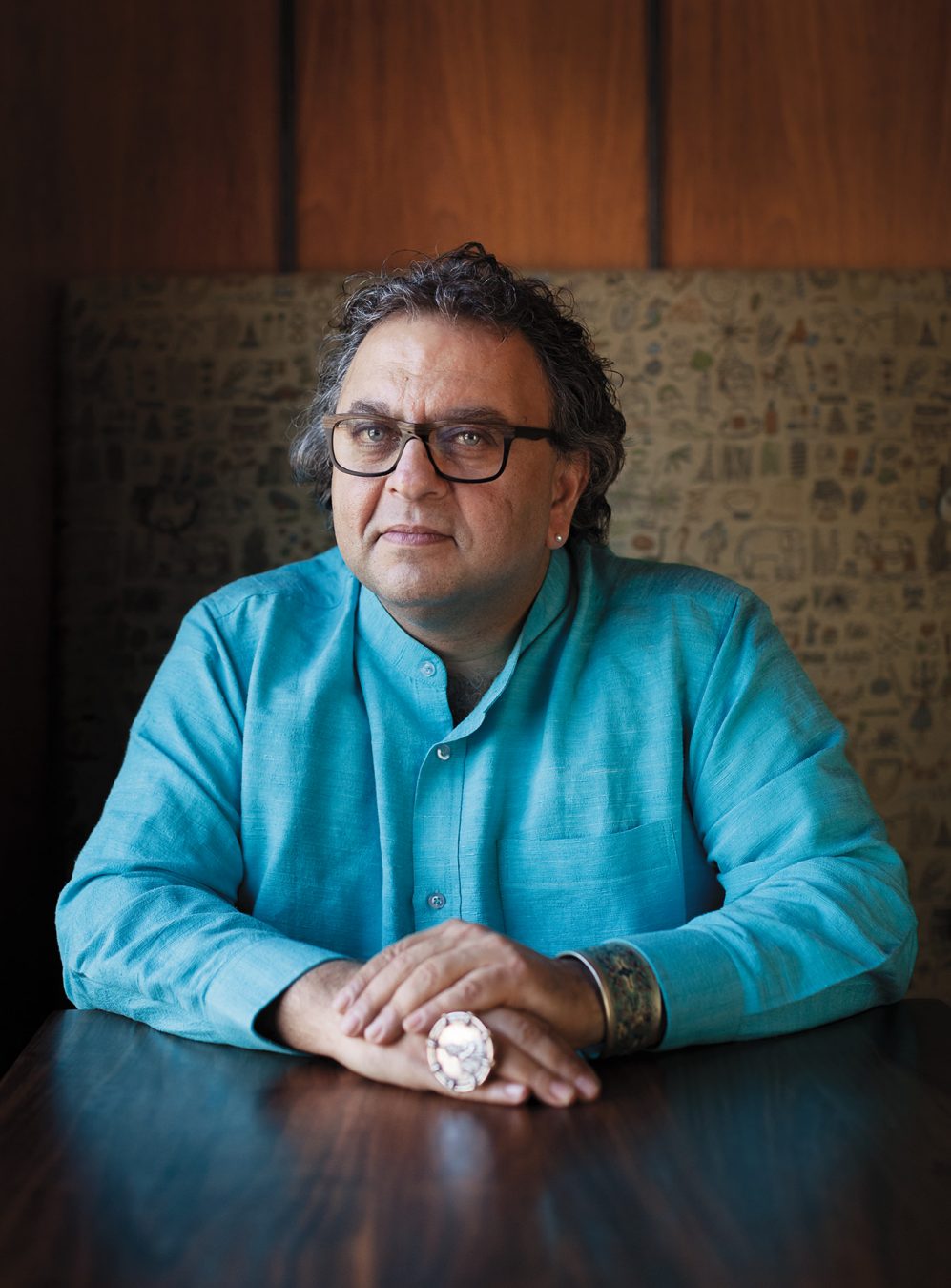 Sitting down to dine with Vikram Vij is a charming exercise in the sociology of great restaurants, in which the food, uniformly great, is only part of an elaborate equation that includes décor and, most importantly, an environment in which people inevitably feel good about themselves. He is never still, never unaware of what is transpiring around him. It is hospitality and showmanship, and it comes naturally to Vij.

He opened his self-named restaurant, just off Granville and Broadway, in 1994, and Rangoli in 2004. The Vij’s Railway Express food truck, My Shanti in South Surrey’s Morgan Crossing, and, finally, the new flagship Vij’s on Cambie (the South Granville location remains open for private events), are all part of his tightly run empire. “This new place is about legacy,” he says, as he walks around the upper floor patio. “When I am all done, I think I might simply give it to the City of Vancouver, let it be some kind of landmark, and a token of gratitude for what the city and its people have done for me.”

There is one lady (two on busy nights) whose sole job is to knead naan dough with a small stone, and then slap it against the 700-degree inner wall heat of a concrete oven.

The new Vij’s exterior is a facsimile of a traditional Indian lantern and, after nightfall, when the patio is alight, the whole structure glows. The lounge ceiling inside is bedecked with thousands of tiny clay chai cups, made in India specifically for the restaurant. “I love the space in the lounge,” he says. “We almost never have to ask people to wait outside for a table anymore.” One of the early distinctions at the original Vij’s was the inevitable wait in line. Rumour has it such folks as Martha Stewart had to wait, and gladly. “Yes, she was quite gracious,” says Vij. “But we cannot very well make any exception. The whole point is that in Mumbai, where I grew up, with enough money you could buy literally anything. To me, coming to Canada, I wanted make a statement that money here cannot buy everything, and a seat in my restaurant has always been something you had to wait your turn for.” That has come to include Prime Minister Justin Trudeau (and his late father Pierre), whom Vij counts as a friend.

For Vij, with his classical French training and some years spent at Bishop’s restaurant, his is still “Indian food, both in inspiration and in technique.” There is one lady (two on busy nights) whose sole job is to knead naan dough with a small stone, and then slap it against the 700-degree inner wall heat of a concrete oven, where it sticks, bubbles, browns, does not quite blacken, and is scraped adroitly off, receiving a little olive oil before being placed in a basket which is immediately whisked away to a table. The entire process is barely a minute’s duration. “We make the dough balls in the morning, and they sit until we need them,” says Vij. “Back in my little village in India, every house on the street would make their own dough, but then bring it to the one gentleman on the street who owned an oven, exactly like this one. In exchange for two balls of dough, he would cook up as much naan as you needed for the day.”

The famous lamb popsicles come with a story. “I served them at a dinner one time,” he recalls. “They were not yet on the Vij’s menu. David Scholefield looked at them, and picked one up with his fingers to eat. I always intended that was the way people should eat them, not using a knife and fork on such a delicate, small piece of meat on bone. I said, ‘It looks like you are eating a popsicle’. And it stuck.” They are something of a local legend, but not the only memorable thing that Vij’s serves. Garam marsala sautéed portobello mushrooms in porcini cream curry; spicy cashews with paneer and ghee; kalonji sautéed vegetables on coconut curried brown rice with black chickpea pilaf; Rajasthani-style spicy goat with mildly-spiced vegetables; lemon-ghee marinated grilled chicken breast with roasted garlic and fenugreek seed-lime leaf curry. With manager and wine director Mike Bernardo to guide you to the right grüner veltliner, a cold beer, or one of Jay Jones’s magical cocktails, the time will pass quickly.

Bestselling cookbooks, a role as judge on Top Chef Canada and Chopped Canada, and being on Dragons’ Den for a year make him a public figure people want to shake hands with. “I enjoyed the Den,” he says, smiles. “But it took far too much time—time I needed to invest here at this new restaurant.” Vij had some goals when he opened his first place, and it is fair to say they have been largely achieved. But he still loves coming to work each day. His smile and wave at the door are but the flourishes of a splendid performance, so resonant, in fact, that long after the restaurant closes for the night, still it glows.