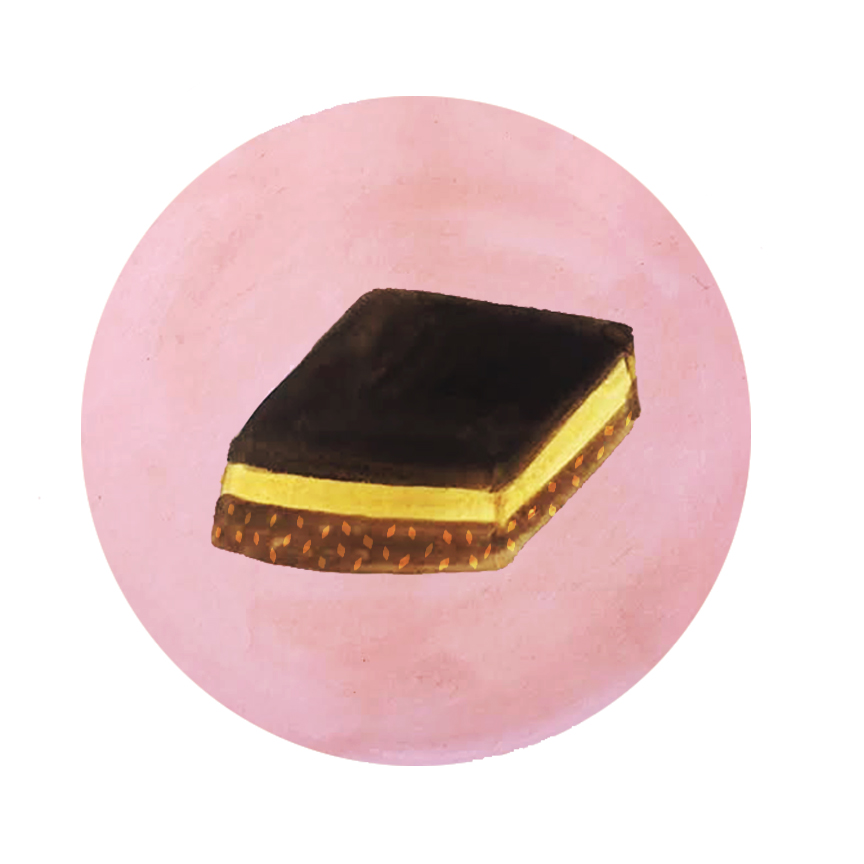 In the basement of a Nanaimo church, ladies in lace-fringed aprons are hard at work preparing a meal to dazzle the community. One woman is carefully following a recipe for unbaked chocolate cake, clipped out of the Vancouver Sun, when she decides to try something new. She whips up a custard icing, spreads it over the cake, adds a final layer of chocolate, and chills the creation in the refrigerator. When she pulls it out, she slices off the round edges to make perfect squares and shares the sweet scraps with her fellow members of the Nanaimo Hospital Auxiliary. Delicious. The housewives immediately request the recipe and soon the squares, which became known as Nanaimo bars, were adorning the doilies of dessert trays across town.

No one is sure exactly how, when, or by whom the Nanaimo bar was created, but this is the scenario pictured by Lenore Newman, who researched the layered history of the layered dessert that has come to define its namesake Vancouver Island community. “A lot of food history gets lost because it’s so overwhelmingly oral,” says Newman, who is Canada Research Chair in Food Security and the Environment at the University of the Fraser Valley. “I think there’s a real need to preserve these stories, because they can tell us a lot about who we were and who we are.”

Newman chased down rumours, and combed through community cookbooks as well as recipes printed in Edith Adams’s Vancouver Sun columns from 1930 to 1960. Adams was a fictional homemaker who doled out advice and ran a popular daily recipe competition. In columns from 1947 and 1948, Newman found the recipe for the coconut-graham cracker base. The first known recipe for Nanaimo bars was printed in the 1952 Women’s Auxiliary of the Nanaimo Hospital Cookbook, but under the name “chocolate square.” A year later, the recipe appeared in the Sun as the “London fog bar,” with “Nanaimo bar” listed as an alternate name. Newman believes the recipe was created by a member of the auxiliary and named by Edith Adams.

“There are all these other mysterious stories that Nanaimo bars came from here, there, and everywhere, but there’s absolutely no evidence of that,” says Newman, adding that the dessert is clearly a product of its time; when commercial ingredients came on the market, there was a move away from formal sit-down dinners in favour of cocktail parties with finger foods such as the Nanaimo bar, and women had more leisure time. “It was almost a luxury or a status symbol to have a wife who made fiddly little squares.”

Nanaimo Museum interpretation curator Aimee Greenaway says the 1952 cookbook, which is on display at the museum, was a fundraiser for the auxiliary, and the history speaks to the role of 1950s Nanaimo housewives. “Women were in the home, but they were also working to creatively support important causes in the community,” she says. When tastes changed and other 1950s dainties started to disappear from church dinners and community potlucks, the Nanaimo bar refused to relinquish its place on the platter. “It has survived because it’s named the Nanaimo bar,” says Newman, who grew up eating the dessert on special occasions. “It’s the only thing that makes any sense.”

The bar got a big boost during Expo 86 in Vancouver, when Nanaimo held a recipe contest and trotted out a mascot named Nanaimo Barney. A recipe for the confection was also included in a commemorative cookbook curated by The Lazy Gourmet, the Vancouver catering company believed to be the first to commercially produce the bars. As such, the Nanaimo bar was introduced to the world.

Today, Greenaway says eating a Nanaimo bar in the city is on the bucket list of many visitors, and they’re certainly not starved for choices. Tourists can follow the Nanaimo Bar Trail and visit nearly 40 businesses that boast some version of the square. There are traditional takes, of course, but there are also Nanaimo bar martinis, cheesecakes, and spring rolls. You can even get a Nanaimo bar pedicure at a local spa. The little square has also gone mainstream, and can be found on BC Ferries ships, in giant slabs at Costco, and at Canadian-themed eateries in London, New York, and Laos. “The Nanaimo bar is a bit like a Kardashian: it’s famous for being famous,” Newman says. “And that self-perpetuates, and I think it will continue to do so.”

From the Archives: This article was originally published on August 7, 2017. Discover more food stories.