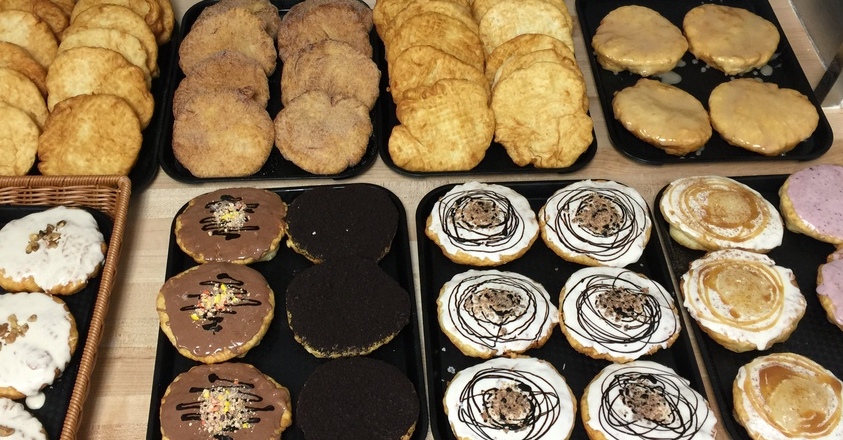 “Don’t panic, we have bannock.”

Charming, humorous, and deliciously witty—it’s become one of the Okanagan’s most recognizable taglines over the years, shooting Kekuli Cafe to local stardom.

Bannock, an Aboriginal bread known for its simple taste and versatility, is the heart and soul of Kekuli. And of course, it’s nothing to panic over—because it’s delightfully tasty.

Situated in West Kelowna, Kekuli Cafe is the community’s charming hidden gem. Wife-and-husband owners Sharon Bond-Hogg and Darren Hogg have been running the cafe since 2009, enchanting locals and visitors alike with their fried yet fluffy breads and a menu that celebrates contemporary Indigenous cuisine.

Originally served at Pow Wows and celebrations, bannock—or frybread, as some call it—has long played the role of survival bread. During the historical fur trade days of the 17th and 18th centuries, it is said that the Scottish introduced quick bread to members of the local First Nations, using oats and cast-iron pans. Once learned, the Indigenous people did it their way, using ingredients like ground corn, wheat, roots, and berries from the earth, and a pit fire to bake. “It’s not a gathering unless you’re breaking bannock,” reads a sign inside Kekuli. Customers who now find themselves breaking bannock are digging into a contemporary yet top-secret recipe.

“People are so excited when they walk in,” Bond-Hogg, a member of the Nooaitch First Nation in Merritt, says on a beautiful autumn morning in West Kelowna. “They’re ecstatic that they’re getting something they can’t get anywhere else.” She’s right—a bannock restaurant isn’t a culinary hotspot one often sees. Bond-Hogg remembers Dolly Watts, the woman who established Liliget Feast House, a restaurant dedicated to First Nations fare on Davie Street in Vancouver. The restaurant closed its doors in 2006, but Bond-Hogg still lists Watts as an inspiration: “It would be amazing to have checked that out and seen how she did things at the time.” Now, Bond-Hogg is putting bannock back on the map.

The menu here is playful. Sitting next to traditional bannock are other flavours, including apple spice, maple walnut, and caramel macchiato. Those looking for a modern twist on bannock are sure to love the cafe’s signature Pow Wow Frybread Indian Taco: a beautiful combination of Indigenous and Mexican flavours, including a homemade pebre sauce. To wash it all down, a refreshing lavender lemonade will do the trick.

For Bong-Hogg, the dream of running her own business started in the concession stand at a local car wash. Filling up the bellies of all those who stopped by with fresh, homemade bannock quickly led her to open her West Kelowna shop located just off Highway 97 on Louie Drive. Then, in her hometown of Merritt, a second location was established. Now, she is closing the doors of the original cafe in West Kelowna and moving down the street onto Carrington Road, which is set to open in January 2018.

“We’re growing every day,” Bong-Hogg, a recent winner of the B.C. Aboriginal Business of the Year award, says. “When we first opened, there was no one like us.” She proudly notes how there are now nearly 25 First Nations restaurants across Canada, and hopes her leadership and support has encouraged others to follow their business goals: “Now, someone who wants to open [a business] up today can go, ‘Oh, they’re doing that? I can do that, too.’”

Still hungry? View our latest in Food and Drink.