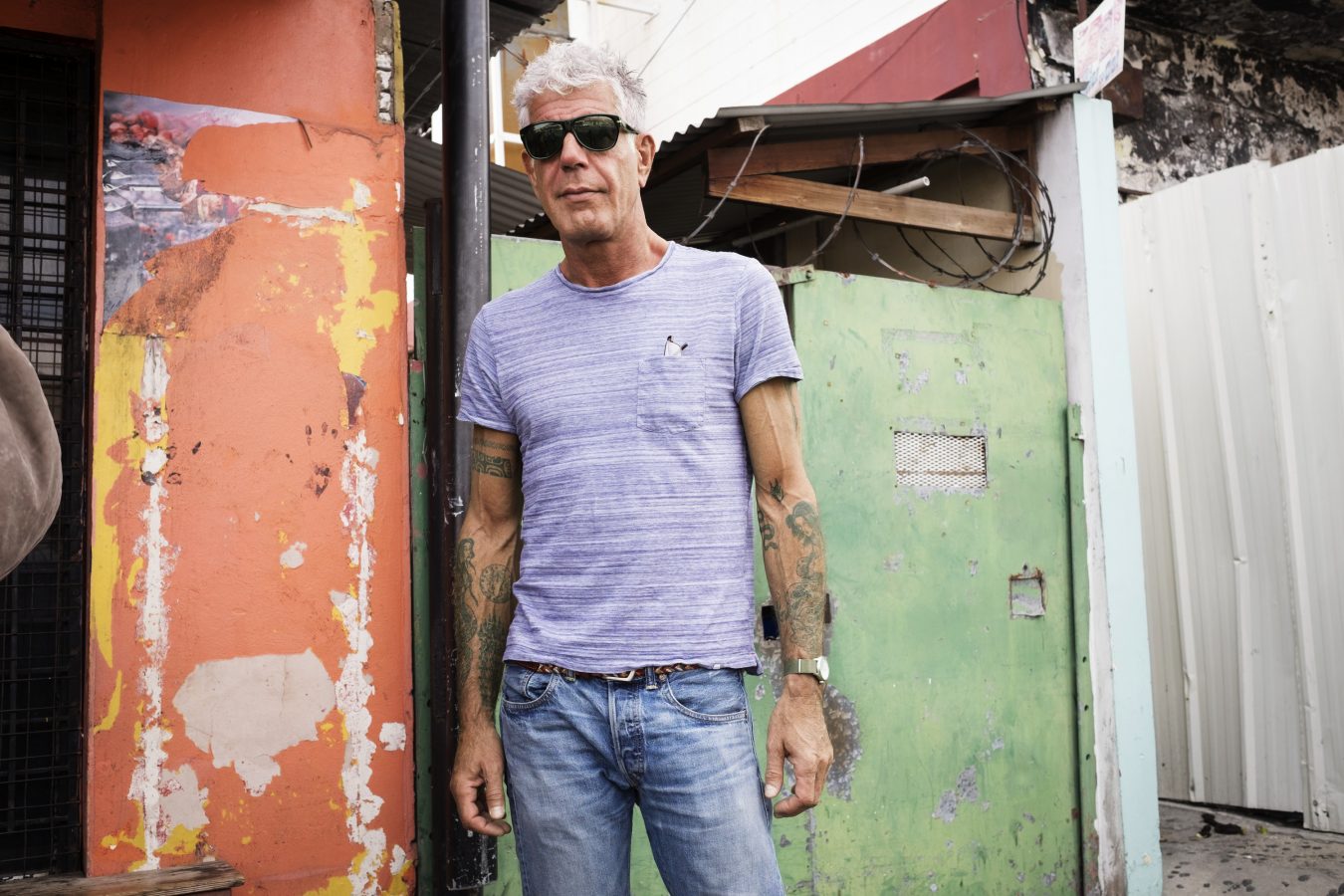 Anthony Bourdain in Trinidad on the set of CNN’s Parts Unknown. Photo courtesy of CNN.

This story from our archives originally ran on June 8, 2018, with this Editor’s note: It was announced today that chef and television host Anthony Bourdain has died at age 61; CNN reports the cause of death was suicide. The following story was scheduled to be published in MONTECRISTO’s Winter 2018 issue, released in December, but in light of this news, we have instead decided to post it here in memoriam. Because as Bourdain taught us by taking his show to remote corners of the world, one’s story is best told in his own words. If you are thinking about suicide or self-harm, please call the Crisis Intervention and Suicide Prevention Centre of British Columbia at 1-866-661-3311.

Hopscotching across the globe is not for the faint of heart, but Anthony Bourdain makes it look easy. With a high-octane career that involves discovering interesting people and culinary experiences in the world’s far-flung destinations, Bourdain is undoubtedly an enthusiastic advocate for adventure. Even when this chef-turned-writer-turned-television-host slows down for a moment, his mind tends to buzz.

Catching up with Bourdain earlier feels like a moment in the eye of the hurricane. He has just flown to the Cayman Islands from Berlin, where he was taping an episode of his hit CNN series Parts Unknown. Fortunately, today he is found in a quiet conference room—but just outside the door is loud music and raucous partying at The Ritz Carlton Grand Cayman’s swimming pool. Bourdain is here for the 2018 Cayman Cookout, an annual culinary event presented by his good buddy and award-winning chef Eric Ripert. Although the two are famously known for ribbing each other on some episodes of Parts Unknown, it’s obvious that they are the closest of friends. In fact, one of the festival’s most laughter-filled events was the duo’s cooking demo, aptly named The Adventures of Eric and Tony.

Not surprisingly, one of the questions that Bourdain gets asked frequently is about his favourite places to visit. Countries that have impressed him read like a lengthy grocery list. After a brief pause, he breathlessly rattles off a multitude of destinations: “Oman is very surprising. I think that’s an incredible country…as is Senegal,” he reflects. “I always encourage people to go to Beirut; I’ve been there many times and I think no one should hesitate to go. Uruguay is awesome. And I just got back from Bhutan, and that was a pretty extraordinary adventure.”

He mentions that Beirut had an especially powerful impact on him in 2006, when he and his film crew experienced firsthand the city’s widespread devastation and violence. “I felt shame, anger, sorrow—and after that show, all of my shows changed,” he says. “From that point on, I said I would never make a show again where I’m just shoving food in my face in countries where they are struggling to eat, and while there is an elephant in the room.” That decision has only made his shows more engaging, as viewers faithfully tune in to watch a tattooed and often goofy Bourdain discover not only delicious dishes, but also meaningful culture and human connection.

Parts Unknown, however, is only keeping Bourdain busy, well, part of the time. He is also the executive producer on Christiane Amanpour’s CNN show, Sex and Love Around the World, and is producing a new documentary series focused on Detroit in the 1960s. In addition, he is the executive producer for the PBS series Mind of a Chef, and host of The Balvenie’s Rawcraft with Anthony Bourdain, an online series celebrating artisans around the world.

Of course, while Bourdain’s passion for exploration is obvious, the nomadic life does have its disadvantages. “I love my job, but there is a price to pay for travelling so much,” he admits. “I think it’s not hard for anyone to imagine that travel does have its downside. I’m away always, and I’m moving always. It’s a weird place. I’m very grateful, but it’s a strange and unnatural thing to be travelling for 17 years.” At the wrap of each Parts Unknown season, when his constant flying is placed in a temporary holding pattern, Bourdain is finally able to take a breath, and he welcomes the opportunity to lay low. “I try to spend the summer doing absolutely nothing. And I especially enjoy the time with my daughter,” he says. “When I’m in New York, I try to do as little as possible.”

He prefers, in those off days, to go where no one knows his name or cares who he is (undoubtedly, though, it’s a challenge to find such a place). “When I’m not working, I don’t want to see a lot of airports. I am not packing up and going somewhere exotic,” Bourdain admits. “Sometimes I go to The Hamptons—the least fashionable one. I don’t need much, just some place to cook and a view. And I don’t go to any restaurants where I have to wear shoes. To me, there is a definite relationship between happiness and how often you have to wear shoes.” Lucky for him, he’s currently just steps from the beach.

More from Food and Drink.