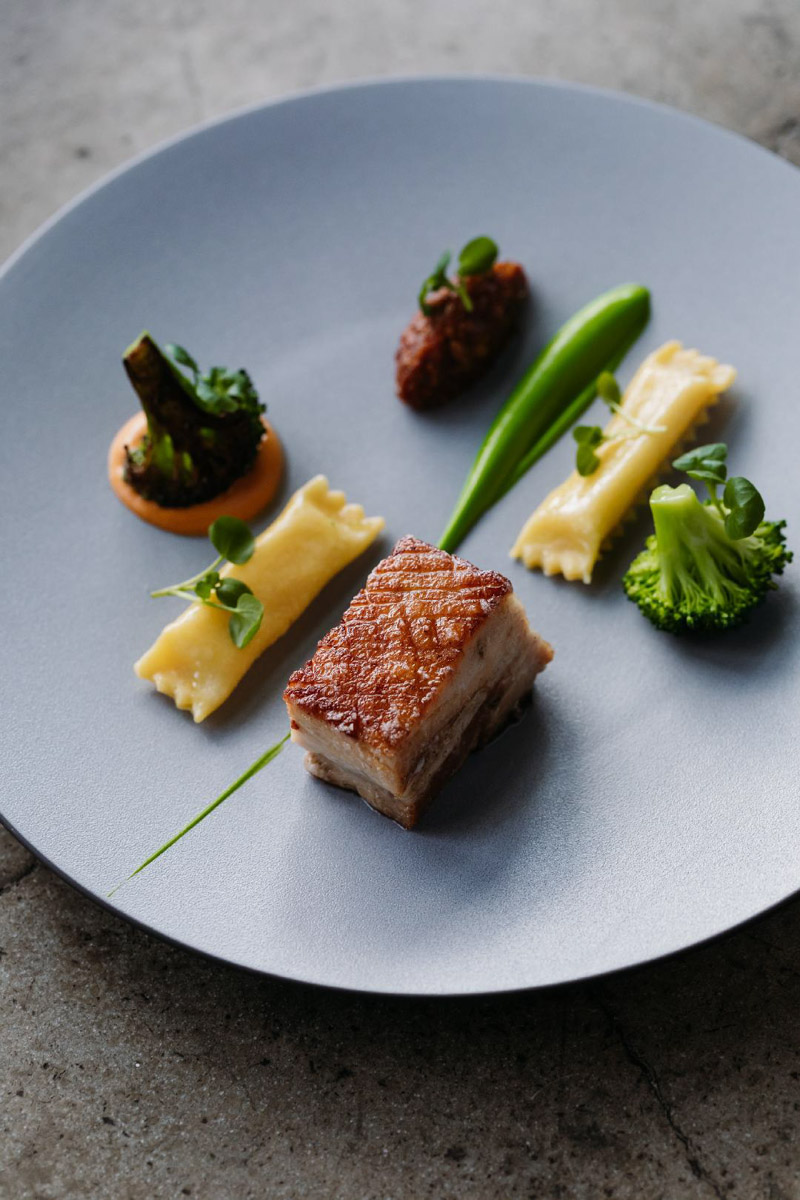 The tasting menu at AnnaLena is a pleasurable surrender to the expert hands of the kitchen. The six-courses, which change weekly, set out on a journey from a decadent opener, such as fried chicken with pickled cucumber, dill, and horseradish emulsion, and ending at a luxurious dessert, such as warm chocolate mousse with puffed barley, passion fruit caramel, and malt ice cream. On the way, you’ll enjoy a refreshing salad, a broth with garlic torn bread, a dish of handmade pasta, and a beautifully crafted main course. The choreography of the meal is impeccable.

Prior to the pandemic, AnnaLena offered both a tasting menu and à la carte. However, staring down the barrel of uncertainty, the restaurant leaped into the unknown. “Would Vancouver accept tasting menus only, we didn’t know. But we didn’t know the future of anything anyway, so why not just do what we wanted to do?’” says owner and executive chef Mike Robbins.

Robbins cares passionately about the integrity of what he creates. While it was great to accommodate every palate, Robbins knew the kitchen was capable of more. “If you do one thing, you can do it better than two things. Naturally, that’s the way it works. So, by us focusing on one thing, we were able to achieve higher standards,” he says.

Robbins feels a single choice makes for a better meal. Left to their own devices, diners can understandably load up on dishes like pasta, to the exclusion of other courses. Robbins wants them to leave the restaurant satisfied, not stuffed. “When you can write your own tasting menu, you can create what you think is the right amount of food, the right amount of vegetables, the right amount of starches. We take you through all the things that we think make a tasting menu great,” he says.

While the arc of AnnaLena’s tasting menu remains consistent, the kitchen draws on whimsy and what’s in season for specifics. One week they’ll serve braised pork belly with broccoli, bacon jam, and romesco sauce as a main, and the next it’ll be dry aged duck breast with Tokyo turnips, mushrooms, glazed duck sausage, and madeira jus. With a couple days’ notice, they can dream up something that suits particular dietary needs. 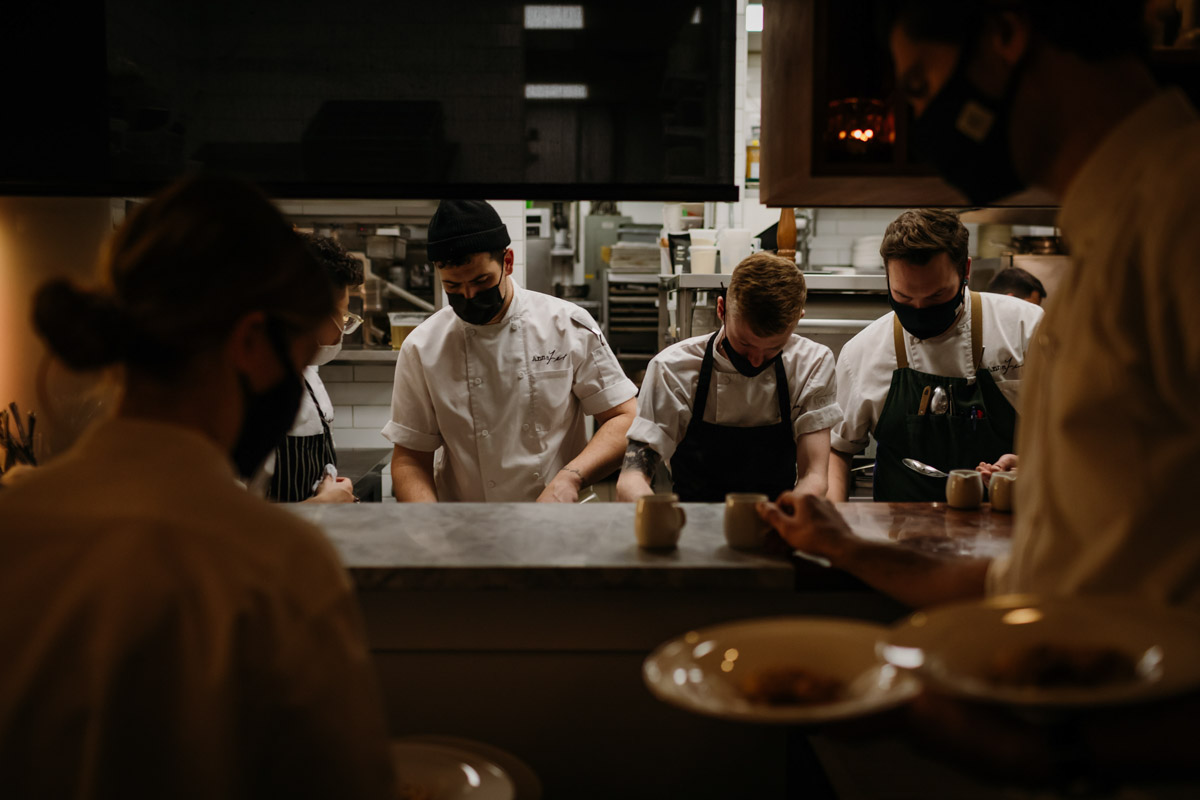 The kitchen at AnnaLena. Photo by Allison Kuhl.

A fluid menu also makes it easier to respond to an increasingly unpredictable supply chain. “Our ability to write menus based off of what is available is important because [suppliers] might just say, ‘The pork truck is stuck at the border, so there’s nothing available,’” says Robbins. By staying flexible, the restaurant avoids diners demanding favourite dishes, and the kitchen can control food costs when certain ingredients become scarce.

A weekly tasting menu adds variety for both diners and restaurant staff. “It can be boring for a cook who does the same dishes for three months straight,” Robbins says. There’s also less stress since nobody is overwhelmed with a sudden rush of orders for a certain dish.

Jean-Christophe Poirier, chef and owner of St. Lawrence Restaurant, raves about his own switch to multi-course meals. Already frustrated with no-shows and last-minute cancellations, Poirier saw the pandemic as an opportunity to consider a different business model.

“Before, we were à la carte, and I was trying to find a way with the restrictions to make it work for us without losing our integrity, vision, and identity,” he says. He opted for a table d’hôte, which gives diners options for each of three courses. The kitchen changes the menu every couple of months, with diners purchasing tickets in advance. That way, customers know what they’ll be getting before they arrive, and the restaurant minimizes uncertainties. “I think it’s a more civilized program for everyone,” he says.

To give each table d’hôte coherence, Poirier selects a theme and then a corresponding menu. A “Cabane à Sucre” menu, celebrating maple syrup and rustic Quebecois fare, such as split pea soup and venison tourtière, wraps up at the end of February. Coming up for March and April is a “Brasserie Parisienne” themed with bison tartare with gherkins, capers, egg yolk and chips; duck confit with a warm salad of potatoes, escarole, green beans, and foie gras; and rice pudding with salted caramel and pecans. 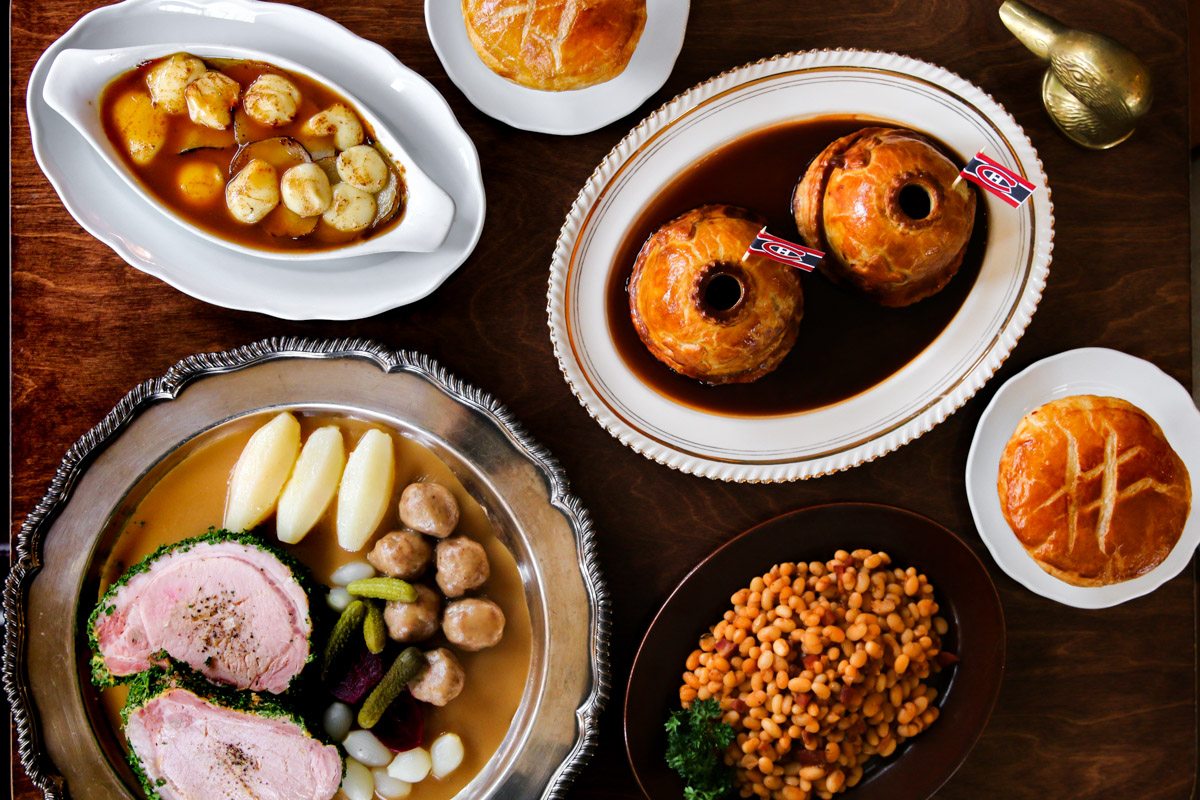 While Poirier likes to give a few choices to customers, the table d’hôte showcases the creative judgement of the cooks. “We can truly have the freedom in the kitchen to represent what we want to serve,” he says. The theme acts as a frame around a blank canvas for dishes that work in delicious concert with one another. “I need to look at it like a puzzle. If I’m a customer, and I decide to order this starter, would it match this choice for the main course? Would it follow up nicely with this dessert?” he says.

The streamlined menu reduces waste and allows the kitchen to purchase higher quality ingredients. And with diners investing in a ticket ahead of time, they value the meal more. Wine pairings, service, and even lighting and music make the courses unfold seamlessly. “People are craving something different, trusting that we at St. Lawrence will deliver and make it an unforgettable experience every time,” Poirier says.

Some regulars express nostalgia for regular menu items from the past, but for the most part, diners like the shift. Poirier makes it clear the table d’hôte menus are here to stay. “Do people expect us to go back to à la carte, or do we want to? I don’t think we’re going back to what it was in the beginning. I think this is the plan moving forward for us,” he says.