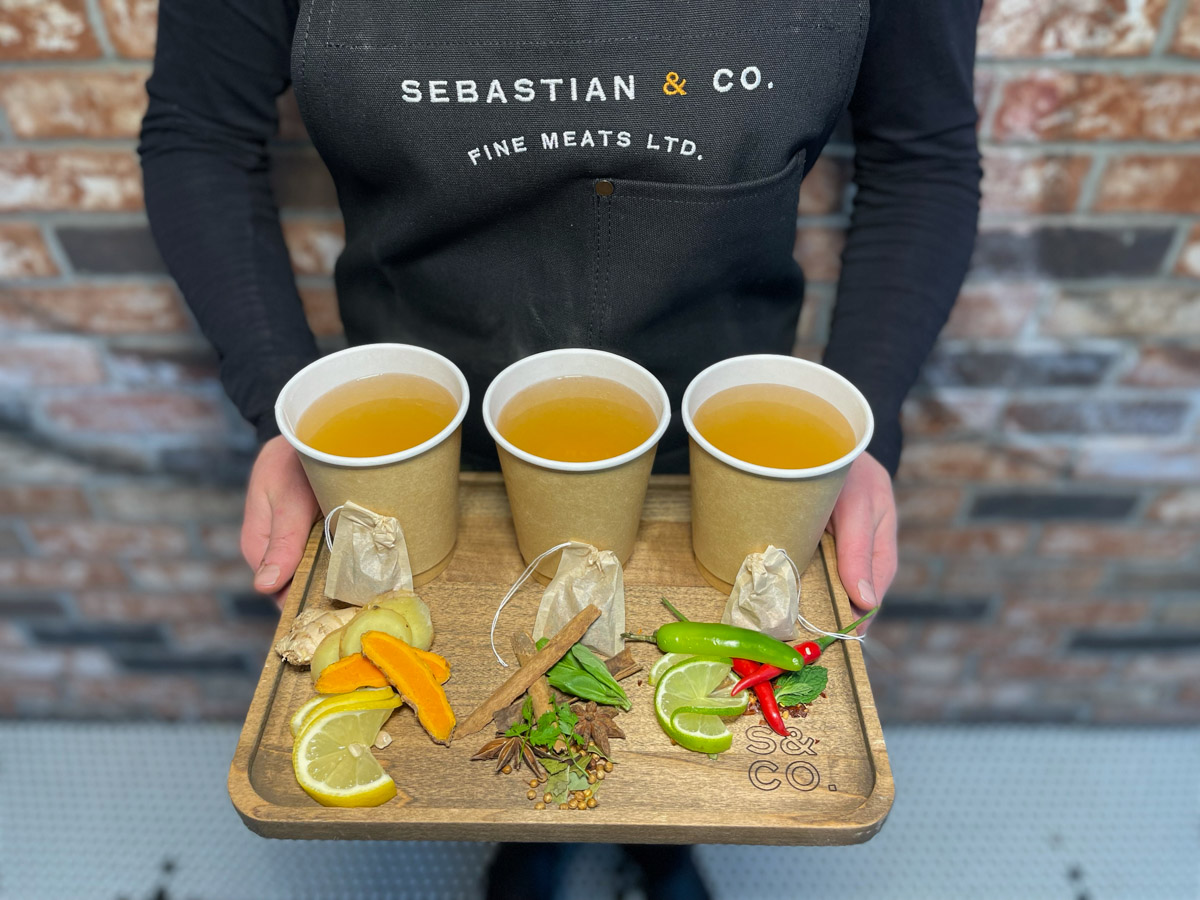 From the bone broth bar at Sebastian & Co Fine Meats.

I visit my local butcher in search of bones. The sales clerk nods when I explain what I want. He disappears into the cold storage area and emerges carrying large femur bones. I hear the sound of a loud buzzing as he saws them into multiple pieces, the marrow now exposed on the sides.

I cradle my bag of bones as I head home, conscious of their weight in my arms. My connection to the bones feels intimate, as if I’m carrying something precious a loved one has given me. Once home, I decide to keep my first attempt simple. I carefully place the bones in my slow cooker, add water along with some sea salt, and then leave it to cook at low heat for a long, long time. It’s presence on my counter, simmering throughout the day, is comforting.

I’m embarking on this experiment with bone broth out of curiosity. In the media, I’ve read of celebrities, such as Kylie Jenner and Halle Berry, claiming they drink it regularly, touting it as a miraculous concoction. Here, in Vancouver, many establishments serve it to customers eager to consume the elixir. I’m skeptical, but want to find out more.

Despite the recent surge in interest, bone broth has a long history in ancient medicinal practices. I talk to Dr. Maryam Mahanian, a registered acupuncturist and doctor of Traditional Chinese Medicine (TCM), who recommends it frequently to patients as part of a health regimen. “In China, people have been consuming bone broth as a medicinal food for thousands of years. And it continues to be prescribed by most Chinese medicine practitioners. That alone gives an idea of how powerful it can be,” she says. 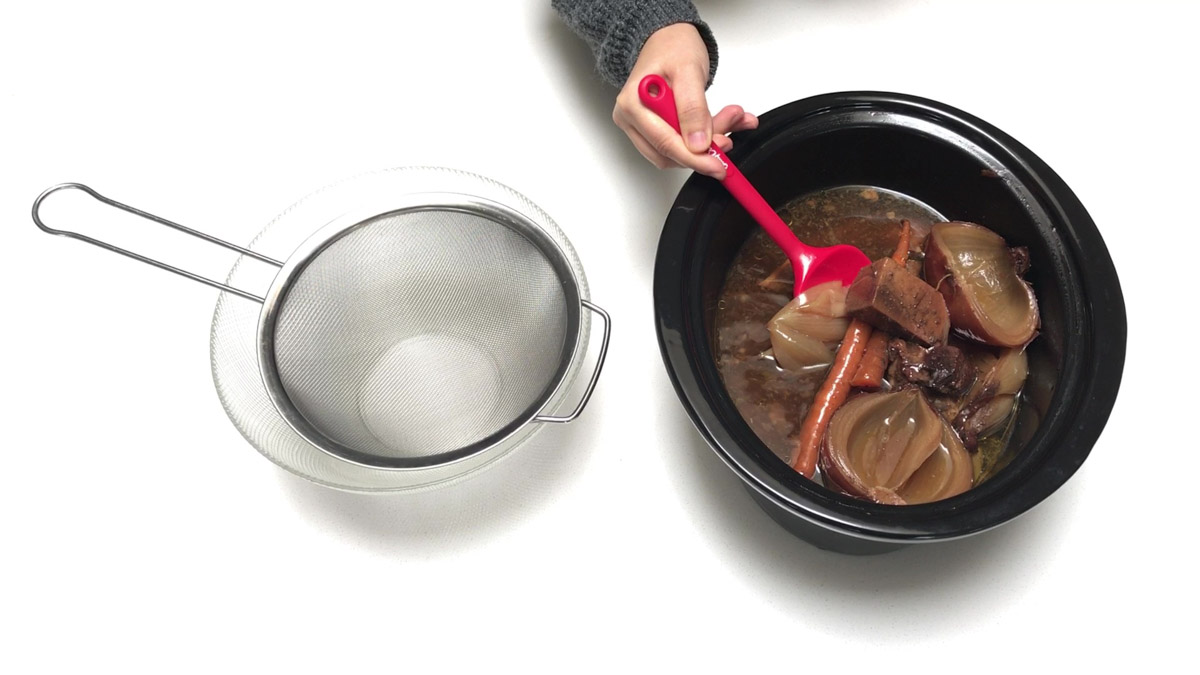 Mahanian explains that bone broth is distinct from stock due to the length of cooking time. Whereas a stock could take as little as a couple hours to make, bone broth requires simmering for between 16 to 24 hours. “If you have it on low heat for such a long period of time, the marrow of the bones is leached out, and the nutrients you’re getting from bone broth is from the marrow.” She adds apple cider vinegar for acidity to increase the bone leaching, as well as salt, onions, and carrots for taste. While she sometimes uses the bone broth when cooking, Mahanian says, “Mostly, I drink it in a cup. I just warm it up and drink it.” Even her kids start their day with a serving.

Bone broth, according to Mahanian, contains protein, omega-3 fatty acids, minerals such as iron, phosphorus, and magnesium, and amino acids such as glutamine and glycine, all of which can improve health. She explains that it’s difficult for her to generalize, since TCM treats patients holistically and provides individualized health assessments. However, she often recommends bone broth for patients seeking help with fertility issues, gut inflammation, skin appearance, amenia, and weak immune systems.

In the last decade, scientific research has also turned its attention to the potential curative nature of bone broth. Some studies have found that bone broth has anti-inflammatory properties, while others identify concentrations of collagen-derived amino acids and essential minerals. The concentration of nutrients in the broth vary, however, leading to inconclusive results. Despite the lack of scientific consensus and ongoing research, bone broth has a loyal following, growing with specialized diets such as the paleo diet, which promotes its consumption.

Sebastian Cortez, owner of Sebastian & Co Fine Meats, started drinking bone broth regularly when he was on the keto diet. “I stepped away from drinking coffee, and started sipping bone broth. It’s not going to wake you up like coffee but it fills you up, I think, with the collagen instead of the caffeine,” he says. He enjoys bone broth so much that he installed a bone broth bar when he opened his downtown location on Howe Street. The artisanal butcher shop offers the bone broth as an accompaniment to sandwiches, or as a drink on its own.

“Some customers come every day for bone broth, and they’re all personal trainers or they’re fitness instructors. There is a girl who is a martial arts instructor, and she’s here every single day for bone broth,” says Cortez. He says another customer with a brain tumour drank the bone broth regularly, convinced of its positive benefits.

As a former chef, Cortez says he’s primarily concerned about creating a pleasing flavour experience for his customers. The bar serves either chicken or beef bone broth in coffee cups, with the option of infusing the liquid with tea bags filled with herbs and other ingredients. Sebastian & Co features a picante broth with cayenne and black and white pepper; a pho-inspired broth with star anise, cinnamon, and cloves; and an elixir with lemon, ginger, and turmeric. The bar also carries rotating special flavours, such a Thai infusion with galangal, lemongrass, lime leaf, ginger, and garlic. 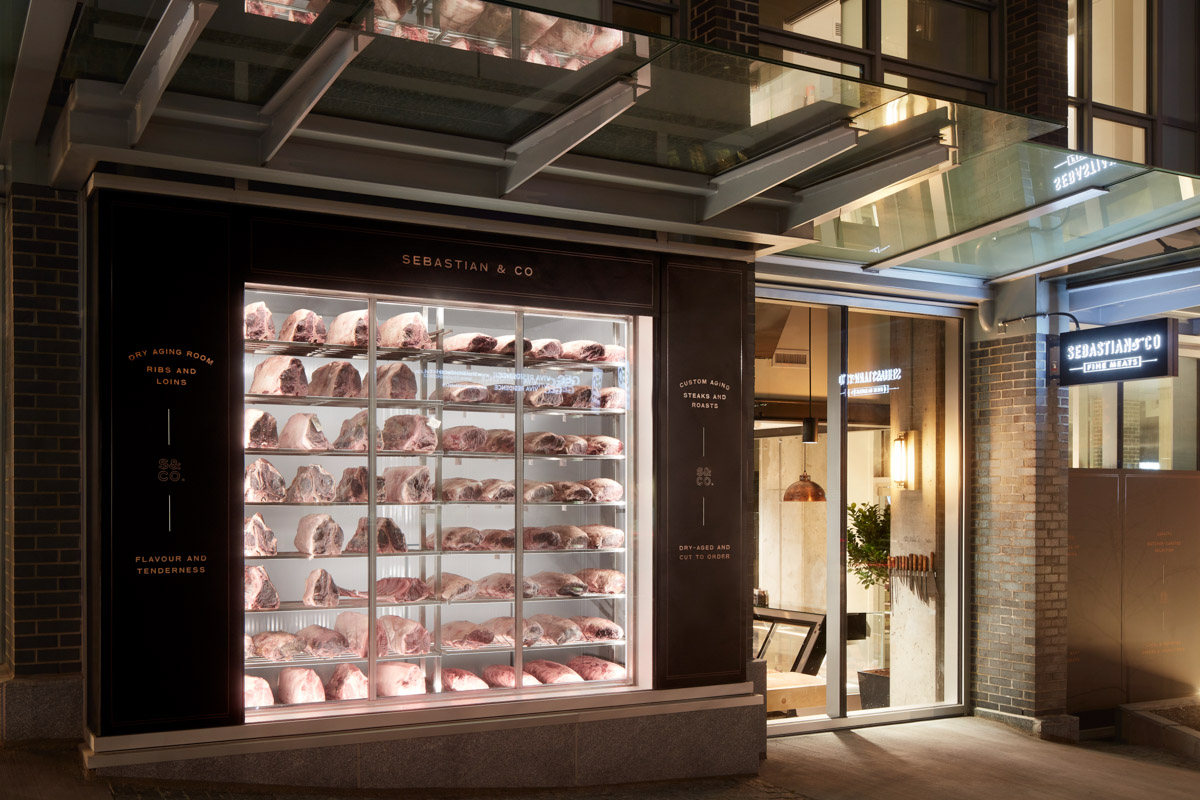 Cortez gives me some of the plain beef bone broth to try. I remove the coffee cup lid to reveal a clear amber liquid. I take a sip and am immediately struck by the purity of its savoury and slightly sweet flavour. I take more sips, and my belly warms. Meanwhile, the chicken bone broth with the elixir infusion tastes like the perfect aromatic tonic for a chilly day.

Sebastian & Co prides itself on the quality of their meat, sourcing from farms that raise their livestock hormone and antibiotic free. The kitchen maximizes the collagen content of the beef bone broth by using knucklebones and marrow-rich femur and shank bones. For the free-range chicken bone broth, the bones from the backs, breasts, and necks of the birds provide nutrients and flavour.

The butcher shop makes large batches of bone broth, simmering ten kilograms of bones in forty litres of water for twenty-four hours. The resulting liquid is strained twice, with only Atlantic sea salt added for flavour. Unsalted bone broth is sold to customers to use in their cooking.

“Especially in the winter time, on a rainy day, people want to have a hot savoury drink,” says Cortez, who thinks other people might make the switch from coffee and tea once they give bone broth a try.

I can see what Cortez likes so much about bone broth after I sample from his shop. And while my own version doesn’t have the same pristine clarity, the flavour from the long-simmered bones is satisfying. I slowly drink it down, savouring the last cosseting drop.