Not long ago, Namibia’s majestic big cats and other wildlife were thriving in their natural habitat, thanks to sustained efforts from nature reserves such as Okonjima, home of The AfriCat Foundation. Now the animals and their protectors are struggling under the weight of the global pandemic. According to a public message published on the foundation’s website, the disappearance of visitors to the Okonjima Nature Reserve and the drying up of donor money has left the organization with limited staff, resources and equipment, and no way to provide basic veterinary care for animals or protect them from poachers. As the foundation issues a desperate plea for help, we look back at this story from our 2016 archives, when we walked among the cheetahs at Okonjima.

There’s a noise behind me. Instantly, one of the three cheetahs in front of me opens its eyes and cocks its head toward me. Though exhausted after their unsuccessful hunt, the cats sprawled in the dirt a few metres away are still alert to everything around them.

I am in Namibia in Southwest Africa, at the Okonjima Nature Reserve, home of The AfriCat Foundation. AfriCat, a word play on “a free cat”, is a non-profit organization striving to improve the long-term survival of Namibia’s predators in their natural habitats. Part of their funding comes via tourists like me who stay at one of their lodges and go on safaris to get a look at these elusive animals. 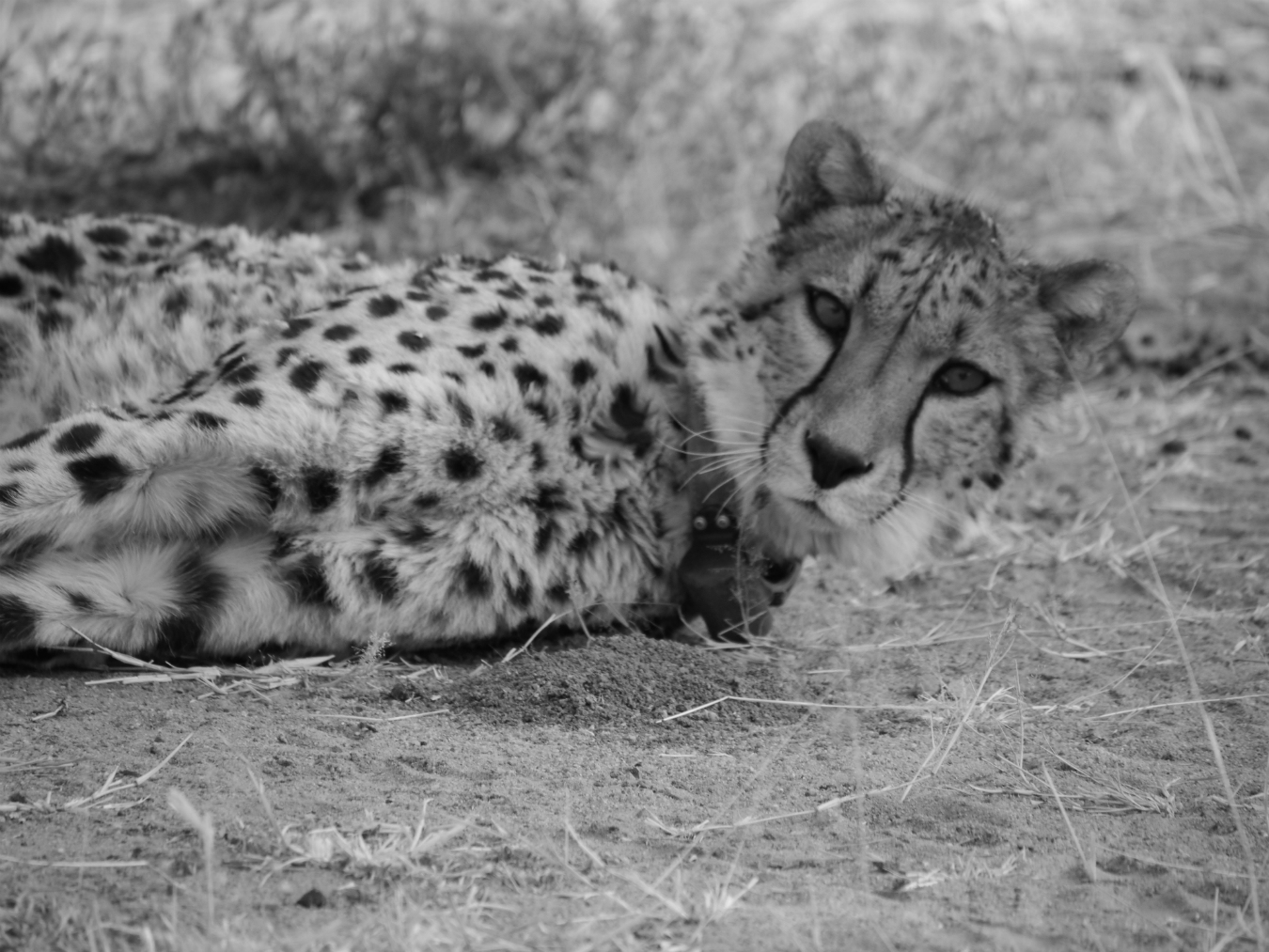 At the slightest noise, the cheetah goes from dozing to alert.

The three cats have just stalked and chased a troop of baboons. Howling loudly, the baboons climbed trees before the cheetahs could catch them in their strangling jaws. Though they run fast, cheetahs can’t run for long. Having sprinted 300 to 400 metres without a kill, the trio of cats must now rest for a half hour to bring their internal temperature down or risk hyperthermia and death.

Even when you’re the fastest animal on earth, hunting isn’t easy. And this illustrates a key role for AfriCat.

As more of Namibia’s wilderness is turned into farmland, predators like lions, leopards, cheetahs, hyenas, and wild dogs are increasingly threatened. Many farmers assume all carnivores are livestock-killers, and so they shoot, trap, and poison them indiscriminately to protect their farms and herds. AfriCat educates farmers and children about the human-wildlife conflict, funds and constructs kraals to protect livestock, rehabilitates injured and orphaned animals, and relocates habitual livestock raiders. 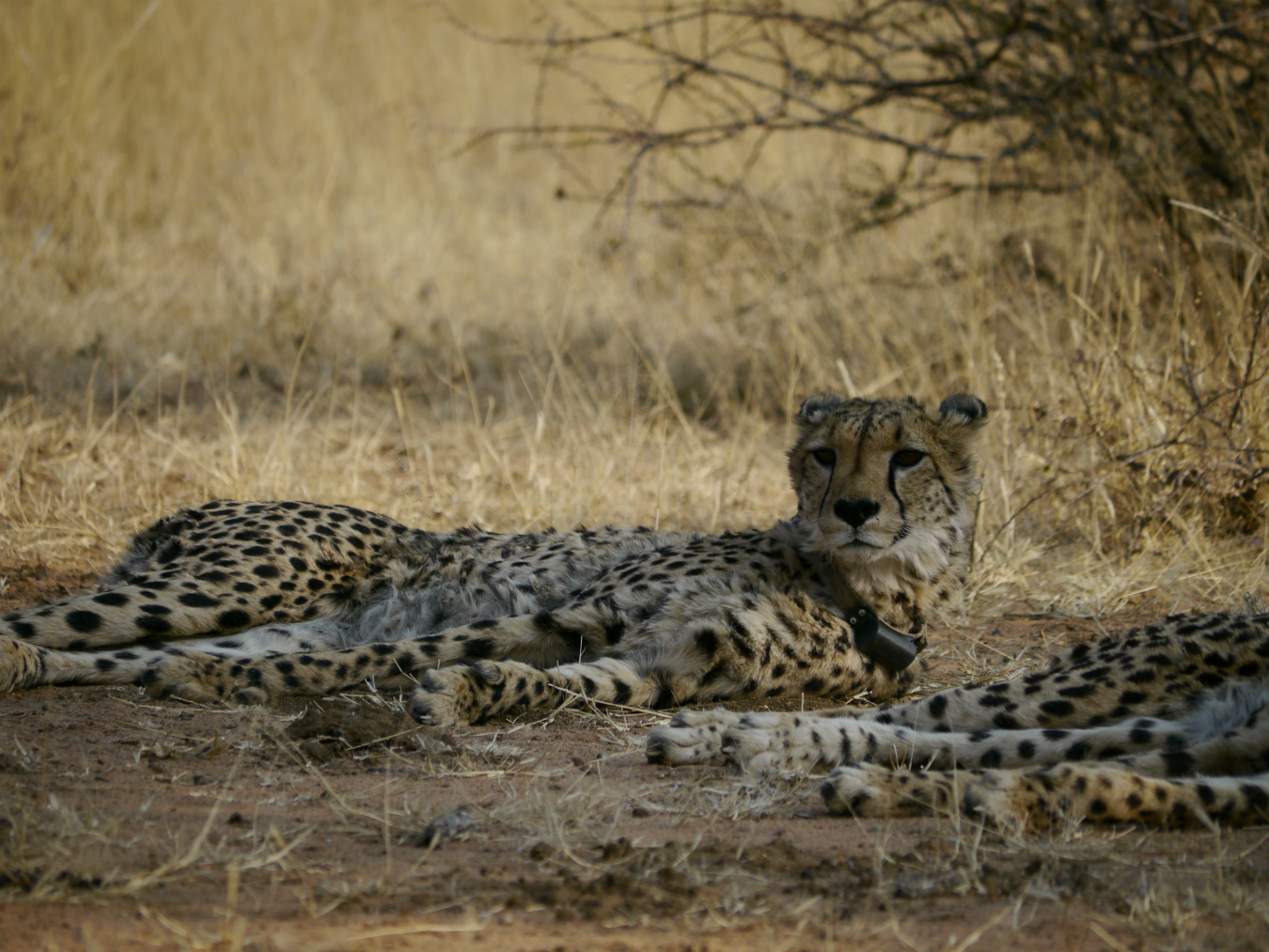 Early on, the AfriCat Foundation learned that it couldn’t simply relocate every supposed problem cat to a new predator-friendly area. Cheetahs in particular have difficulty finding water and prey in a new environment, and their stress levels increase when they interact with other predators hunting in the same space. The first cheetahs AfriCat rescued took two months to learn how to sustain themselves after their release—cats can’t simply be darted, relocated, and left on their own. Education to prevent predators from being labelled problems is a much better use of resources, and better meets AfriCat’s conservation goal. Relocation is a last resort, but can save endangered cats.

Injured and orphaned animals hosted by AfriCat live in natural enclosures of five to 20 hectares as they recover and learn to survive on their own. Their meals are supplemented with meats dragged behind a truck. Rangers assess the cats’ skills to make sure they’ll be effective with live prey. When they’re ready to fend for themselves, AfriCat releases the animals into huge reserves free of other predators. The cats are outfitted with radio collars so that rangers can track them to ensure they’re eating and thriving.

Tourists accompany rangers on trips to visually check the animals’ health. It’s a rare opportunity to see cheetahs and leopards up close. On our first day, we search for hours before the beeping of the VHF receiver leads us to a leopard. She leans against a giant termite mound until all six of us in the Land Rover snap her photo. Bored with posing, she languidly saunters away, presumably to nap in a tree before she hunts for dinner. The ranger says it looks like she’s been feeding well. 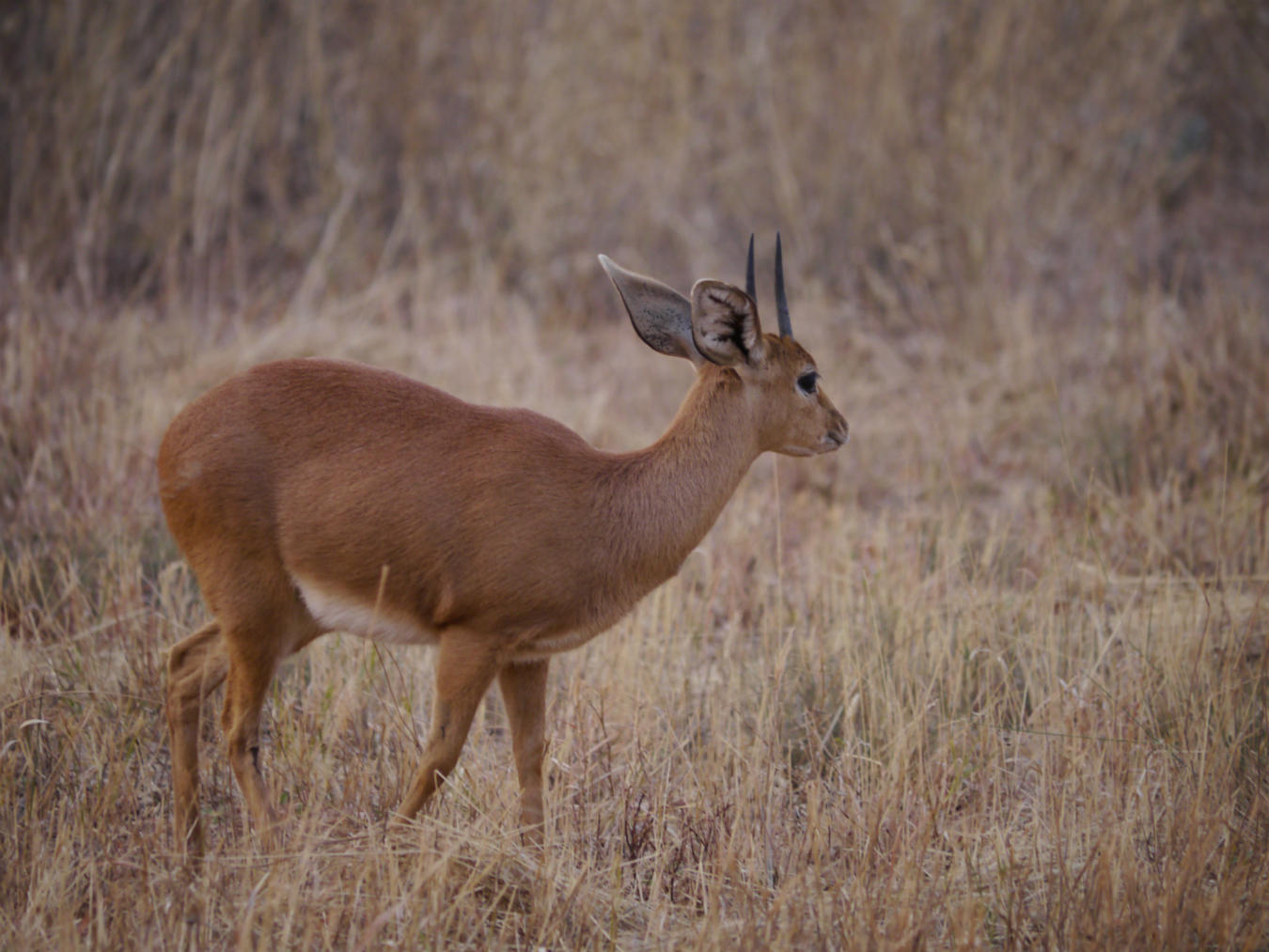 Small antelopes are favoured prey for cheetahs and leopards.

The next morning our job is to make sure the aforementioned coalition of three cheetah brothers is successfully adapting. We first drive through a non-predator area, passing three giraffes situated perfectly in the morning light. Later we see a Cape fox huddled in a ball, waiting for the winter sun to warm it before it hunts rodents and eggs.

Following the radio telemetry, we eventually end up in a far corner of Okonjima’s vast 20,000-hectare reserve. The least disturbing way to check cheetahs at rest is on foot. Slowly and silently, except for the loud beating of our hearts, we walk towards the three cats. The ranger motions us to sit on the ground a few metres away from them.

Like house kitties, the cheetahs doze, stretch, and roll in the dirt, exposing their fluffy bellies. That is, until that noise from our group makes the leader cat’s head snap up and its pupils narrow into focus, indicating it is soon time to take our leave.

This article from our archives was originally published on November 3, 2016. Visit our Travel section.