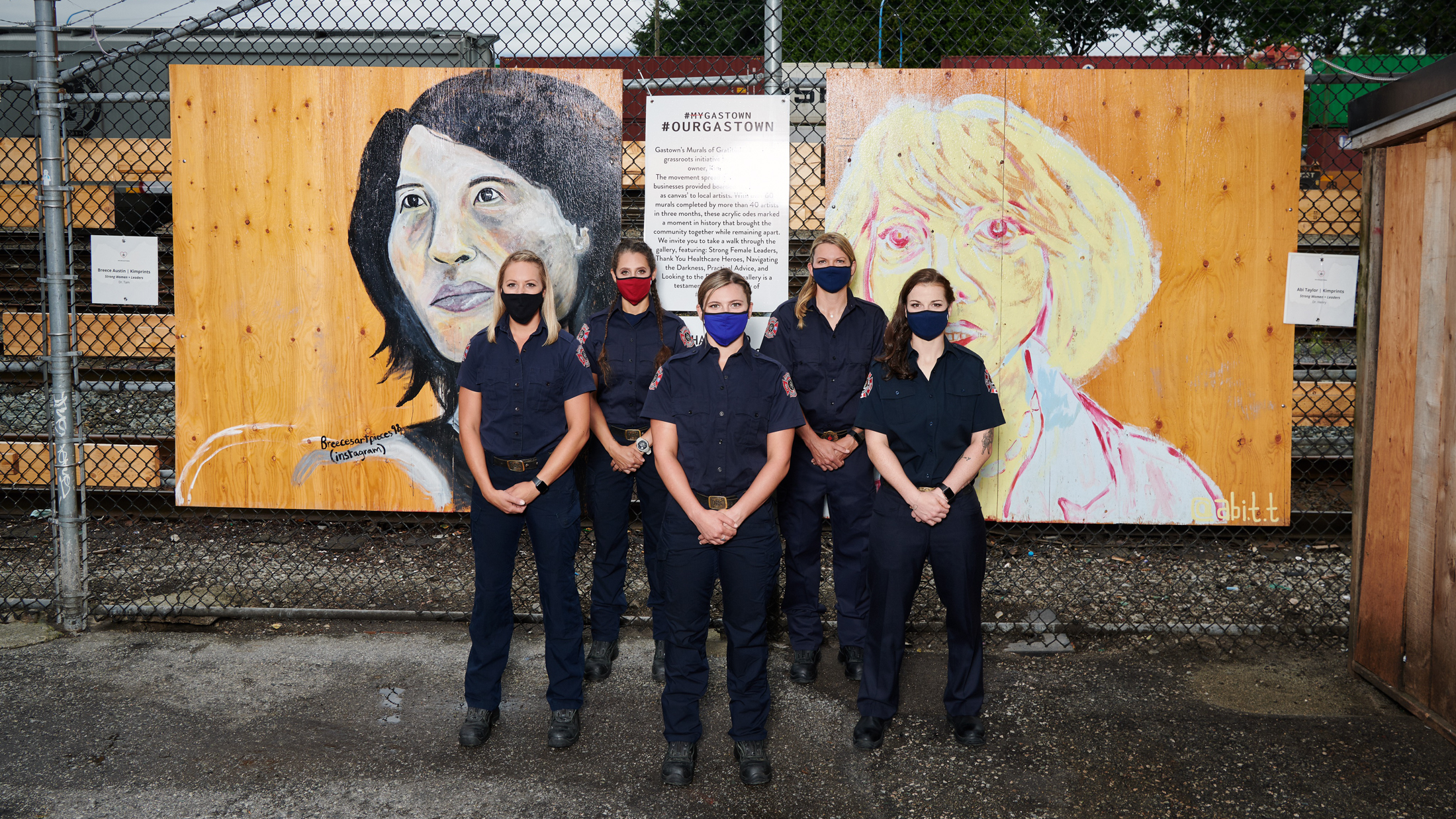 Women make up nearly half of the models for the 2021 Vancouver firefighter calendar. Photo by Erich Saide.

When Jayde Quilty agreed to pose for the latest firefighters’ fundraising calendar, she didn’t realize she was setting a course for a new generation of women. All she did was ask a few colleagues to join her.

She initially reached out to two women who joined the Vancouver fire department with her in 2018. When they said yes, she persuaded a more senior firefighter and her girlfriend to join them, too. Two more women signed on, and suddenly, there was gender parity.

For a calendar that, to date, has seen only three female firefighters pose in its 34-year history, the results are already breaking down barriers.

“I know it’s just a calendar,” Quilty says. But the balance between men and women in the 2021 Hall of Flame calendar will be nearly equal (and would have been, had one woman not dropped out due to an unrelated injury). That, she says, is “super special.”

“I think it’s kind of like a new beginning, actually.” 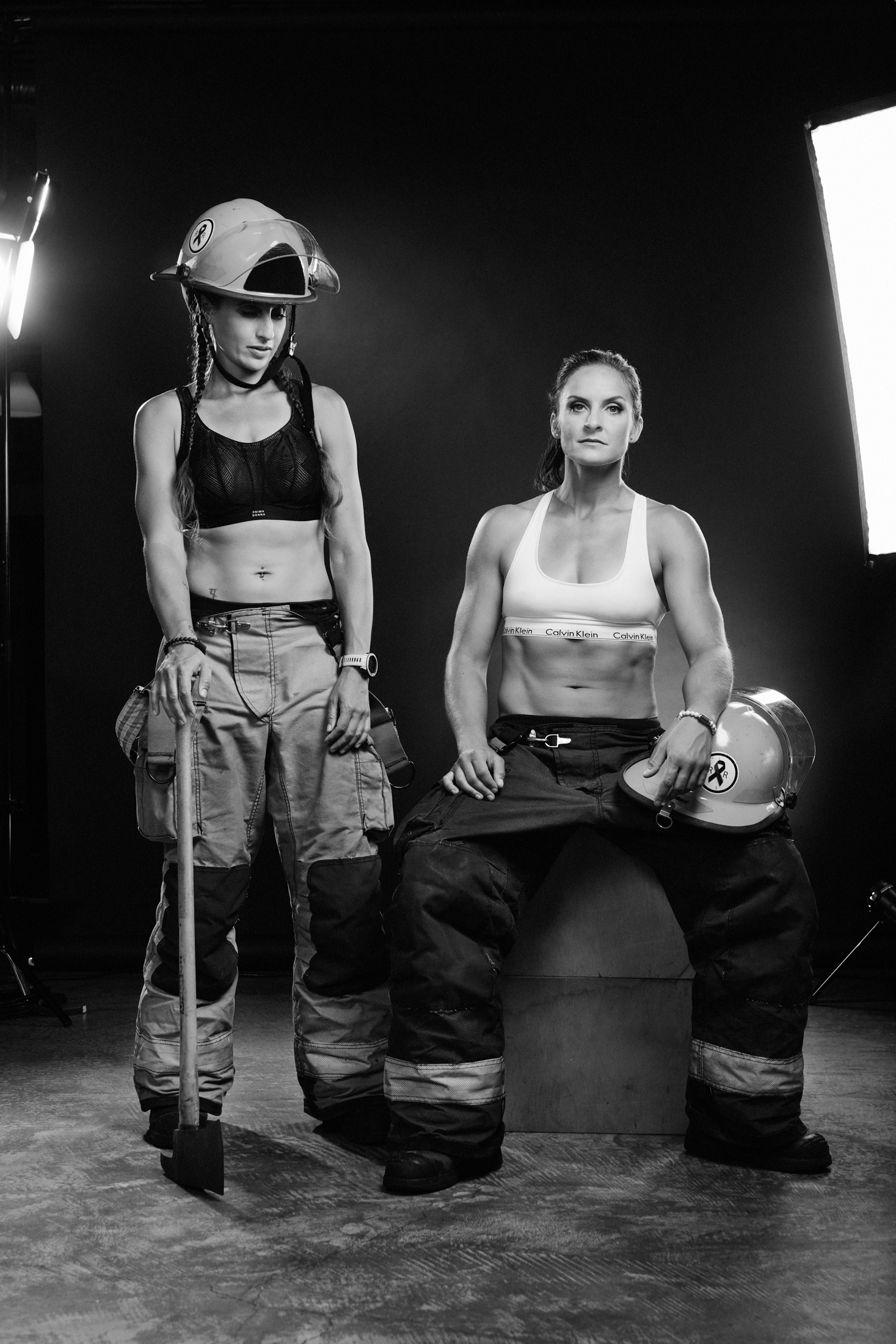 Jayde Quilty (sitting) poses with Kelsey Lepard in studio for the new Hall of Flame calendar. Photo by Erich Saide.

Quilty, who will be the face of November when the calendar comes out this month, says she feels comfortable taking her place among pages that have previously been so masculine. “It feels completely natural to me to have women posing in the calendar as well.”

In fact, she hopes the new representation will inspire girls to consider a career in what’s traditionally been a male-dominated field. So does the calendar’s coordinator, Brandon Kaye, who made his debut in the 2019 iteration as the People’s Choice and has worked behind the scenes on the fundraising initiative ever since.

“People are used to seeing 12 months, 12 different males in the calendar,” he says. “But this year it’s going to be a totally different look. It’s a changing of the times.” 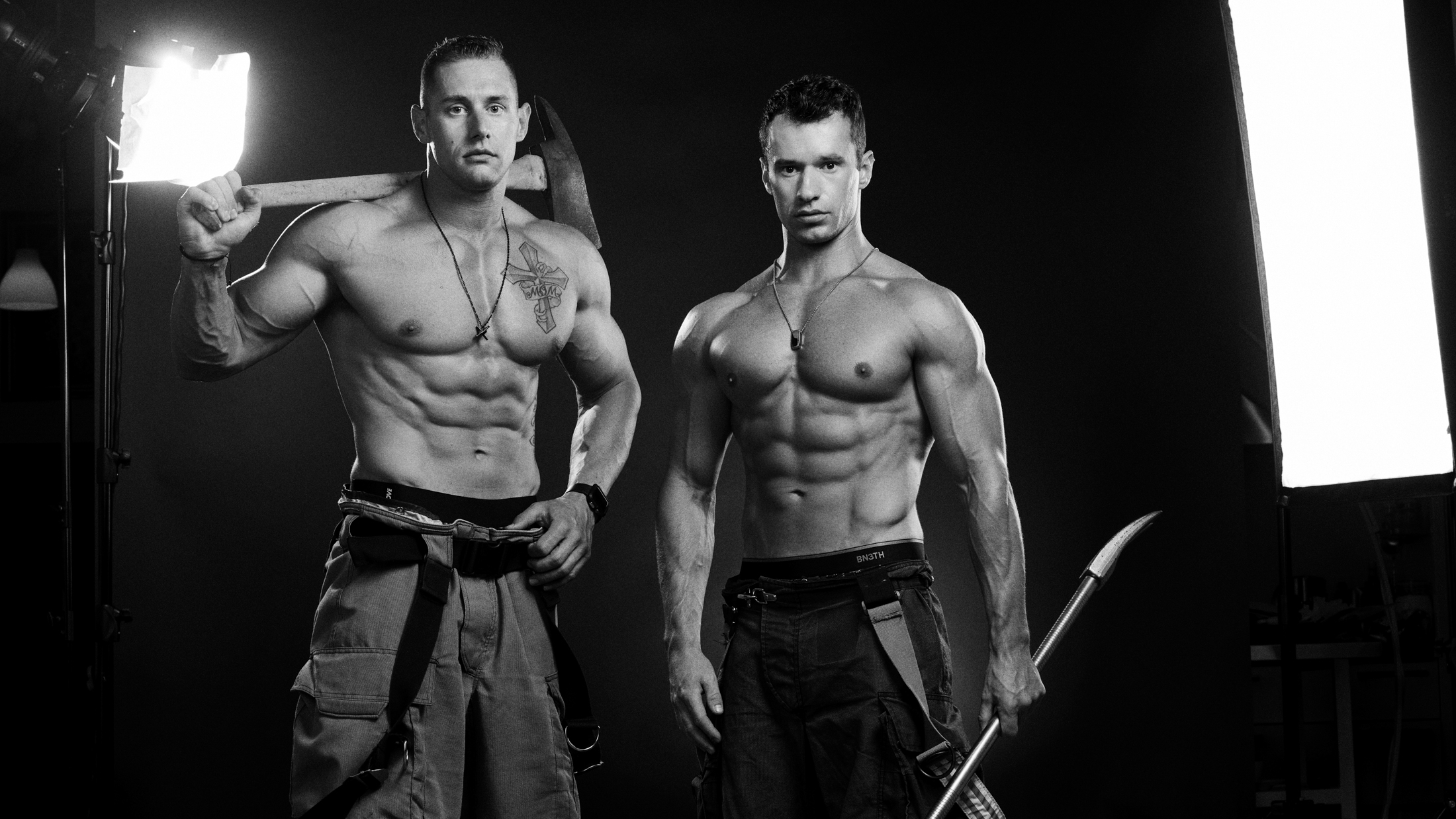 Of course this year’s production presented exceptional challenges, from the need to wear masks and socially distance in the studio to a host of other COVID protocols for first responders volunteering their time to shoot a calendar for charity. But organizers agreed that if there were a way to safely proceed, they should, especially since the calendar’s beneficiaries—the B.C. Burn Fund, Snacks for Kids, and Lifelines for Seniors—have been particularly impacted by COVID.

The result sets a new creative tone in more ways than one. “It’s not the cheeky firefighters’ calendar where we’re all greased up, necessarily. We wanted to take a more serious approach to this, with all that is going on—not with just COVID-19 but with all the social movements going on in the world today,” Kaye explains.

The new photos strike a deliberately less playful pose, some featuring the participants gathered (safely) in front of the Gastown murals paying tribute to first responders, others shot in a more sombre black and white. 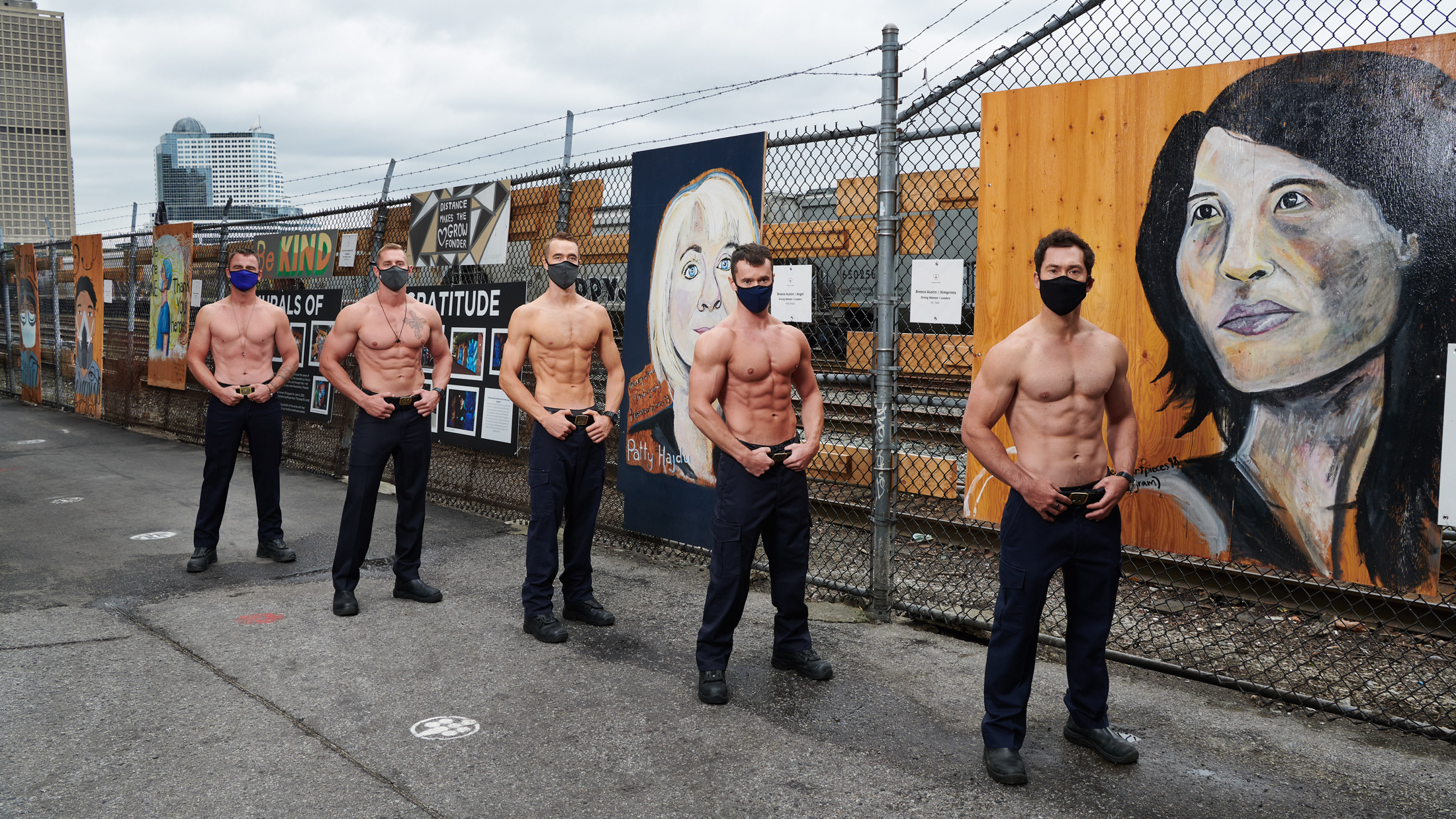 It’s meant to reflect the struggle that first responders and people around the world continue to face. “So it’s a little bit less flames being thrown and water fights and flexing; it’s got a little bit of a more serious feel this year,” Quilty says.

“I hope people see an image that is deeper than just a half-naked firefighter,” Kaye offers. “I hope they see an image of somebody who sacrifices on a daily basis at work to help others.”

Which is not to suggest the photos are any less striking than they’ve been in previous years. They’re incredible, Quilty says.

“This is definitely a new look and a different direction, but I think it’s going to be excellent,” Kaye agrees. 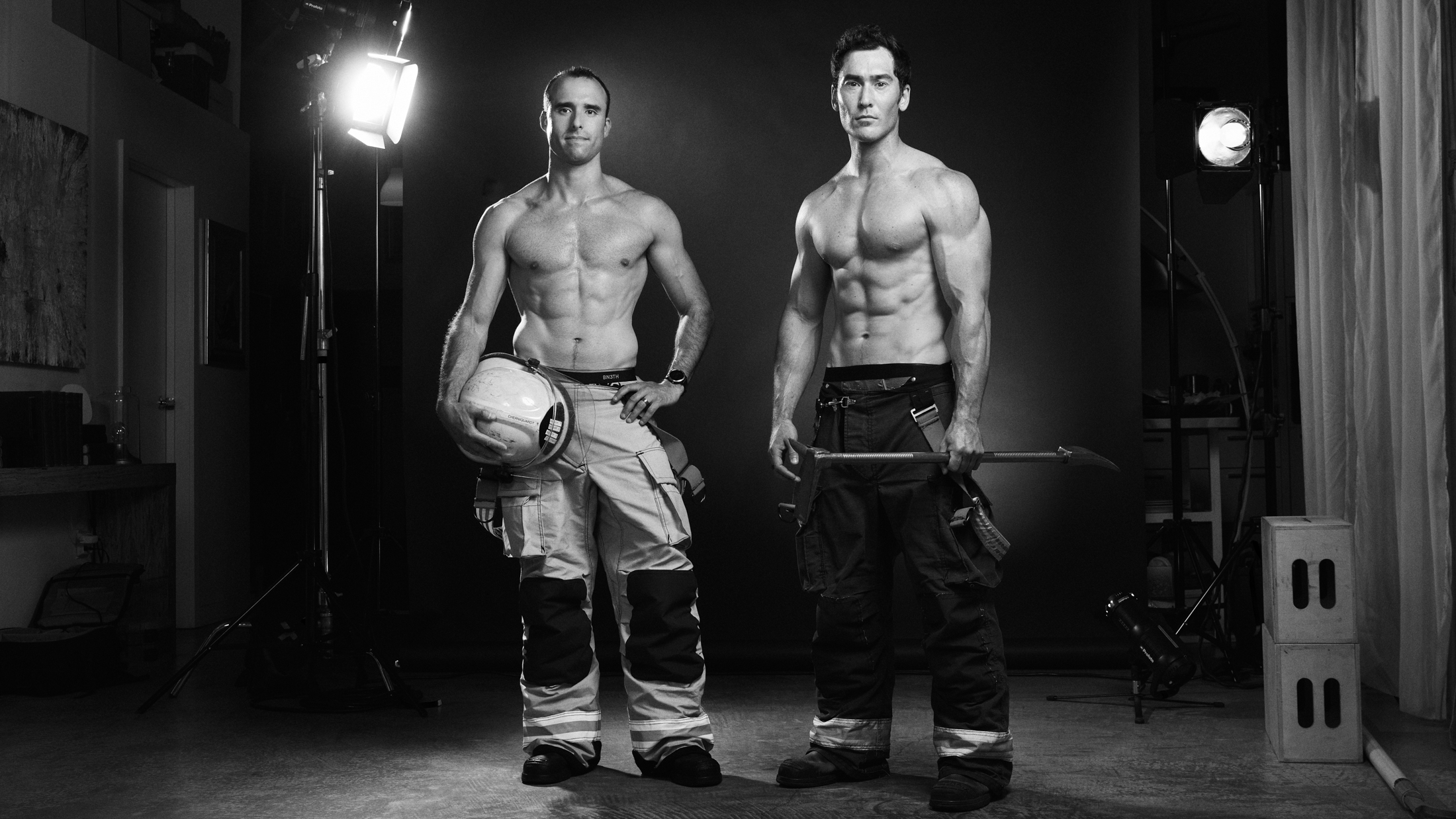 For Kaye, the top priority is to keep supporting the charities that rely on this calendar and other Vancouver Firefighter Charities’ initiatives for assistance. Since its launch in 1988, the calendar has raised well over $1 million, he says, and 100 per cent of its proceeds go to its beneficiaries. “It’s important to me because it’s a big part of the reason why I joined the fire department. Being a frontline worker, being a part of this community—I want to help out the community, I want to help others.” Whether that’s behind the scenes or in front of the camera, on duty or off.