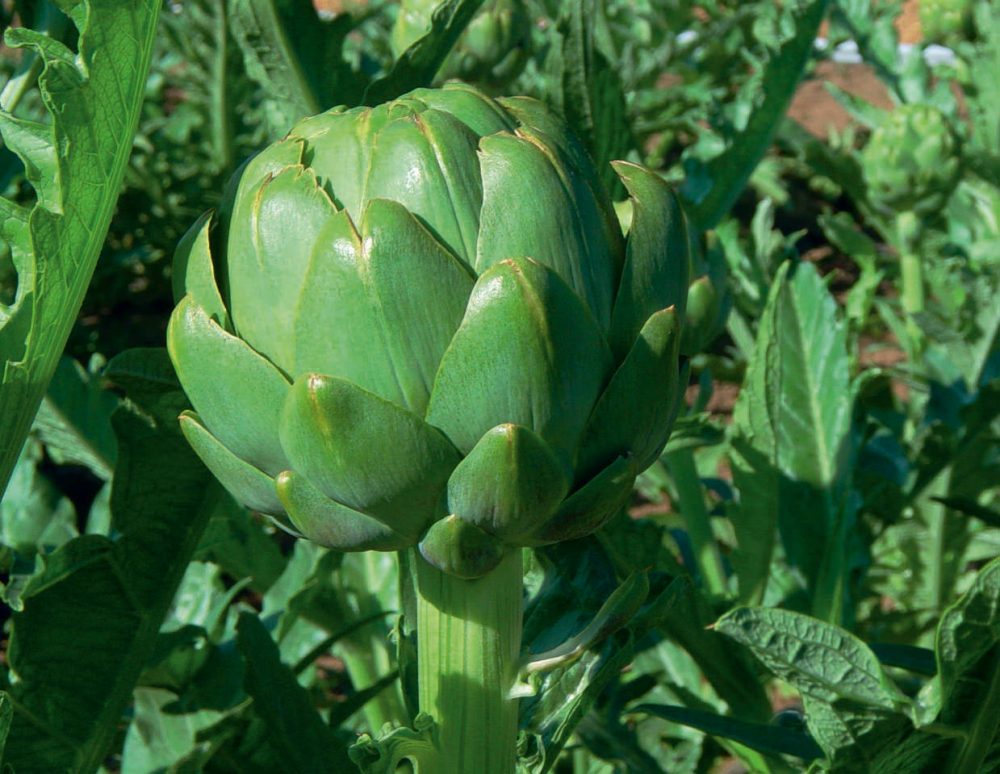 There may not be a vegetable more intimidating than the artichoke. Sure, when their tender hearts are marinating in jars they seem harmless, but it’s easy to become a little fearful in a field of spiky, chest-high plants threatening to club you with their ripe artichoke fists. John and Donna Plough have risen to that challenge, however, bringing this Mediterranean staple and pride of California to the Canadian West Coast.

Fifteen years ago, the Ploughs set aside some space on their 20-acre farm in the northwest corner of Abbotsford to experiment with 50 artichoke plants. In their second season, they ambitiously quadrupled the crop size, but sadly, without much result. “I think we only got three artichokes that year,” Donna recalls. “We had a terrible learning curve.” But they persisted, and Glen Valley Artichoke Farms has flourished since. John agrees there was no easy beginning. “When we first started, many people didn’t know what an artichoke was or how to cook them,” he says. “We had to teach them a little at a time because people won’t buy something strange or different.” But Donna admits they stuck with the artichoke specifically because it was an unusual crop. “And I guess we just like artichokes,” adds John with a laugh.

It is a sentiment shared by the Italians, who have been enamoured with this thistle since the 16th century, especially in Rome, where it fetched the highest price of all the vegetables at market. Artichokes were first cultivated in Naples, Sicily and also Florence, where it was a particular favourite of the Medici family. Catherine de’ Medici is attributed with bringing artichokes with her to France upon her marriage to Henry II, and the French claim they were the first to bring artichokes to the New World in the 19th century, specifically to Louisiana. Eventually, Italian immigrants travelled west across North America and brought the artichoke with them to the coastal regions of California. Nearly all artichokes grown in the U.S. are now done so in the Golden State and nearly two-thirds of the commercial crop is grown in the fields that surround Castroville, the self-proclaimed “Artichoke Center of the World”, 92 kilometres south of San Jose. While these Californian farmers have the luxury of harvesting their plants year-round, the cold north wind that blows through the Glen Valley destroys the Ploughs’ crops every winter. Each growing season begins from scratch in late February with 30,000 plants started as seeds inside the Ploughs’ heated greenhouse. In the best-case scenario, the small plants are transferred by hand into the fields in mid-May, and by August the artichokes begin to ripen. Harvesting can occur all the way through to November or for as long as a sustained frost holds off.

This year, they are growing three different varieties, one of which is purple, called Tempo that they’ve only grown once before, last year. It proved to be quite popular. “We do have some very loyal artichoke lovers out there,” says Donna. Having a local supplier makes it easy for Vancouver restaurants to feature the vegetable at its freshest, whether it’s roasted whole and accompanied by a poached duck’s egg and morels at Cibo Trattoria or used in the ratatouille cannelloni at West, as it has been in the past. Five years ago, Glen Valley Artichoke Farms became the first B.C. producer of preserved artichoke hearts when the Ploughs launched their line of McColl’s products, which, along with their fresh produce, can be found at a number of farmers’ markets across the Lower Mainland. John says proudly, “Most of our customers tell me that they prefer [our artichokes]. They say they taste fresher, and I suppose it’s because they’re fresh off the field and then onto their dinner plates.”

The easiest and possibly tastiest way to prepare an artichoke is, once parboiled, to simply slice the artichoke in half, drizzle with olive oil and sear on a grill. Then each bract, or leaf, can be snapped off, dipped in any variety of sauces and the flesh can be scraped from its base. The persistence that one must have when devouring a whole artichoke inspired the Italian phrase la politica del carciofo, or “the policy of the artichoke”, which essentially means that it’s best to deal with opponents one at a time. But do not be afraid of this unusual vegetable, because to the victor belong the spoils. As Pablo Neruda, Chilean poet and consummate lover of food, reminds us in his “Ode to the Artichoke”: “Scale by scale, / We strip off / The delicacy / And eat /The peaceful mush / Of its green heart.”