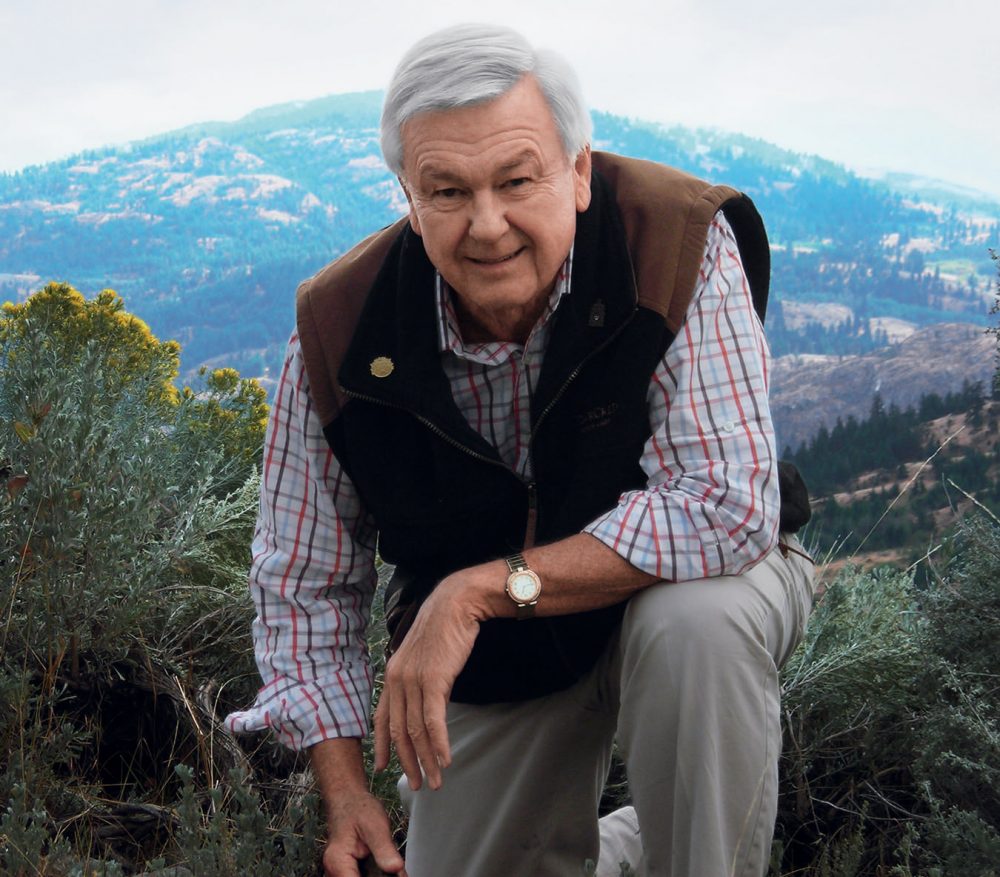 The Honourable Ross Fitzpatrick sits in a leather armchair, dog attentively at his feet, in his home looking across Okanagan Lake. Anyone thinking that he arrived at this point in time due to fortuitousness would be gravely mistaken.

He founded CedarCreek Estate Winery in 1986 and saw it to success with a savvy amalgam of business acumen, knowledge of Okanagan agriculture history and confidence that the region could produce, in his words, “pretty good wine”. But there was plenty more to do before he became a Jean Chrétien–appointed Canadian senator for the Okanagan-Similkameen, and before eventually settling into this very home.

Mr. Fitzpatrick grew up here, “in the valley. Though I wasn’t sure I wanted to come back to an apple orchard every day of my life,” he says. He went to the University of British Columbia to major in agriculture, and came home that first summer to work with his dad, who was selling fruit to Sun-Rype, a company he himself later worked for. “I had all sorts of ideas, new ways that I thought could improve the business. My dad said, ‘You are here to work, not to think.’ So I understood I had to get on with things.”

The first thing Mr. Fitzpatrick did was move away from agriculture and on to business for his second year and beyond at UBC. This path eventually led him through to Columbia University for postgraduate work. But the crucial point is that the Okanagan has always been deep within his heart. “I participated [as research director] in the Royal Commission on the Tree Fruit Industry of B.C.,” he says. “And that stayed with me, the notion that the Okanagan Valley had virtually unlimited potential.”

Mr. Fitzpatrick is a self-professed “project person. Have been my whole life,” he says. “One of my first jobs was to take over a very poorly performing car wash company in Bellevue, Washington. It took some time, but after training people properly, putting in rigorous systems, the company turned around fairly quickly. I take a lot of pleasure from making a company work well, rise to its potential.”

Such was the case with Viceroy Resource Corporation, where he led the development of the company’s Castle Mountain gold mine in northern California. It was successful by any standards as a mine, but the Viceroy legacy is one of reclamation and environmental responsibility, and it’s a model for mining projects around the world. Mr. Fitzpatrick is modest about it all, saying simply, “We did our best to ensure the mine was a good citizen.” The accolades flowed in long after the mine was closed, and there were some key technological innovations made there, all dedicated to preserving the local environment.

He sits back with a smile, and says, “It took a while to convince my wife that moving to the Okanagan would be a good idea, but eventually we did it.” His term as a senator lasted from
1998 to 2008, when he reached mandatory retirement age. During his tenure, he served on several national panels and sponsored some major bills, but also dedicated a portion of his time to the interests and infrastructure of the Okanagan-Similkameen. Water, sewage, waste management, and national funding for parks were all part of his portfolio, and as in his business career, he made things happen.

CedarCreek Estate and its sister property and winery at Greata Ranch are today eminently successful. “When I was growing up, Greata Ranch was B.C.’s finest peach orchard. I figured it could produce nice wine, too,” he says. But when the new Free Trade Agreement loomed on the horizon in 1988, “most folks in the Valley were uprooting the vines, going back to peaches and apples. Not us. We kept planting. The key thing to me was that if you were going to continue producing non-vinifera wine, on the whole a forgettable product, then sure, you would lose out on the market, with the American wines flooding in. But if you produced real wine, with good quality, then you could compete.” That insight about quality is what has sustained pretty much unmitigated growth in the whole B.C. wine industry ever since. “We were either smart or lucky,” Mr. Fitzpatrick says of some of the decisions they have made for the wines over the years. But through it all, it seems luck really didn’t have all that much to do with it.