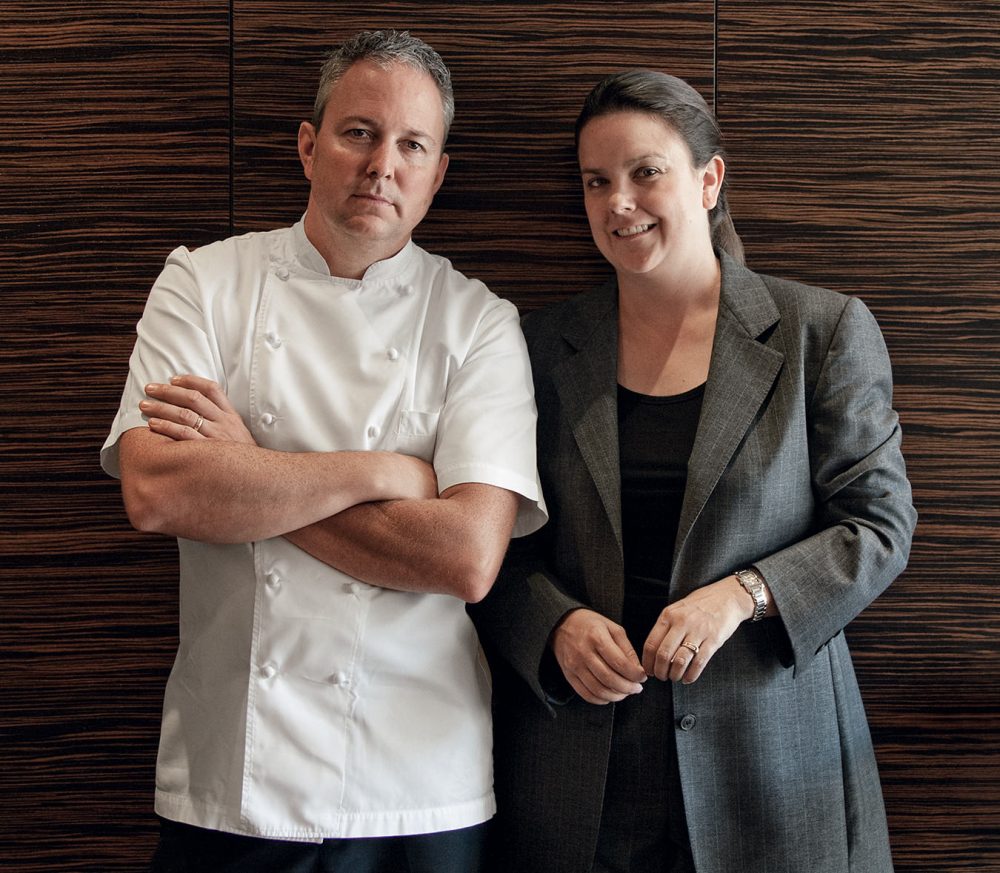 Scott and Stephanie Jaeger of the Pear Tree Restaurant.

A young couple turned the key on a tiny Burnaby restaurant along a nondescript stretch of Hastings Street. Their decision to open a restaurant of their own had been a year in the making; as they took possession of the space, they looked at one another and said, “Oh my, what have we done?” It was their first step together on a path that would lead to critical acclaim and send them halfway across the world to the Bocuse d’Or and the World Culinary Olympics. Over the past 14 years, the much-feted duo of Scott and Stephanie Jaeger has developed the PearTree into one of the Lower Mainland’s preeminent dining destinations. Most importantly, though, their relationship has successfully weathered the vicissitudes of restaurant ownership.

Scott apprenticed with Bruno Marti at La Belle Auberge before embarking on a culinary sojourn to England, France, Switzerland and Australia. He returned to Vancouver and to a brief consulting stint transforming the Granite Café into Ciao Mein, which was auspicious for more reasons than one. “It was the first time I’d had hands-on involvement with a restaurant opening. And,” he says with a smile, “that’s where I met Stephanie.” She was the assistant front-of-house manager; their budding relationship in close working quarters established the groundwork for their future as a husband-and-wife restaurateur team. Twice cooked pork belly with a spot prawn cassoulet at the PearTree.

Their challenges in opening and operating the PearTree were numerous. With only 1,000 square feet and a four-burner stove to work with in their original space, compromise was the initial name of the game. “I don’t think you could do what we did to open a restaurant today. A restaurant opening in 2011 has to be very polished and doesn’t get the same amount of leeway that we had,” Scott reflects. “We went into it with the knowledge that we couldn’t afford the whole package right away. We knew we had to stay on task and keep in mind what we wanted down the road. It had its frustrations, but there was an amazing feel to that little restaurant. Some of our regular customers miss the kitchen the way it was.”

This same spirit of give and take has fuelled their success in maintaining equilibrium between business partnership and married life.“It’s learning, it’s practicing, it’s trial by error,” remarks Stephanie. “One of the biggest things was learning that work is work and home is home. From a dining room perspective, I had to learn to say ‘I’m pissed off at the chef’ without being pissed off at my husband.”

The Jaegers readily acknowledge that perfection is something they will always chase. “After 14 years, we still haven’t had a grand opening,” Scott points out. “It’s still not at the point where we’re ready to do that. But what we have to sell is why people come back, and so we stay true to the course. Consistency is key.” Just another ingredient in their award-winning recipe for success.