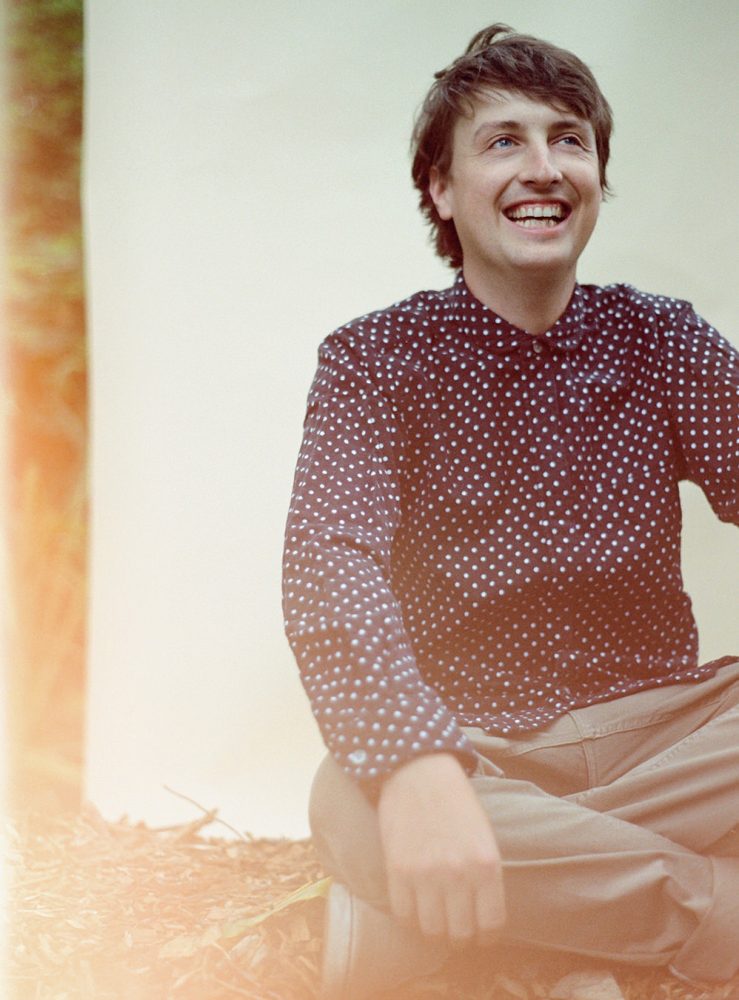 Beil wears an Engineered Garments top from Inventory, Norse Projects pants from Neighbour and his own shoes.

A burger boy, a murdered youth, an everyman, a tortured lover? Check. Various shades of Shakespeare? He’s played those characters, too. Whatever you tell him to be during an on-the-spot improvisation? Of course; Ryan Beil has performed them all. The Vancouver born and based actor—often messy haired, and always blue eyed and quick witted—has built up a solid fan following, writing, producing, and acting at home and across Canada, and touring on the improv comedy circuit internationally. Indeed, the Beil appeal is fairly all-encompassing and at the crux of his talent is a particular penchant for both serious dramas and the sharpest of comedy. Few actors do both very well, and fewer still do them both very well at the age of 29. Ryan Beil, a rare breed, does it all.

In conversation, Beil’s distinct voice is nuanced with sentences that tend to let the last three words juust draaw ouut. It has maximum effect when he wants to make a point—all part of the impeccable timing and delivery that draws audiences’ eyes his way when on stage or on screen. “Timing isn’t everything,” says Beil, who graduated with a BFA in acting from the University of British Columbia in 2005, “but timing is huge. Comedic timing you can’t really learn. Every audience is different, but comedic timing, it’s just,”—he snaps his fingers—“it’s there, you know? The audience is like an ocean. You have to ride those laughs.”

Theatre buffs have watched Beil throughout the years in a wide range of roles, from his three-season run at the Bard on the Beach Shakespeare Festival, portraying the likes of Touchstone in As You Like It, and Dromio in A Comedy of Errors. Last year he owned the part of First World War fighter pilot Billy Bishop (and 17 other characters) in a production of Billy Bishop Goes to War. The latter held special importance for the actor, who first realized he could make a career of his passion while watching a production of the same play in high school. His future co-star in Billy Bishop, Zachary Gray, was also the playwright’s son and a long-time friend. “It helped that I was friends with the writer’s son. That’s, like, really useful if you want to play Billy Bishop,” he says, laughing. “But the fact that it came full-circle like that was darn special.”

Naturally quick and clever, Beil’s onstage presence holds a certain intangible something that is reminiscent of very few others. He has been told he reminds people of a young Gene Wilder—“when I’m crazy and loud!”—and other times of English actor John Moffatt, who famously gave voice to Hercule Poirot on BBC Radio. Further to those, comparisons are few. “Not to toot my own horn,” Beil says, “but I am kind of a non-traditional, non-traditional leading man.”

“Comedic timing you can’t really learn. Every audience is different … The audience is like an ocean. You have to ride those laughs.”

On TV, Beil plays memorable “Ryan the Trainee” in an ongoing series of commercials for the restaurant chain A&W, stumbling through the motions of a newly-minted fast-food employee with singularly awkward finesse. Aired nationally, Beil notes that the ads have pinpointed a curiously specific demographic: “Moms. Mostly people who recognize me are middle-aged women. I don’t know if that’s just coincidence? But my character plays very well with most people’s moms, so all the autographs I’ve ever signed have been for people’s moms,” he says with feigned derision. There is even a Facebook group with upwards of 1,000 followers devoted to his character, affectionately called “Ryan The A&W Trainee <3”. Perhaps a subculture of Beileivers is brewing.

But when speaking of his craft, it’s clear the actor is more workaholic than class clown, and he has worked steadily since graduating theatre school with roles often overlapping. This year marked a conscious slight step back, selecting gigs more carefully to avoid burnout. It included taking a break from longer theatre stints, such as Bard on the Beach, and instead focusing more on pursuing film, TV roles, and live comedy with both the Vancouver TheatreSports League and with the troupe he co-founded, the Sunday Service. Made up of fellow comedians Taz VanRassel, Emmett Hall, Craig Anderson, Aaron Read, Kevin Lee, and Caitlin Howden, the group serves up weekly improv at Vancouver’s the Kozmik Zoo on West Broadway, and took home the award for Best Improv Troupe at the 2012 Canadian Comedy Awards this August. Beil also garnered a Best Male Improvisor nomination at the awards, and already has two Jessie Richardson Theatre Awards to his name. “I don’t think I could ever stop doing improv,” he says. “It’s such a nice release. It’s almost therapeutic at times.”

Nevertheless, the fall months still promise to be busy for Beil, with the Vancouver International Improv Festival upcoming in late-October, and a few theatre stints on the horizon, including a production of David Sedaris’s SantaLand Diaries with the Arts Club Theatre, and a four-performance solo show of Johann Wolfgang von Goethe’s The Sorrows of Young Werther staged through Theatre at UBC. “It’s about a romantic guy who goes to the country. He’s arrogant and obnoxious and he falls for a woman named Charlotte, who’s engaged to a guy named Albert. He falls madly in love with a woman he can never have—then shoots himself,” Beil explains, deadpan. “It’s kind of out of my comfort zone, which I’m excited about.” Great creativity often requires stepping into the unknown as a performer, and the same can be said for directors. In 2009, Meg Roe took a chance and cast Beil in a serious play, William Gibson’s The Miracle Worker. As he recalls: “Someone was like, ‘Oh you’re going to cast Ryan? But he’s kind of a funny guy.’ And I always get this quote wrong, but she said something like: ‘I’ve always found that the people who can make you laugh the most are also the people who can make you cry.’ And I think there’s something there, in that there’s something about someone who doesn’t take themselves very seriously, which is what a comedian has to do. It lends itself to connecting with an audience. Maybe it lives in that area of ‘I don’t take myself that seriously, so whatever comes out of me is going to be real.’ ”

Christopher Gaze, founding artistic director of Bard on the Beach, sees that duality as well. “He’s such an interesting mix, Ryan Beil,” Gaze has said. “Like many funny people, he likes to be funny, but he also likes the great dramas and wants to learn how to span and be a great tragedy actor too. I’m very, very fond of him and I think he has potential to be quite a star.”

A pilgrimage to Los Angeles may be in the actor’s future, but long-term, he’s perfectly happy with his place in the Vancouver scene: “I’m a small town guy at heart,” he says. And as far as the arc of future characters goes, Beil envisions a youth playing funnymen and a more villainous later life. “When I’m not so fresh-faced and a little more withered and wrinkly, I think I’d make quite a good Iago,” he says. “That’s also one of my greater loves—playing really shitty people.”

Even today he tackles the gritty roles with vigor; Beil recounts his part as an awful individual named Teach in David Mamet’s American Buffalo, a play he produced and acted in through the Main Street Theatre Company, where he is co-artistic director. “I generally get cast as the funny guy, the clown, an ‘everyguy’, but the fact that I did that, and got nominated for a Jessie for it—I think that role was the biggest stretch, the hardest I ever acted.”

Versatility is very much part of Beil’s repertoire and having seen the inner workings of both comedy and drama, he singles out the former for its level of difficultly. “You’re doing all the same things you’re doing in drama—and you’re trying to make them laugh,” Beil points out, eyebrows arched. “But in comedy you really can gauge whether it’s a good show or a bad show because if they didn’t laugh, it didn’t work.” Tapping into the audience is a skill he cultivated during his early days of improv, where the audience itself often acts as a character. It’s a shared excitement, a symbiotic relationship. “If you fall off the tracks a little bit, you get right back on, because the audience is right there with you.”

Long after Goethe wrote The Sorrows of Young Werther, he penned this: “Our greatest happiness lies in practising a talent that we were meant to use.” Beil is definitely on to this, and as his audience, the pleasure is all ours.