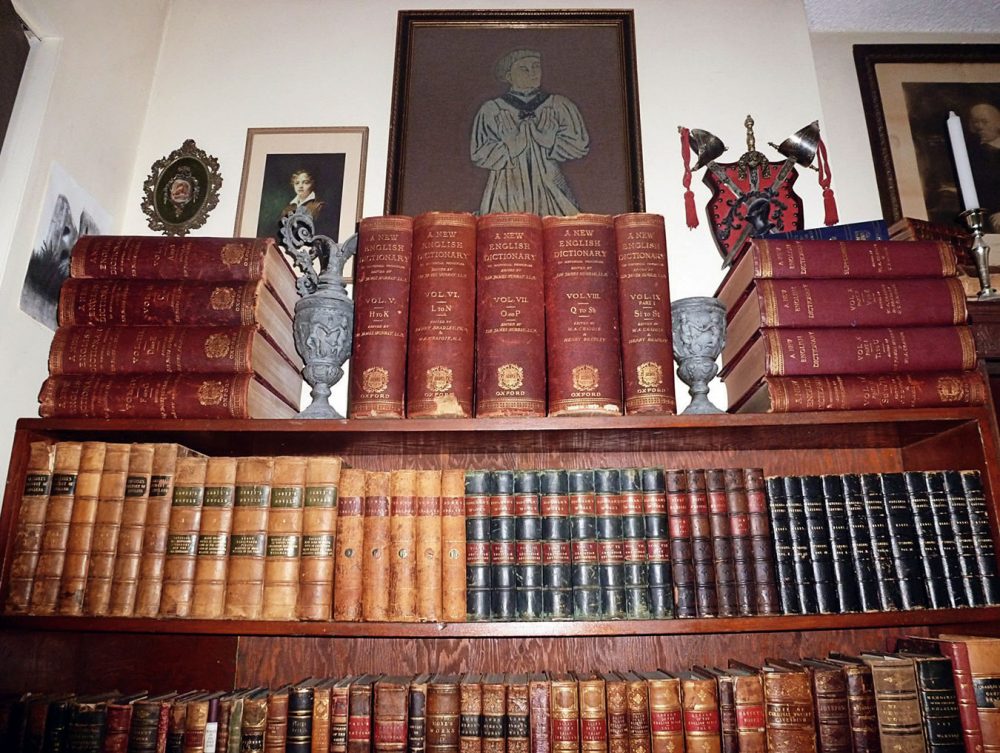 Over the last four years or so, 27-year-old bibliophile, autodidact, and historian Gregory Robert Freeman has assembled a collection of nearly 300 carefully chosen books, manuscripts, and legal documents dating back to circa 1270—plus about 130 modern books. His collection of 16th and 17th century English history and Protestant theology won second place at Canada’s Second National Book Collecting Contest in 2011, and a selection of his Tudor- and Stuart-era books and documents were exhibited at Simon Fraser University Library Special Collections earlier this year.

When Freeman was 16, he found an ordinary novel published in 1930 buried in some boxes in an armoire in his parents’ home. Curiosity piqued, he soon began purchasing older books relevant to his ancestral England, leading him back in time through the 16th and 17th centuries, eras which Freeman considers “the most dramatic and charismatic of any previous.” His quest has even led him to a precious vellum document dated 1561 with Queen Elizabeth I’s wax great seal still appended.

“I confess to being an opportunistic collector,” Freeman says, “so instead of actively and painfully pursuing a [specific] volume, I’ll instead wait for it to come along.” In this way he acquired what is currently his most prized possession—the 1607 Geneva Bible. Patient as he is, Freeman continues to browse in the interim. “Besides exhaustively looking through piles in the bookstores, I trawl the online inventories of booksellers around the world to see what’s available,” he says. Surprisingly, not all booksellers do their research, and so Freeman has been able to procure a few gems for quite a bargain.

Among Freeman’s treasures is a first edition set of the Oxford English Dictionary. Originally proposed as a 10-year project, the zealous editors had only reached ant after five years—a sobering realization about just how ambitious their endeavour was. Volume VIII, Q–Sh, weighs seven kilograms alone. A lesser-known fact: In 1919, J. R. R. Tolkien was an assistant editor for the letter W. Another interesting piece represents a pastime popularized by English clergyman and biographer James Granger in the 1700s. Granger would collect illustrations and supplementary texts, which he would insert into existing books as plates. Freeman owns one of these unique artifacts, a “Grangerized” copy of the modernized 1852 reprint of George Cavendish’s 16th century work, The Life of Cardinal Wolsey, which is bursting at the seams with 160 extra plates inserted by the original owner.

More recently, Freeman has also begun purchasing books with interesting provenance. His collection includes Alton Locke by Charles Kingsley, which is adorned with a rare bookplate belonging to Sir John A. Macdonald, as well as works once possessed by Sir Charles Tupper, Canada’s shortest-serving prime minister and the fifth Earl of Rosebery. When Freeman encounters innominate bookplates, he will search meticulously online and through books and library archives to decode the coat of arms and motto. Through this detective work he has been able to ascertain, for example, that his first English edition Historie of the Councel of Trent (1620) belonged to the third Baron of Carbery.

Naturally, Freeman spends quite a bit of time at local libraries conducting research—which he documents on his website, the “Olde Documents Repository”—and examining forgotten tomes and marginal notes. “There is a particular volume at the Vancouver Public Library, the 1513 Sanctus Hieronymus, that began my love affair with marginalia research a year ago and is quite dear to me. Not many people even realize that the VPL has such books,” Freeman says. “I’ve continued this sort of research at the VPL and also SFU, where I’ve found some very interesting things handwritten on the blanks of early books.”

“My collecting is not merely for the fun of it, but rather, the books I collect are often valid in my daily life, as I read them with every intention of benefiting from them,” he explains. “They shed a lot of light in dark places.”