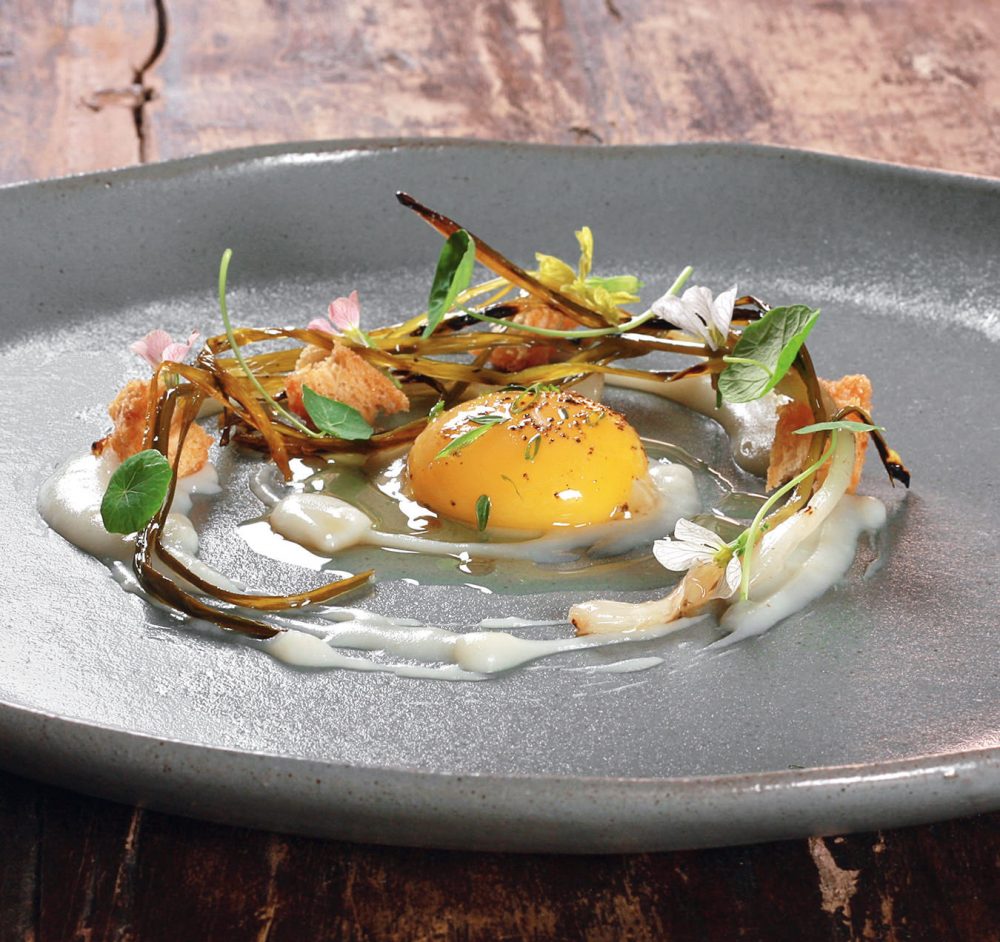 Leading the brigade in Diva at the Met’s open kitchen, executive chef Hamid Salimian is a study in concentration. He works with quiet assurance, assembling the components of each dish with precision and skill. Salimian’s masterfully plated creations are a gourmand’s delight, enthralling diners with the likes of mussel coal, foie gras walnuts, and translucent “glass” potato crisps. Yet his soaring trips through the culinary stratosphere are grounded in passionate reverence for the growing process and the integrity of top-quality ingredients.

Chef Salimian spent his childhood with his fingers in the dirt, so to speak. As a young boy, he accompanied his father and uncles on trips to northern Iran, where they constructed a citrus orchard and dairy farm from the ground up. He also clocked up countless hours in his mother’s remarkable garden. A skilled hobby farmer, she cultivated a profusion of fruits, vegetables, and flowers. “Cucumbers, zucchini, many different types of beans, peaches and plums, roses—you name it,” Salimian reminisces with a smile. “Mom always made us kids work in the garden to get our allowance each week. I’m so happy she did. My mother and father wanted me to know the value of life, and if you want something you have to work for it.”

This storehouse of food-centric boyhood memories motivated Salimian’s desire to source naturally grown, sustainable ingredients. “Iran is such a rustic country,” he says. “I grew up around food and watched people live off the land. Learning about the balance between growing and harvesting inspired me to follow the same path.” His first experiences building meals around Iran’s native ingredients included fishing for river trout, hunting for pigeons, and picking wild herbs to perfume the meat. Today, he translates the joy and wonder of these early food-gathering expeditions into his exploration of the Lower Mainland’s foraged treasures. One particular trip to pick cattails in Richmond really struck a chord. Salimian was amazed by their flavour, and discovered that the shoots are similar in taste and texture to hearts of palm. “I was blown away. A local ingredient that’s so much like an exotic delicacy, and it’s so abundant.” Experimenting with the cattails led him in a myriad of directions, from making cattail root chips to using flower petals from the young tips as a garnish. As for the shoots: “Some were for pickling. I also soaked a batch in a saltwater solution for a little bit of brininess and served it with flash-cooked sea cucumber, kombu gel, and a frozen ocean cloud.”

Though his menu is marked by a sense of culinary whimsy and playfulness, Salimian focuses squarely on the inherent qualities of a central ingredient as the starting point for his creative process. “When it comes to main plates, I don’t try to cook with techniques first,” he says. “Instead, I think about how an ingredient eats, and use the cooking methods that showcase it best.” His early summer menu featured a creamy 60-degree egg accented by the delicate, earthy sweetness of a lily bulb purée, grilled wild onions, and crunchy garlic croutons for textural counterpoint. Each dish is a meditation on flavour, and Salimian doesn’t shy away from the challenge of incorporating intriguing products brought to him by a number of local foragers and suppliers.

“If our guests enjoy what they eat, they’ll want to know more about the history or the story behind each dish,” he affirms. “And they’ll have a better understanding of our area through its food and the people who gather or grow it.” For Salimian, the dining table represents a confluence of ingredients both farmed and foraged, a meshing of product and place, a blend of classical and modernist techniques—a true gathering place.