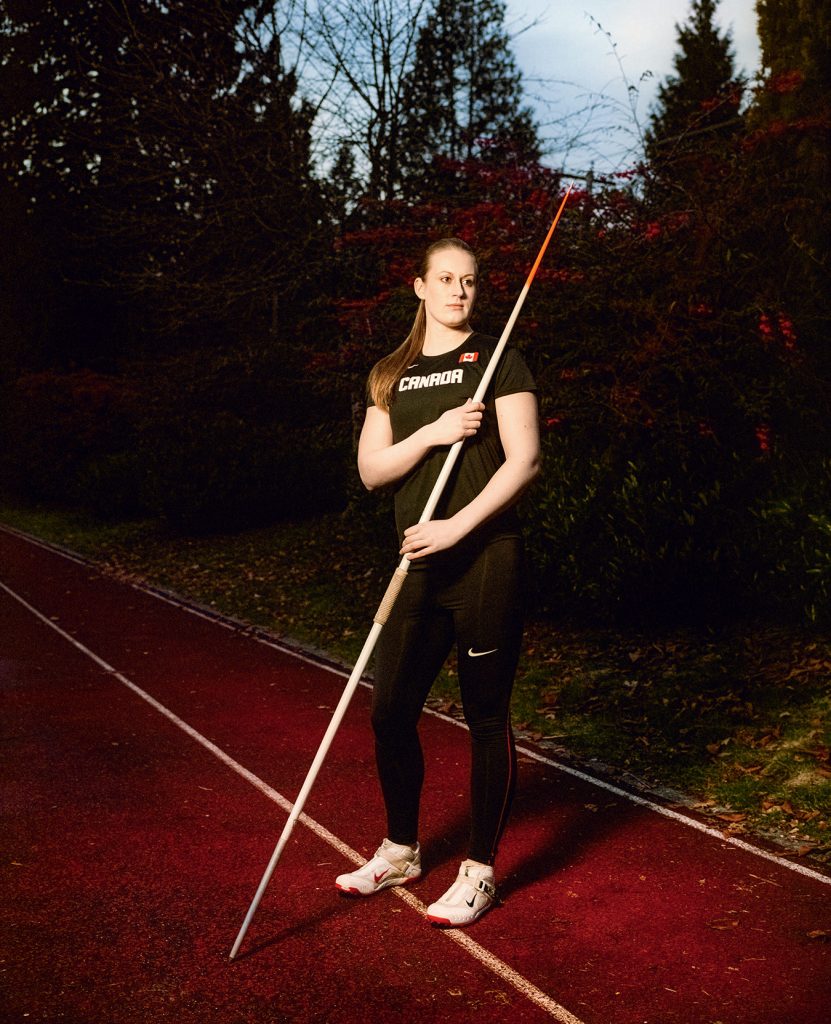 A comfy little coffee shop and grocery store tucked deep into a North Vancouver neighbourhood is quietly bustling one fine early spring day. Through the door walks a towering figure, exuding energy and athleticism. It is in her gait, her demeanour; even as she sits down with her coffee, there is a grace to the movements. This is Elizabeth Gleadle, born and raised in Vancouver but now based in Lethbridge, Alberta. It is there that she trains with Canada’s national javelin team at the National Throws Centre. Currently, she is training back in Vancouver while she finishes her university degree, but it is all in preparation for the Summer Olympics of 2016, in which she not just hopes but firmly believes she will bring back a medal.

“It is not just me that expects the improvement,” she says in her direct way. “The entire Olympic program is based on evaluating each athlete’s potential to medal. If you have it, you continue. If not, well, your time is up.” She pauses, sips from her cup, and adds, “But I am basically at the early stage of my potential. I feel the improvements in technique as we go forward. And results continue to improve.”

Javelin is a popular sport in Finland, but perhaps not the most obvious choice in Canada. “My gym teacher in Grade 8 had the notion that the sport would be a good fit for me. By then, I was really tall, and fairly strong, naturally.” And by fairly, she means really. Javelin is unique, and not only because of the instrument, the spear itself. The athlete needs a sprinter’s ability to develop explosive speed. But she also needs strength, especially “back, shoulders, and triceps,” as Gleadle says. “The entire body is involved in the throwing action.”

Similar to discus or shot put in some ways, javelin requires the spear be released in a specific area, and the athlete cannot in any way break the prescribed lines of containment. The spear itself must also land within a prescribed area. But the run-up is a full 30 metres, and Gleadle says, “Flex and core are crucial.” So speed, strength, and overall agility are all part of the piece. And the acute moment, when the lead leg is planted and virtually the entire body acts as a coil from which the javelin is thrown, “feels something like a car crash at the release.”

Gleadle muses aloud about the sport she loves. “So many things can go wrong, both in the run-up and in the throw itself. It is a highly technical sport. And if you don’t go to the brink and beyond, you never get better.” There is a constant use of film to analyze other throwers as well as yourself. As part of the Canadian Olympic team, Gleadle knows the stakes are high, and with Olympics every four years, the shelf life of a top athlete in this sport is not overlong. Training in such a technical sport is arduous, repetitive. “You can feel the velocity going through your body when everything goes right,” says Gleadle. “Start to finish, a throw lasts 60 seconds or so. The whole point of training is to get as much of the complex process on automatic. You rely on the thousands upon thousands of reps to ensure the throw pops properly.” As for the 2012 Olympics, well, it was a great experience for her. “This Olympics prepared me, going forward. It was the best two weeks of my life. Before that, it was more of a conceptual goal for me, to better my personal best. Now it is extremely concrete. I know it is a sport of very little reward over a long period of time. You have to revel in the little advances.” She is thoughtful about all this, and amplifies her overall perception of the sport. “It is best to buy into the program, embrace the training. It is the only way to get better.”

Part of Gleadle’s athletic gifts is her size and strength, combined with a general athleticism. But, she says, “recovery is an important part of this, too—how quickly and efficiently your body recovers from the stress and strain of the throw itself. It really is part genetic disposition, I think. I am very fortunate to have good recovery ability.”

The International Association of Athletics Federations dictates the rules of the sport and the dimensions of the javelin itself. The men’s javelin is 2.6 to 2.7 metres long and at least 800 grams (28 ounces) in weight. The women’s javelin is 2.2 to 2.3 metres, weighing 600 grams (21 ounces). The IAAF also dictates the throwing technique, unlike the other throwing events. For javelin, a “non-orthodox” technique is forbidden. The runway ends in what is called a throwing arc, from which the throw is measured. No athlete is allowed outside the throwing area until the javelin has landed in the prescribed target area. This is why approach speed and overall core strength are so crucial to the javelin thrower. Distance is generated by both the approach speed and the strength of the upper body, all wrapped in a faultless technique.

Gleadle mentions some of the icons of her sport, athletes such as Andreas Thorkildsen, who was the first male javelin thrower in history to hold both World Championship and European Championship titles, as well as Olympic Gold. The longest men’s throw stands at 98.48 metres, by Czechoslovakia’s Jan Železný. The women’s record, also held by a Czechoslovakian, Barbora Špotáková, is just over 72 metres. Gleadle mentions this almost under her breath, saying only that “it was an epic throw!” This is what drives her to new levels of excellence and performance, but it is never easy. “We break down my technique, then build it back up again. It makes the difference between merely competing, and competing at the high levels”

She finishes her coffee and notes the day has gotten a bit dark, Vancouver’s signature drizzle coming down. As she strides out into the fading light, one thing is abundantly clear: Gleadle is talented, yes, but she is a hard worker, and she is determined. That’s why she will be an athlete to watch when the 2016 Olympics roll around. That podium is a million miles away, but close enough to touch.