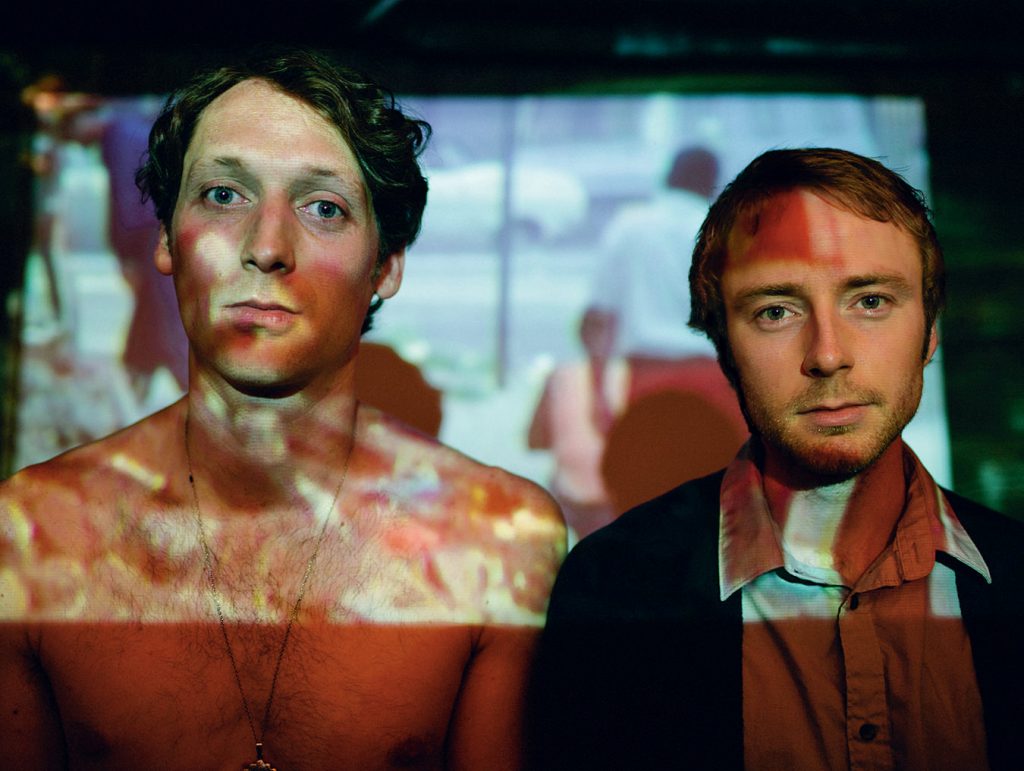 “We’ve got a box of Lucky Charms backstage, and we’re gonna sprinkle it like fairy dust over everyone,” Zach Gray calls into the mic. “Consider yourself warned.” Behind him, a muted light show splashes kaleidoscopic colours while, below him, a sold-out crowd pulsates out of their seats towards the stage.

These days, neither luck nor charm is needed to lure crowds closer to the songwriting duo of singer-guitarist Zach Gray, 30, and pianist-producer Tom Dobrzanski, 31, a.k.a the Zolas. At the Vogue Theatre, backed by local pal-performers Cody Hiles and Parker Bossley, they’re playing their brand of postmodern pop to a frenetic hometown crowd. “When you sell out the venue you sort of grew up admiring, that’s a pretty big deal,” says Gray, reflecting on the performance later over coffee, having traded in his on-stage black skinnies and white knit shirt for an Usher T-shirt and jeans. “The heat gets up so quickly you never really notice where you are, then you look around and suddenly you realize that you’ve passed where you had dreamed you would be.” Where that is, exactly, is traipsing that musical line between local indie-pop sweethearts and a more widespread success. Or, as one YouTube commenter affectionately wrote beneath one of their music videos: “Get famous already godamnit…”

Growing up on Vancouver’s West Side, Gray and Dobrzanski attended adjacent high schools but first became friends, aged 14, when they were placed as roommates on an all-boys choir tour of the Netherlands. They cut their musical teeth with the now-defunct band Lotus Child, of which the Zolas is a four-year-old offspring. “We’re like a Venn Diagram, Tom and I. Completely different people with a sliver of common ground.” Creative decision-making for two can be a difficult endeavour; Gray recalls brokering a deal wherein one of them was granted the duty of naming the band, and the other was tasked with doing the same for their debut album. And so, Gray named the band after 19th-century French writer and philosopher Émile Zola, while Dobrzanski affixed the title of Tic Toc Tic to that first disc.

Today, not only are they cool with the kids, but they’re cool kids, writing songs of lyrical poeticism that can tug at teen heartstrings but that also resonate with emotional intelligence that a wider audience can fall for, too. Often detailing the intricacies of relationships in those lyrics, the Zolas deftly channel many of them into dance-able tunes—no small feat.

Four years have passed since 2009’s Tic Toc Tic, which set the bar high by sweeping Vancouverites off their feet and singing them odes that called out to local hang-out haunts (“I met her at the Biltmore / She was cold and overstyled”) and peppering in the deep stuff, too (“free what you love / ‘cause it’s going to die anyway”). The Zolas’ second studio album, Ancient Mars, was released by Light Organ Records last fall, and singles like “Knot in My Heart” and “Strange Girl” have since climbed charts and charmed hearts of new listeners everywhere, while simultaneously tossing off genre classifications. “I can say “pop-rock” now and I don’t even gag. But, I used to. Honestly, after every show people tell me what they think we sound like, and I always think they’re wrong. Last night someone said, ‘you guys sound just like Tame Impala’—and we do not sound like Tame Impala,” laughs Gray. “And he’s Australian—he should know better.”

The specific Zolas sound is something that local director Kevan Funk and filmmaker Benjamin Loeb set out to capture visually when they created a music video for “Escape Artist”, a song off of Ancient Mars, last year. Taking a narrative approach to a catchy song, Funk and Loeb plant a plot twist along the way in their two-and-a-half-minute video; armed with free creative reign granted by both record label and band, the result benefitted hugely from the breathing space. “If you’re making a film and you have a big team shaping the film to be a certain thing that they all expect it to be—or think it should be—that’s why you end up with the bland Hollywood thing all the time because it’s not the voice of a single person, but the strange voice of many people. You have no real identity or voice of authorship,” says Funk. The final result’s short-film feel gave new identity to the song, and Funk and Loeb have been brought back to mastermind the upcoming video for the title track off of Ancient Mars.

Gray is no stranger to the notion that relinquishing creative control can be essential for strong originality. “It’s such a relief to play music with people that make better decisions than you,” he says. “The secret is to just pick people who are smarter than you or have better taste. You just trust you don’t see what’s genius about it yet, but you will, and it’ll be all the sweeter.”

The same goes for performances that are, in many senses, an act of trust and also of letting go. “You just have to give up and not analyze it. I think about it beforehand, but after the show I know I don’t get to know. That’s the thing: you don’t get to feel the way you make other people feel.” Every now and then, though, the magic happens—and the feeling is mutual. “Sometimes there is a moment on stage where you feel the way the audience feels and you’re all together in one thing. It’s like the simultaneous orgasm of performing that rarely happens,” says Gray. “It’s when you feel you can look everybody in the eyes.”

With thousands of eyes staring right back, maybe there’s something in that fairy dust after all.