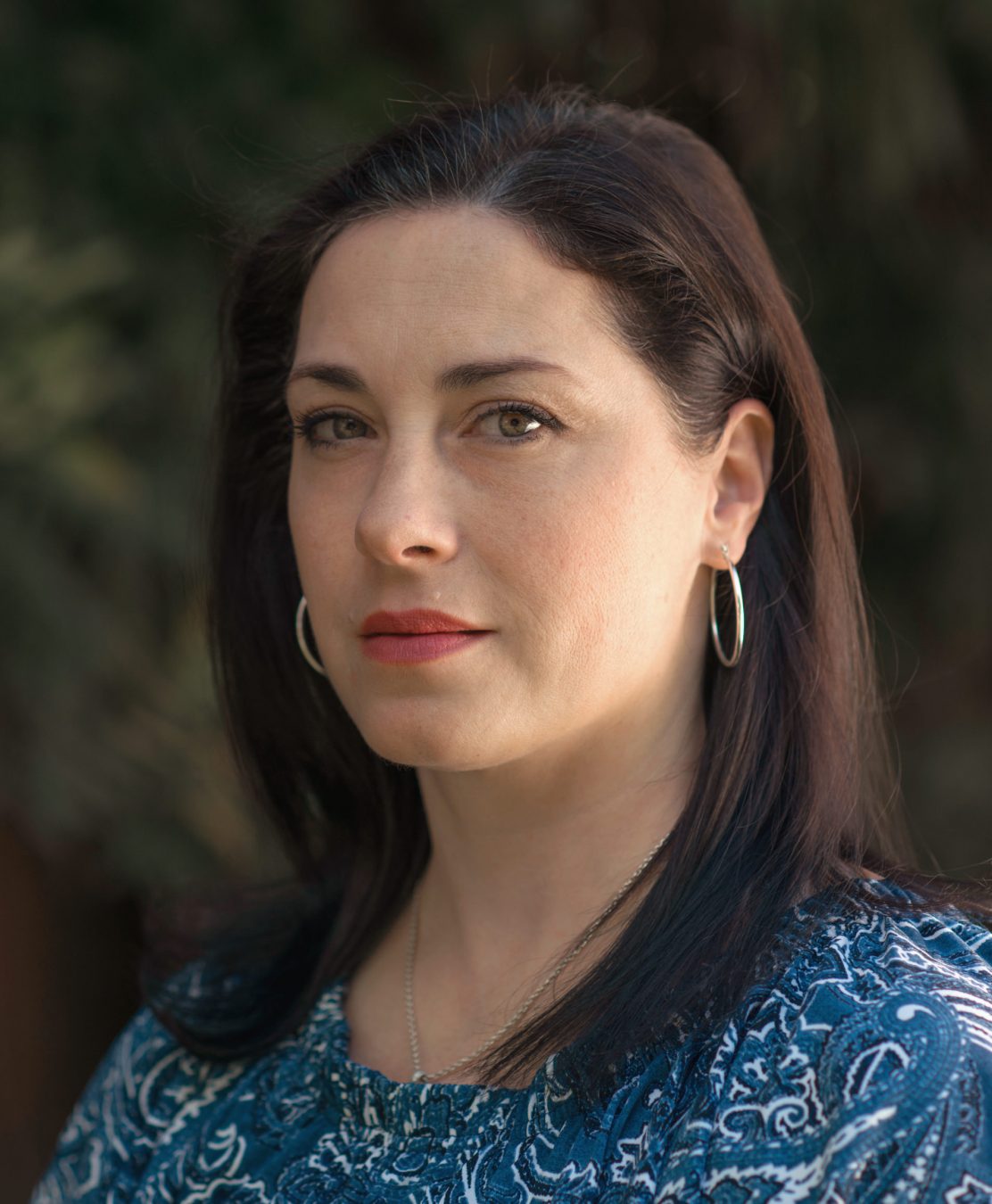 Chevy Stevens at her home in Nanaimo.

It’s a Sunday morning in the early 1980s and a young Chevy Stevens is awestruck as she and her dad step into Munro’s Books in downtown Victoria. For the country girl from a ranch north of the city, it’s like a visit to the Library of Celsus, the Roman Empire building that the stately bookstore resembles. Weaving through the towering stacks, her emerald-green eyes scan the shelves until a cover jumps out at her. After choosing one new book—a big treat for a kid whose collection consists mainly of dog-eared hand-me-downs—she heads out with her father for dim sum in Chinatown.

“Coming here was something special I shared with my dad,” Stevens says today, standing in the foyer of Munro’s, where’s she has come to sign copies of her sixth thriller, Never Let You Go (St. Martin’s Press, March 2017). Her dad, who would read her the work of Rudyard Kipling (The Jungle Book, The Man Who Would Be King), was an alcoholic and abandoned the family when Stevens was 12. A decade later, he took his own life. “I wish he could have seen my books, because he loved reading,” she says. “Even though my dad did some really bad things, I loved him a lot.”

The Vancouver Island author tapped into her feelings for her father when she wrote Never Let You Go, which tells the gripping story of domestic abuse victim Lindsay Nash, who escapes with her young daughter, Sophie. Lindsay’s ex-husband goes to jail, but is free 11 years later and wants his old life back. Alternating between the voices of Lindsay and teenage Sophie, readers gain an intimate understanding of what it’s like to be controlled by a partner and live in constant fear, and how it feels to long for a loved one who has let you down.

When Sophie writes a letter to her dad in jail, Stevens thought about what she would say to her own father. “You’ve missed everything,” Sophie laments. “I don’t even know who you are now.” Sophie’s dad responds, saying he wants to revisit a boat-building project they’d started—something Stevens and her dad also attempted to do together.

Stevens knew she was taking on a big responsibility when she decided to write about domestic abuse, which she does with sensitivity, sidestepping gratuitous violence. “For some people, it could be difficult to read and I wanted to honour that,” she says. “The book is meant to make people think, to get them sucked in, to give them enjoyment, but I’m aware that this is not make-believe—this is really someone’s life.”

While Stevens’s past and the stories she pens are dark, the author herself is upbeat and down to earth. Wandering around Munro’s in jeans and a shirt, she arrives at the section where her collection should be on display, only to find it empty, the books taken down for signing. “As you can see, they’ve sold out,” she jokes. “They can’t even keep them on the shelves.”

In fact, Never Let You Go had the highest first-week sales of any of her books, including her breakout debut, Still Missing. Stevens was working as a real estate agent when she got the idea for that first novel by thinking about all the frightening things that could happen to her at an open house. The scariest scenario she dreamed up became a New York Times bestseller, earning praise from Gone Girl author Gillian Flynn and winning the International Thriller Award for Best First Novel.

Over a pot of chamomile tea next door at Murchie’s, Stevens reveals some details about her next novel. While all of her stories thus far have been set in British Columbia, this one takes readers to Seattle to meet a couple adjusting to life with young kids when a stalker comes on the scene. “I’m a wife and mother now—different things freak me out,” she says. Stevens is also interested in pursuing other genres, and muses about writing something inspired by her grandfather’s book chronicling his experience as a Soviet airman who escaped Stalin by stealing a plane. “A pivotal moment was putting my book, my very first advanced reader copy, next to his book on my shelf,” she says. “It’s still there, along with a photo of him and my dad’s belt buckle that says ‘Chevy.’”

Before Chevy was Stevens’s pen name, it was her dad’s nickname. The moniker is a lasting tribute to the man who nurtured the author’s love of books, but never got to read her work.

Read more from our book features.