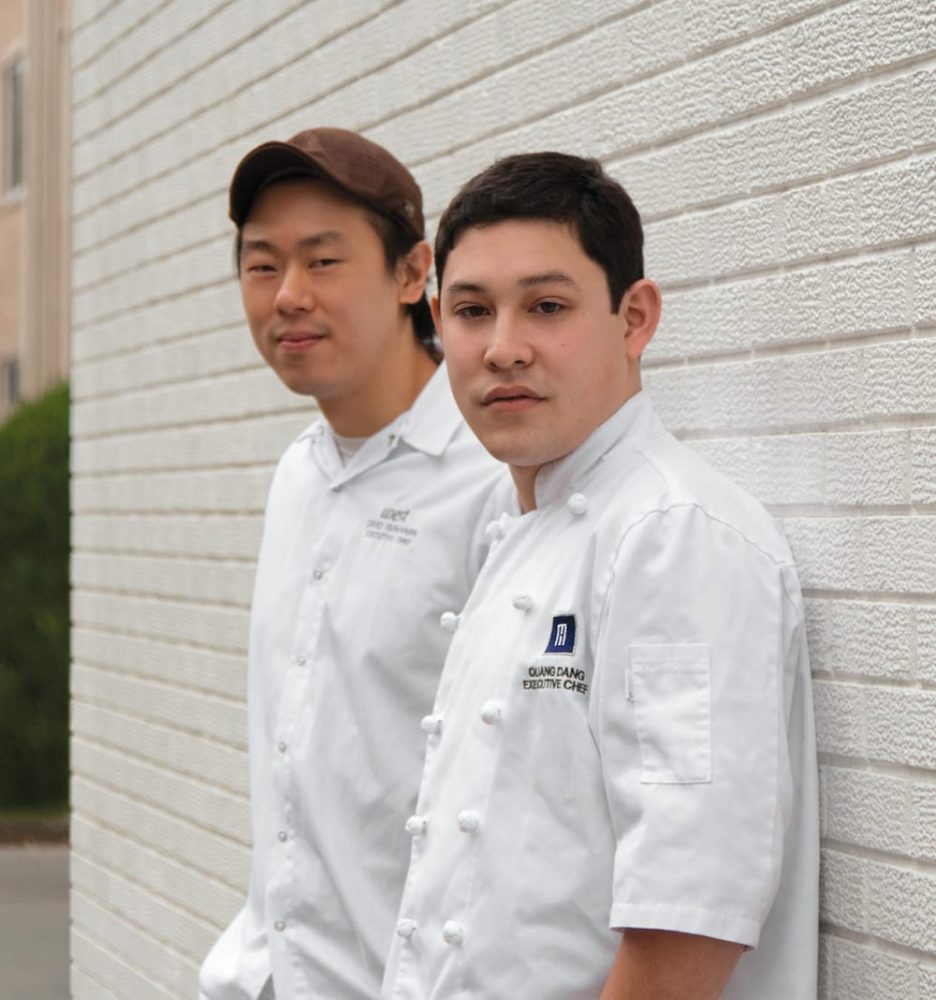 Chefs David Gunawan of West Restaurant and Quang Dang of Diva at the Met.

Harold McGee turned the culinary world on its ear in 1984 with the publication of his seminal tome On Food and Cooking. Considered by countless chefs and food writers to be the modern bible of food science, it offers an unparalleled examination of the chemistry behind ingredients, techniques and flavours. The groundbreaking text inspired a new vanguard of chefs keen on McGee’s technical exploration of kitchen alchemy. Among those influenced by this in-depth scientific approach to cooking are two of Vancouver’s brightest culinary stars, chefs David Gunawan of West Restaurant and Quang Dang of Diva at the Met. Both emerged from beginnings in civil engineering to put their uniquely analytical stamp on West Coast cuisine.

The genuine camaraderie shared by Gunawan and Dang is readily apparent as they laugh over industry war stories. They first met after Dang had transitioned from junior sous chef at West to opening chef de cuisine at Rare. Dang says with a grin, “David just kinda showed up at the back door [of Rare] one day and said, ‘I hear you do good food—can I hang out?’ That was June of 2003 and he’d just moved up here from Seattle. We talked and cooked, went to markets and farms together.”

Dang introduced Gunawan to British Columbia’s bountiful array of regional ingredients; both chefs are passionately dedicated to nurturing ongoing relationships with local farmers and purveyors. “That’s part of the diligence when speaking of local and sustainable,” reflects Dang. “When you see first-hand where products are coming from, when you get out and live a season with a farmer and see how his produce is grown from year to year, you develop a whole new understanding of the fresh ingredient. It’s like rocket fuel for the creative process.”

The young chefs’ common educational background weaves its way through their inherent curiosity and ongoing experimentation with food. Gunawan holds a bachelor of science in civil engineering from Purdue University—no small feat, but he only completed the degree to fulfill parental obligations. “I never wanted to be an engineer,” he confesses. “I went straight into a kitchen right after university and didn’t even attempt to use my degree. But I think that Quang’s and my engineering studies give us a certain edge as chefs. We’ve been exposed to a different part of another profession and it gives us a more analytical perspective, allowing us to step back and figure out how things should be done.”

Both Dang and Gunawan take a playful approach to cooking, but temper their sense of adventure with the utmost respect for balance and finesse. They turn their dishes inside out, experimenting with the minutiae of each flavour component to ensure that the whole surpasses the sum of its parts. “That’s what makes us unique, what distinguishes our style,” says Gunawan. Dang agrees, adding, “Engineers are thinkers—that process never stops. Sourcing the best ingredients translates into less work for us to make food taste amazing on the plate, and we still haven’t visited every farm or tapped the potential of each new ingredient that local producers bring to the table. There’s so much more out there for us to discover.” Terra incognita has never looked so appetizing.

Chefs David Gunawan of West Restaurant and Quang Dang of Diva at the Met.