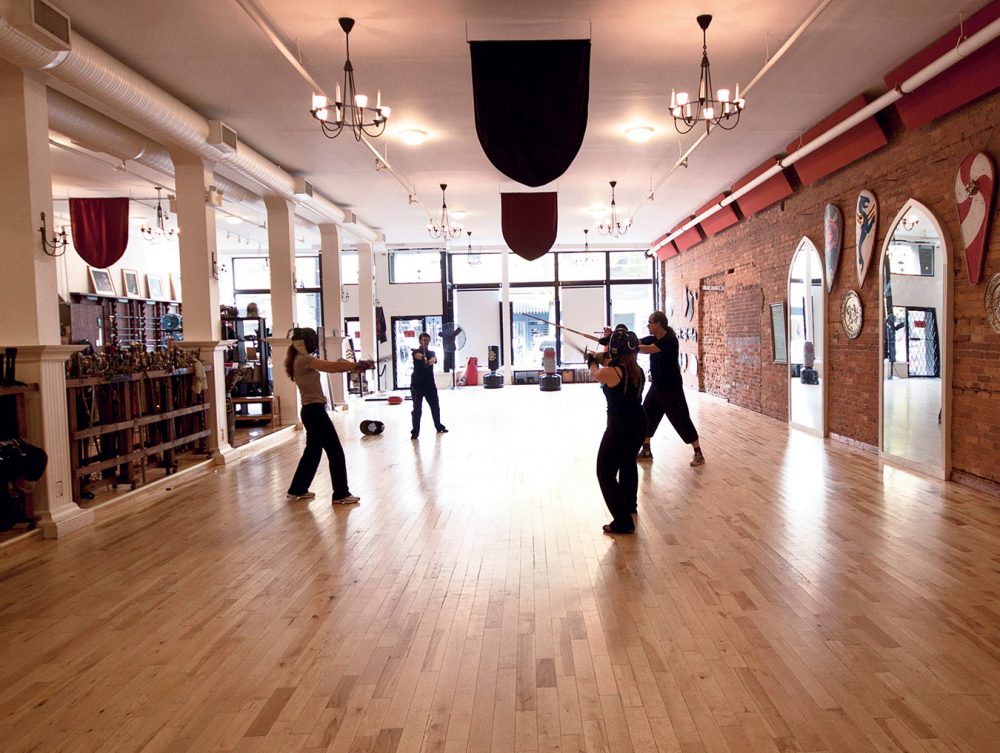 Devon Boorman is a Renaissance man, in every sense of the word. He is a musician, historian, and consultant, amongst many other things, but perhaps most significantly, he is a maestro d’armi and the director of Academie Duello, the largest centre of Western martial arts in the world, where people of all ages come together to study the knightly arts, including swordplay, archery, and mounted combat.

With Zorro and the Three Musketeers as his childhood heroes, Boorman became enamoured with swordplay as a kid, and his fascination hasn’t waned since. “There’s a noble mystique to it,” he explains. “The duelling arts were practised by gentlemen. There’s an ideal around it that’s to do with defending your honour and being an upstanding individual.”

Because there was a dearth of fencing programs in the Lower Mainland while he was growing up, Boorman practised several Eastern styles of martial arts instead, including Kenpō and Arnis. Finally, at 15, he got his first taste of European swordplay. Held in an underground parking lot, the informal fencing classes were put on by the Society for Creative Anachronism, a group dedicated to reviving the arts and skills of pre-17th-century Europe.

Boorman followed this passion with great gusto, attending workshops and seeking out experts around the world. Fully immersed in the field, he also began collaborating with translators and doing work in experimental archaeology—decoding actions described in old manuals, testing manoeuvers in a real match, and evaluating their functionality.

Meanwhile, Boorman had been working in leadership coaching, but it was time for him to walk the walk. Academie Duello’s first rapier classes were held at the Robson Square in 2004. Class sizes swelled rapidly within the first year and a half, and to accommodate the equipment-heavy sport, Boorman began looking for a proper space for the school. Academie Duello spent three and a half years at its first permanent location, before moving in 2009 to its present home on West Hastings, complete with a museum and an arms and armour store.

Academie Duello’s core program is developed from Italian martial traditions beginning in the 1400s with Fiore dei Liberi’s techniques in longsword and grappling, and incorporating the teachings of Salvator Fabris and Ridolfo Capoferro, masters of the rapier in the 1600s. As Boorman explains, swordplay is not just a dashing sport but a very engaging activity. “It has an imaginative and creative side as well as an intellectual side. It’s beautiful and graceful, but also very cerebral. Historically, especially during the Renaissance, because it was a noble art, it was practised by learned people. Trattato di Scientia d’Armeby Camillo Agrippa, published in 1553, has a whole section on celestial movements—how celestial bodies are bound by physics and how it relates back to fencing,” he says.

“It’s a martial art with a rich history, but we’re not recreationists. We’re not trying to pretend we’re in the past—we’re practising now. … We’re modern people doing this.”

Courses that exercise medieval skills, including archery, mounted combat, and armouring, are also offered, as well as lessons in stage combat for thespians. Bartitsu, or the Victorian gentleman’s art of self-defence, is another popular program at Academie Duello. Developed in 1898 by Edward William Barton-Wright, the mixed martial art fuses jujitsu, English “scientific” boxing, and French savate together. Bartitsu was also known for its cane-fighting techniques, which turned a staple of fashion into a deadly weapon. Naturally, this has been adapted for our rainy city in the school’s “Umbrella Self-Defense” workshop. Academie Duello also offers intensive focus classes, including the playfully named “Poleweapons: Deceptions, Close Plays, and Nasty Business”, where pupils “learn how to deceive, mislead, and invite opponents to their folly.”

Academie Duello also has “Knight Camp”, an interactive summer program for kids. Children are introduced to the knightly virtues such as integrity, humility, generosity, and fairness, which they’re also encouraged to practise in their everyday lives. They learn about history, heraldry, and the development of warfare, and receive lessons in swordplay and armouring.

While a room adorned with swords and armour and full of people duelling, grappling, and twirling quarterstaffs may appear entirely anachronistic, Boorman has a brilliant riposte to the matter. “We’re practising in a modern context,” he explains. “It’s a martial art with a rich history, but we’re not recreationists. We’re not trying to pretend we’re in the past—we’re practising now. In the same way that some forms of karate have a rich history, when you go to a [dojo], you’re not pretending to be in ancient Japan. And so, it’s the same thing here. We’re modern people doing this.” To impress his point, Boorman adds, “The other thing that I love about this being a modern thing is that women get to do it. We have lots of women in our programs—I think it’s because swords are a great equalizer.”

Academie Duello is devoted to the study and practice of an art form, but also connected to passion and maintaining a posture of honour; respect for the weapons and martial systems themselves is just as important as respect for the self and others. Or, in the three Middle Italian words of their motto: Arte, Ardore, Onore.