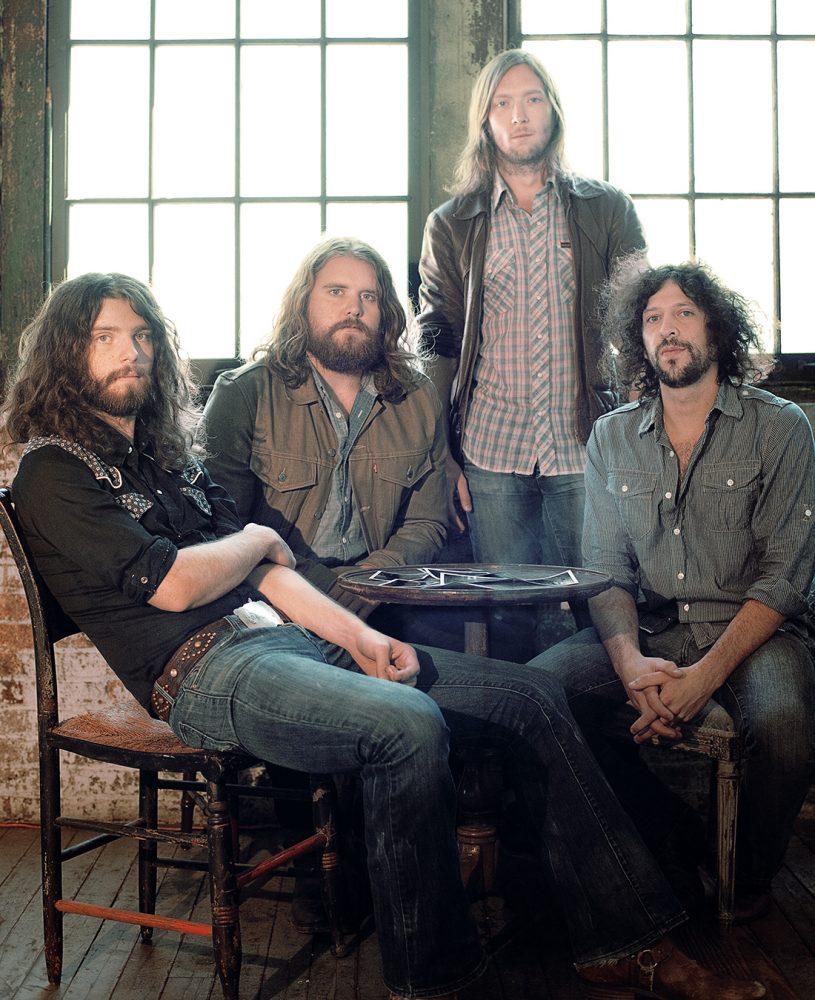 Early summer, 2011. Rolling Stone magazine and Late Night with Jimmy Fallon, with assorted adjunct sponsors, run a talent show. Down to the final two acts, Fallon introduces one of them as “From Saskatoon, Canada—the Sheepdogs!” They win, go on the cover of Rolling Stone, get a recording contract with Atlantic Records. Surreal, and then some.

It turns out, says the Sheepdogs songwriter and lead singer Ewan Currie, that “we all started as a bluesy rock and roll outfit about eight years ago, at a talent contest in Saskatoon. So there’s a nice symmetry to all this.” He smiles, both hands on his cappuccino. All six feet, three inches of him, copious beard and mountainous mane of hair making him even taller, bigger. But in fact he is a soft-spoken, articulate musician, who knows a lot about the musical progeny he is, and from whence it was spawned.

“I grew up listening to Stevie Wonder, Chicago, CCR, Elton John. My dad is a musician, a classical composer, and that influenced me a lot. I was a clarinet player in a concert band, actually.” He pauses, smiles again, looks over the table, and says, “I guess there’s no such thing as useless musical information or training.”

The Sheepdogs have played three times in Vancouver since the big win and the cover of Rolling Stone. Once was to open for Kings of Leon, which Currie describes as “a whole different level of demand, expectation. Fun for us, for sure. We toured across Canada with them, and got a new understanding of how it works at that level.” But, this is a once-in-a-million thing, he acknowledges. “Oh, all of us know that, grab it every day. There are a lot of bands out there, and how many get the opportunity we have? So we appreciate it every day. This touring thing is hard work, but we love it, and we’ll make the most of it.”

Musically, there is a bit of an eclectic element, some pop sounds, some musical suites à la Chicago III, and some power chords infusing blues tunes. The Sheepdogs, thus, on record at least, are a rootsy band with some melodic prowess. Live, they are, yes, a different animal. The Who album Meaty Beaty Big and Bouncy is a good place to start, but the Sheepdog look is much more Creedence Clearwater Revival, Cosmo’s Factory. Put it all together, for example in a sold-out Commodore Ballroom, and you have something more akin to Crazy Horse, with Metallica and Sam Roberts somehow floating around.

It is a massive, heavy sound, and the crowd is loving it all, swaying, bouncing, weaving (maybe that was me, actually) and in step with the band all the way. Second song in, Currie is working though the guitar intro, the song recognized by the room, and he looks up, smiles, and shouts, “It’s Tuesday night! And we’re going all fucking night!” And they do. It is raucous, sometimes a bit ponderous—what with the guitar solos—but this band loves what they are doing, sharing their music.

“The live shows are fantastic, and we sometimes actually mould the new songs by performing them for people,” says Currie. “Writing songs, though, is usually me bringing in some chords, words, and a structure, and the band works it through, to a full song.” And the studio? “I love the studio. It is probably my favourite part of this whole thing, taking good songs and working with that in a studio to get the most out of it.” Part of the reward from all this attention is that they are recording their new record in Nashville. And not just at any studio, but that of Sleater-Kinney and Yo La Tengo producer Roger Moutenot, with the Black Keys’ drummer/producer Patrick Carney at the dials. “Well,” says Currie, “it seems like a really good fit.”

It does. And as Currie walks toward his bandmates sitting around on the nearby tour bus, what you see, charmingly and indelibly, is a rock star in the making.