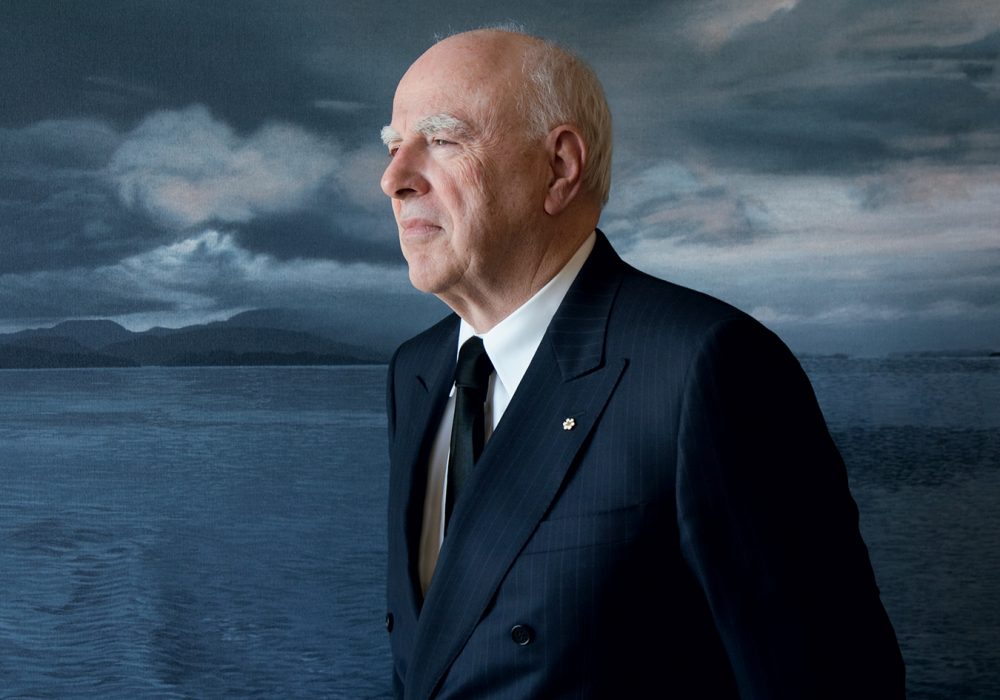 There’s a distinct British inflection to Michael Audain’s voice. His semi-Canadian accent hints at time spent all over the globe, and though his voice isn’t too loud, and his words not too fast, you’ll want to listen closely to just about whatever he has to say. Audain could probably garner respect based on his speech pattern alone, but as chairman of Vancouver development company Polygon Homes, and an important philanthropist to numerous Canadian arts organizations, he receives it—boundless and warranted—by many means other than that perfect pitch. Audain is a long-time builder of spaces big and financial successes bigger, and his fingerprints are scattered across many facets of the city he calls home.

Although born in the United Kingdom, Audain was transplanted to Victoria, B.C., at the age of nine, back to a place where his lineage has long endured; Audain’s grandchildren are the seventh generation to have lived in British Columbia. Audain himself has since spent a life “bouncing around” cities worldwide, but now settled in Vancouver, he considers himself “very, very fortunate to be able to live here and to also operate a business here.”

It’s easy to think that the 74-year-old developer’s landscape of choice would lie wholly in the city’s skyline carved out by glass, but there is another series of landscapes that is arguably closer to Audain’s heart: the wild shores, old growth forests, and natural habitats of the West Coast that are painted onto the canvases of the large private art collection he shares with his wife, Yoshiko Karasawa.

“A lot of collectors start off thinking they’re going to be artists, but I never had that illusion,” Audain explains, loath to call himself a curator. “I just admire artists for the tremendous challenge that they have—to create something new that hasn’t been created by someone else before, and also to reflect the concerns of the day in which they live.” The Vancouver Art Gallery recently filled two floors with a portion of his collection for “Shores, Forest and Beyond: Art from the Audain Collection”, an exhibition curated by Ian Thom and Grant Arnold. The exhibit, which wrapped on January 29, revealed an unparalleled breadth of work. Pieces by Bill Reid, Jack Shadbolt, and Gathie Falk joined works by Jeff Wall, Ron Terada, and Lawrence Paul Yuxweluptun, along with Mexican modernist paintings by Rufino Tamayo and Diego Rivera, among many others.

At first, Audain was wary of the public showing. “We’ve never done that before, and it was Ian Thom who persuaded me to do it. Yoshi and I talked about it for almost a year.”

Thom cannot hide his admiration for Audain’s collection, let alone underscore the importance of it. “His collection of 19th-century West Coast First Nations’ masks is probably the largest in private hands, anywhere,” he says. The curation process could have been an arduous task if saddled with restrictions, but Thom was given entirely free rein. “They let me into their home and basically said, ‘take whatever you like’”.

Audain has an end goal in mind for all of his art. Donating it—something he does constantly—is at the top of that list, but the fate of the masks is something he is especially passionate about. “I’ve been trying to repatriate some of the work that left the coast in the 19th century,” he says. “Now, it will stay here. It will never, ever be resold. It will eventually end up in public collections in B.C. I will make sure of it.”

On a slightly different track from his career as a developer, but made possible because of it, is Audain’s well-documented philanthropic role in the B.C. arts scene. He serves as chair of the Vancouver Art Gallery Foundation, the Audain Foundation for the Visual Arts, and the National Gallery of Canada, and has been awarded three honorary doctorate degrees. He has also been appointed to the Order of Canada and the Order of British Columbia. Numerous organizations have benefited from his support, and over the years, the Audain Foundation has given more than $30-million to visual arts institutions throughout the country.

Audain’s current views shed a positive light on Vancouver’s thriving arts community, but he stresses the obvious—that arts organizations cannot do it alone. “A city’s success is intrinsically tied to its industry, transportation, economic growth, tourism draws, and having a creative pool of talent. I think people in Vancouver, and the city itself, are generous to arts groups and are generally very supportive, even though budgets are tight. But an area where there needs to be growth in support is with the provincial government.” It’s a battle cry heard often, but Audain’s words hold weight because he practises what he preaches.

New spaces to house the cache of important artworks in the city’s possession are high on his agenda, including the development of a new Vancouver Art Gallery space. Its future home is destined for a block of downtown land on Georgia Street, and Audain is “hopeful that in the not-too-distant future we will be able to move ahead on a new gallery, because the city certainly deserves it.”

In 2009, the Audain Foundation for the Visual Arts gifted $2.5-million to the Museum of Anthropology at the University of British Columbia (UBC), a donation that made complete sense given Audain’s passion not only for the museum’s contents but also for the work of the building’s architect. “I was a friend of Arthur Erickson, and of course I’ve had a long-term interest in the art of the Northwest Coast and the art of the First Nations people here. That’s where you see some of the best of it,” he says. He also has a deep, obvious appreciation for his alma mater. “I guess I could say that until I got to UBC, I never really had a sense of happiness in my life.” And when asked why: “For one reason or another, but partly because I never was achieving anything. I started to achieve at UBC.”

As Audain sits at a desk in his office, the afternoon light sets his picture windows aglow, and he looks north beyond the canvas of city below him. “You know, big bad developers are filling in the skylines,” he says, a hint of smile. “But at least we can still see the mountains.”