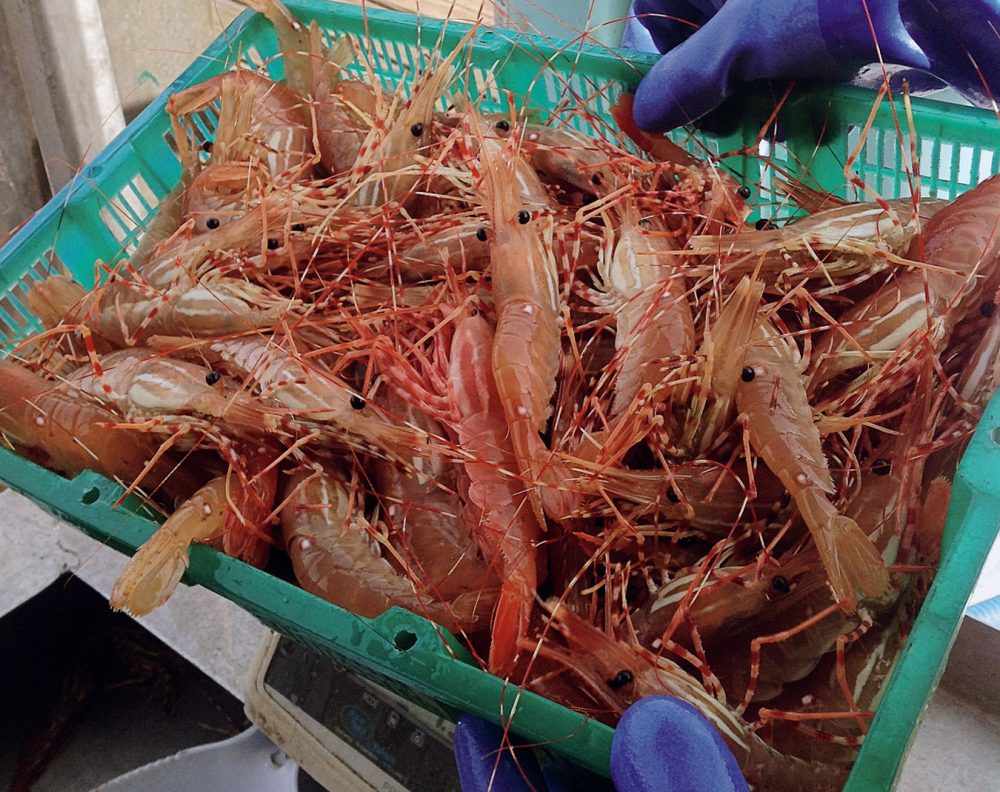 It’s 6:00 a.m. on a clear May day. A flurry of activity at the False Creek Fishermen’s Wharf breaks the early-morning tranquility as Steve Johansen and the crew of Organic Ocean I prepare to cast off. Matcha latte in hand, Johansen pilots his fishing boat beneath the Burrard Street Bridge past a still-sleeping city into the Strait of Georgia. Destination: the glittering waters between West Vancouver and Sechelt where 300 prawn traps have been soaking overnight, now filled with pearlescent white-spotted denizens of the deep. During the six- to eight-week spot prawn season running from May through the first week of July, Johansen and crew will pull in hundreds of pounds of sustainably caught B.C. spot prawns each day.

Ironically, these meaty, succulent crustaceans were markedly absent from Vancouver’s kitchens until about six years ago. “For years, 90 per cent of our local catch was exported to Japan,” explains Johansen. “Most people had lived here for their whole lives without ever having tasted a spot prawn.” Counterintuitive but true. A remarkably rich, productive spot-prawn fishery lay only eight kilometres from the downtown core—the ne plus ultra in locavore dining—yet most restaurants and seafood purveyors sold only tasteless black tiger prawns from Asia, farmed in toxic chemically laden breeding ponds with little to no regard for environmental impact. But a prawn fishing expedition with chef Robert Clark of C Restaurant in 2006 was the fortuitous catalyst for much-needed change.

Together, Johansen and Clark championed the indigenous crustacean’s cause. They approached the Chefs’ Table Society of B.C. and conceptualized the first Spot Prawn Festival to both celebrate and educate the public on the bounty of our local waters. The event has grown by leaps and bounds since its inception six years ago. This year, Organic Ocean I’s May 5 arrival at Fishermen’s Wharf heralded the start of a new season, and it was celebrated with Canada’s largest spot prawn boil yet, feeding over 1,200 eager diners.

“The fishing methods that my partner Dane and I have been using for years haven’t changed,” notes Johansen. “We’ve always been sustainable. We’ve always used a hook and line to catch salmon and long-line traps to catch prawns. But until the word ‘sustainability’ became a popular catchphrase, we were just fishermen.” Johansen is one in a long family line of seafarers, and the time-honoured rhythms of the fishing seasons ebb and flow in his veins like the tides. The end of spot prawn season certainly doesn’t signal vacation time, though. “We serve 57 beer-free days of what we affectionately call ‘prawnitentiary’,” he jokes. “Then we’re out on parole for about 10 minutes before we roll directly into salmon, halibut, and lingcod fishing.” Johansen’s salmon of choice: ivory spring, a white-fleshed type of the ruby-fleshed chinook. “For years, they were never appreciated because of the colour of their flesh,” he explains. Yet this rare variant is now greatly prized by sport fishermen and seafood aficionados alike. Ivory springs are rich in omega-3 fatty acids with the highest oil content of the five salmon species. Ideally grilled to a perfect medium rare, their firm flesh is silky, buttery, and delicately flavoured.

Over the past five years, Johansen has noticed a definite attitude shift. More and more people are seeking a conscious connection to their food and where it comes from. He willingly shares credit with the Ocean Wise program and “a small core of chefs that has always believed in it and pushed it,” but Johansen himself works tirelessly to raise local awareness with purveyors, chefs, and the buying public on sustainable seafood and how it’s harvested. “I used to get pissed off with people who adopted sustainability as a trend,” he admits. “But then I realized that taking the first step is the important part. It’ll take the whole world to change what we’re doing for our oceans.”