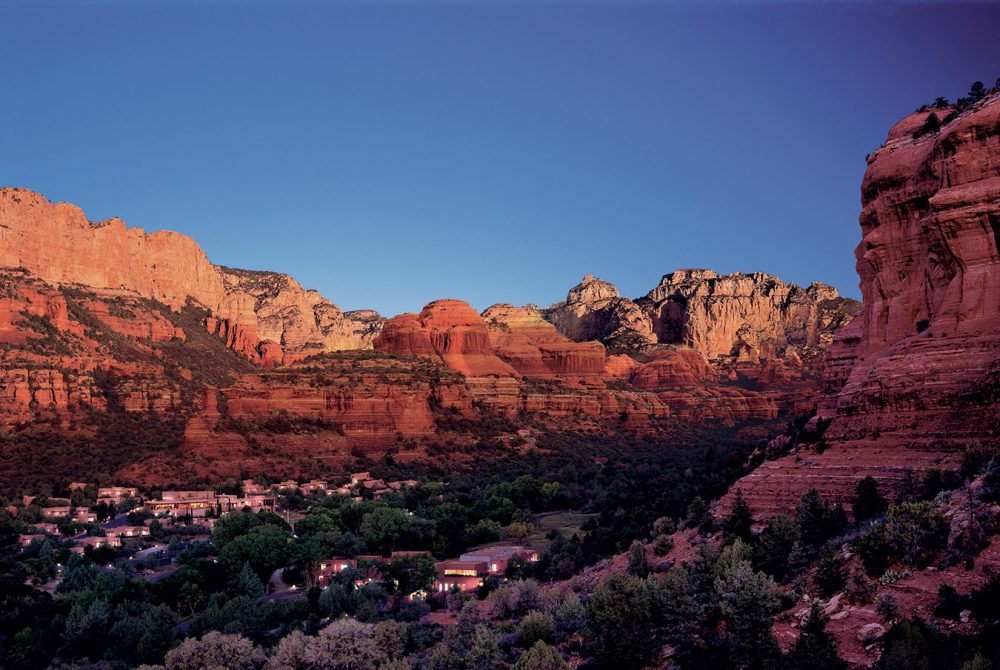 Arizona is a surprising place. Yes, it’s home to one of the Seven Natural Wonders of the World, but it also contains a Mayo Clinic, one of Boeing’s major production facilities, and the headquarters for Fender guitars. There’s the town of Carefree, with felicitous street names such as Rocking Chair Road, Nonchalant Avenue, and roads Ho and Hum, which connect at Ho Hum Drive. Not to mention, of course, the City of Surprise.

There’s also an astounding geographic variety in Arizona: hot, punishing desert plains, vast grassy valleys, sparking lakes, and soaring mountain ranges. The days are clear and balmy, while the nights are starlit and cool. So perhaps unsurprisingly, Arizona is a wonderful place to be active. During the summer, when the heat reaches overwhelming temperatures, full- and part-time residents make an exodus to their favourite watering hole—one of 150 lakes, that is. Try to spot a vehicle without a Jet Ski or pleasure craft in tow.

One of the world’s most verdant deserts, the Sonoran, stretches across the southwestern corner of the state. Scottsdale’s McDowell Sonoran Preserve consists of 21,400 acres (and counting) of protected land, and with 161 kilometres of hiking, biking, and equestrian trails, this glorious desert landscape is immediately accessible. Take the snaking trail up to Tom’s Thumb, a 140-foot granite spire at the northern end of the McDowell Mountains. Dotting the landscape are the magnificent saguaro cacti, native only to the Sonoran Desert. Because saguaros are extremely slow growing—appendages don’t appear until they are more than half a century old—they are protected by law. For a more enriching experience, have a guide accompany you as you traverse the landscape. Seduced by local lore, you’ll reach the zenith in no time, with a stunning view of Scottsdale and Phoenix sprawled before you, and to the east, Four Peaks. As the story goes, Eleanor Roosevelt renamed the formation upon learning that it was called Los Dos Chichis, or “the two tits” in Spanish.

Activities certainly don’t cease when the sun goes down. At the Boulders Resort, opt for a stargazing session or a bicycle ride by moonlight and watch the desert as it is animated by night-vision goggles. Deer spring to life, owls take flight, javelinas graze, and coyotes move furtively. The Boulders in Carefree, Arizona.

Venturing into town, there is also much to experience. One very unexpected find is the Musical Instrument Museum (MIM) in neighbouring Phoenix. At first it may seem entirely ordinary and even cheesy, but boasting a collection of some 15,000 instruments, the MIM is no humble museum. Visitors don wireless headsets and float from display to display in a musical immersion.

In Scottsdale, Old Town is quaint and very walkable. Part of a 30-year-old-tradition, the district’s art galleries and studios open late every Thursday to entertain locals and tourists alike. Street musicians abound, and the atmosphere is lively. With over 100 eateries, you won’t be starved for choice, but plan to dine at FnB and prepare to be entertained. The charismatic and silver-tongued Pavle Milic is a most gracious host—you’ll feel like a regular in no time. The open-kitchen concept means you can sit at the bar and watch chef Charleen Badman prepare rustic, comforting American eats like braised leeks in lemon and thyme topped with mozzarella, mustard bread crumbs, and a fried egg; roasted carrots with chestnuts, green garlic, and pecorino; and lamb tenderloin with red chermoula, cauliflower, fregula, and dates. Share the dishes alla famiglia style and your meal will become a true feast.

Scottsdale takes pride in calling itself “the West’s most western town”, and there’s no better way to experience that than to spend an evening at Greasewood Flat. Here, you’ll find old Arizona in all its glory. The site was established in the 1880s as a stagecoach stop between Fort McDowell and Phoenix, and Greasewood Flat is housed in the original bunkhouse, over 120 years old. Order a beer to go with the melt-in-your-mouth burgers and mingle with the locals, cowboys, bikers, and tourists at the communal picnic tables, which seat a crowd and more. At this backyard-barbecue-meets-outdoor-saloon, there’s live music that no one is too shy to dance to.

Indeed, there is something alluring here, something that beckons vacationers to become habitués. Case in point: this is where Frank Lloyd Wright, an ardent lover of nature, built his winter home. “Taliesin West is a look over the rim of the world,” he wrote, finding nourishment in the site for both living and learning.

A quick jaunt to Sedona, only two hours away by car, is a must. There is an old saying among residents: “God created the Grand Canyon but he lives in Sedona.” Have chewing gum on hand as the drive will lift you nearly 1,000 metres higher, delivering you into Red Rock Country. These majestic sandstone formations—towering spires, knobby buttes, and outstretched mesas—are ablaze in red and radiant orange, especially when kindled by the rising or setting sun.

Make it a spa retreat and stay at Mii amo at Enchantment Resort, nestled into dazzling Boynton Canyon. Long considered a source of spiritual inspiration by local tribes, Boynton Canyon is a magical place—whether you’re a believer of vortexes or not. It’s breathtakingly beautiful and peaceful, ideal if you’re seeking wellness, or just wanting to unwind. Pamper yourself with the mineral-rich Sedona claywrap or the signature blue corn body polish.

While you’re at Enchantment, join Diné (Navajo) elder Bob Bear on a medicine walk. Meandering around the resort grounds, he’ll talk leisurely about life, and the way of the world. Adopt an unhurried pace and listen carefully—Bear speaks just above a whisper.

If you’re not already charmed by Sedona, go for a romantic dinner at L’Auberge, which has the city’s only creekside dining patio. Enjoy Mediterranean-inspired American cuisine alongside Oak Creek while sunlight filters in through a canopy of cottonwood and sycamore trees.

As you depart, do a quick drive-by of the McDonald’s on Highway 89A for a last bit of sight-seeing: the only teal arches in the world. Even the fast-food giant is not exempt from the Sedona’s strict regulations regarding the city’s prescribed colour scheme.

Now, all you have to do is plan a trip back to visit the Grand Canyon.