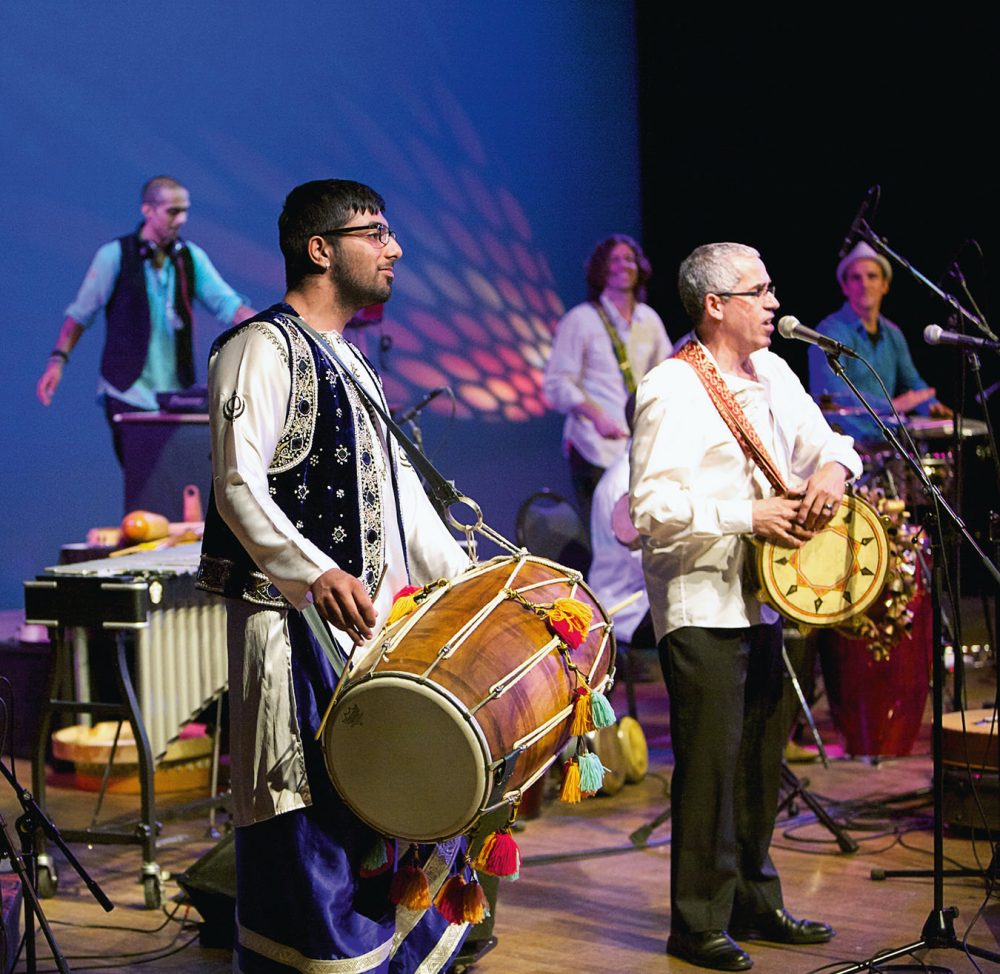 Sal Ferreras (right) performing at rePercussion at the HSBC City of Bhangra Festival.

Sal Ferreras is a man on a mission. Well, he is on two missions. One is as one of North America’s pre-eminent percussionists, wrapping his playing seamlessly in with his teaching and mentorship roles. The other is, as his current title has it, Vice-President, Education, at Vancouver Community College, in which role administration and, yes, politics, are the lay of the land.

These two aspects of his professional life, one of which is enough for most folks, are, to him, not in any way incompatible. The opposite, in fact: “It is all about the transfer of knowledge. As an artist, you manage people’s expectations all the time. As an administrator, you do that every single day.” So, whether it is in a small salsa band, or in a departmental meeting, conflict resolution, and finding positive ways to proceed, are the twin orders of the day. “Whether it is a meeting or a concert, it is an experience. Flux is a kind of norm for me.”

Ferreras pauses, sips that latte now 40 minutes old, and says, with some gravitas, “I was ambitious, even from the time I was still a punk. Then, I met my wife. And that relationship created a secure place, from which I could embrace other cultures, influences, ideas. To be a player in our society means, for me, being willing and able to look through different lenses, participate in different cultures.”

From that “safe, central core” of his life, Ferreras is able to go out and explore. “I think about such things as, what art means to a society, and given where we are now, where do we go as a people.” Within that framework of big thinking and grand ideas, is the ground where he does his work, and it is an impressive list of accomplishments, this far into his career. “It is about managing people, putting something together that will work for everyone. For me, the music, the admin work, it is all an extension of the same thing.”

A small part of that list: tours, as a musician, to Portugal, Germany, Taiwan, China, Australia, the United States; artistic director of the Literary Cabaret at Vancouver International Writers Festival (in which he takes samples of written works, and sets them to original music, played while the writer reads the text); former dean of the VCC’s Department of Music; holder of a PhD in ethnomusicology from the University of British Columbia; recording appearances with a wide variety of performers; three solo recordings. And we do mean, a small part of the list.

Percussion, and by extension music, is perhaps what defines him most acutely. “Creativity and fearlessness go together,” he says. “You just need to find clear ways to sustain it.” One of his touring bands, Safa, is a Persian-based trio, and another, is a Latin-American based trio called the Southern Cross. For him, “Music is not so much genre-based, but about good musicians playing together. A note on a drum, the swish of a cymbal, it is all part, though a small part, of working the infinite.” He pauses again, and adds, “I remember having a bit of a revelation once, while riding the number nine bus. It was a rainy day, and I was up near the driver. The wipers were working to keep up, and I just started keeping that rhythm with the wipers. I thought of timing differently, then, as part of something bigger, but also as something that is simple, and comes out of every day experience.”

The early parts of Ferreras’s career were, as he puts it, “full of huge leaps for which I was unable to prepare.” But, there has always been that drive, and work ethic, so he met the challenges as his music and then academic careers advanced. “I think, in retrospect, I was exposed often, to things that I had to work hard to accomplish.” So, the fairly rapid leaps, from music instructor, to dean, and then to VP education, came about as part of his desire to make a difference in the world he, his wife, and his two children, live in.

“The education system, as a whole, is in the process of transformation. How we teach, is changing. How we manage the entire system is changing. I think, overall, for the better, but it is a gigantic, and necessarily slow, process.” Still, in his mind, it is a revolutionary time, in which it more important than ever to actively participate. “I don’t feel at all like an outsider, some artist on the fringe. It is all part of the same process, sharing knowledge, helping shape the future in a good way.”

So. Ferreras reaches students, teachers, other administrators every day. He reaches avid audiences each time he performs, or one of his recordings is heard. That makes it, overall, quite a substantial reach for one individual to achieve. Still, at the end of the day, it is not legacy he has on his mind. “What I can say for sure, is that, when I leave the stage with a full heart, I know the performance has been good. That is a privileged place to be.”

Listen and watch Sal Ferreras as he explains and demonstrates how percussion springs out of every day experiences.